Cleveland Clinic Children’s new outpatient center was designed with one goal: to make a doctor’s visit just a little bit easier for young patients and their families.

On Sept. 14, more than 250 supporters, guests and caregivers gathered to celebrate the center’s official opening.

“The inspiration behind our new building was influenced by the belief that ‘Little Matters,’” Rita Pappas, MD, Interim Chair of Cleveland Clinic Children’s, said in her remarks. “This means that world-class care and patient-centric convenience should live under one roof.”

Tom Mihaljevic, MD, CEO, President and Morton L. Mandel CEO Chair of Cleveland Clinic, recognized the role of philanthropy in helping to fulfill these ambitious goals. “Through your generosity, you collectively gave us the opportunity to add elements to enhance the overall experience for our families,” he said as he acknowledged contributors who attended. “As you walk around today, I hope you are as proud as we are of the role you played in making this project a reality. You, too, are caregivers. Thank you.”

Eleven-year old Cleveland Clinic Children’s patient Daniel Melaragno welcomed the crowd and introduced Dr. Pappas and Dr. Mihaljevic. “It was nerve-wracking, but once I was up there, I was fine,” he said afterward. His favorite part of the new building is the interactive wall of monitors that looks like swirls of multicolored paint, serving as a fun and soothing distraction for kids and their families. “It’s cool,” Daniel says. “When you move a part of your body, it moves with you.” 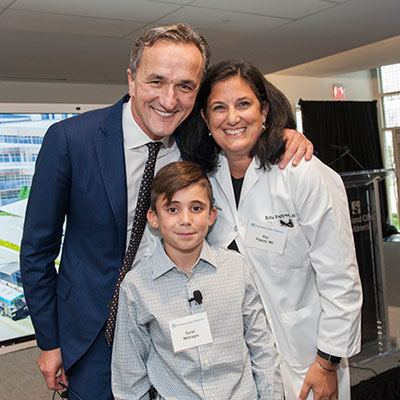 Following the ribbon-cutting, guests enjoyed refreshments and self-guided tours of the building.

The three-story facility, which formerly housed the Taussig Cancer Center, was completely renovated with a focus on children and parents:

In her lab at the Lerner Research Institute, Dianne Perez, PhD, was surprised to find that a compound she was developing to treat a particular type of heart disease also showed benefits for cognition, learning and memory.

Dr. Perez, in the Department of Molecular Cardiology, had spent nearly three decades researching a drug for cardiac ischemia, which causes reduced blood flow leading to a shortage of oxygen to the heart. The drug’s unexpected effects on the brain may have implications for Alzheimer’s disease.Recently, the Alzheimer’s Drug Discovery Foundation (ADDF) and the Harrington Discovery Institute gave her the ADDF-Harrington Scholar Award for her promising Alzheimer’s research. The award provides up to $600,000 in project funding over the course of two years.

She is investigating the cognitive effects of a drug that would imitate and amplify the behavior of a subset of a class of molecules called G-protein coupled receptors (GPCRs). Her focus is on a particular type of receptor that binds to specific neurotransmitters and causes blood vessels to narrow, blood pressure to increase and the heart to adapt to damage.

She found that having too many of certain receptors causes seizures, vascular complications, cell death and neurodegeneration. However, an abundance of one type of receptor has major protective benefits for both the heart and brain. She learned that these receptors protect the heart, contribute to greater longevity, reduce cancer risk, improve cognition, and enhance learning and memory. In addition, they increase brain plasticity – the ability to form new neurons in the brain and the connections between them. She concluded that this particular class of receptors could be effective in treating Alzheimer’s.

Dr. Perez now is designing a smarter drug to separate the cognitive benefits from the harmful effects on blood pressure observed in patients who initially had normal blood pressure. She and her team have synthesized what they call “compound 3” to do just that. She found that this compound has desirable effects on learning, memory and brain cell function but does not raise blood pressure, and now is testing its effectiveness for Alzheimer’s.

The foundation’s award provides funding for two years, but philanthropic gifts still are needed to help Dr. Perez learn more about the drug and its eventual implications for patients. She is seeking ways to optimize the drug before taking it to the next level, which would be clinical trials.

Your gift to Cleveland Clinic helps to advance innovative research like Dr. Perez's and we're grateful for your support.

A Cleveland Clinic cancer research project, which received initial funding from dollars raised during VeloSano 2 in 2015, has been awarded a $4.7 million grant from the National Heart, Lung and Blood Institute (NHLBI), part of the National Institutes of Health.

The new funding will support a Cleveland Clinic-led research consortium, which will focus on developing strategies to prevent cancer-associated thrombosis (blood clot formation), a potential side effect of cancer treatment.

In 2016, Keith McCrae, MD, Director of Hematology at the Taussig Cancer Institute, and Alok Khorana, MD, Director of the Gastrointestinal Malignancies program at the Taussig Cancer Institute, received a VeloSano Impact Award for $150,000 per year over three years, initiated through Cleveland Clinic’s Center of Excellence in Cancer Thrombosis Research. The seed funding allowed the research to advance and become eligible for federal funding.

Dale Shepard, MD, PhD, Director, Taussig Cancer Institute Phase I and Sarcoma Programs, and Co-Medical Director of VeloSano, is pleased about the grant from NHLBI. “Both Dr. McCrae and Dr. Khorana, who holds the Sondra and Stephen Hardis Chair in Oncology Research, have been working on cancer thrombosis for a long time,” he says.

Federal funding for medical research continues to be extremely competitive, and Dr. Shepard says that philanthropic support of the initial stages of research is crucial to securing additional support. “NIH funding is now often directed toward teams rather than individual labs. VeloSano is helping to fund Cleveland Clinic’s Centers of Excellence to support our investigators as they develop more comprehensive research programs to work together instead of in silos.”

Dr. Shepard believes that more external funding from projects supported by VeloSano will occur as more of the initial research is completed. “The roughly $12.4 million of external funding received so far is primarily from the first two years of support from VeloSano,” he says. “Many of the projects from subsequent years have not yet been completed or those results are in the process of being used to write grant proposals.”

Dr. Shepard cautions that it takes more than a great idea to get funding for cancer research. “It takes preliminary research to show that the investigators can do the work, that the work is feasible and that there is a good chance for success,” he says. “This is one of the most important ways VeloSano can help push forward the next steps toward better cancer therapies and perhaps a cure: Funding great ideas by our Cleveland Clinic researchers and allowing them the resources to potentially move those ideas closer to reality.”

Your support of VeloSano, where 100% supports lifesaving cancer research at Cleveland Clinic, is helping to make advancements like this possible. Make a gift today.

Where Science and Art Shine

Where Science and Art Shine

At Cleveland Clinic, art and medicine converge. Throughout its facilities, contemporary artworks are on display, hundreds of free musical performances take place each year, and patients benefit from art and music therapy, helping them cope with illness.

All of this is accomplished under the auspices of the Arts & Medicine Institute, which Tom Mihaljevic, MD, CEO, President and Morton L. Mandel CEO Chair of Cleveland Clinic, has described as “an absolutely wonderful idea carried into reality by a group of people who supported bringing the arts into the healing environment.”

The institute is celebrating its 10th anniversary this year. In surveys and casual conversation, patients, visitors and caregivers note that the art at Cleveland Clinic is comforting and mood-enhancing; that it lowers stress and improves health outcomes.

“Hardly a week goes by without patients saying how meaningful and healing the art has been,” says Joanne Cohen, Executive Director and Curator of the art program, which includes Cleveland Clinic’s collection of more than 6,500 works by local, national and international artists.

A Long Association with the Arts

Even before the institute was established under Toby Cosgrove, MD, Executive Advisor and former CEO and President of Cleveland Clinic, the arts had a place at Cleveland Clinic. In the 1920s, a portrait of automobile pioneer and patient James Ward Packard was one of the first pieces given to the hospital. Since then, benefactors have provided many works of art, as well as made monetary commitments so that new pieces could be acquired.

Mr. Solomon and Mr. Post were excited to meet the artist at an event in May celebrating the institute’s anniversary. Appropriately, the event took place at the Taussig Cancer Center, where Mr. Finch’s unconventional landscapes glow on all seven floors of the building.

Convergence of Art and Science

One of the newest outpatient buildings on main campus, the Taussig Cancer Center was designed with art in mind, and its light- and art-filled spaces are uplifting. “You could drop it into the heart of Paris, London or Hong Kong, and it would be a sensation,” Dr. Mihaljevic said.

“The profile of the mountain changes as you move around it,” Mr. Finch explained at the anniversary event. “In Taussig, the works exist as a way-finding tool in some ways. The colors and profiles are a bit different.”

Francois Bethoux, MD, Medical Director of the Arts & Medicine Institute, noted that Mr. Finch, whose high-profile projects include a major piece for the National September 11 Memorial & Museum in lower Manhattan, has been described as a “visual poet with scientific sensibility.”

The description is apt. “I use scientific instruments in my work,” Mr. Finch said in his remarks. “I’m really interested in understanding the world through experimentation [and] understanding the truth of something by having repeated experiences of it. Really, for me, it’s the beauty of the scientific method.”

“Mr. Finch’s works are examples of the convergence of art and science, which is our focus in the Arts & Medicine Institute,” says Maria Jukic, Executive Director. “Integrating the arts – music, art and music therapy, live performances – helps to create healing experiences for patients, visitors and employees. They truly enhance the healthcare environment.”

To learn more about the healing power of art, please download our digital book, Power of Art.

You can help support the Arts & Medicine Institute by making a gift here. For more information, contact Karen Wyman at wymank@ccf.org.