How is NfL measured?

NfL can be measures from essentially any body fluid and is typically measured from the CSF, serum, or plasma. Early NfL assays utilized either enzyme-linked immunosorbent assay (ELISA) or electrochemiluninescence (ECL) technology. These technologies were unable to measure the low levels of NfL present in the blood of many individuals (called a “floor” effect) and thus had limited utility in assessing NfL outside of CSF. Single molecule array (SIMOA) technology is a digital methodology that provides very high assay sensitivity and thus essentially can measure almost any level of NfL found in plasma and serum. Several companies provide sensitive assays for NfL, including Quanterix, Siemens, and Roche Diagnostics/Labcorp. Each use a somewhat different approach and thus yields somewhat different values, making direct comparisons across assays difficult. Other assays are in development, too.

How is NfL related to MS?

In MS, focal inflammation causes CNS injury and subsequent release of NfL. Thus, elevated levels of NfL are seen in the serum of patients who have gadolinium-enhancing lesions on MRI and clinical relapses. In a longitudinal study of monthly MRI and blood draws after stopping an MS therapy (natalizumab), increases in serum NfL levels were observed one month or more after development of enhancing lesions [3]. Additionally, not all patients with enhancing lesions in that study demonstrated elevations in NfL. An increase in NfL was not seen in patients without gadolinium-enhancing lesions, although would be expected in other conditions that injure CNS tissue such as stroke and trauma. Thus, NfL is a relatively specific indicator of active, focal inflammation in MS patients, but is not a very sensitive measure of that inflammation. 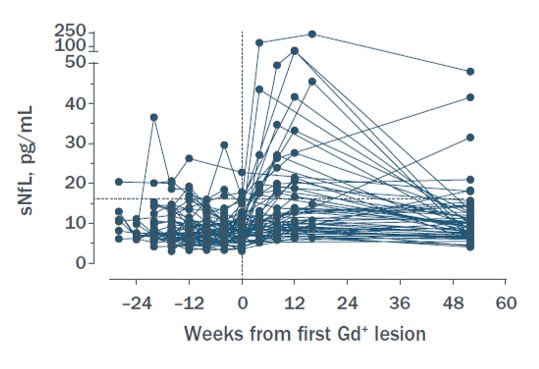 What level of NfL is considered abnormal?

Levels of NfL in otherwise healthy adults increases with age, renal insufficiency, and medical conditions such as diabetes. [4] Furthermore, different NfL assays have defined abnormal cut-offs quite differently. Not surprisingly, the expected value of NfL in MS patients without active inflammation is not well defined. Thus, identifying a specific abnormal cut-off in MS patients is challenging and current a topic of research. Online nomograms to define normal cut-offs have been proposed, but are not yet in routine use as this field is evolving.[4]

Many studies have reported an association between elevated serum NfL and subsequent disability progression, conversion to secondary progressive MS, progressive brain atrophy, and worsening of cognitive performance.[[5] [7]; [8]; [9]] These studies provided encouragement that NfL may reflect the insidious neuroaxonal loss that is the presumptive underpinning of progressive MS. However, subsequent studies found that when focal inflammation is removed from the picture by studying patients receiving a highly-effective anti-inflammatory therapy such as natalizumab, serum NfL levels no longer correlate or predict subsequent disability progression.[[10]; [11]] Thus, the association reported in previous studies appear likely to have been driven by the focal inflammation represented by new MRI lesions and clinical relapses. Accordingly, NfL appears to reflect the focal inflammation (e.g. clinical relapses and new/active MRI lesions) sometimes seen in progression MS and does not appear to reflect the ongoing pathology of progressive MS. 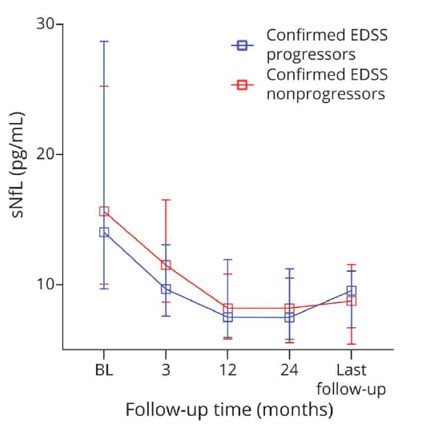 Figure 3: Longitudinal dynamics of NfL in those with disability progression (as measured by Expanded Disability Status Score, blue) and nonprogressors (red), all while under treatment with natalizumab and having no clinical relapses or MRI activity.[10]

Given the effect of MS disease modifying therapies on focal inflammation, it may not be surprising that therapies effective in reducing clinical relapses and new lesions in RRMS also reduce serum NfL levels.[[12], [13]] Currently, NfL is being explored as an outcome in proof-of-concept phase 2 trials of anti-inflammatory therapies in RRMS.

Clinical trials of ocrelizumab in PPMS and siponimod in SPMS found robust and sustained reduction of serum NfL in association with treatment. These studies provided encouragement that NfL may be a useful outcome metrics for progressive MS trials. However, enthusiasm was reduced by the INFORMS trial of fingolimod in PPMS and ASCEND trial of natalizumab in SPMS. In both trials, the overall clinical outcome was negative but active treatment was associated with a robust reduction in NfL. Thus, NfL gave a “false-positive” result in those trials. Two other phase 2 trials in progressive MS found benefit on their primary MRI outcome, progression of brain atrophy, yet failed to show benefit on serum levels of NfL. [[2] [14]]. Thus, NfL gave a “false-negative” result in these two progressive MS trials: the trials met their primary and several secondary imaging outcomes, yet did not show a benefit on serum NfL levels. Accordingly, at this time, NfL does not appear to be a useful marker in progressive MS trials besides reflecting levels of focal inflammation (e.g. clinical relapses and new/active MRI lesions).

How can NfL be used in the routine monitoring of MS patients?

As described above, NfL can reflect the impact of focal inflammatory disease activity in MS and, thus, is an attractive blood biomarker for use in individual MS patient management. The exact role of serum NfL in the monitoring and management of MS patients is still being defined, but several important aspects of serum NfL need to be recognized when translating published group-based research findings into everyday individual-patient clinical practice: 1) the expected normal range of serum NfL is not well-defined and will depend upon the measurement assay and patient characteristics such as age, kidney function, and other medical conditions such as diabetes; 2) the kinetics of NfL need to be considered, including its increase 1 month or more after the onset of focal inflammation and its unknown clearance rate from the blood; 3) elevations in NfL are seen in some patients with new/active lesions but not all, making NfL an incomplete measure of the focal inflammation characterized by MRI; 4) aside from reflecting ongoing focal inflammation, NfL levels in progressive MS are not related to progression.

Nonetheless, MS providers are exploring how serum NfL might be utilized in routine patient management. It may be helpful to monitor as an overall trend of MS tissue injury. It may fill a monitoring role between MRIs, supplementing patient report and clinical exams. It is considerably less expensive than a brain MRI, so may be a useful supplement between routine MRIs, although its insensitivity relative to MRI needs to be recognized. At this time, serum NfL is not the sole basis of changes in long-term treatment regimens and does not replace MRI when evaluating whether new symptoms may represent active foal MS inflammation. Indeed, its delayed rise one month of more after the development of new focal lesions on MRI needs to be kept in mind.

Are there specific situations where serum NfL may be particularly useful?

There are specific situations where serum NfL may be particularly helpful in MS patient management.