Hypertrophic Cardiomyopathy (HCM) is a disease that affects the heart muscle, causing the muscle to enlarge, or "hypertrophy."

At Cleveland Clinic's Miller Family Heart, Vascular & Thoracic Institute, we have a special interest in treating Hypertrophic Cardiomyopathy (HCM). Since 1978, we have treated hundreds of patients and the numbers are increasing each year.

What is hypertrophic cardiomyopathy (HCM)?

Thickening of the heart muscle (myocardium) occurs most commonly at the septum. The septum is the muscular wall that separates the left and right side of the heart. Problems occur when the septum between the heart’s lower chambers, or ventricles, is thickened. The thickened septum may cause a narrowing that can block or reduce the blood flow from the left ventricle to the aorta - a condition called “outflow tract obstruction.” The ventricles must pump harder to overcome the narrowing or blockage. This type of hypertrophic cardiomyopathy may be called hypertrophic obstructive cardiomyopathy (HOCM).

HCM also may cause thickening in other parts of the heart muscle, such as the bottom of the heart called the apex, right ventricle, or throughout the entire left ventricle. 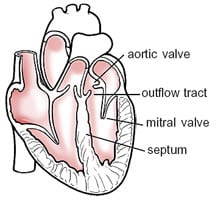 Cellular changes, or changes in the cells of the heart muscle, occur with HCM. Through a microscope, the cells appear disorganized and irregular (called “disarray”) instead of being organized and parallel. This disarray may cause changes in the electrical signals traveling through the lower chambers of the heart and lead to ventricular arrhythmia (a type of abnormal heart rhythm). 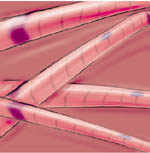 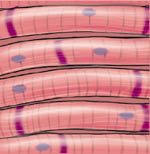 Who is affected by hypertrophic cardiomyopathy (HCM)?

Hypertrophic cardiomyopathy affects an estimated 600,000 to 1.5 million Americans, or one in 500 people. It is more prevalent than multiple sclerosis, which affects one in 700 people.

Because the cause of HCM varies, it is frequently difficult to identify a high-risk population.

What are the conditions associated with hypertrophic cardiomyopathy (HCM)?

Many people with HCM live a normal life and do not experience health-related problems.

Other people with HCM may develop heart conditions that shorten life or decrease the person’s quality of life, including:

Symptoms associated with the presence of ventricular tachycardia or heart failure include: