Marfan Syndrome is a condition that affects the connective tissue of the body and causes damage to the heart, aorta, and other parts of the body. This complex condition requires a specialized and experienced approach to care.

Changes to the heart and blood vessels with Marfan syndrome

About 90% of people with Marfan syndrome develop changes in their heart and blood vessels:

The walls of the blood vessels, especially the aorta, the major artery that carries blood from the heart to the rest of the body, becomes weak as a result of Marfan syndrome and dilates (stretches).

This increases the risk of the following:

The heart's valves, especially the mitral valve, can be affected by Marfan syndrome. The valve leaflets become floppy due to Marfan syndrome and do not close tightly, allowing blood to leak backwards across the valve (mitral valve prolapse, also called MVP).

Mitral valve prolapse increases the workload on the heart and may cause shortness of breath, feeling overly tired, or palpitations (fluttering in the chest). The abnormal flow may cause a heart murmur, which can be heard with a stethoscope. Over time, the heart may enlarge and heart failure may occur.

Arrhythmia (abnormal heart rhythm) may occur in some Marfan syndrome patients. This is often related to MVP.

Surgery for Marfan syndrome is aimed at preventing dissection or rupture and treating valve problems.

The normal aorta measures about 1 inch (2.54 centimeters). When the aorta diameter is more than 4.7 centimeters, or if the aorta is enlarging at a rapid pace, surgery is recommended.

Compare the aortic aneurysm to the left with the normal heart to the right. 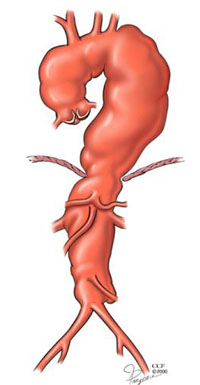 All portions of the aorta can dilate or dissect

The decision to have surgery is based on the following:

During non-emergency aorta surgery, the survival rate is greater than 98 percent.

Surgery involves a replacement of the dilated portion of the aorta with a graft. This can involve two techniques:

The coronary arteries are reattached to the aortic graft through small buttonholes cut into the graft. Then, the other end of the dacron graft is sewn to the tissue of the aorta.

Both are used for young people whose aortas are not too enlarged and the aortic valve has not been damaged.

The valve sparing re-implantation method is preferred for those with Marfan Syndrome.

After aortic graft surgery, patients usually remain in the hospital 5 to 10 days. After a recovery period of six to eight weeks, return to activities is expected. 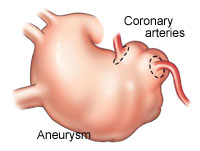 1. The coronary arteries branch off the aorta. The aorta is opened and the area of dissection is removed

2. The coronary arteries are separated from the diseased aorta. You can see the patient's native aortic valve.

3. The dacron graft is sewn to the annulus of the native valve. 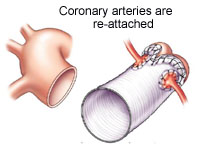 4. The coronary arteries are re-attached to the graft. The other end of the graft is sewn to the aorta. 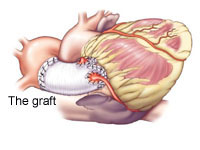 5. The surgery is completed.

A leaky aortic or mitral valve (regurgitation) resulting in changes in the left ventricle (left lower chamber of the heart, heart's major pumping chamber) or heart failure, require surgery to repair or replace the valve.

This can be done with traditional or minimally invasive techniques.

It is recommended that people with Marfan syndrome undergo surgery by heart surgeons who are experienced in this type of surgery. Those that undergo surgery, still require lifelong follow-up and preventive measures to prevent future progression of the disease. The majority of patients who have surgery prior to dissection do not need future surgeries. However, those that are operated on after dissection are at greater risk for future surgeries to repair other sections of the aorta.

A better understanding of Marfan syndrome combined with earlier detection, careful follow-up and safer surgical techniques have resulted in better outcomes for patients.