Erectile dysfunction, commonly referred to as ED, is the inability to achieve and sustain an erection suitable for sexual intercourse. It is estimated that about 1 in 10 adult males suffer from ED on a long-term basis.
Erectile Dysfunction

What is erectile dysfunction (ED)?

Erectile dysfunction (ED) is the inability to get and keep an erection firm enough for sexual intercourse. Estimates suggest that one of every 10 men will suffer from ED at some point during his lifetime. It is important to understand that in most cases, ED is a symptom of another, underlying problem. ED is not considered normal at any age, and may be associated with other problems that interfere with sexual intercourse, such as lack of desire and problems with orgasm and ejaculation.

How common is erectile dysfunction?

Approximately one in 10 adult males will suffer from ED on a long-term basis.

Many men do experience occasional failure to achieve erection, which can occur for a variety of reasons, such as drinking too much alcohol, stress, relationship problems, or from being extremely tired.

ED does not have to be a part of getting older. While it is true that some older men may need more stimulation, they should still be able to achieve an erection and enjoy intercourse.

ED can be caused by a number of factors, including:

Chronic illness, certain medications, and a condition called Peyronie's disease can also cause ED. Operations for the prostate, bladder, and colon cancer may also be contributing factors.

What medications could cause erectile dysfunction (ED)?

Erectile dysfunction (ED) is a common side effect of a number of prescription drugs. While these medications may treat a disease or condition, in doing so they can affect a man's hormones, nerves or blood circulation, resulting in ED or increasing the risk of ED.

If you experience ED and think that it may be a result of the medication you are using, do not stop taking the medication. If the problem persists, contact your doctor and he or she may be able to prescribe a different medication. Common medications that may list ED as a potential side effect include:

These drugs not only affect and often suppress the central nervous system, but can also cause serious damage to the blood vessels, leading to permanent ED.

What prescription drugs may cause erectile dysfunction?

Erectile dysfunction (ED) is a common side effect of a number of prescription drugs. While these medications may treat a disease or condition, in doing so they can affect a man's hormones, nerves or blood circulation. The result may be ED or an increase in the risk of ED.

If you have ED and think that it may be a result of the medication you are using, do not stop taking the medication. If the problem persists, contact your doctor and he or she may be able to prescribe a different medication. Common medications that may list ED as a potential side effect include:

What other substances or drugs may cause erectile dysfunction?

Aside from the well-known complications that the use and abuse of these drugs can cause, ED is not often mentioned. However, use of these drugs is a risk factor for ED. These drugs not only affect and often times slow down the central nervous system, but can also cause serious damage to the blood vessels, leading to permanent ED.

How are depression and erectile dysfunction related?

For some men, depression can accompany the condition of erectile dysfunction (ED). It is common for men with ED to feel angry, frustrated, sad, unsure of themselves, or even less “manly.” Such feelings may lead to a lack of self-esteem and, in severe cases, to depression.

Depression that accompanies ED is treatable. The first step in addressing your concerns about ED-related depression is to be honest with yourself, your partner, and your doctor. After depression has been brought out into the open, coping with it will be easier and less stressful.

How is erectile dysfunction (ED) diagnosed?

Because there are a variety of causes for ED, there are several different tests your doctor may use to diagnose the condition and determine its cause. Only after the cause of ED is determined can it be effectively treated.

The doctor may also wish to interview your sexual partner since your partner may be able to offer in sight about the underlying causes.

After your physical examination and discussion, your doctor may then order any one of the following tests to further diagnose your condition:

Before you are given any of these tests, your doctor will explain what is involved. If you have any questions, do not hesitate to ask your doctor.

The type of medical specialist who treats ED will depend on the cause of the problem. Based on your family's medical history, as well as your own medical history and current health, your doctor may treat you with oral medications (Viagra®, Levitra®, Cialis®).

If these options fail, you may be referred to a urologist who can assist with other non-surgical options such as vacuum device or injections or surgical treatment options. If needed, your doctor may also refer you to a psychologist specializing in sexual dysfunction.

How is erectile dysfunction treated?

ED can be treated in many ways, including:

Each type has its own pros and cons. Discuss your options with your doctor to determine the best treatment for you.

The first step to treating ED is to find the underlying cause. Then the appropriate treatment can begin. There are a number of non-surgical and surgical options that can help a man regain normal sexual function.

What non-surgical treatments are there for erectile dysfunction (ED)?

Education about sex, sexual behaviors, and sexual responses may help a man overcome his anxieties about sexual dysfunction.

Talking honestly with your partner about your needs and concerns may also help to overcome many barriers to a healthy sex life.

Medications such as sildenafil (Viagra®), vardenafil (Levitra®), or tadalafil (Cialis®) may help improve sexual function in men by increasing blood flow to the penis. Men who are on medicines that contain nitrates such as nitroglycerine should not take oral ED medications. The combination of nitrates and these specific medications can cause low blood pressure (hypotension).

The most common side effects of these medications are indigestion, nasal congestion, flushing, headaches and a temporary visual disturbance. 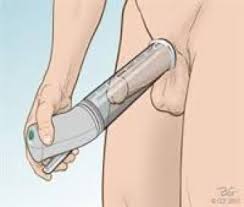 Aids such as vacuum devices and penile constriction rings serve as erectile aids for some men.

A vacuum constriction device (above) is a cylinder that is placed over the penis. The air is pumped out of the cylinder, which draws blood into the penis and causes an erection. The erection is maintained by slipping a band off of the base of the cylinder and onto the base of the penis. The band can stay in place for up to 30 minutes. The vacuum device can be safely used to treat most causes of erectile failure. Lack of spontaneity, discomfort, and cumbersomeness of the device seem to be the biggest concerns of patients.

Men are taught how to inject medications directly into the erection chambers of the penis to create an erection. Injection therapy is effective in treating a wide variety of erection issues caused by blood vessel, nerve and psychological conditions.

Using a tiny needle and syringe, the man injects a small amount of medicine into the side of his penis. The medicine relaxes the blood vessels, allowing blood to flow into the penis. This treatment has been widely used and accepted since the early 1980s. The three most common medicines are prostaglandin E1 (alprostadil), papaverine (Papacon®), and phentolamine (Regitine®).

The most common side effects are pain and penile scarring (fibrosis). In extremely rare cases, patients with cerebral and vascular disease or severe cardiovascular diseases might not be able to tolerate the dizziness and high blood pressure occasionally caused by injection therapy.

A painful erection that lasts longer than two to three hours is called priapism and may occur with injection therapy. This can be lessened with proper dosing and by following the treatment guidelines.

Psychological causes may contribute to erectile failure even when there is a clear organic cause.

Therapy with a trained counselor can help a person address feelings of anxiety, fear or guilt that may have an impact on sexual dysfunction.

Sex therapy can be beneficial to most men when counseling is provided by a skilled sex therapist. Sex therapy also helps a man's partner accept and cope with the problems.

A patient whose ED has a clear psychological cause should receive sex therapy counseling before any invasive treatments are pursued.

Low hormone levels may play a role in ED. Hormone replacement in the form of topical gels, creams, patches, injections and pellets are only used after physician evaluation.

What are surgical treatment options for erectile dysfunction (ED)?

Inflatable penile prostheses are implanted during outpatient surgery. Once they are part of a man's body, they enable him to have an erection whenever he desires. The use of a prosthesis preserves penile sensation, orgasm and ejaculation for most men.

The most commonly used penile implant consists of a pair of inflatable cylinders that are surgically implanted in the erection chambers of the penis. The cylinders are connected through tubing to a reservoir of fluid under the lower abdominal muscles, and to a pump inside the scrotal sac.

To inflate the penile prosthesis, the man compresses the pump a number of times to transfer fluid from the reservoir to the cylinders. This causes the penis to become erect. When inflated, the prosthesis makes the penis stiff and thick, which is very similar to a natural erection.

A penile prosthesis does not change the sensation on the skin of the penis or a man's ability to achieve orgasm or ejaculate. Pressing on a deflation valve attached to the pump returns the fluid to the reservoir, which returns the penis to a flaccid state.

The surgical procedure is performed through one or two small incisions that are generally well hidden. Other people will be unable to tell that a man has an inflatable penile prosthesis. Complications following surgery are not common, but primarily include infection and mechanical device failure.

Approximately 95% of penile implant surgeries are successful in producing erections that enable men to have sexual intercourse. Moreover, patient satisfaction questionnaires show that up to 90% of men who have undergone penile implants say they would choose the surgery again, and overall satisfaction ratings are higher than those reported by men using oral medication or penile injection therapy.

Can erectile dysfunction (ED) be prevented?

For people who are at risk of developing ED due to personal behavior, steps may be taken to try to prevent its occurrence. However, other causes may not be preventable.

A number of studies now suggest a link between ED and obesity, high cholesterol, hypertension, diabetes and heart disease.

The following recommendations may help prevent ED or improve the problem if it is already present:

What should I do if I am having problems achieving/keeping an erection?

If you suspect you have erectile dysfunction, please see your primary care physician or a urologist. He or she can perform tests to find out what is causing your problem and refer you to a specialist if needed. Once the cause is identified, there are several treatment options to choose from.