“Half the Man I Used to Be” Thanks to Lifestyle Medicine 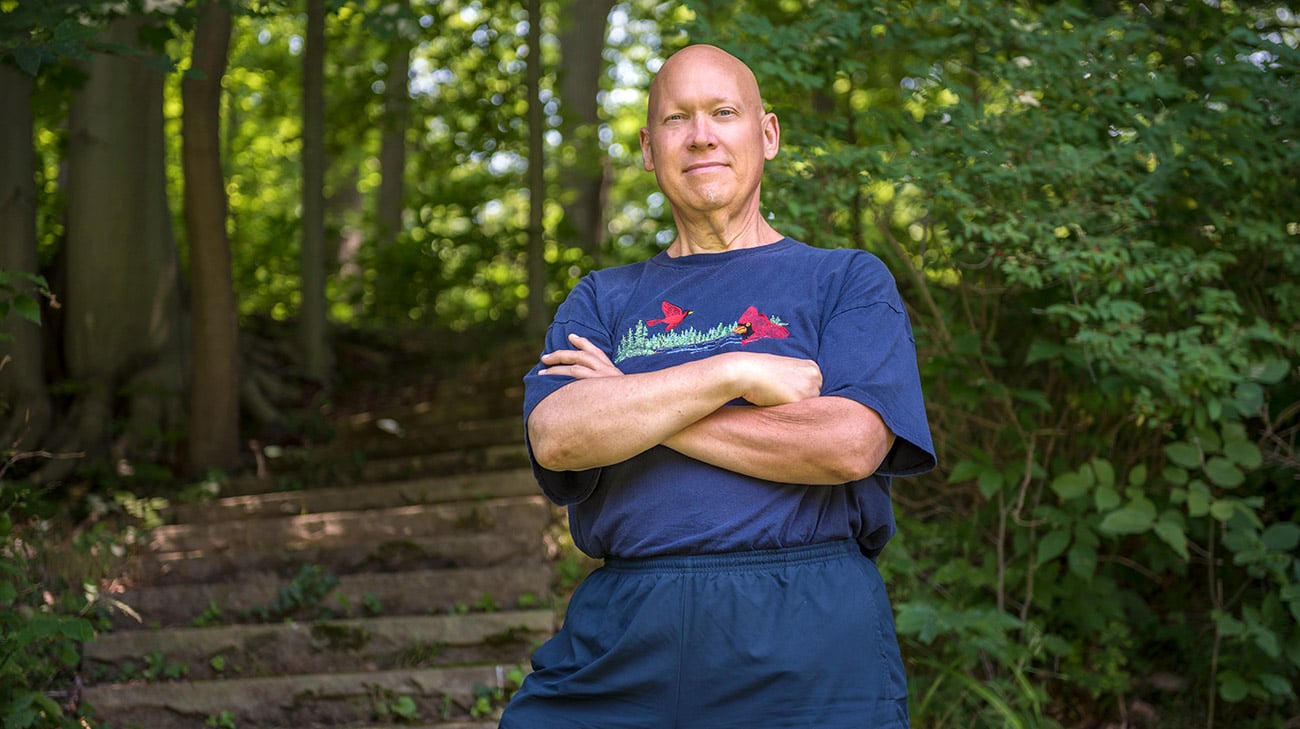 One warm June morning, Michael Harmon felt the sun beaming on his face and a slight breeze brushing his shoulders. He was taking the first of his four walks that day, and thinking about how life was a gift.

That’s not how he’d felt two years earlier. At 447 pounds, he spent much of his time at home in the dark. He would stay up most nights binge eating.

A patient in Cleveland Clinic’s Bariatric & Metabolic Institute, Michael had been scheduled for gastric bypass in 2016. But two weeks before surgery, he had a change of heart.

“I thought I should try to make changes for myself before resorting to surgery,” he says. “I decided to try substitution. It made sense to me that foods like spinach, carrots and broccoli were more nutritious and less harmful than other foods I was eating. So, I started bingeing on those. I didn’t change my food addiction, just the food.”

It was a step in the right direction. The second step was walking.

At first, venturing down the driveway to the mailbox seemed like a marathon. But eventually Michael built up enough stamina to walk in the park. And then to walk several times a day.

If anything, the retired financial services executive had drive. He had built two lucrative businesses and been inspired by historic self-help author Napoleon Hill, who believed a “burning desire” was the key to success.

One year later, Michael had lost more than 100 pounds.

Still, his relationship with food wasn’t healthy. Michael was still morbidly obese and living with diabetes, high blood pressure and other medical conditions. While he was eating healthier foods, he was still binge eating.

One of his doctors told him about Cleveland Clinic’s Center for Integrative & Lifestyle Medicine. Experts there help patients with chronic conditions get control of their health through evidence-based nutrition and lifestyle medicine, as well as alternative treatments like yoga, hypnotherapy and interactive guided imagery.

In November 2017, Michael went to the center’s Lyndhurst campus for a presentation by Jane Ehrman, MEd, CHES, CHT, a stress management therapist who specializes in mind/body techniques. Soon he began private sessions with her.

“Jane got my attention,” says Michael. “She taught me the importance of following my circadian rhythm and my body’s need to ‘rest and digest.’ That meant going to bed earlier, sleeping when it was dark, and not staying up until the early morning.”

In early 2018, Michael began attending the center’s Shared Medical Appointment (SMA) programs. First he attended TRIM-LIFE, a six-week weight management SMA, led by Jane and other medical providers. Each week, Michael and a small group of other patients met to learn about food options and age-appropriate movement. They also learned how to use mindfulness techniques to help reduce stress eating and overcome food addiction.

“TRIM-LIFE helped reveal my emotional ties to food,” says Michael. “Eating triggered serotonin and dopamine in my brain, neurotransmitters that helped me feel happy. I didn’t have just a weight issue, I had an emotional issue.”

Michael credits yoga instructor Judi Bar, E-RYT 500, C-IAYT, for helping him develop an attitude of gratitude instead of relying only on food for pleasure.

“During TRIM-LIFE, Judi taught us to focus on life’s simple pleasures, like the feel of water during a shower or the comfort of sheets on the bed,” he says. “She put all of us in touch with our inner child to regain that youthful joy.”

“We have some of the world’s best healthcare and greatest clinicians right here in Northeast Ohio.”

“In the SMA, we discuss how different types of foods can be equally effective — and often more effective — than medications for preventing heart disease, diabetes, dementia and certain types of cancer,” says Dr. Darling.

The Culinary Medicine SMA reinforced Michael’s plan to avoid processed foods and eat more whole foods, like vegetables. He learned from Chef Perko to “love food that loves you back.”

“Sedentary behaviors have been shown to be harmful to health,” says Dr. Darling. “Sitting most of the day slows metabolism and makes insulin work less efficiently. This can lead to type 2 diabetes and other health problems, including obesity and difficulty losing weight.”

Healthier eating combined with increased physical activity has worked wonders for Michael. Seven months after attending that first presentation at the Center for Integrative & Lifestyle Medicine, he has lost 128 more pounds — and is down to 219 pounds.

“I am literally half the man I used to be!” says Michael, whose weight goal is less than 200 pounds.

Even better, he no longer has diabetes or high blood pressure. And his body mass index is down to 31, no longer morbidly obese.

“I have reversed my medical conditions by making lifestyle more important than the gratification that comes from certain food choices,” he says.

He’s looking forward to continuing his care at the Center for Integrative & Lifestyle Medicine, including attending the Lifestyle Essentials SMA and having lymph drainage massage.

“We have some of the world’s best healthcare and greatest clinicians right here in Northeast Ohio,” says Michael, who lives in Strongsville. “More people should take advantage of that — especially the programs offered at the Wellness Institute on the Lyndhurst campus. It’s unlike any other medical facility.”