One Year After Deep Brain Stimulation for Stroke, Patient’s Life is Transformed

For Thanksgiving 2016, Judy Slater was mostly an observer in the kitchen.

Struggling to recover from an ischemic stroke that severely affected movement on the left side of her body, Judy – now 60, and from Pulaski, Pennsylvania – wasn’t able to do much to help her relatives and friends as they prepared their traditional meal.

“Last year, I couldn’t move my left arm too much,” recalls Judy. “I really couldn’t do much of anything. But this year was different.”

For Thanksgiving 2017, Judy made – and her family members eagerly gobbled up – her signature strawberry pretzel salad and tempting cheesy potatoes. With the use of her hand and arm greatly restored, thanks to a pioneering procedure at Cleveland Clinic, Judy had a very enjoyable holiday.

“I could mix everything together, pick up the bowl of ingredients, and pour it into a pan,” she explains, proudly. “I was so happy that I can do the stuff I love again.”

A year ago, Judy became the first human to undergo deep brain stimulation (DBS) therapy through Cleveland Clinic's Center for Neurological Restoration, in order to enhance motor function that was impaired by a stroke.

As part of a decade-long Cleveland Clinic study led by neurosurgeon Andre Machado, MD, chairman of the Neurological Institute, Judy first underwent surgery to implant tiny electrodes in the section of her brain impacted by her stroke.

After a few weeks of recovery, followed by four months of physical therapy, Judy was at last ready for the treatment to begin. Dr. Machado and his team activated the device, sending electrical pulses into Judy’s cerebellum. Slowly, over a period of a few weeks, the intensity of the signals were increased.

And the results were spectacular, as Judy explains: “I noticed a change almost from the beginning. Now, I can move my arm up and down and out to the side. I can reach behind me and turn my wrist.”

Judy threw the first pitch at a Cleveland Indians game with her granddaughter, Peyton, by her side. (Courtesy: Cleveland Clinic)

Her 6-year-old grandson has noticed, too. Before beginning DBS therapy, Judy couldn’t easily grab and throw a ball, or help play with his toys. Now, she’s a very active participant in his games and activities. “I just feel more normal,” Judy adds.

Twice weekly, Judy journeys to Cleveland for physical therapy, which further enhances the impact of the DBS treatments. Often, she works out with a woman who followed in her footprints as the second stroke patient to undergo DBS therapy. 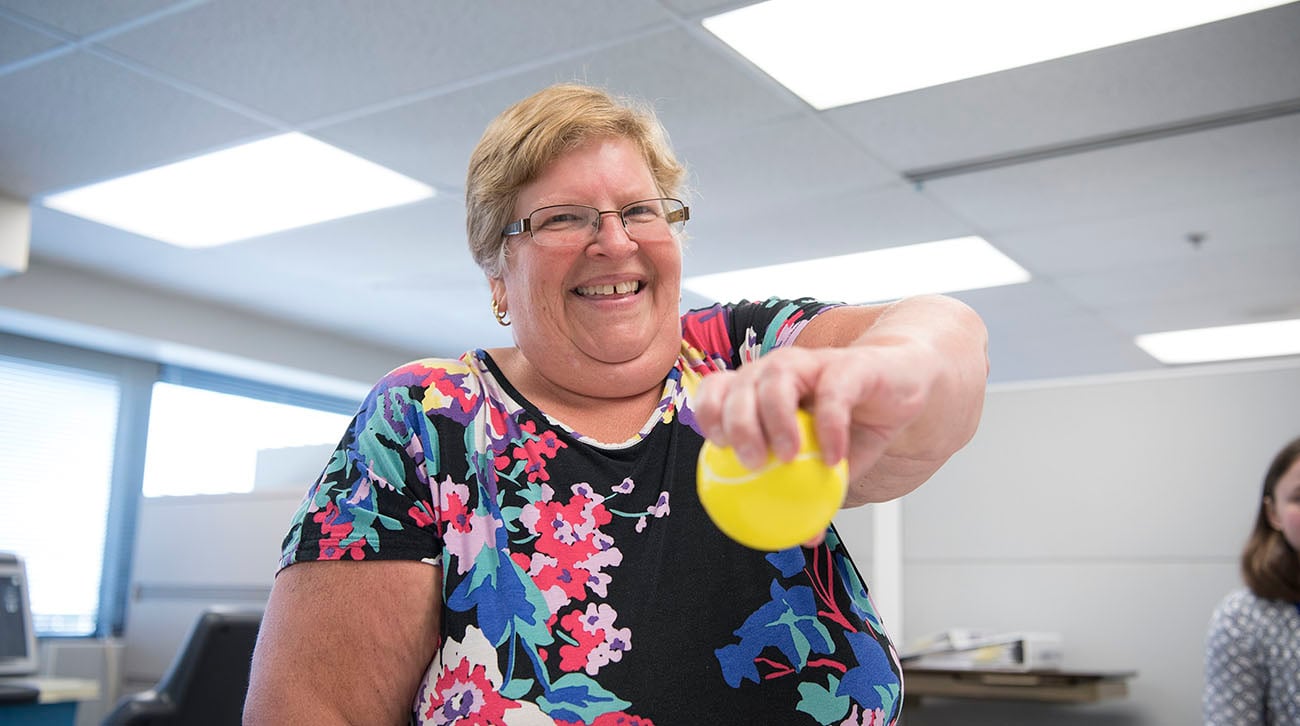 According to Dr. Machado, Judy’s amazing process has prompted him to request a change in the protocol for the clinical study, which originally had Judy scheduled to end treatment after five months in order to fully monitor its effectiveness. Because her progress has yet to plateau, her DBS treatments are continuing for the foreseeable future.

“Many questions remain, but we are encouraged by the positive results so far in our trial with Judy,” he stated. “We look forward to learning much more as this study continues.”