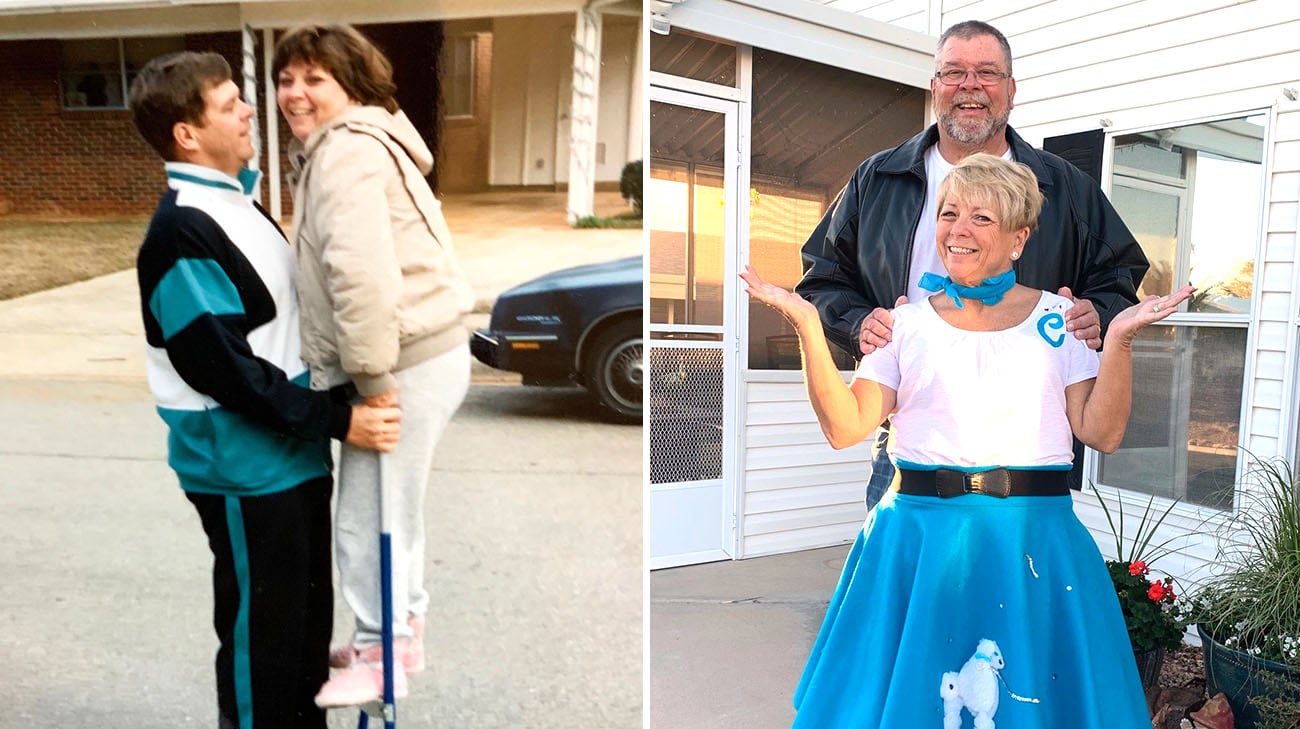 Several years into her journey as the sole caregiver for her husband of 36 years, 68-year-old Coco Hickman thought she had planned for everything.

“You pretty much take over all aspects of life. I pay the bills. I handle our medications. I take care of the doctor’s appointments, all the cooking, the cleaning,” says Coco of her responsibilities while caring for her husband, Bob. Bob has a progressively debilitating disease called Lewy body dementia (LBD).

“I thought I had a plan, but nobody tells you to have a plan for when you’re taken away in an ambulance.”

In February 2022, after months of ignoring signs of fatigue and shortness of breath Coco went into cardiac arrest during a doctor’s appointment for an unrelated issue that, fortuitously, had been delayed a day.

“All of a sudden, I could not breathe. If I hadn’t been at the doctor’s office, I wouldn’t have survived,” says Coco. “God had a plan to have me there at that time.”

The physician immediately administered oxygen, placed Coco into a wheelchair and rushed her across the parking lot from his office to the emergency room of a nearby hospital, not far from her Goldendale, Washington home.

Resuscitated twice in the ensuing minutes, Coco was stabilized and then airlifted by helicopter to a cardiac hospital in Vancouver, Washington. There, she underwent triple-bypass surgery for a condition her doctors diagnosed as broken heart syndrome, which is typically brought on by severe physical or emotional stress. 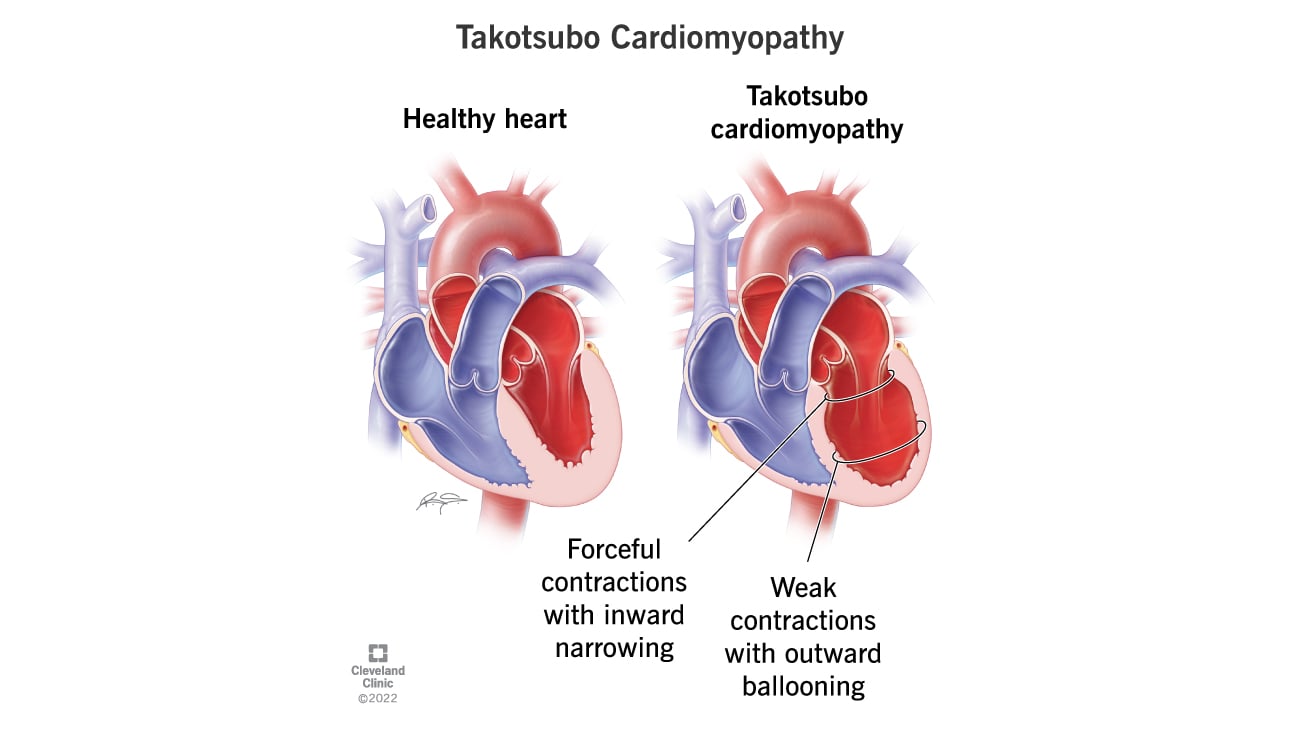 Takotsubo cardiomyopathy or broken heart syndrome is caused by a sudden physical or emotional stress. It causes the lower part of a person's left ventricle to enlarge, creating forceful contractions in other areas of the heart. (Courtesy: Cleveland Clinic)

During her 10-day stay in the hospital, Coco regretted she had neglected her own well-being, to the detriment of both her and Bob. “While the loved one you are caring for is your primary focus, the caregiver’s health is just as important,” she explains. “But it’s just not something I thought about and took the time for. As a result, I almost died and Bob’s world suddenly caved in on him, too.”

Unfortunately, Coco’s story is not uncommon, according to Lucille Carriere, PhD, a clinical psychologist at the Cleveland Clinic Lou Ruvo Center for Brain Health in Las Vegas, Nevada. In her role as the Angie Ruvo Endowed Chair for Caregiving, Dr. Carriere is responsible for clinical programming and research to improve the health and well-being of caregivers like Coco, who care for loved ones with dementia and other brain disorders.

“The unfortunate truth is caregivers take on so much in caring for their loved one and in managing their lives that they often aren’t mindful of their own emotional and physical health needs,” says Dr. Carriere. “They may skip out on preventive healthcare checkups or ignore a health issue. Those issues can then grow into something much larger, as we saw with Coco.” 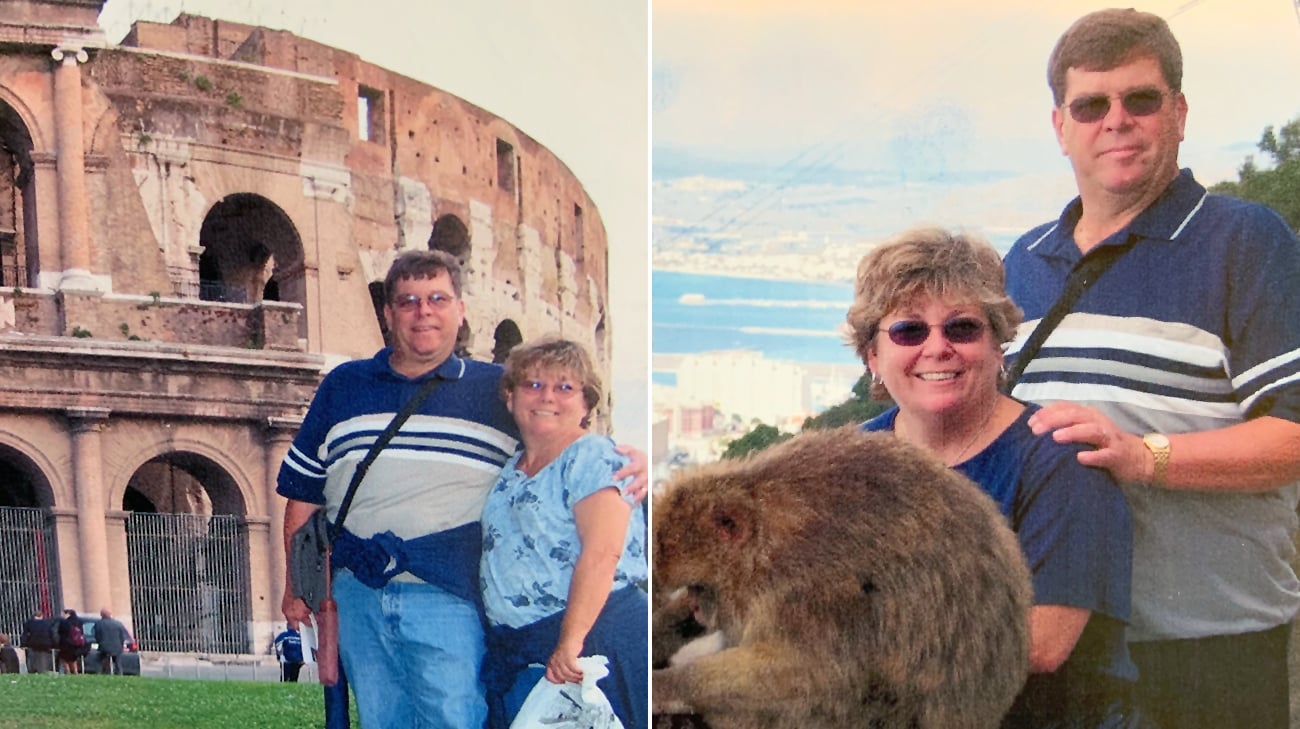 Coco and Bob have been married for 36 years. (Courtesy: Coco Hickman)

Fortunately, the Lou Ruvo Center for Brain Health, where Bob was diagnosed with LBD in 2019 by Dylan Wint, MD, provides extensive support to caregivers, in addition to providing comprehensive diagnosis and ongoing treatment for patients with cognitive disorders. The center provides an array of educational and support programs to caregivers to help them manage stressors and maximize their quality of life during the challenges and opportunities caregiving presents.

Since surviving her own health scare, Coco has taken advantage of several Lou Ruvo Center for Brain Health programs that benefit both her and Bob. Five days each week Bob virtually participates in a music therapy program with fellow patients who have Alzheimer’s disease, dementia and other disorders, under the direction of Becky Wellman, PhD.

“Bob lives for those times and enjoys seeing his friends daily. It’s unbelievable how much good music therapy has done for him,” says Coco. “And when he’s in music therapy, I have an hour to myself, to go into kitchen and make dinner, to go take a shower or do something else. It’s a reprieve.”

Coco has also joined a weekly online support group for dementia caregivers. She says it’s important to talk with others who can relate to what she is going through, although they often spend the time sharing stories about their lives and interests outside of caregiving. 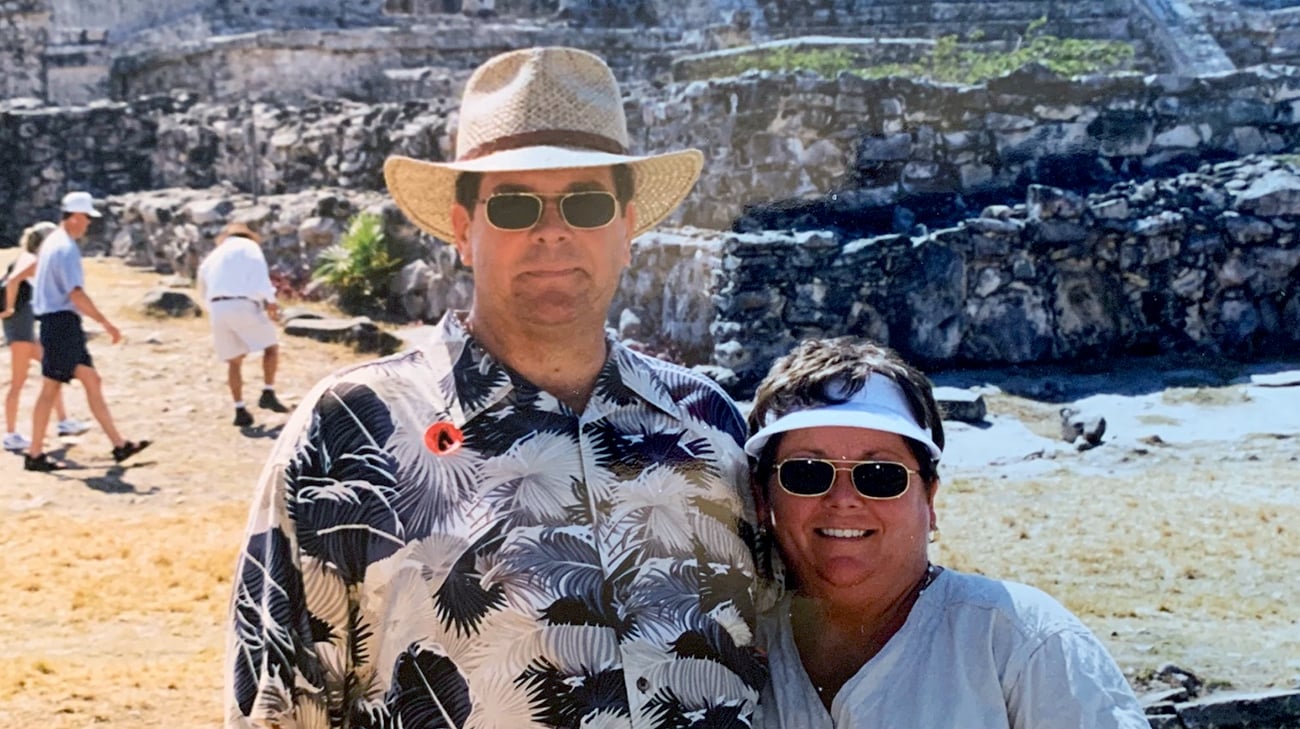 Coco and Bob during their traveling ventures, prior to Bob getting diagnosed with LBD. Coco shares her story as a reminder for caregivers to take care of their health and well-being while caring for a loved one. (Courtesy: Coco Hickman)

“Having people around you that get it, a support team or ‘tribe’ as we call ourselves, is sometimes the only thing that has made my situation manageable,” notes Coco, who often endures LBD symptoms in Bob that can be difficult to handle, such as visual hallucinations, the inability to focus on tasks and sudden bursts of anger.

Dr. Carriere encourages all dementia caregivers to seek out and take advantage of educational and emotional support programs, offered through national dementia organizations or at facilities such as the Lou Ruvo Center. “Patients often live with neurodegenerative diseases for many years. For caregivers, we describe the journey as a marathon,” she notes. “Every person with dementia is unique and so, too, are the needs of the caregiver, especially as the condition progresses. We want to help caregivers recognize personal care needs to support their health and their loved one living with dementia.”

Coco has now built self-care into her daily routine. She’s improved her diet, exercises regularly and works closely with her four children, who each live within a few hours of her home, to ensure she and Bob both have the support they need.

“My advice to caregivers is to remember to look after yourself,” Coco states. “If you don’t, you’re not helping yourself or the loved one you’re caring for.”