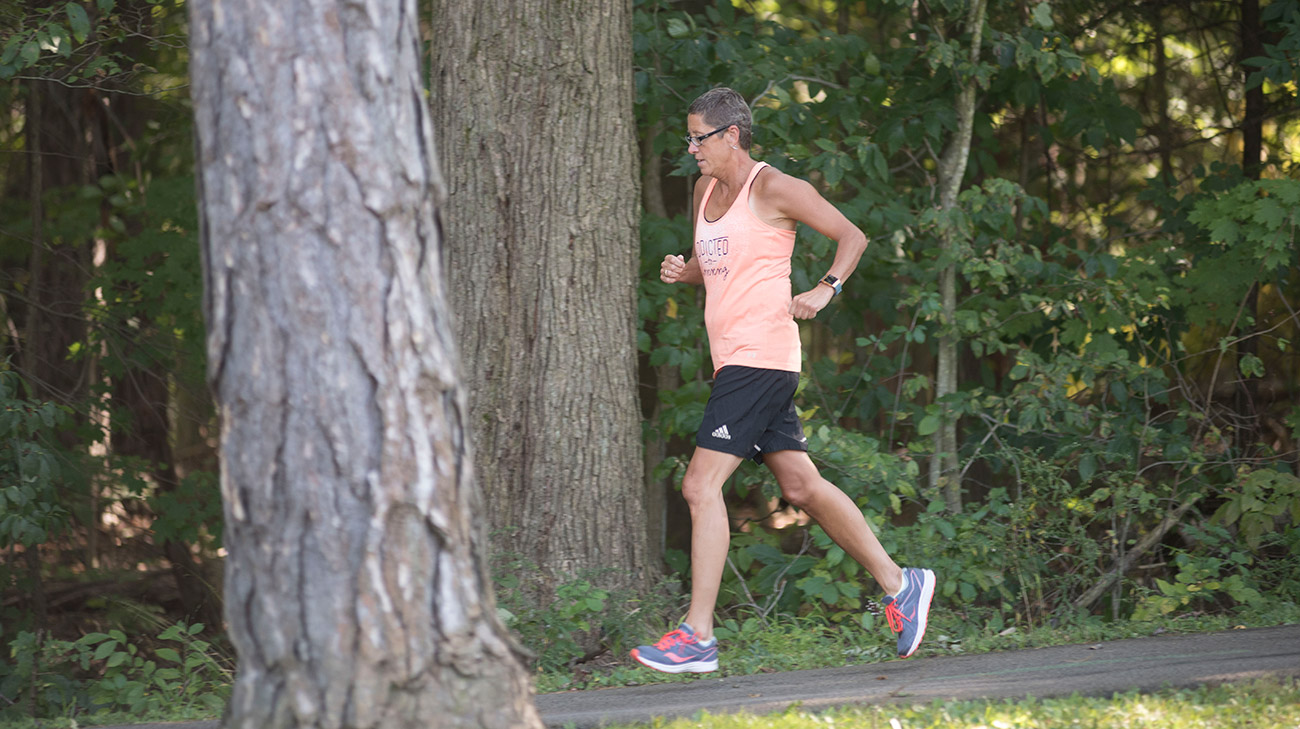 Lifelong runner Joyce Chisar, 55, always dreamed of qualifying for the Boston Marathon. But to make the cut, she must be ranked among the fastest runners in her age group. That's why, in September 2018, the Willowick, Ohio, resident signed up for a marathon in Erie, Pennsylvania.

“I was feeling really good last summer,” she says. “I thought it was the year of Joyce! I'd been training hard at Presque Isle State Park in Erie, and my friends came to watch me run. It's a 13-mile loop. I passed by them a couple of times, but toward the end, a pack of people went through, and I wasn't with them. At mile 20, I had hip pain, I thought because of how I was running on a cambered road. I had to start walking, so couldn't qualify because I couldn't meet my time.”

She took a break for a few weeks. “I started running again in October, but every time, I'd run 100 feet and be out of breath. It felt like I'd eaten an extra-large pizza. I kept running, but I had that overstuffed feeling for a few days.”

Now concerned, she saw a doctor, who ordered a colonoscopy. The day after the procedure, a Friday, she returned to work as an adult parole officer at the Ohio Department of Rehabilitation and Corrections. But by Sunday, she “was almost doubled over in pain” from stomach cramps.

Although she was back at work on Monday, her discomfort finally led her to seek medical help. “They did an ultrasound, and the emergency room doctor discovered a pretty large cyst on my ovary.”

“I am grateful for Cleveland Clinic's amazing care and personal touch — I wasn't just a patient to them. — I’m also thankful for my strong support system of friends, family and coworkers.”

Frightened when she was told it was probably ovarian cancer, Joyce contacted Cleveland Clinic physician Stephanie Ricci, MD, a gynecologic oncologist in Cleveland Clinic's Ob/Gyn & Women's Health Institute. Because the cyst was so large, a total hysterectomy and removal of both ovaries was performed. A biopsy confirmed ovarian cancer. “The good news is that it was caught early, at Stage 1,” Joyce says.

As a precaution, she was started on chemotherapy treatment, and additional radiology studies were performed. These showed a new spot on her lung, which turned out to be lung cancer. However, again, she had some encouraging news: The lung cancer also was early stage, treatable, and unrelated to the ovarian cancer.

“If they hadn't determined that so quickly, it would have changed my whole course of treatment,” she says. “I needed to find a miracle in all of this, and that was my sign.”

Joyce then met with Alejandro Bribriesco, MD, a thoracic surgeon and member of the Department of Thoracic Surgery in Cleveland Clinic's Heart & Vascular Institute, who explained that he would need to remove the lower lobe of her right lung.

As a runner, she was concerned about losing part of her lung, but the fact that she was a well-conditioned athlete also meant she would recover more quickly from surgery, according to Dr. Bribriesco. Also important was her "determined but always upbeat attitude,” he says.

Although it is still unknown why Joyce had two types of cancer, having synchronous cancer is “more common than people think,” Dr. Bribriesco says. Most important for Joyce, he says, is that she was treated at a multidisciplinary medical institution in which a variety of experts regularly come together in groups known as tumor boards to discuss a patient's care. 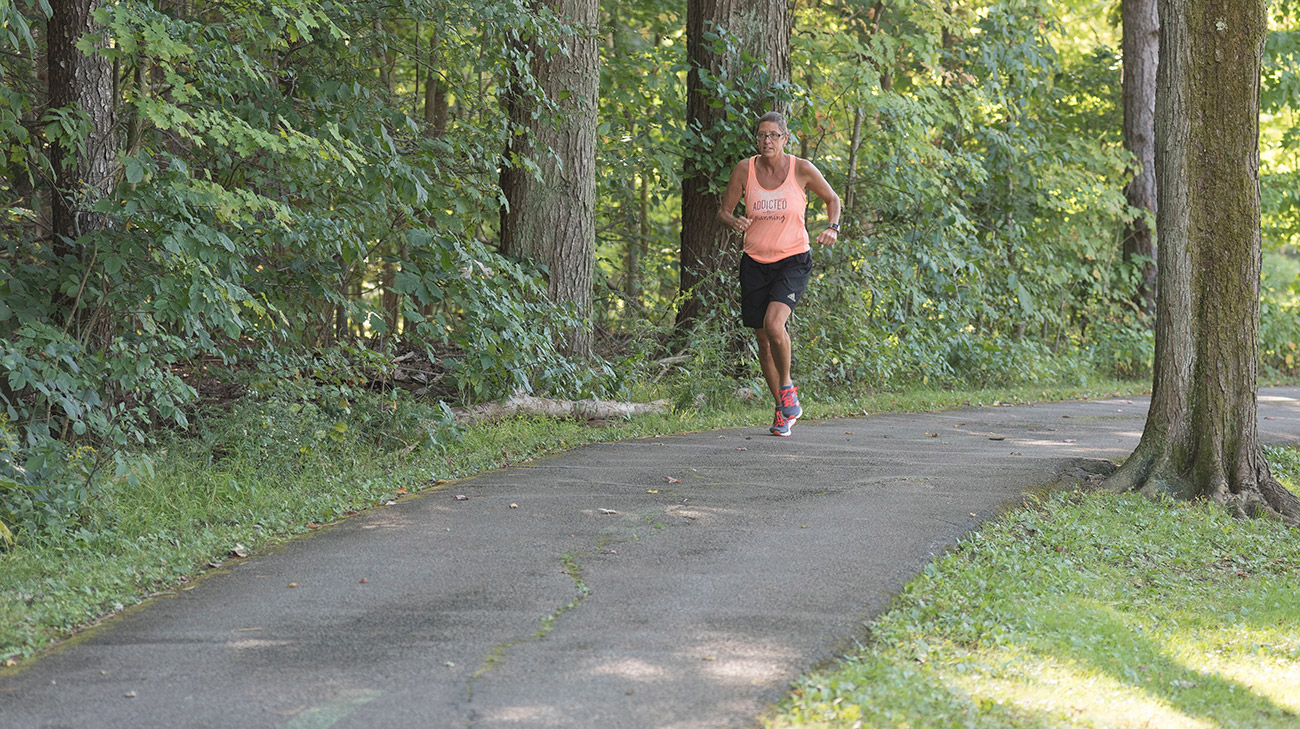 Joyce’s dream of qualifying for the Boston Marathon was put on hold when she was diagnosed with ovarian and lung cancer. Less than a year after a hysterectomy and lung surgery, she’s back to running. (Courtesy: Cleveland Clinic)

“For example, in Joyce's case, a thoracic doctor treating lung cancer and malignancy of the chest meets with a medical oncologist, a radiation oncologist, other surgeons, pulmonologists, and anyone who might treat, diagnose or come in contact with her,” Dr. Bribriesco says. “We are at the table at the same time and can expedite recommendations that can be individualized for a given patient. Rather than having the patient take additional time to physically go to see each doctor, we're all in the same room and can make a plan to treat the cancer as quickly as possible. Cleveland Clinic is able to take care of patients on so many different levels because we have active, dynamic communication.”

Joyce, who had radiation therapy and is still receiving chemotherapy, is doing well since the hysterectomy in November and lung surgery in January. She participated in the Stand Up To Cancer 5K run in August. “The run was awesome. I wanted to run 11-minute miles, but ended up running 10-minute miles. I was super happy and had lots of folks on the course with signs cheering me on. It was an awesome day.”

She also is back at work. “I am grateful for Cleveland Clinic's amazing care and personal touch — I wasn't just a patient to them. — I’m also thankful for my strong support system of friends, family and coworkers.” She says that she has enough get-well cards to wallpaper her home, and she received so many fruit arrangements that the delivery driver, after telling her to “get well soon” the first several times, finally grew weary.

“When I woke up from surgery, I could feel the difference immediately... I’m back to my active life. We went to Africa a couple of months after my mesh removal. And I just walked seven miles this morning.”
Read Story

“The surgery’s not a magic bullet, but it gives you the tool in your toolbox. Once you lose the weight, it’s a much better life.”
Read Story

“My faith, my belief in my doctors and science, encouragement from other women in the group sessions and expert care and support from Dr. Abed and Diana Issacs played a big part in my successful pregnancy.”
Read Story
Facebook Twitter YouTube Instagram LinkedIn Pinterest Snapchat