What is pulmonary vein ablation?

Atrial Fibrillation and The Electrical System of The Heart 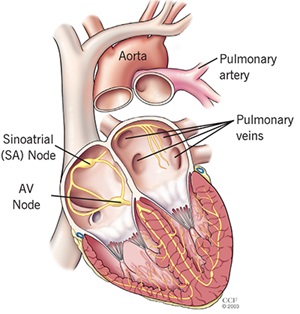 The heart’s electrical system triggers the heart beat. Each beat of the heart is represented on the electrocardiogram (ECG) by a wave arm. The illustration to the right shows a normal heart rhythm (also called normal sinus rhythm).The electrical activity in the heart is following the normal pathway, and the rhythm is relatively slow and regular (about 50 to 100 beats per minute). In patients with atrial fibrillation, the SA node does not direct the heart’s electrical rhythm. Instead, many different impulses rapidly fire at once. This causes a very fast, chaotic rhythm in the atria. Because the electrical impulses are so fast and chaotic, the atria cannot contract and/or effectively squeeze blood into the ventricle.

In patients with atrial fibrillation, many different impulses rapidly fire at once. This causes a very fast, chaotic rhythm. The heart beat is irregular and fast (100 to 200 beats per minute).

Treatment for Patients with Atrial Fibrillation

Treatment goals for patients with atrial fibrillation include restoring a normal heart rhythm (sinus rhythm), controlling the heart rate, reducing symptoms, and reducing the risk of blood clots and stroke. Many treatment options are available, including lifestyle changes, medications, catheter-based procedures and surgery.

The type of treatment that is best for you depends on the severity of your symptoms, prior treatments, and other medical conditions you may have. Medications are the first step in treatment. These may include:

Who should have pulmonary vein ablation?

Pulmonary vein ablation may be the best treatment option for patients who:

Are you a candidate for pulmonary vein ablation?

To determine if ablation is an appropriate treatment, you will have a thorough evaluation. This may include:

After the evaluation, your doctor will talk with you about what your best treatment option is and whether you are a candidate for this procedure.

How effective is the ablation procedure in treating atrial fibrillation?

Cleveland Clinic has extensive experience with atrial fibrillation ablation procedures.We carefully track our patients to be certain our data are accurate.

A single ablation procedure is less likely to cure patients who have had atrial fibrillation constantly for months or years and in patients who have extensive scarring in the atrium because of other heart disease. Nonetheless, patients with long-standing atrial fibrillation can be cured with a success rate of 50 to 70 percent, depending on their underlying heart disease and other factors. These patients are more likely to require more than 1 ablation procedure.

The long-term goal of the pulmonary vein ablation procedure is to eliminate the need for medications to prevent atrial fibrillation. Most patients can stop taking an anticoagulant a few months after the procedure because their risk of stroke is lessened.

Even patients who are not completely cured of atrial fibrillation may benefit from the ablation procedure. The procedure helps them have a better response to medications that weren’t effective in the past.

It is difficult to predict whether your atrial fibrillation will be completely cured or if you will need to keep taking medication after the procedure. Our goal is to eliminate the need for medications. This goal is achieved in most patients.

The vast experience Cleveland Clinic physicians have helps reduce procedural risks. We are equipped and prepared to quickly intervene if a complication does occur.

Additionally, the circumferential mapping technique used during the pulmonary vein ablation procedure was pioneered in the Cleveland Clinic Electrophysiology Lab.