A hemispherectomy is a rare surgery where half of the brain is either removed or disconnected from the other half. It’s performed on children and adults who have seizures that don’t respond to medicine. After the surgery, your child will have to stay in the hospital for five to seven days, and go through a lot of rehabilitation.
Hemispherectomy

What is a hemispherectomy?

A hemispherectomy is where half of your child’s brain is either totally or partly removed or disconnected from the rest of the brain. It is a rare surgical procedure done for epilepsy not responsive to medications. It is typically done in children and occasionally in adults. In these patients, the whole hemisphere is abnormal and responsible for causing seizures.

The “hemi” part of “hemispherectomy” means “half” and refers to the cerebral (brain) hemisphere – half of your brain.

Your child might need a hemispherectomy if they have these symptoms:

The symptoms listed above are associated with the following conditions and diseases:

Your child might have started having seizures and weakness early in life. Once your healthcare provider suspects drug-resistant epilepsy, you should be referred to a center that specializes in children with seizures.

What are the types of hemispherectomies?

There are two types of hemispherectomies: anatomic and functional (disconnective).

Is a hemispherectomy inpatient or outpatient?

Inpatient. Your child will have to spend time in the hospital. 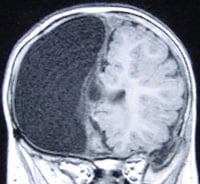 A. Coronal MRI at level of anterior frontal lobe. 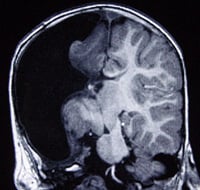 B. Coronal MRI at level of brainstem. 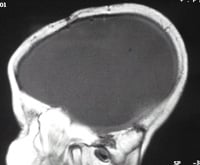 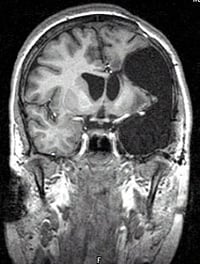 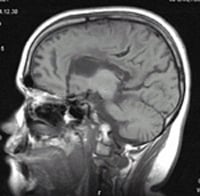 How effective is hemispherectomy?

Two-thirds of children who undergo hemispherectomy are completely seizure-free and another 15-20% have a substantial reduction of seizures. If a child has persistent seizures after an initial procedure, they should be carefully evaluated to see if they could benefit from a repeat surgery.

What complications are possible following a hemispherectomy?

Most children have excellent long-term results following a hemispherectomy. Occasionally, however, some complications may occur:

How long is the hospital stay after hemispherectomy?

After epilepsy surgery, your child will spend two to three days in the pediatric intensive care unit (PICU) for close monitoring. Antiepileptic medications will be continued.

What tests may be performed in the hospital after hemispherectomy?

A brain CT or MRI may be performed on the first morning after the operation to assess your child’s brain. Once the surgical drains are removed, your child will be transferred to a regular pediatric nursing floor. PT, OT and speech therapy will be consulted based on the child’s needs. An average hospital stay slightly varies between patients and usually ranges from five to seven days. Length of stay decisions are made by the surgical team and are based on your child’s condition and recovery.

What happens after being discharged from hemispherectomy?

Upon discharge, rehabilitation services are often required to enhance recovery from hemispherectomy. Your child may be transferred to a rehab facility for intensive physical, occupational and speech therapy. This is usually followed by home or outpatient services. Outpatient therapy can be provided through hospitals and free-standing facilities and schools. Check with your individual school system to see if this is a service provided.