The gallbladder sits under the liver on the right side of your abdomen; it stores bile. If bile duct injuries happen during surgery, the first goal is to manage any infection, leakage or blockage. Sometimes second surgeries are needed.
Bile Duct Injuries During Gallbladder Surgery

What is the gallbladder?

The gallbladder is a small, sac-like organ that sits under the liver on the right side of your abdomen (belly). The gallbladder stores a greenish fluid called bile. Bile is made and released by the liver and then sent to the small intestine, where it helps the body break down and absorb food. Bile moves through a network of tube-like structures called bile ducts. 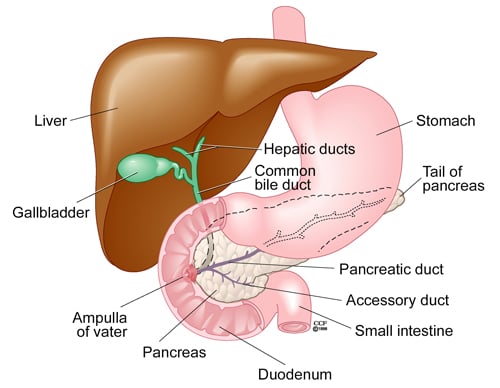 Why would I need gallbladder surgery?

Sometimes, small, hard masses called gallstones form inside the gallbladder. These stones can cause swelling, pain, and infection. Gallstone disease is one of the most common digestive system disorders. It is the most common reason for gallbladder surgery. Surgery to remove a diseased gallbladder is called a cholecystectomy. You can live normally without a gallbladder, but you might need to make some changes in your diet.

A common type of gallbladder surgery, called laparoscopic cholecystectomy, is done through a few small cuts in the abdomen. For this type of surgery, a camera and light are attached to a scope and are placed into one of the small cuts. The camera projects a live-action video of the inside of the abdomen onto a screen near the surgical table. The doctor looks at the screen and uses the video to guide his or her movements. The doctor then takes out the gallbladder with surgical tools placed in the other small cuts. Benefits of laparoscopic cholecystectomy over open surgery include less pain, less time in the hospital and quicker recovery. It is now considered the “gold standard” for surgical treatment of gallbladder disease.

What is a bile duct injury?

A bile duct injury is damage to the bile ducts that happens during gallbladder surgery. A bile duct can get cut, burned, or pinched. As a result of an injury, the bile duct will not be able to work right, leaking bile into the abdomen or blocking the normal flow of bile from the liver. Bile duct injuries lead to symptoms that can be painful, even deadly, if not treated.

How common are bile duct injuries during gallbladder surgery?

The numbers vary by study. Some estimate that bile duct injuries occur in 1 in 1,000 cases of laparoscopic gallbladder surgery. They appear to occur less often in open surgeries.

Most bile duct injuries that occur during gallbladder surgery happen because the area around the gallbladder and bile ducts is masked in some way so that the doctor cannot see it clearly. This can happen if the area’s structure (anatomy) is different than normal, or if there is a lot of bleeding, swelling, or scarring in the area.

How will I know if I have a bile duct injury?

Some bile duct injuries are found by the doctor at the time of surgery. If not, the first sign of a bile duct injury is failing to recover quickly after the procedure. Other symptoms might include:

How are bile duct injuries that happen during gallbladder surgery diagnosed?

In about 10% to 30% of cases, bile duct injuries are found by the doctor at the time of surgery. He or she might notice leaking bile or a blockage by sight or by using a test called intraoperative cholangiography (IOC). IOC is an X-ray exam of the bile ducts after a dye has been injected to make the flow of bile clearly visible on the X-ray image.

If your injury was not found during surgery, tests your doctor might use to help diagnose a bile duct injury include:

How are bile duct injures treated?

The first goal of treatment is to manage any infection, leakage, or blockage caused by the injury. Then, the doctor may need to reconstruct the bile duct, often using a piece of intestine to bypass the blockage or the area where the duct was cut or burned.

In some cases, if the doctor finds the bile duct injury during surgery, he or she is able to repair it at that time. In other cases, if the injury is complex, it might require a second surgery by a specially trained doctor.

Can bile duct injuries during gallbladder surgery be prevented?

Some doctors think that using IOC more often will help reduce the number, or severity, of bile duct injuries, while other doctors believe that not all injuries can be prevented, even with IOC. Other doctors suggest that changes in how the surgery is performed and the equipment used will reduce the number of injuries. However, not all bile duct injuries can be prevented, so they remain a possible risk of gallbladder surgery.

What is the outcome for patients with bile duct injuries?

The outcome depends on the type and extent of the injury and how soon the injury is found. Most bile duct injuries can be successfully repaired, and the patient can go on to have a good quality of life. In severe cases, with more than one surgery, many months of recovery might be needed.