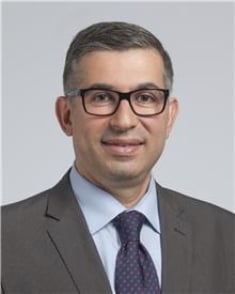 Dr. Jihad Kaouk is an American Board certified Urologist who helps patients within Cleveland Clinic's Glickman Urological & Kidney Institute as the Director of the Center of Advanced Laparoscopic and Robotic Surgery. He also serves as a Professor of Surgery at the Cleveland Clinic Lerner College of Medicine of Case Western Reserve University.

Complementing his role as Director, Jihad Kaouk, MD, holds the position of Institute Vice Chair for Surgical Innovations and the chair holder for the Zegarac-Pollock Endowed Chair in laparoscopic and robotic surgery in the Glickman Urological & Kidney Institute. Dr Jihad Kaouk is listed in Who's Who in America and Top Docs in America and recently listed on Microsoft academic search as one of the top 10 authors in urology world wide.

As such, he has performed groundbreaking surgical procedures, including the first robotic single port surgery through the belly button in 2008 and the first completely transvaginal kidney removal in 2009. These procedures, executed by Dr. Kaouk and his team, proved minimally invasive enough that the hospital discharged the patient within a day of the operation. Dr. Kaouk has one of the largest experiences in robotic surgery in the country with more than 2,500 robotic radical prostatectomy and about 900 robotic partial nephrectomy that he performed through the last 20 years. Recently, Dr. Kaouk patented a device for radiofrequency cauterization and the extraction of tissue used mainly during partial nephrectomy.

Since 2005, Dr. Kaouk has served on committees at the national and local levels. From 2005 to 2008, he belonged to the American Urological Association’s Urologic Diagnostic and Therapeutic Imaging Task Force, and from 2006 to 2010 he was on the Guide Panel of the Management of Incidentally Discovered Renal Masses committee.

Dr. Kaouk has lectured in more than 130 scientific meetings, chaired more than 20 urologic meetings and performed live surgery demonstrations in 18 medical centers worldwide. He has more than 260 peer reviewed scientific publications, 18 book chapters and hundreds of scientific abstracts and surgical illustration movies. Dr. Kaouk received 32 honors and awards for his work in the professional field, including the Cleveland Clinic innovator award (which he won twice) and best surgical illustration movies. Prior to establishing his reputation as an innovative practitioner, Dr. Kaouk earned his medical degree from the American University of Beirut Medical Center and completed his Internship in General Surgery and his Residency in General Surgery and Urology at the same establishment.

Presently, Dr Kaouk holds membership with the American Urological Association, the Endourological Society, the Society of Robotic Surgery, and the Lebanese Order of Physicians. He possesses active medical licenses to practice in the states of Ohio, Utah and Indiana.

Consulting and/or Speaking. Dr. Kaouk receives fees of $5,000 or more per year as a paid consultant, speaker or member of an advisory committee for the following companies:

The Doctor explained everything about the steps for my tests and procedure(s). He answered my questions with sincerity.

My experience was excellent! Dr. Kaouk and his team were timely and well informed regarding my case! They answered all my questions and provided great options for my continued care and recovery!

From the very first time I met Dr. Kaouk and his team, everyone has been wonderful! They pursue excellence in providing the best care and plan for their patients! Their professionalism, knowledge, expertise, and compassion have impacted my life in such a positive way, and I have been greatly encouraged throughout the entire journey! I have already recommended this team to other people that I know!

Dr was very kind and explained every option to me.

I loved Dr Kaouk gentle approach. He seemed to genuinely care about me. Very very kind man to me and to his staff

Dr. Kaouk is a very very good doctor. I have an advertising agency and work with Hospital in New York state. Familiar with this space. He is so kind and communicative . Glad to have him as my doc

Dr put me at ease. Explained everything in detail. Drew diagram of procedure. He was patient and understanding. He didn't rush consul

Great Team. Especially like getting a call before the appointment from a doctor regarding my question on MyChart.

The dr and the pa were absolutely amazing!

Dr. Jihad Kaouk and his team have provided exceptional and expert care throughout my entire experience! I couldn't be more blessed and pleased with the dedicated service provided for me, as a patient, and my family at Cleveland Clinic, under the consummate care of Dr. Kaouk! I have already recommended him and the excellent services of Cleveland Clinic to many people!

He is simply the best MD I have ever known/been treated by. Gifted, class personality and genuinely caring.

Dr. Kaouk was outstanding. He was intelligent and articulate without ever being condescending. He was empathetic and quite patient as he addressed our many concerns and questions. I was very impressed with his demeanor and expertise. Would recommend him without reservation!

The doctor is amazing and I have the utmost confidence in his care for my situation.

Doctor and assistant were great.

Dr. Kaouk is brilliant, thorough and kind. I'm blessed to have access to such a great surgeon.

Doc is the best

Dr. Kiok It's very good at what he does and should be commended on the way he treats his patients and his actual skills

The doctor and his entire staff are the best.