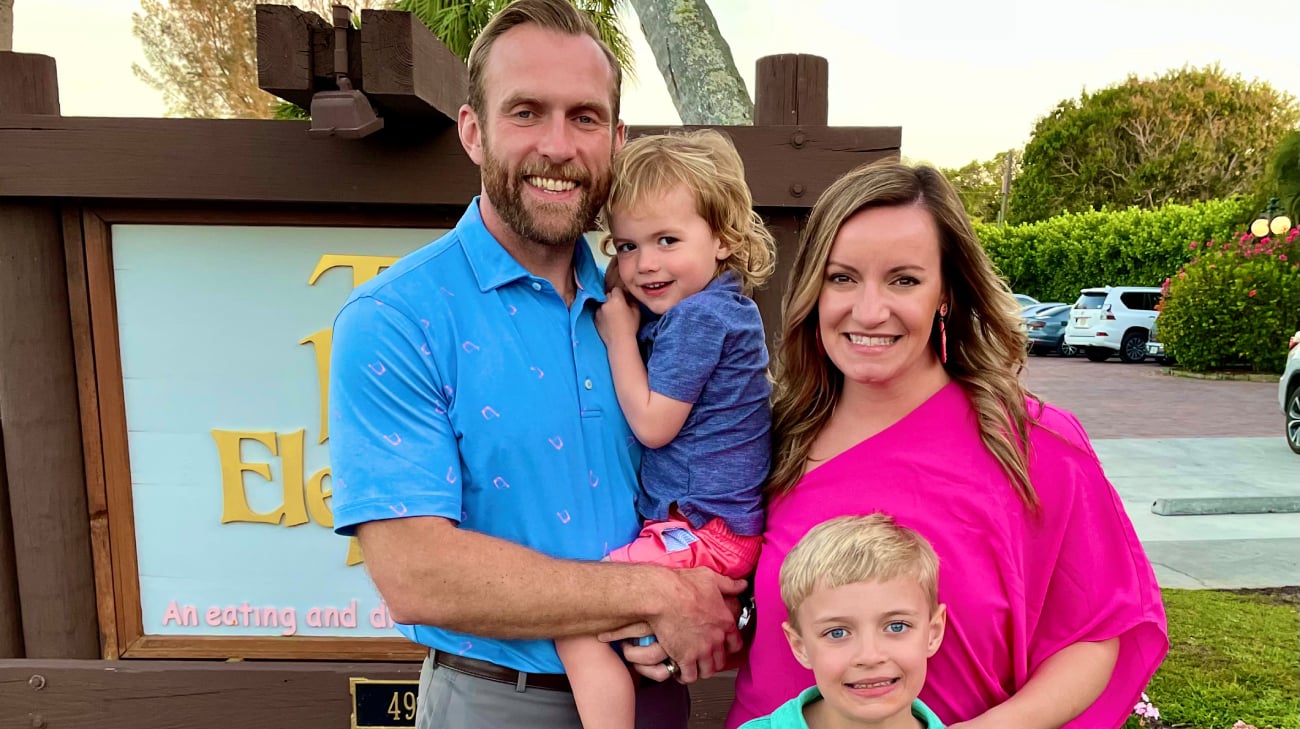 In the summer of 2020, Jennifer (Jen) Wallace and her family had been living in Indianapolis for several months. She had given birth to her second son in her hometown of Columbus, Ohio, just weeks before they moved for her husband’s job.

“Because of the pandemic, I hadn’t found a primary care physician, but when I began having heart palpitations I quickly made an appointment,” says Jen, who following a complete physical was diagnosed with a heart murmur and hyperthyroidism (known as Graves’ Disease) which can cause symptoms including an increased heart rate. “We weren’t thinking I had a cardiac issue, but I was referred to a cardiologist just in case,” she adds.

An echocardiogram showed Jen might have a sinus of Valsalva aneurysm (SOVA), a congenital heart condition that involves a rare abnormality of the aorta, the largest artery in the body. Because she had a comfort level with medical care in Columbus, Jen returned there for a second opinion. A transesophageal echocardiogram (TEE) confirmed the SOVA diagnosis. It also showed the aneurysm had ruptured into her right atrial chamber, resulting in an abnormal connection between the high pressure aorta and low pressure atrium, forcing the right side of her heart to pump too much blood.

Because this diagnosis is quite rare, doctors presented Jen with two options for follow up care – a hospital in Columbus or Cleveland Clinic.

“I was familiar with the Columbus hospital, but knew Cleveland Clinic is number one in the nation for cardiac care. My online research showed that Dr. Douglas Johnston, a cardiovascular surgeon at Cleveland Clinic, does between five or six SOVA surgeries a year, which is a lot considering how rare the condition is,” says Jen, who scheduled a virtual visit with Dr. Johnston in November 2020.

“People come here from across town, across the country and across the world. In one or two visits we’re able to thoroughly evaluate and assess their situation in preparation for surgical intervention,” says Cleveland Clinic cardiologist Nicholas Ruthmann, MD, MPH. “When Jen came in, she saw me and Dr. Johnston, had pre-operative bloodwork and an array of tests in the same day.”

Providers in Columbus had suggested Jen would need a full sternotomy and mechanical valve, which would require her to take Coumadin, an anticoagulant/blood thinner.

Further imaging tests and discussion among the multidisciplinary care team at Cleveland Clinic led to a different decision regarding surgery. “Jen’s anatomy was very well preserved other than the defect. We felt we could fix the rupture and preserve everything as is – the ideal situation for someone young, healthy and active,” says Dr. Johnston.

Dr. Johnston performed a hemisternotomy, repairing the defect using Jen’s own tissue and preserving her own valve, allowing her to quickly return to her normal activities and have a normal lifestyle with no restrictions.

Jen and both physicians agree on the importance of her taking action as soon as she felt the palpitations.

“If you feel something, do something,” says Dr. Ruthmann, who had a post-surgery follow up appointment with Jen who is now being routinely monitored by a local cardiologist. Dr. Johnston concurs, praising Jen for getting checked out and giving credit to the physician who did the first echocardiogram which started the entire process.