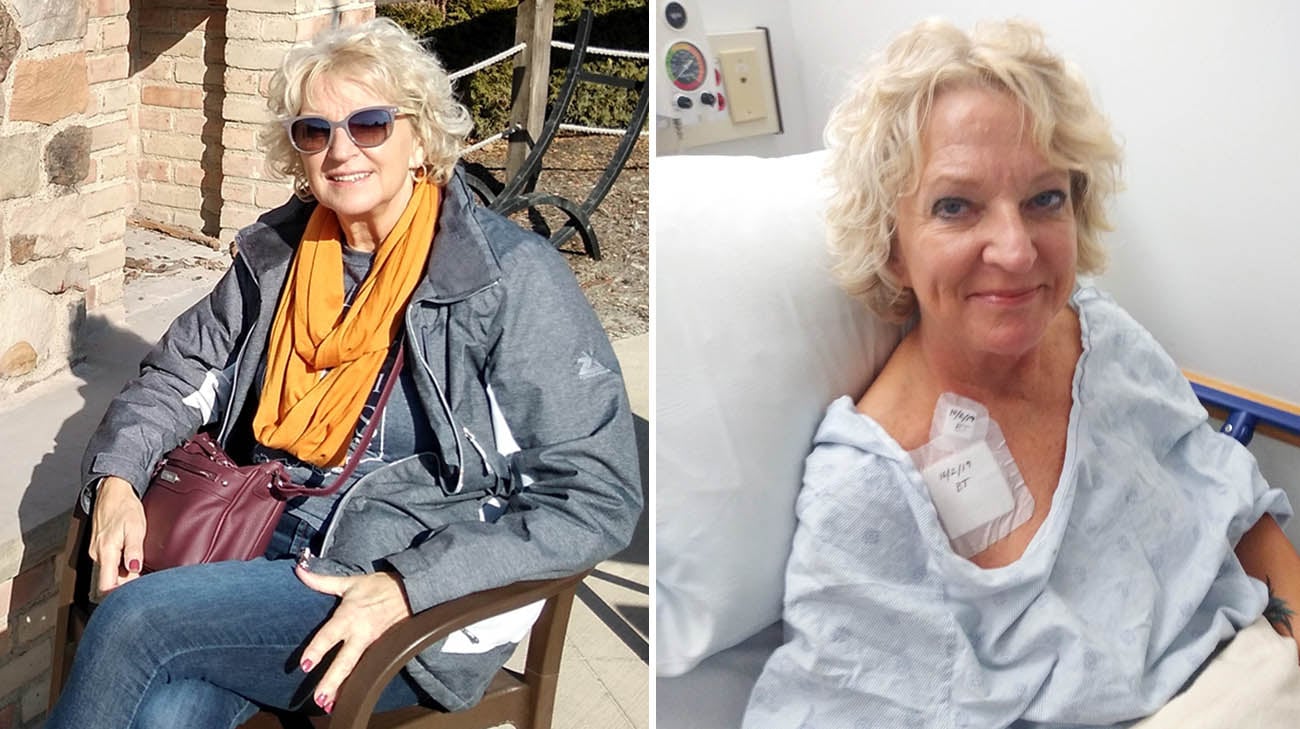 His very first patient, on his first day of work at Cleveland Clinic Cancer Center in September 2019, proved to be a memorable one for medical oncologist Suneel Kamath, MD. Looking at her medical chart, Dr. Kamath was surprised by how quickly 62-year-old Cindi Terwoord, of Berea, Ohio, had sought treatment after noticing blood in her stool just a week earlier.

“I was impressed by how little time passed from when she first presented with symptoms, to how fast she got to (her local) hospital, and then got in to see us at Cleveland Clinic,” notes Dr. Kamath. “I think her quick reaction definitely aided in her positive outcome.”

Still, Cindi had advanced cancer. An oncologist at a hospital near her home, identified her sudden symptoms as stage 4 colorectal cancer. This form of cancer often metastasizes and spreads to the liver or other parts of the body.

“It was quite a shock,” says Cindi, of her diagnosis, “because my husband Joe and I have always been very health conscious, but I never had the notion I could die. I’ve always been optimistic – a glass half-full person. I don’t see any benefit from getting depressed.” 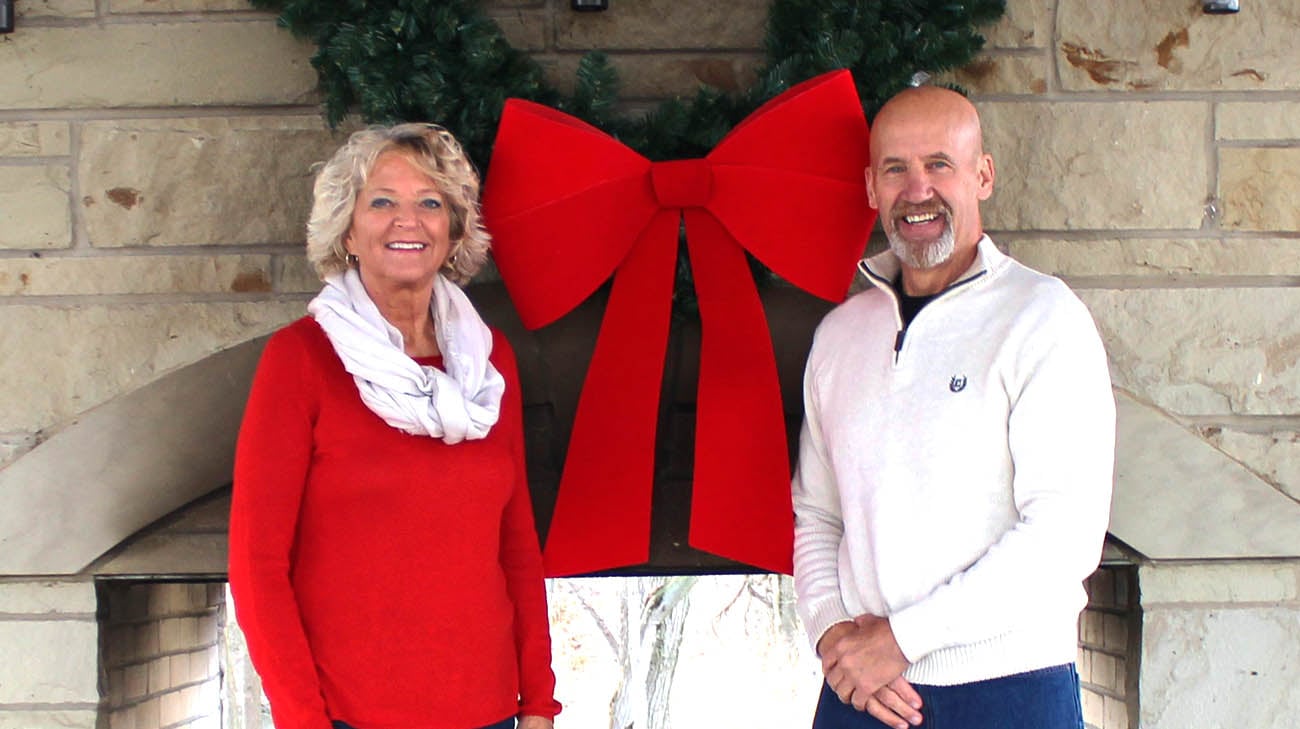 Cindi was surprised to learn she had advanced colorectal cancer since she and her husband have always tried to be very health conscious. (Courtesy: Cindi Terwoord)

And that positive mindset really paid off. The day after noticing blood in her stool, Cindi headed to her local emergency department on a Thursday afternoon. By Saturday morning, during a two-day stay for observation, she underwent a colonoscopy, received the results that afternoon, and on Sunday, was on the phone with a friend who had also experienced cancer. “I like to do my research,” Cindi adds.

The friend, a 10-year cancer survivor, had one piece of advice: “He told me: ‘You live near one of the best hospitals in the nation. You call them up, tell them what’s going on and then run right over to Cleveland Clinic.”

That’s exactly what she did. While Cindi continued getting diagnostic tests at her local hospital, she scheduled her first visit with Dr. Kamath for the following week. In the meantime, she consulted with the local oncologist, who recommended she begin chemotherapy immediately.

Fortunately, Cindi decided to wait the few days until her Cleveland Clinic consultation, and it’s a good thing she did. If she had begun chemotherapy, she would have been ineligible for a clinical trial Cleveland Clinic was participating in and accepting participants for at the time.

The phase 2 trial paired an approved immunotherapy treatment, called nivolumab, with an investigational anti-tumor vaccine. Those medications would be supplemented by chemotherapy. When Cindi learned she was eligible for the trial (which is no longer accepting new patients), she agreed to participate without hesitation. 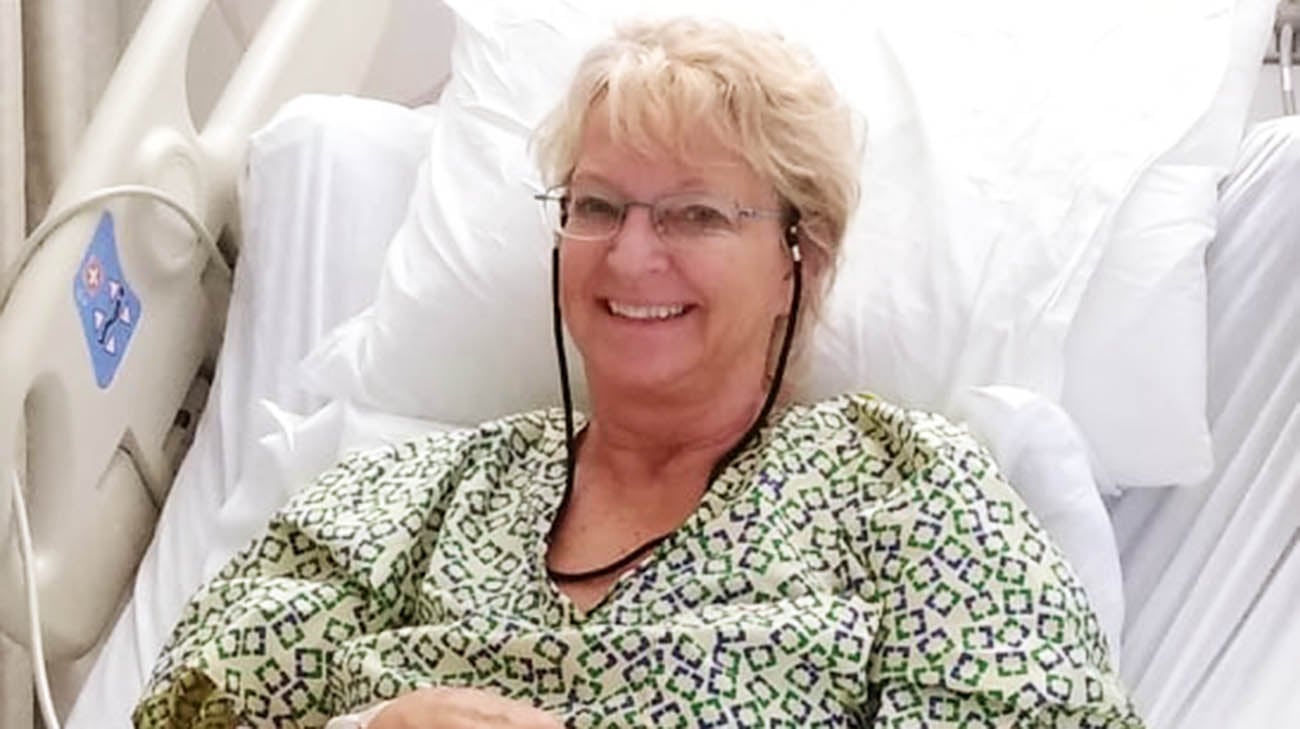 After additional testing, including a liver biopsy to gauge the presence of cancer, her experimental treatment regimen began in October 2019. The goal was to shrink any tumors in her colon and liver, thus making it easier to remove them surgically in the future.

Unlike conventional treatment for stage 4 colorectal cancer, the protocol for Cindi, as a trial participant, involved getting rounds of the immunotherapy drug and the investigational vaccine, administered through a port that had been placed under the skin, in her right upper chest. Every other week for two months, Cindi received all three treatments, including chemotherapy.

True to her nature, she conducted her own thorough research on how to counteract nausea, nerve-ending pain and other potential side effects of chemotherapy. That included embracing cooling therapy, in which she wore freezer-cooled hand mittens and socks to prevent chemo from reaching the nerve endings of her hands and feet. She would also use a ginger-based nose spray to suppress nausea. Joe would feed her ice chips to counteract the metallic taste in her mouth that occurred during her first chemotherapy treatment, help her stay hydrated and prevent cold sensitivity in her mouth and tongue. 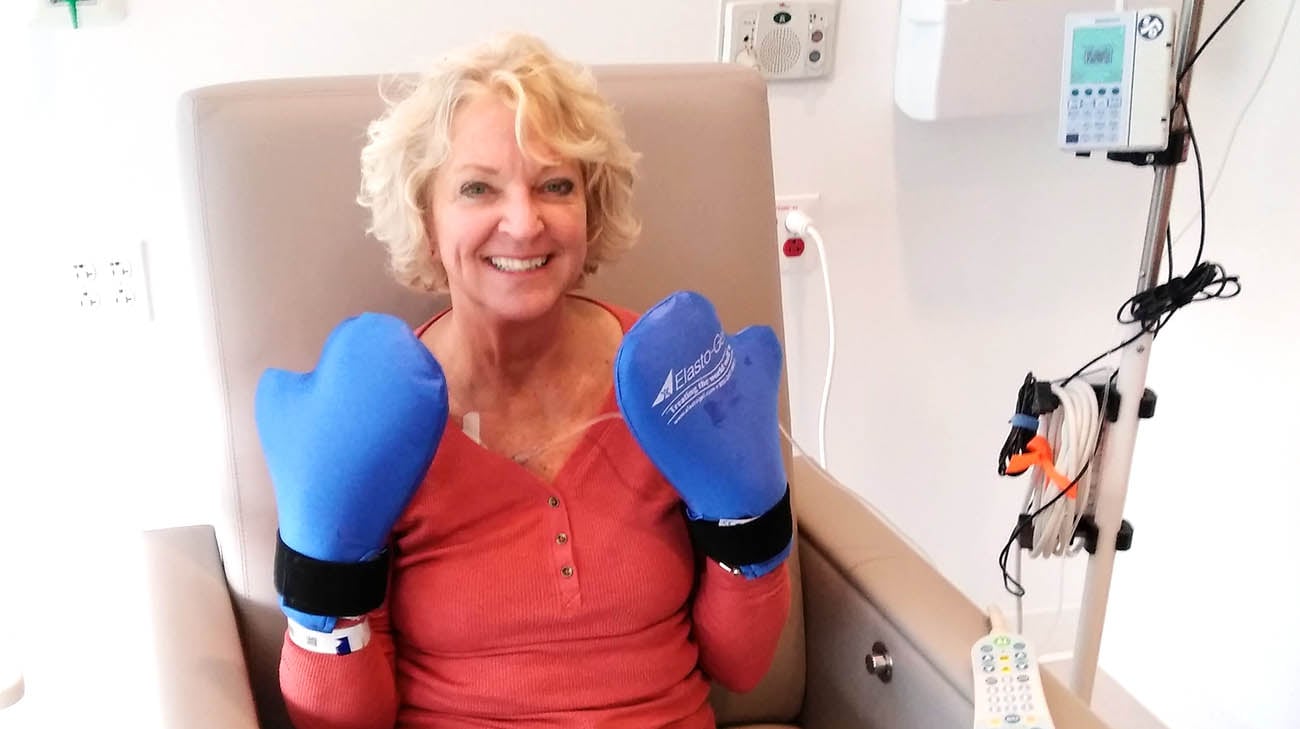 Cindi wore freezer-cooled hand mittens and socks to prevent chemotherapy from reaching the nerve endings of her hands and feet. (Courtesy: Cindi Terwoord)

As she describes it, “We looked like we were going on vacation, with my cooler and computer bag (the latter, for watching movies during her hours-long treatments). Fortunately for me it worked. The nurses would always tell me how good I looked every time I came in.”

Following her fourth treatment, Cindi was required to wait four weeks before liver surgeon Frederico Aucejo, MD, and colorectal surgeon Michael Valente, DO, collaborated on an operation to remove any remaining cancer. Amazingly, says Dr. Kamath, the surgeons removed more than a foot of her colon, numerous spots in her liver and a tumor in her abdominal lining, none of which had any living cancer cells remaining.

“That was an unexpected and extremely pleasant surprise,” according to Dr. Kamath. “The immunotherapy, chemotherapy and vaccine had killed all the cancer. Since her trial ended, she’s had no (further) treatment for more than a year now and the cancer has not returned.”

Cindi responded well to treatment and quickly gained her health back. She had her port removed. She resumed her home-based transcription service and continued rigorous exercise and healthy eating.

Dr. Kamath has been impressed by Cindi’s ability to overcome an often-vexing disease with such ease and grace. “She is a living testament to the importance of not ignoring symptoms and just hoping they’ll go away,” he says. “We’re seeing more cases of colorectal cancer in younger people. So, if something doesn’t feel right to you, go see your doctor right away.”