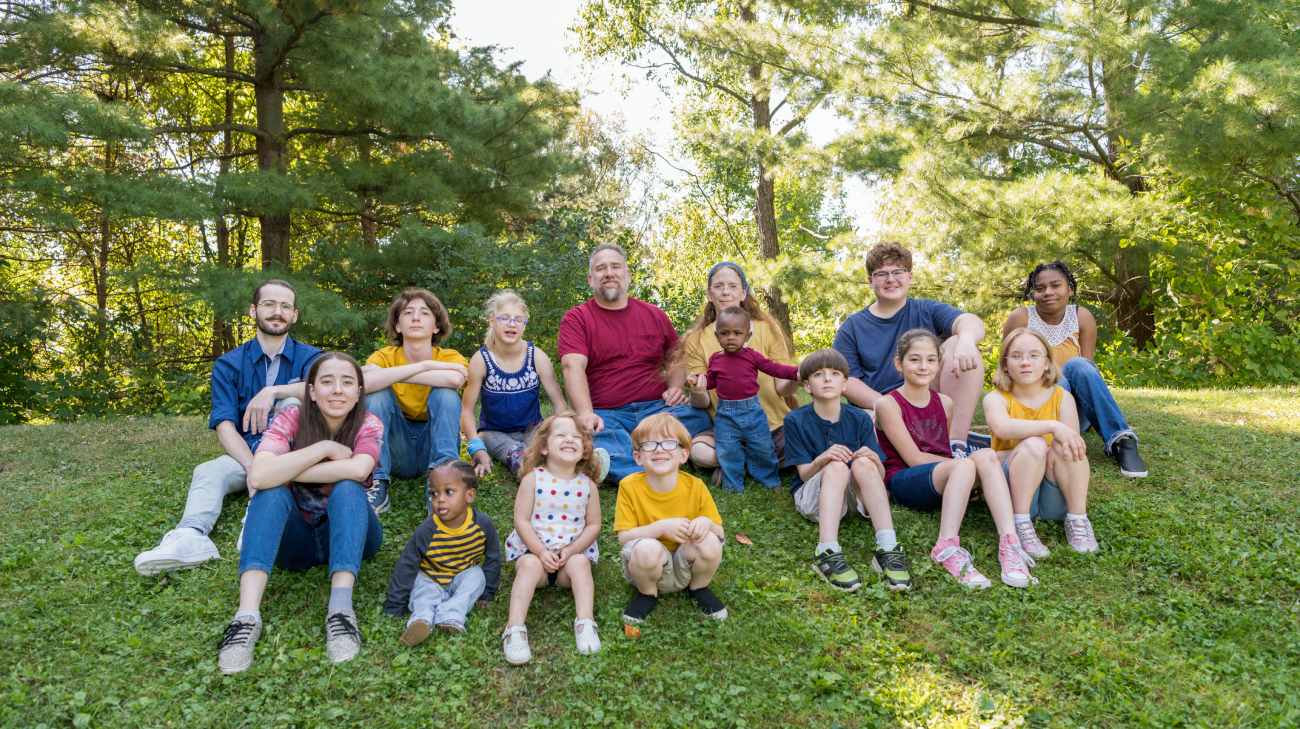 For the Grandt family of Mogadore, Ohio, Cleveland Clinic Children’s outpatient therapy services are central to their lives. Every week, five of Liz and Michael Grandt’s 13 children receive treatment from physical, occupational and speech therapists at the Stow-Falls Express and Outpatient Care site.

Liz and Michael each had children from former marriages when they married in 2015 — her six, including an adopted foster child, and his son, Lucas, now 15. She says they both felt called to have a larger family and to help children with special needs.

Hannah and Wren, both 13 and unrelated by birth, were adopted in Ukraine in 2018. They started life at the same orphanage, but Hannah, who has cerebral palsy, was transferred to an adult mental institution at the age of 7. While there, she received little to no attention, schooling or medical care. The orphanage where Wren remained lacked the means to address her health conditions, including a heart disorder and trouble with impulse control.

Hezekiah, 20 months old, and Ezra, 8 months old, were adopted in the U.S. Hezekiah has spina bifida, and Ezra has problems with muscle tone. Biological son Judah, 4 years old, is being treated for mood regulation.

With regard to adoption, Liz says, “I feel that kids need to get out of orphanages, that they are worthy of a life, and I wanted to adopt children with down syndrome or cerebral palsy. I was the only child of a single mom and always loved being around children, and my husband had 13 siblings while growing up and always wanted a big family. When he met me with my six kids, he knew I wanted more, too, and he was open to adopting.”

The family isn’t wealthy, she says. “We just get by — but we’re really frugal. People helped us with money for the adoptions, and I was selling and making things. Somehow, the money has always come in.” Liz adds that they went on their first family vacation in four years this summer. “We got a really old camper and fixed it up. My husband took some time off work, and we drove to Florida and had a blast. We stayed at campsites, went to grocery stores and cooked our own food. We have a different lifestyle, but we enjoy it.”

The couple has high expectations of each child, regardless of individual challenges, she says.

“We have lots of faith, flexibility and empathy. I tell my children, ‘I know you can do better, and I believe in you.’ I don’t know who my kids will be, but we want them to be happy and kind.”

Finding a therapy group willing to sync all five children’s appointments each week was a challenge for Liz, which is one reason she chose Cleveland Clinic Children’s. “At the Stow-Falls location, they were amazingly accommodating, and they have a great team,” she says.

Regina Thompson, a physical therapist at the Stow-Falls site, says, “When you get to know a family like the Grandts over many years, it’s professional, but it can become personal. We want to see the best for them. Their case is unusual because of the number of children coming in for therapy.”

Regina adds that it’s important to the children’s success that they come in consistently, so it’s best to reduce the number of trips for therapy by scheduling them in a family-centered way. “If we can help them with back-to-back appointments, their attendance will be better, and they will have better outcomes. We always do our best to make it easy for the family, to work with them on their specific goals for their children, to ask what they need help with at home.”

Also on the Grandts’ Stow-Falls team are occupational therapists Ann Donnelly, Sarah Roetzel and Alyssa Lee — who help the children learn how to play, dress and eat — and speech therapists Marissa Lavigna and Jackie Rife. 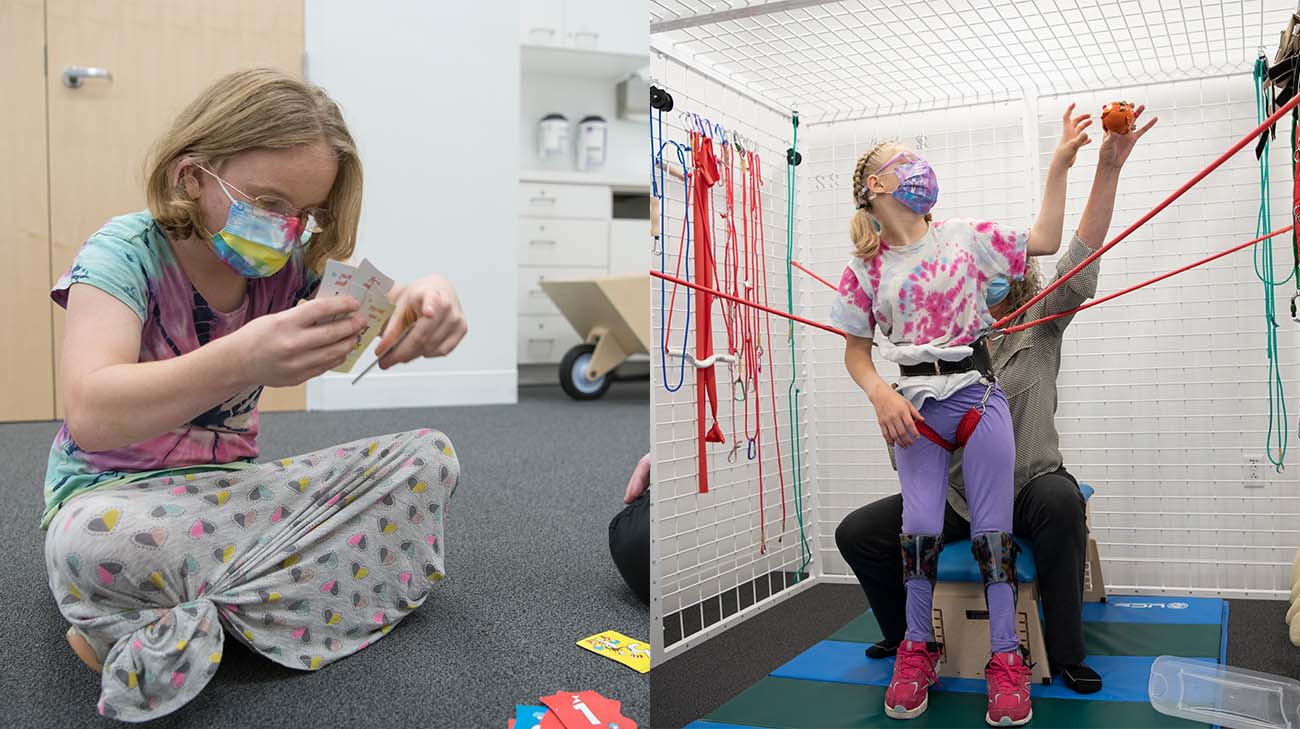 “Hannah had almost no medical care in Ukraine,” she adds. “She was in sore need of therapy and surgeries right off the bat. She didn’t know how to chew food because she only had eaten gruel – basically, oatmeal or pureed borscht – so she needed feeding therapy. Now, she knows how to take bites and chew and can eat more normal foods like peanut butter sandwiches and chicken nuggets.”

Both girls’ communication skills have improved markedly with therapy, Liz says. “Hannah used to say very few words because, where she lived, nobody had talked to her or expected her to talk. We’ve now gone from one word, like ‘potty’ or ‘eat,’ to whole sentences. Wren has a genetic condition and mixes up word order. She went from being unintelligible to having a conversation with a stranger who can understand 80 percent of what she’s saying. They both love therapy and therapy day. They love everybody there and are sad if they miss a week.”

Judah, Ezra and Hezekiah also are making progress with therapy, she says. 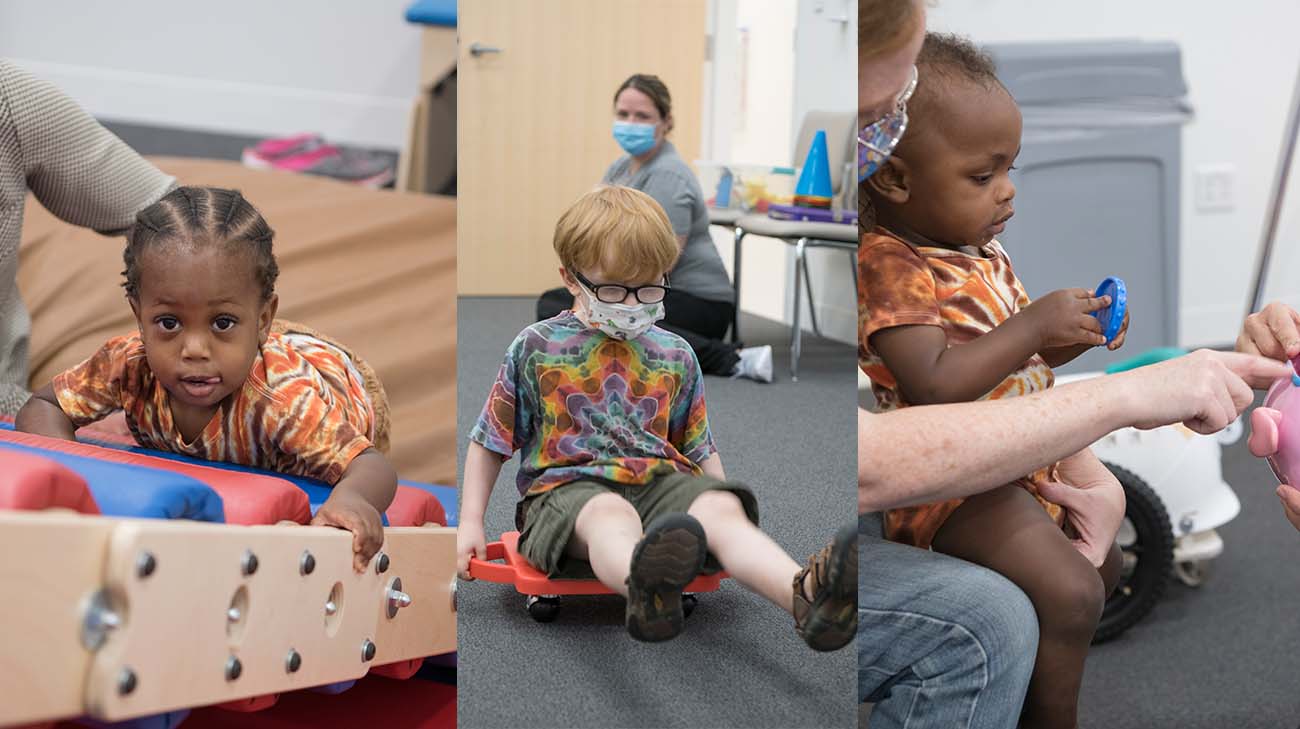 Liz notes that, in addition to providing treatment that helps the children move better, Regina assists the family in other ways. “She helps us order equipment and get what the children are entitled to from various agencies. She goes above and beyond what is expected or required. Whatever will benefit our children, she will do. Everyone there is like that. They know all of our names and they ask about our other kids, too. They really care.”

Regina says that Hannah, Hezekiah and Ezra will have lifelong needs for orthotics, braces, walkers and communication devices. “Early intervention is really important for children who have diagnoses like these, and intervention from birth to age 3 produces the most effective change,” she says. “Hannah and Wren missed the early intervention window, but we gave them a lot of therapy and they’ve made some really good changes.”

Cleveland Clinic Children’s therapists help educate families about what to expect going forward. “We plan everything together,” Regina says. “If we know a surgery’s coming up, we help prepare them for that. We help them understand typical childhood development and behavior management. We can work through things like temper tantrums and guide parents to do the same thing at home.”

For Liz, who has certification in child development and has worked in daycare and as a nanny, this kind of support is especially appreciated.

“It’s valuable to have a different person’s perspective, to be asked, ‘Have you tried this?’ That can be huge,” she says. “The tools they give parents are so incredibly beneficial.”

Regina says that she and the therapy team are moved by the Grandts’ dedication to their family. “I think everybody here would agree that they have great faith and feel it is their mission and calling to take care of these children. They see value in every human life and are very much for their children. They’re a close-knit family. It’s inspiring to watch.”

For her part, Liz says, “After three years with Cleveland Clinic Children’s, I have only good things to say. Everyone there is super nice and super helpful and awesome — from the people who answer the phones to the therapists. I recommend them to everyone I know.”