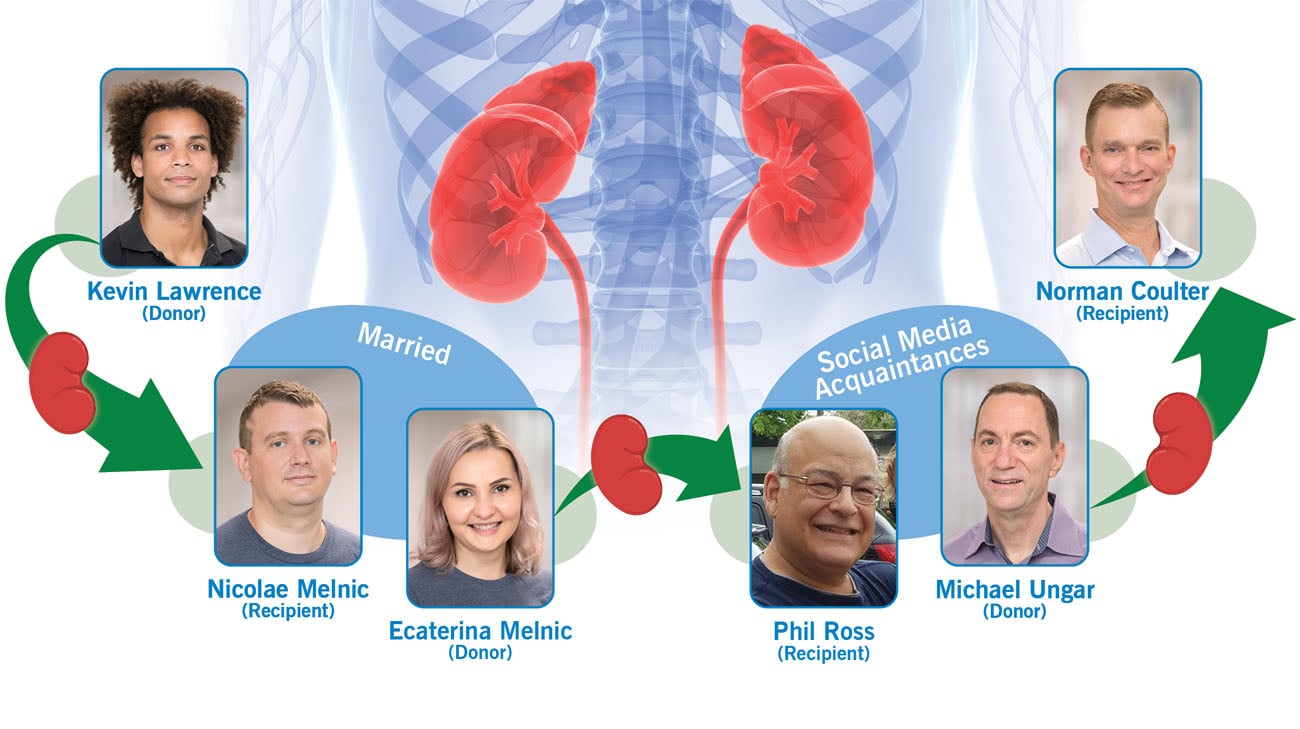 Her husband desperately needed a kidney, so Ecaterina Melnic wanted to donate hers. Unfortunately, her frame is much smaller than Nicolae Melnic’s, and they weren’t a good match. So, Ecaterina donated her kidney to Phil Ross, whose acquaintance, Michael Unger (they met through a social media page seeking a kidney donor for Phil) had also offered up his kidney.

Since Michael and Phil weren’t a match, he instead donated his kidney to someone he did match with, Norman Coulter, who – like Phil -- also desperately needed a kidney transplant. Nicolae, too, received a kidney from another altruistic donor, Kevin Lawrence, who just wanted to help somebody.

The connections may be confusing to many people, but not to the Kidney Transplant Team at Cleveland Clinic, which arranged the six-person kidney swap (three donors and three recipients) that was completed over a 5-day period in May 2021.

Alvin Wee, MD, one of the surgeons involved in the kidney swap, said these types of pairings are becoming more commonplace at Cleveland Clinic, which strives to find and match participants within its own extensive healthcare system. A match occurs when the donor and recipient have the same blood type or tissue type.

“We have a big system and our first default is to arrange swaps internally, because you can better control everything and everyone involved,” explains Dr. Wee, who is program director of Renal Transplantation at Cleveland Clinic’s Glickman Urological and Kidney Institute. “You know the entire team and don’t have to worry as much about logistics.”

Indeed, finding the right match between recipients and donors can be a logistical challenge, and is one of the reasons why the average wait time for individuals needing a kidney is 679 days, according to the National Foundation for Transplants. Phil Ross knows firsthand the difficulty in finding both a willing donor and one who is a medical match, based on his own experience when his kidney condition rapidly deteriorated during a vacation in Utah last year. 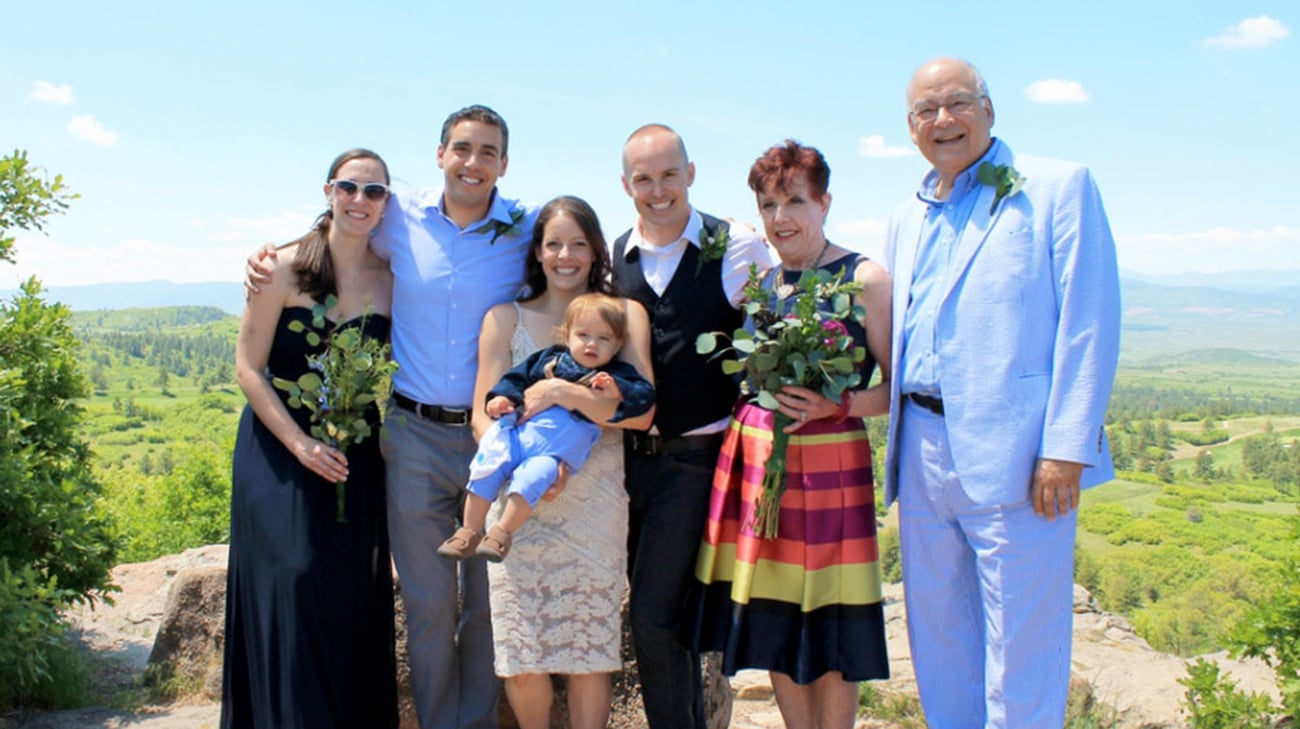 Phil's family rallied around him to help him find a kidney donor. (Courtesy: Phil Ross)

A sophisticated social media campaign, centered on a website called Papa Phil Can, His Kidneys Can’t, garnered well over 125 responses. But no perfect matches. “I appreciated that so many people tried to help, but we kept hitting dead ends,” says Phil, 68, who pursued transplant opportunities in Michigan, Ohio and California. “I had gotten to the point where I needed to begin getting kidney dialysis.”

And then, the phone rang. The caller was Dr. Wee, who informed Phil a donor had been found for him and that his transplant was scheduled for May 24, 2021. “I just about fainted,” Phil recalls. “It was quite a shock. And that was when he first explained to me about the chain of people involved in the kidney swap. I learned that if Michael hadn’t donated in my name, I wouldn’t have been part of the swap.”

Michael Ungar heard about Phil’s need for a kidney through mutual friends in the Jewish community. While Michael, who is a rabbi and personal trainer, hadn’t met Phil, he had become interested in becoming a donor since a member of his congregation had undergone a kidney transplant a few years earlier.

“It comes down to this,” says Michael. “You have the chance to save someone’s life or dramatically improve the quality of someone’s life. Dialysis is no way to live, and it’s actually puzzling to me that I waited so long to do this. It’s a big commitment, but it’s very safe.” 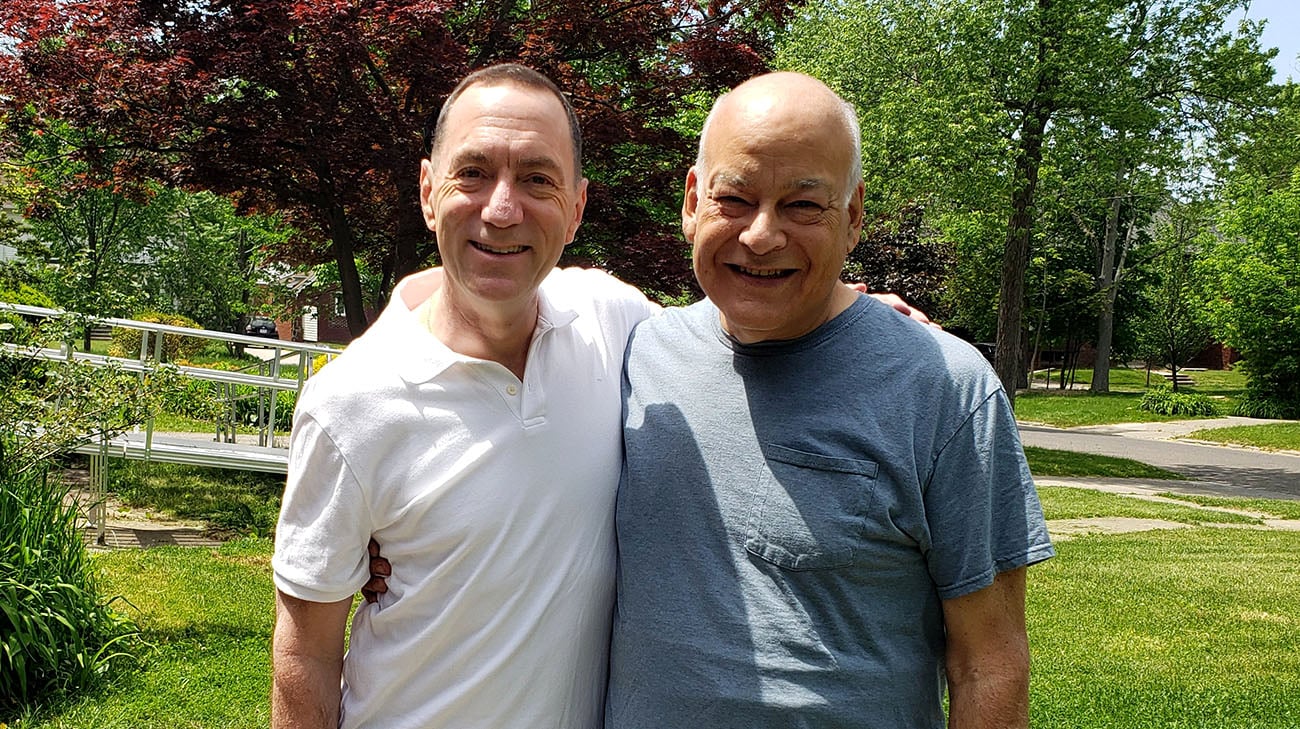 Michael heard about Phil's story through social media and decided he would donate his kidney. (Courtesy: Phil Ross)

Like most donors these days, Michael underwent a minimally invasive laparoscopic procedure to remove his kidney, called a nephrectomy. Because the incisions are small, laparoscopic donor nephrectomy typically reduces postoperative pain and produces shorter hospital stays, as patients experience a quicker return to daily activities.

Dr. Wee made four minor incisions to remove Michael’s kidney, leaving him with what he calls “my C-section scar.” For two weeks after surgery, Michael took it easy but was back at work – and also exercising – soon afterwards. “By six weeks, I was about 100% back to normal, ready and raring to go,” he says.

In a single-port kidney transplant, the surgical tools and donated kidney are all placed through one small incision. (Courtesy: Cleveland Clinic)

In the hospital just three days, Phil has only a 5-centimeter scar on his abdomen. “I had no pain from the surgery. In fact, I never took a pain pill. It was remarkable.”

A few weeks after the operations took place, the donors and recipients – at their request – met for a celebratory dinner at a restaurant in Cleveland Heights, Ohio. They invited family members and Dr. Wee to the dinner, too. The group made a special tribute to Kevin, who made the whole life-saving exchange possible with his decision to donate a kidney to anyone in need.

“It was amazing,” says Phil. “It was a wonderful experience and very emotional for all of us.” 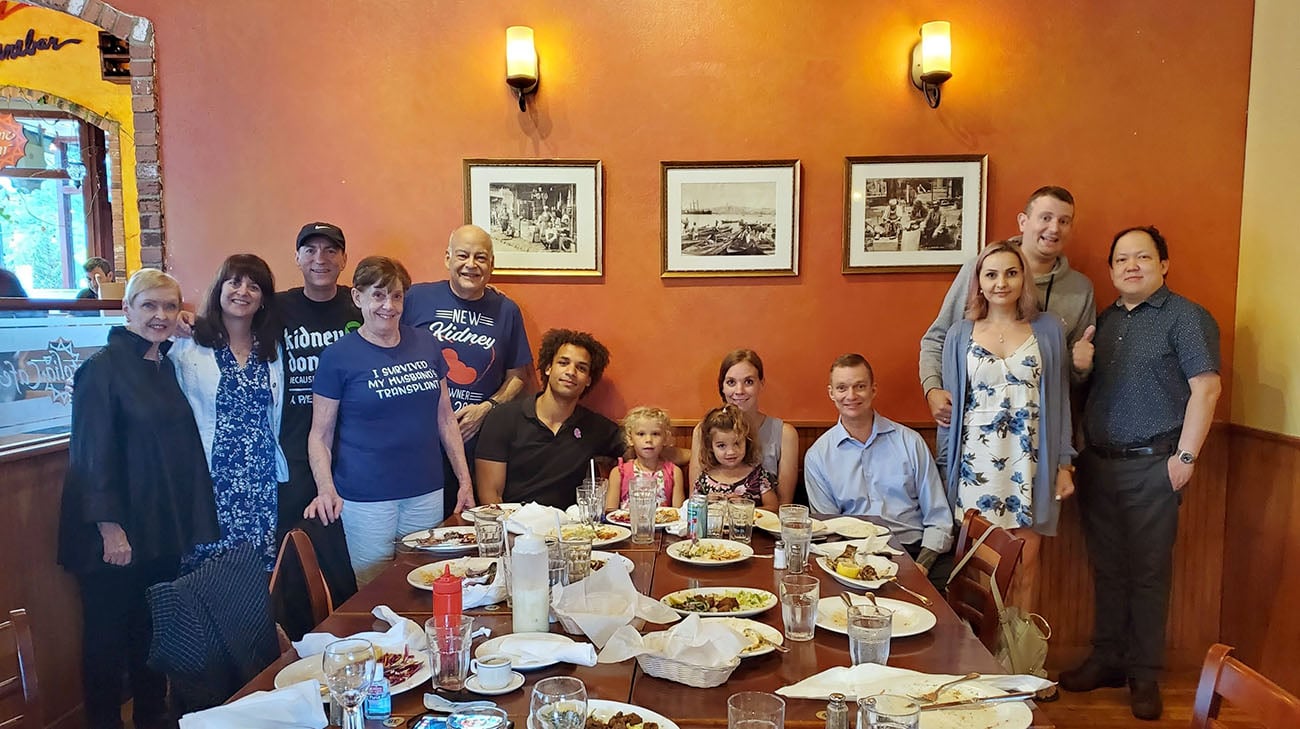 All six donors and recipients met, along with their families and Dr. Wee. (Courtesy: Phil Ross)

Michael, too, has fond memories of the dinner, and getting to know his recipient, Norman Coulter. “I’m so glad I had the opportunity to get to know Norman. I’m very proud of what I did and glad I could help him,” Michael notes. “But he doesn’t owe me anything. I just want him to live the best life he can.”