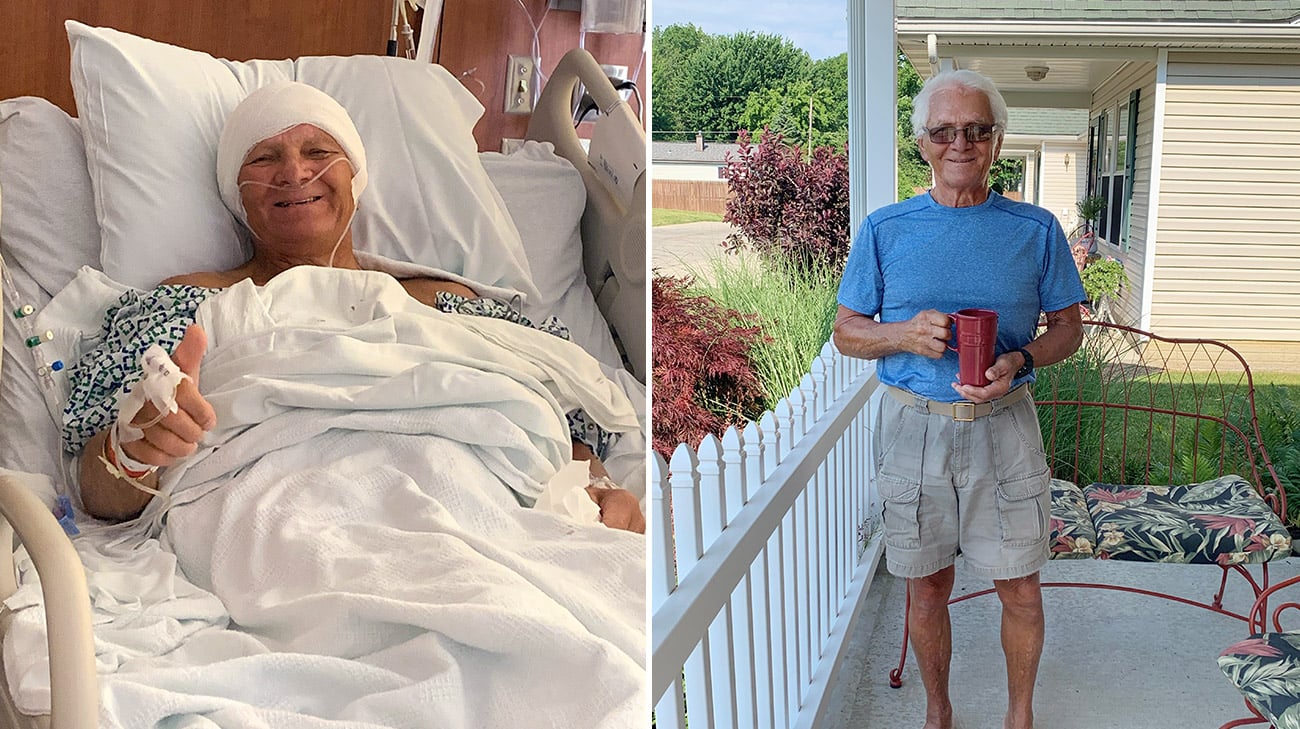 It was a hot summer day in 1960 when Carl Hanzelka walked into Sears in Ashtabula to buy a stereo. A transplant from Girard, Pennsylvania, Carl had just been honorably discharged from the U.S. Marine Corps and moved to Ashtabula for a job. Little did he know that his trip to the store would change his life.

“I went in to pick up a stereo and I ended up picking up a wife,” laughs Carl.

Carl, 85, and Carolyn, 79, have been a team since they met. Carl, a jack of all trades, worked all sorts of jobs from a chemical operator to a butcher; Carolyn was a bookkeeper for the Ashtabula County Clerk of Courts. The couple raised three children — Sandi, Cheryl and Steve — in Ashtabula. “I tell everyone that Carl is like the head on a body and I’m the neck that makes the head turn,” jokes Carolyn. “We’ve been a team the entire 60 years we’ve been married.”

An active man, Carl always enjoyed exercising and riding his bike. In 2002, he pedaled from California to Maine. Now, the Hanzelkas split their time between Ashtabula, where Steve lives, and Lakeland, Florida, where Sandi and Cheryl live. It’s a nice way to be together with their kids and grandkids throughout the year — and to escape the cold and snow during the long Ohio winter.

Everything was going well until about three years ago when Carl had recurring pain in his right cheek. He thought the issue was related to his teeth so he went to the dentist and had a few teeth abstracted. But that didn’t solve the problem.

Carl was experiencing excruciating pain with simple things — eating, talking, brushing his teeth. It even hurt when the wind blew against his cheek. “I was ready to throw in the towel. I felt like a bystander in life, not a participant,” says Carl.

One sunny Florida morning in 2017, the Hanzelkas were out to breakfast when Carl had unbearable pain in his cheek — that was the breaking point. “Carl is a very strong man who never complains, I knew his pain had to be bad,” expresses Carolyn. “He wasn’t himself at all during this time. I was so worried about him. I thought I was losing him.”

Unable to live through the pain that was disrupting his life, Carl went to see a neurologist at a Florida hospital and was diagnosed with trigeminal neuralgia — a condition caused by abnormal activity in the trigeminal nerve that is responsible for transmitting sensations of touch and pain from the face to the brain. In many patients like Carl, the pain is caused by pressure on the nerve exerted by a blood vessel near the brainstem.

After issues with prescribed medications resulting in hospital stays and his physician telling him he wasn’t a candidate for surgery due to his age, Carl felt defeated. His daughter Sandi, a nurse, and her fiancé Stuart, an orthopaedic surgeon, talked to Carl. “Stuart said ‘You have one of the best hospitals right in your backyard in Cleveland’ and suggested I get a second opinion at Cleveland Clinic,” remembers Carl.

Carl initially saw Emad Estemalik, MD, MBA, section head at Cleveland Clinic’s Headache and Facial Pain Center, and a board-certified psychiatrist, who prescribed medications. When they didn’t work, he knew another course of action was needed and referred him to a colleague.

“Carl was suffering from severe electrical jolts on the right side of his face which, at times, were debilitating. His pain was not well controlled with medications and especially given his age, he was more sensitive to side effects as well. His MRI showed very severe compression of the trigeminal nerve,” explains Varun Kshettry, MD, a neurosurgeon and surgical director of the Facial Pain Program at Cleveland Clinic.

Even though Carl’s age and previous heart issues were a factor, he was very active. Dr. Kshettry met with Carl and his family to discuss all options available. “I felt that surgery would give Carl the highest chance for long-term pain relief. The beauty of care at Cleveland Clinic is having all medical specialties in the same location. I consulted with our cardiac and anesthesia specialists and we all felt the surgery could be done safely to give him the result he was looking for,” says Dr. Kshettry. “Because we treat a large number of patients with trigeminal neuralgia at Cleveland Clinic, we have been able to treat many patients not offered surgery elsewhere due to their age.”

In August 2019, Carl had microvascular decompression surgery to relieve his pain. Dr. Kshettry performed microsurgery to separate the trigeminal nerve from the artery and inserted a Teflon sponge, to keep them from touching again.

Carl was good to go after surgery — he felt instant relief the moment he awoke from sedation and no longer needed pain medications. He's back to exercising, riding his bike and driving his car — things Carl couldn't do in the past three years due to trigeminal neuralgia.

“I’m so thankful for Dr. Kshettry. He gave me back my life and put our team back together,” says Carl. “Thanks to the personalized care at Cleveland Clinic, nothing stands in the way of my life now.”