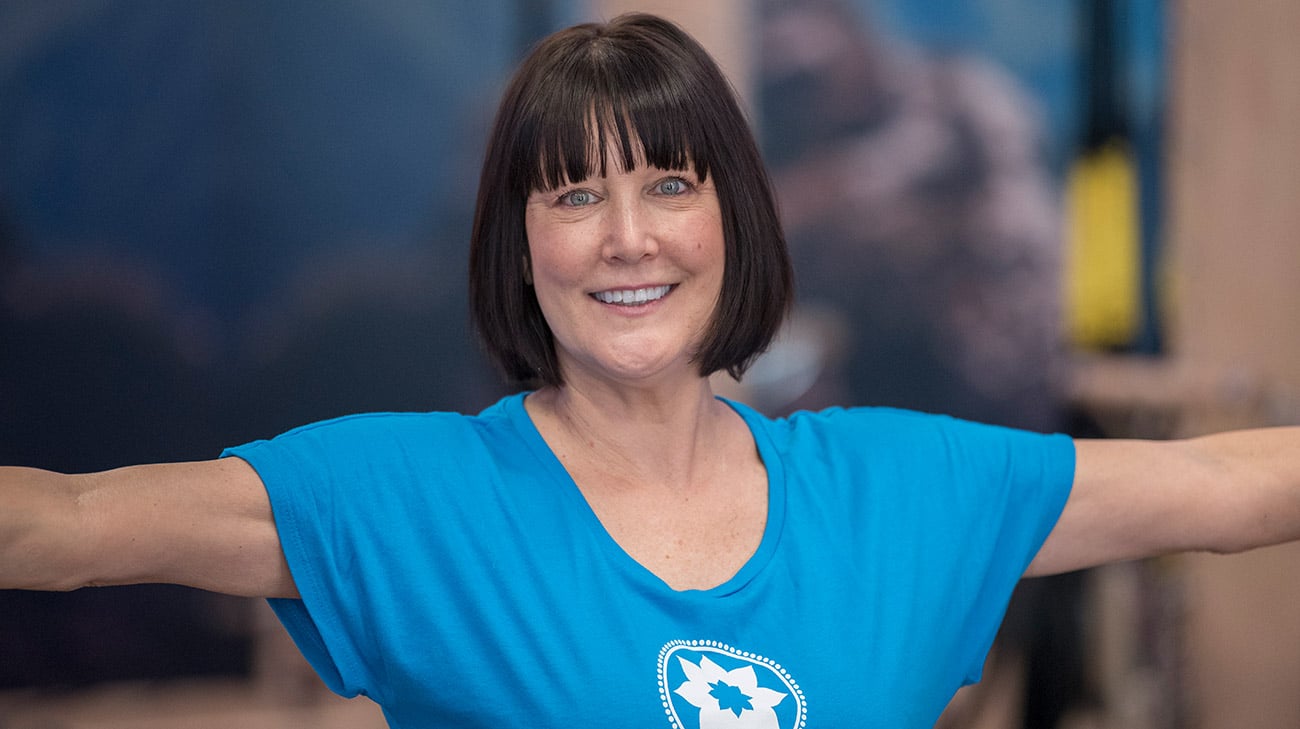 Routine visits to her eye doctor led to her using eye drops for a time. Eventually, when her right eye was no longer level with the left, she saw a doctor at Cleveland Clinic’s Cole Eye Institute.

“I had a thyroid test, because thyroid disease can cause your eyes to bulge. I also had a CAT scan. I was terrified, sure I had cancer and was going to die,” says Janet. “But then I thought about the fact that I’d been dealing with this for years, so if it were cancer, I probably would have died a long time ago.”

In 2006, Janet was diagnosed with an orbital tumor. At that time, surgical options to remove the tumor were very invasive, and would likely leave Janet permanently disfigured. Since the tumor was benign (non-cancerous), surgery was not recommended. 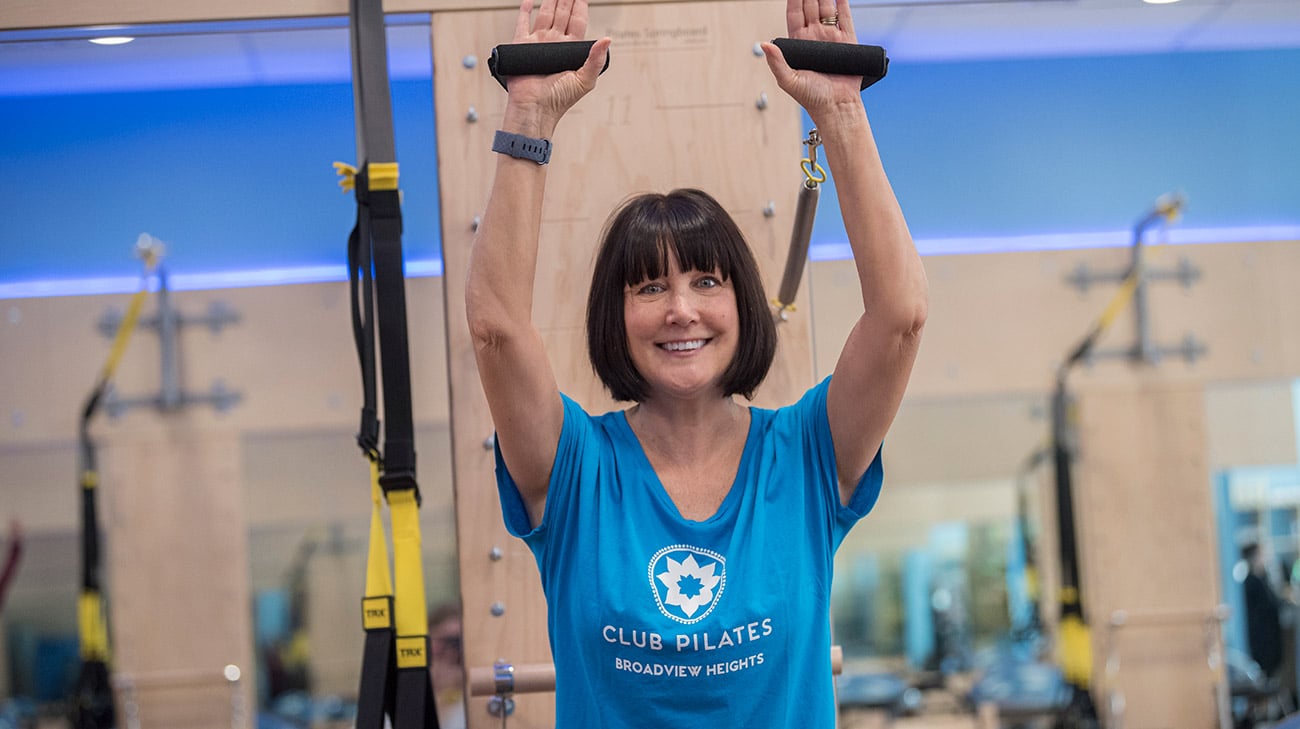 Janet suffered for years with headaches and vision problems that limited her ability to do things she loves like yoga and pilates. (Courtesy: Cleveland Clinic)

Several years later, Janet attended a medical conference dinner with her husband Charles Biscotti, MD, a Cleveland Clinic pathologist. An ophthalmologist (eye doctor) from Canada approached her and asked about her condition, inquiring as to why she had not had surgery. When she explained, he told her that there were new, less invasive options.

Upon returning to Cleveland, Janet made an appointment with Pablo Recinos, MD, a neurosurgeon in Cleveland Clinic’s Rose Ella Burkhardt Brain Tumor & Neuro-Oncology Center. Dr. Recinos specializes in skull base surgery involving tumors either within or near the brain that occur near the face or sinuses.

“Janet’s eye looked horrible. I knew I could get there pretty easily with a much less invasive approach to surgery through the eyebrow,” says Dr. Recinos. “But since that approach involved taking apart the bone that forms the roof of the eye and removing a bit of skull, she would need reconstruction surgery.”

On May 11, 2017, Janet underwent a 6 1/2 hour surgery. Dr. Recinos successfully removed the tumor, part of the bone that prevented her brain and it’s covering tissue from being in direct contact with her eye, along with her upper eyelid and surrounding tissue.

At the same time, Michael Fritz, MD, Section Head of Facial Plastic and Microvascular Surgery in Cleveland Clinic’s Head & Neck Institute, removed a portion of one of Janet’s ribs and a fascia lata free flap (a transplant of tissue and blood vessels from her thigh).

Dr. Fritz would use these to reconstruct the upper rim and roof of her eye. The fascia lata free flap had its blood supply connected under a microscope to an artery and vein accessed through a near invisible facelift type incision in front of her ear. This tissue was used to surround the transplanted rib bone, fill in the space between the eye and the brain where the tumor was removed and provide contour to the upper eyelid.

Janet doesn’t remember much about her surgery or recovery, but knows she was back home in just two days. A few days later, she saw Dr. Fritz at Cleveland Clinic Independence Family Health Center to have the surgical drains removed. 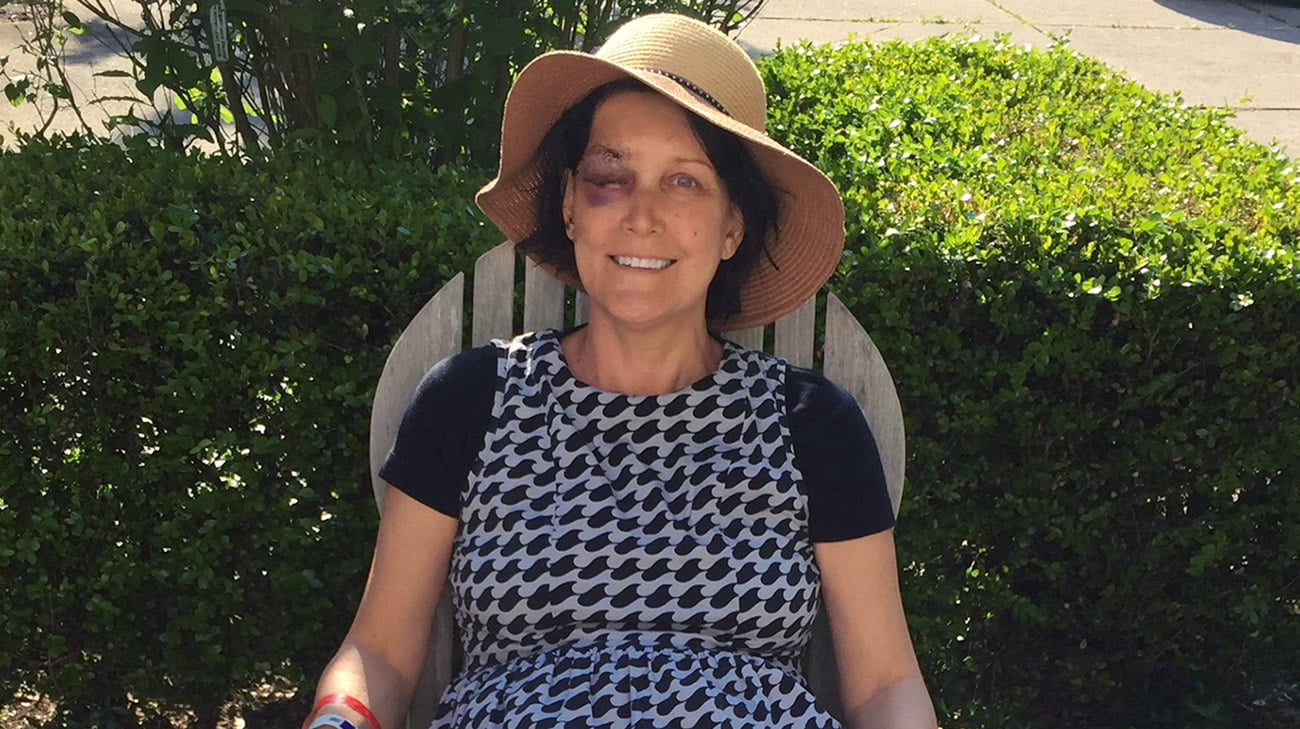 “Both doctors are total rock stars. The collaboration between them is amazing. I’d go to see Dr. Recinos, and he would have already had a conversation with Dr. Fritz,” says Janet. “They worked really well as a team.”

While Janet suffered for years with headaches and vision problems that limited her ability to do things she loves like yoga and pilates, she’s glad she waited to have surgery. “When I was first diagnosed, surgery wasn’t much of an option, and what was available was scary. Ten years later, the less invasive surgical options available allowed me to experience a quick recovery with virtually no side effects,” she says.

Janet’s headaches went away immediately. She experienced some numbness on the right side of her face, but over time that has improved. Her right eye and cheek were a bit fuller than her left, but within six months of surgery, looked just like the other.

“When I first saw Janet, she looked like a Picasso painting, with her right eye dropped well below the level of her left. One surgery — that combined removal of her tumor with reconstruction — allowed us to restore her appearance and give her back the ability to do the things she loves,” says Dr. Fritz. “The techniques used to remove and reconstruct Janet’s tumor are unique and adapted from the work we have done at Cleveland Clinic to allow us to perform complex tumor removals and reconstructions with minimal physical cost to the patients. They are definitely game-changers for patients with these types of tumors.”