Healthy Diet and Timely Treatment Save Grandfather from Diabetic Blindness 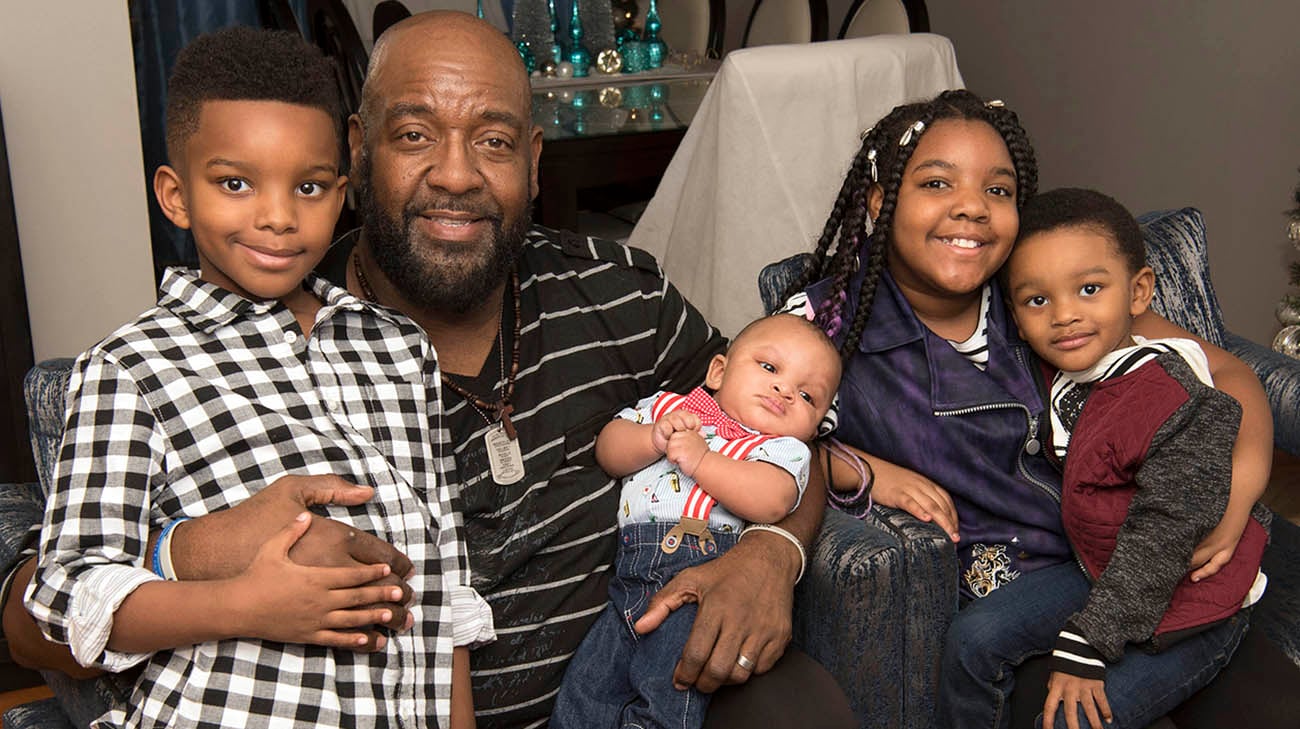 Thirty million Americans have diabetes, which can lead to a host of serious health problems –some developing with no early warning signs.

In 2000, doctors diagnosed Mark Campbell with type 2 diabetes –the more common form of the disease. It occurs when the body doesn’t properly make use of the insulin it produces.

“It’s affected my life drastically,” says Mark, now age 53 and a grandfather of five. “For years, I gave myself insulin shots, and took more than 25 pills every day. But I lost kidney function, my weight shot up and then my vision went bad. I didn’t realize, at the time, that I could have done more to make it better.” 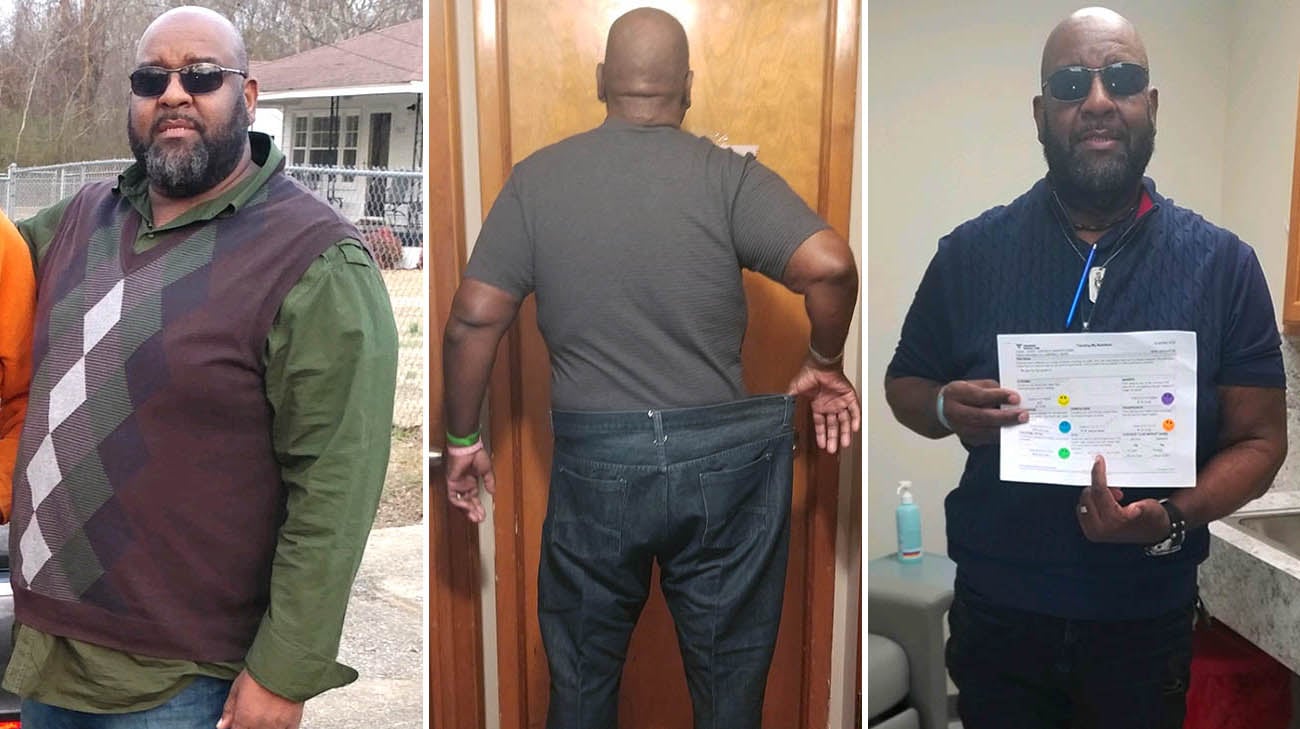 Despite years of extensive cardio workouts and weight lifting, in addition to taking prescribed medications, the former college football player was unable to stem the onset of additional diabetes-related problems for one primary reason – a poor diet.

“I felt like if I would just workout, things would get better. But as I found out, working out isn’t always the answer,” admits Mark, who at one time weighed more than 400 pounds. Now, he’s approaching his target weight of 195. “It’s what you’re putting in your mouth that can really affect your diabetes. And I didn’t make diet a priority, like I do now.”

Mark credits Rishi Singh, MD, a retina surgeon at Cleveland Clinic Cole Eye Institute, for opening his eyes – literally -- to the importance of a healthy diet. When he first visited Dr. Singh in 2017, Mark was suffering from blurry vision due to a blood vessel that burst in his left eye. 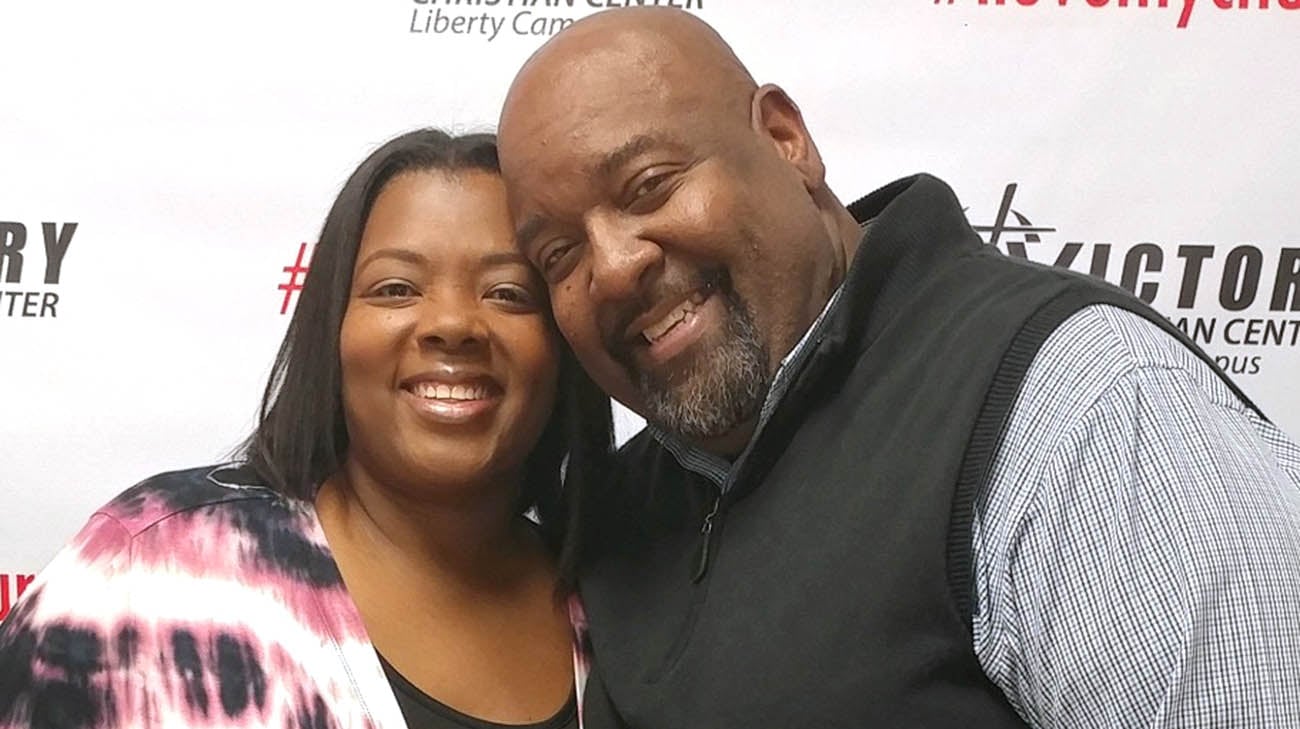 Mark, with his wife of 33 years, Denise. Together they have four kids and five grandkids. (Courtesy: Mark Campbell)

“Diabetics often assume that because they are diabetic, their vision will not be as good. And that’s simply not true,” Dr. Singh emphasizes. “By controlling your diet and other factors related to diabetes, you can prevent these conditions from occurring or from advancing at a faster rate. And even in the most severe cases, we have new treatment options like eye injections and surgeries that can make a huge difference.”

By the time he first met with Dr. Singh, however, Mark was suffering from an advanced state of diabetic retinopathy, an eye condition that affects the retinas of individuals with diabetes. It usually occurs as a result of high blood sugar (glucose) over a long period of time. Soon after Mark began treatment, which included receiving an injectable drug directly into his eye, he began losing vision in his right eye, too. 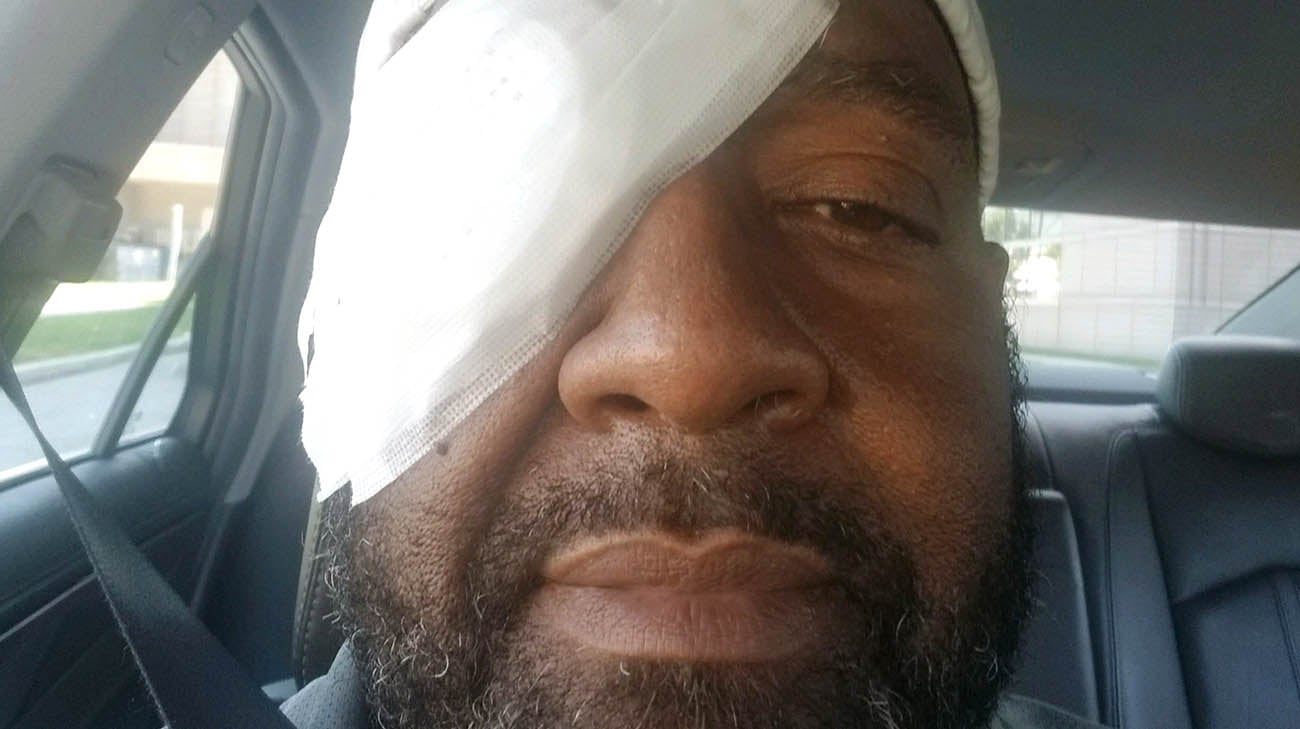 Fortunately, as a result of Dr. Singh performing laser photocoagulation treatments for leaking blood vessels in the retina, followed by retina surgery in each eye, Mark’s vision has been fully restored.

With Dr. Singh’s urging, Mark’s life has been restored in other ways, too. For the past few years, Mark has been practicing a modified, low-carb ketogenic diet. He eats meats and vegetables, consumes several nutrient-rich smoothies and drinks plenty of water each day. He abstains from bread and pasta, and eats very little cheese and eggs.

As a result, Mark says, he has more energy and feels healthier now, than at any time since playing football at West Virginia State University more than 30 years ago. 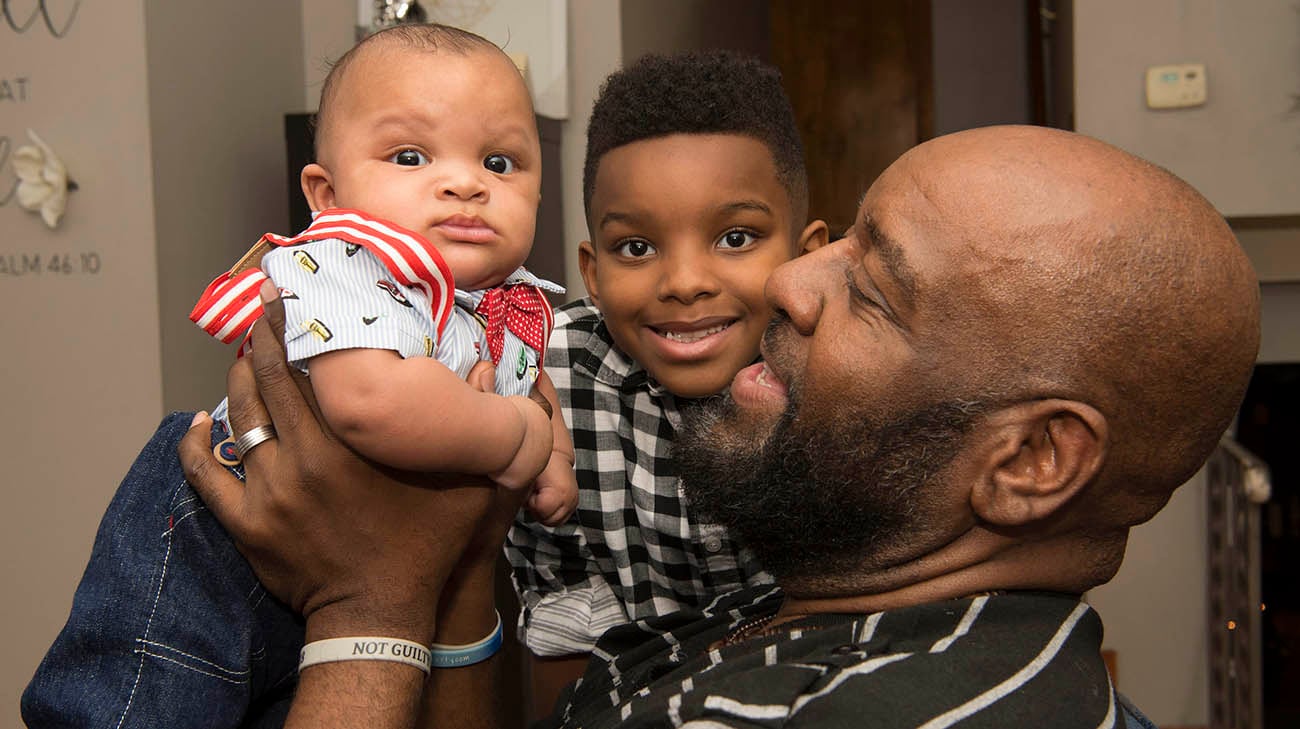 While Mark must still undergo daily hemodialysis treatment at home for a few hours each day as he awaits a kidney transplant, he has returned to work as a product supervisor for General Motors and is pursuing life with renewed vigor: “Through it all, I’m thankful for everything that happened to me. I finally have the strength and discipline to live a healthier life.”

He has advice for others dealing with type 2 diabetes, “I hope no one goes through what I went through before realizing you need to make some drastic change in your life.” 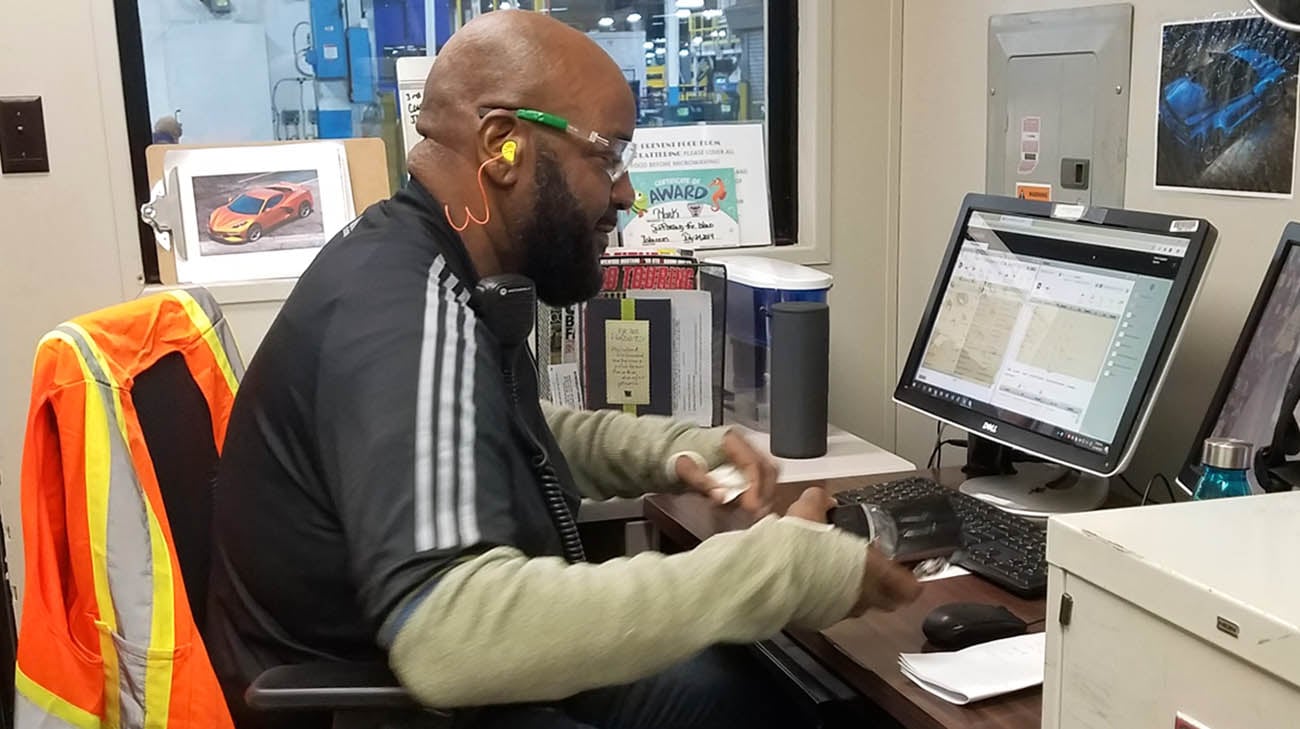 After surgery, Mark was able to return to work and establish a new routine. (Courtesy: Mark Campbell)

According to Dr. Singh, the prognosis for Mark’s vision is good, with regular exams and treatment. He feels similarly about his health overall, now that Mark has added a healthy diet to his exercise regimen and receives proper medical care.

“It’s important for every diabetic patient to get yearly eye exams. Sometimes diabetic retinopathy can be asymptomatic,” he explains. “But with diagnosis and treatment, we have several therapeutic options that can improve vision problems for almost all patients.”