College Student is Back to the Books after Palate Reconstruction 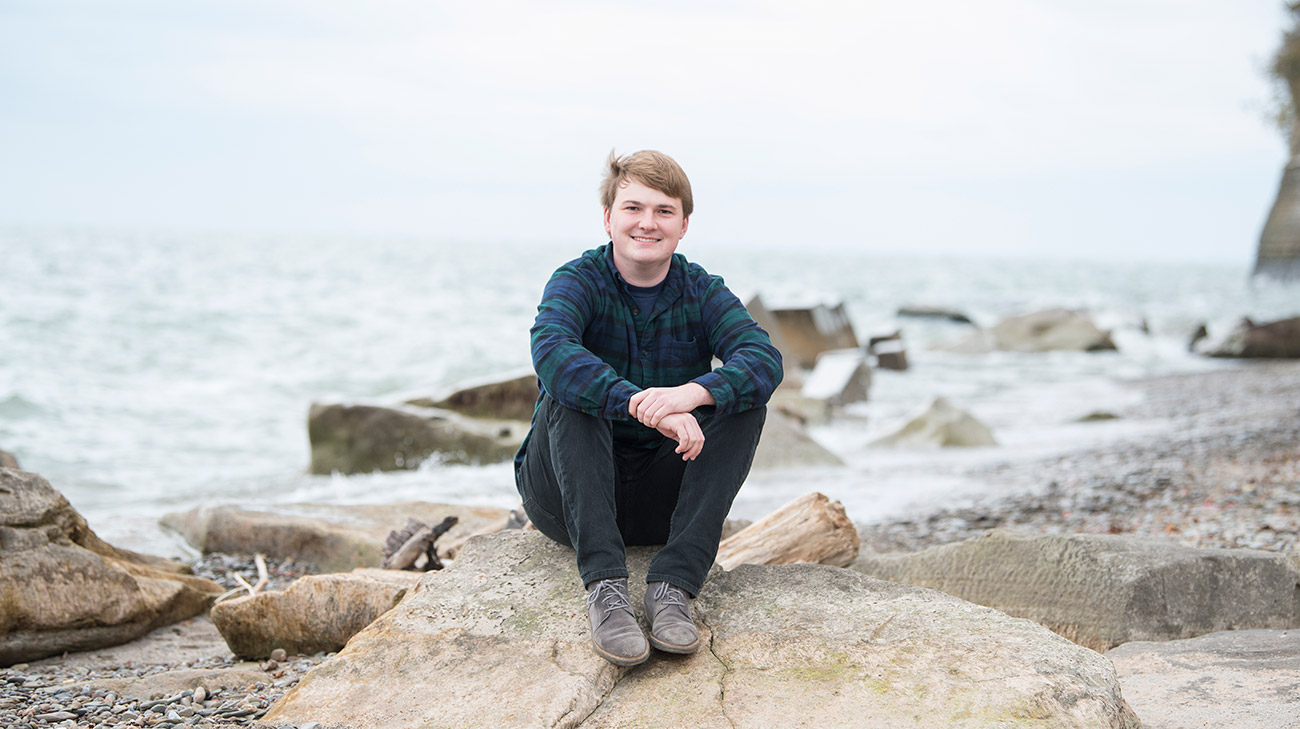 For almost half his life, beginning at the age of 13, Lansing “Mac” Baker had a lump on the roof of his mouth. Identified as a mucocele and detected by a doctor treating him for an unrelated sore throat, it was so small that Mac rarely thought about it. Surgery was mentioned as a possibility but wasn’t deemed necessary.

“The lump grew really slowly, and I adapted with it,” he says. “It never became a nuisance or caused discomfort.”

When he was 20, his doctor, Edward Fine, MD, PhD, an otolaryngologist at Cleveland Clinic Fairview Hospital, ordered a biopsy, which showed that the growth was benign. “The idea of surgery was revisited then,” Mac says. “I left knowing it was something that I would have to do, but it wasn’t at that stage yet.”

A busy student at the University of Cincinnati, Mac chose to focus on his classes. But in 2018, when he was 22, the lump’s growth suddenly accelerated. Mac started snoring at night and developed “terrible sleep apnea.” His breathing was obstructed, and his friends noticed that his voice sounded nasally.

“I began to worry — what if it turns malignant?” he says. “In the spring of 2019, I was finishing up the school semester and constantly worrying about it. I was sick of the uncertainty.” Mac decided to have surgery.

Because of the size of the lump, Dr. Fine referred him to Joseph Scharpf, MD, and Dane Genther, MD, who are members of a multidisciplinary surgical team in Cleveland Clinic’s Head & Neck Institute. On June 25, in a 10-hour surgery, Dr. Scharpf removed the tumor and Dr. Genther performed free flap palatal reconstruction.

The mass that Dr. Scharpf removed was unusually large, the size of a tennis ball. “The tumor, that originated in the salivary gland, was blocking his airway and affecting his swallowing,” Dr. Scharpf says. “With something of that size, it’s challenging to completely remove the tumor through the mouth while protecting critical blood vessels and nerves in this complex region.”

“I think whenever you have to face anything like that, there’s going to be anxiety. But throughout my entire journey, everyone there was outstanding. This is what they specialize in, and they’re so good at it. All the worries I had were wasted energy. Cleveland Clinic exceeded my expectations in every way.”

“Mac’s specific problem, a benign tumor of the soft palate — and one of that size — is pretty uncommon, especially in someone his age,” Dr. Genther says. “Because of the size, when it was removed, most of the palate was missing.”

He took tissue from Mac’s forearm to reconstruct his palate, and skin from his thigh to replace what was taken from his forearm. The tissue, removed from one part of the body to reattach in another, is called a free flap. This particular flap is called a radial forearm free flap.

“We borrow tissue from a variety of areas, depending on the defect and the size,” Dr. Genther explains. “For Mac, it was a relatively big area of the palate that we were trying to reconstruct, and it is a very thin piece of tissue there. So, we used tissue from the back of the forearm, which also is thin and has its own blood vessels. We reconstructed the palate with the forearm tissue. Then, we tunneled the vessels from that tissue into the neck, where we found blood vessels to feed that flap. We hooked up a vein and artery, so there's an inflow and an outflow to the flap.”

Microvascular surgery is done under a microscope, using a suture about the size of a hair. "It’s a slow, fine process — a pretty big surgery,” says Dr. Genther. He performs free flap reconstruction about once a week, and says that the Head & Neck Institute has five other doctors who also do this surgery.

“Our multidisciplinary team excels in part because of high patient volume,” he says. “We have better outcomes because we do these procedures on a routine basis. The more you do, the more comfortable you are, the more complex reconstructions you can perform and have good outcomes. Our post-operative recovery process also is better due to the higher volume. Our nurses, surgeons and home care are well-coordinated. At any point, we have five to 10 patients in the hospital we’re setting up to go home.”

Cleveland Clinic stands out for diagnosis and prognosis, as well, he says. “When a person notices a growth like this, I think it’s important for them to come to Cleveland Clinic to get an opinion about how it will progress over time. We see things that are considered ‘strange’ on a daily basis — things that others might see only every few years.” 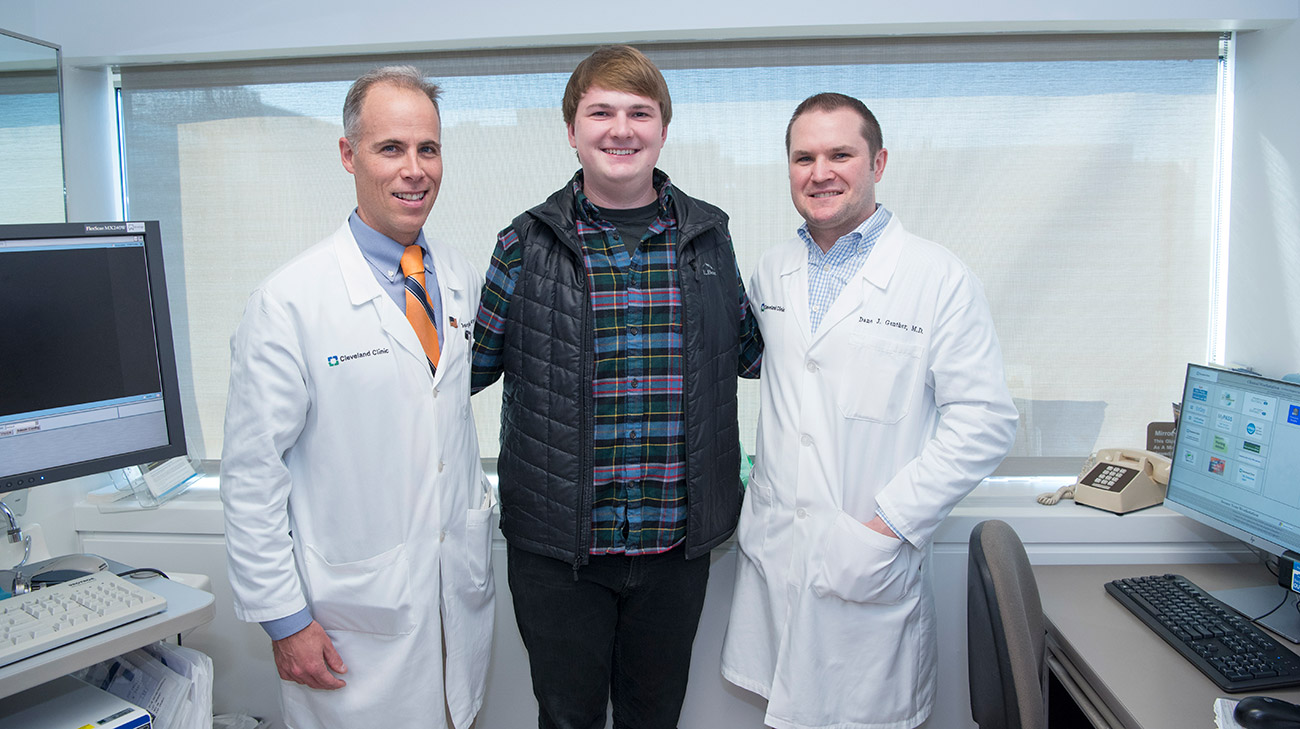 Cleveland Clinic is developing a Center for Excellence in Facial Reconstruction and Facial Nerve Disorders, he says. “Not only do we work with surgeons from other departments, but the patient’s care team also includes speech therapists, physical therapists or any other necessary healthcare providers. We have every component needed to maximize outcomes.”

Mac was in the hospital for five days after his procedure, which is normal for this type of surgery, Dr. Genther says.

“It wasn’t a painful surgery and my recovery went extremely well,” Mac says. “Immediately after surgery, I didn’t make a sound while sleeping. All the apnea was gone, there was no snoring, and I got a full night’s sleep. During my second night in the hospital, my mom kept poking me because she wasn’t used to my sleeping quietly! I had to relearn how to swallow, and my speech was a little off, but mostly fine. My voice changed — there was a crazy difference between before, when it was nasally, and after.

“I didn’t need to go home with a feeding tube because I could swallow, but I was placed on a liquid diet for two weeks, which was tough because I’m a huge fan of pizza! I ate a lot of ice cream, smoothies and protein shakes, which was nice, and then moved on to soft foods. A month later, I was OK’d to go back to normal food. I had to be careful about sharpness, but temperature was not a problem.”

Four months post-surgery, Mac says, “I couldn’t be better! Looking back on it, this was quite the summer. Now, I’m better than normal — I sleep fine, my voice has improved, and I don’t have any ailments. I have no complaints.”

Mac says that anyone considering this type of surgery at Cleveland Clinic should be reassured. “Everyone at Cleveland Clinic is there to help you along the journey. I think whenever you have to face anything like that, there’s going to be anxiety. But throughout my entire journey, everyone there — nurses, anesthetists, surgeons, lab techs — was outstanding. This is what they specialize in, and they’re so good at it. All the worries I had were wasted energy. Cleveland Clinic exceeded my expectations in every way.”