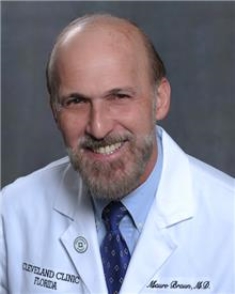 Mauro Braun, MD, is  a staff member of the Department of Nephrology / Hypertension at Cleveland Clinic Florida, where he serves as Program Director of the Nephrology Fellowship Program. His specialty interests include dialysis (acute and chronic), renal replacement therapies, lupus nephritis and glomerular diseases. He is certified by the American Board of Internal Medicine, with a subspecialty in nephrology.

Dr. Braun was also excellent in every aspect of his care fir thus visit.

Dr Braun is an excellent doctor, keeps one abreast of every decision made.

Dr Braun spent decent time explaining what needs to be done and after effects if the instructions are not followed. He is the best physicians I had seen for my condition.

The Doctor is very busy as are most at the Cleveland Clinic. Getting a 'visual Appointment' with Dr. Braun at the time desired can be difficult. This particular appointment was for late in the day since it was the only time available. The Doctor was running behind. Needless to say, we waited a while but once connected --all went well. I have been seeing Dr. Braun for 17 years since my Kidney Transplant there at the CC.

I consider Dr Braun to be OUTSTANDING in the Professional care he provides me. Thanks.

Dr Braun was very tentative to my concerns and spend time to listen to me.

Dr. Braun is the best anyone could have asked for. Great Doctor!

All my experiences have been great with the doctor. From the very first and on.

Dr. Braun is an excellent physician, who exhibits compassionate and concerned care for his patients.

My visit was great, just that he is such a good doctor I have to plan for at least 2 months out for a visit. But he is worth the wait!!

Dr. Braun always listens and does his best to help me. He pays attention and is caring and I feel very confident in his interest in me and my condition. A true professional.

Care Provider is one I would gladly recommend to anyone. He has one in the loop of every decision being made. Marvelous Doctor!

Dr Braun is an excellent physician

Dr Braun was very good and his recommendations made sense.

I had great appointment with the doctor Braun.

I have always had a great experience with Dr Braun. That has never changed.

My care provider is always awesome.

Dr Broun is a care person and gentle

Very pleased with the care rendered by Dr. Braun

I have been seeing Dr Braun for over 12 years, he has always been professional and helpful.