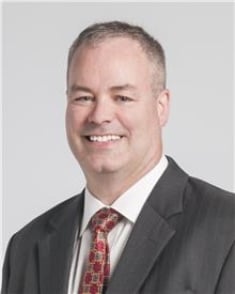 Sean Lyden, MD, is the Chairman of the Department of Vascular Surgery at Cleveland Clinic’s Sydell and Arnold Miller Family Heart, Vascular & Thoracic Institute.   He serves as chief medical officer of Excelerate Strategic Health Sourcing, a venture between Cleveland Clinic and Vizient to save health care organizations money with a provider-led, physician-engaged sourcing.

Success Rates: Cleveland Clinic’s Vascular Surgeons are national and international leaders in treating patients with even the most complicated cases, using the most advanced techniques. Much of our experience is in re-operative surgery for patients whose original operations were performed elsewhere, and the department serves as a major referral center for these and other difficult cases throughout Ohio and the surrounding states. We have one of the largest post-graduate training programs in vascular surgery in the United States, and our academic work has been published in scientific journals throughout the world. Success rates for specific procedures are available at http://my.clevelandclinic.org/heart/about-heart-vascular-institute/treatment-outcomes.aspx

Dr. Lyden was appointed to the Cleveland Clinic staff in 2001. He is Professor of Surgery in the Division of Vascular Surgery at Cleveland Clinic Lerner College of Medicine of Case Western Reserve University.

About Dr. Lyden: “I enjoy my specialty because I end up taking care of a patient for the rest of their lives and I establish close relationships with them and consider them lifetime friends.”

Consulting and/or Speaking. Dr. Lyden receives fees of $5,000 or more per year as a paid consultant, speaker or member of an advisory committee for the following companies:

You should be very proud of him and his treatment. I respect him very much.

I can not thank Dr. Lyden enough for the gift of his care and surgical expertise. In 2019, a rare vascular condition resulted in ischemia of my lower leg. I am certain that I have my leg today because of his dedication and skill. Dr. Lyden (and Dr. Hardy who assisted him) deeply affected my life and surgical outcome. I am now a medical student and hope to one day impact others and the medical profession in a similar manner. He is an inspiration.

I had a great experience at the Cleveland Clinic. Dr Lyden is both professional and personable. He interpreted my MRI more thoroughly than other surgeons and determined that I didn't need surgery at this time. Dr Lyden is a treasure to humanity, the Cleveland Clinic is a treasure to humanity. They care for you and about you and they have a stellar reputation for this reason. Great people great place. Five stars.

I had no one on one time with Dr. Lyden. The room was full of students and I got no time to ask any questions, he was monitoring the student on computer most of the time. My exam was extremely limited.

We have been seeing Dr. Lyden for at least 15 years. He is knowledgeable and professional. We would not have the faith or trust in another doctor as we do Dr. Lyden.

Dr. Lyden was very knowledgeable and took his time talking with me. I can hardly wait for him to read over the Disk I sent so he can diagnose why my right leg behind my knee has been hurting me for over a year.

Dr. And his Staff Excellent

I cannot say enough wonderful things about Dr Lyden. He's exceptional. He always makes me feel so at ease. Very professional & knowledgeable. I would not see anyone but him for my care. I feel I was personally blessed when I was referred to him in 2019 and will drive the 7 hrs for follow up yearly without any complaints.

Excellent facility. Would go no where else for my care. I feel so safe under Dr Lydens care.

Can't brag enough of how knowledgeable Dr. Lyden was, when he came in to see me he told me my medical history. He came in the room while do testing and was available for me after my testing. Very impressed by his knowledge!

Dr Lydon is the best, that's why I continue to come there. Best treatment in world #1.

Dr Lyden is dept chair and has a hectic schedule. He is an outstanding physician

*Dr. Lyden saw me Monday September 26th and scheduled my surgery that Friday Sept. 30th. He was very concerned about my right carotid artery and took care of the problem!

*Dr. Lyden's beside manner is top notch. His staff are all attentive and explain things very well.

Great experience!!!! Dr. Lyden was extremely friendly and took his time with me.

Dr. Lyden was a great guy!!

I wanted a lot more information about the nature of my situation, prognosis, and options going forward; the doctor seemed rushed and unwilling to give me the time and information that I needed. I disagree with his final assessment.

I feel like I am getting the best care possible from Dr. Lyden. He listens to my concerns, gives me very transparent responses and makes me feel confident in next steps and what to expect in the future. I drive 4 hours to see him and have zero regrets.

Dr. Lyden is an excellent communicator; he even uses a white board to illustrate a point. I find that very instructive.

Dr. Leyden is a fabulous doctor. I feel lucky to have him.

Dr Lyden is clearly the best

Dr Leyden was very compassionate and sympathetic toward my diagnosis and anxiety. No one looks forward to having surgery and he convinced me not to worry until we get the results back from my second ultrasound.Everything went smoothly-because of a great department leader.From what I could see it's a well organized and efficient department.Being a health care professional I was really impressed.

Dr. Lyden is OUTSTANDING!!! He is one of the BEST in his profession and has the greatest bedside manner I have encountered. I would recommen.d him to all my friends and family.

Dr Lyden was great and very clear with treatment plan! I especially like that about him.

Dr. Lyden is a superb, caring physician and a delightful human being!

I am grateful that I chose Dr. Lyden I felt and feel I'm in very good hands

Dr Lyden and staff are wonderful and will recommend to anyone.

I would highly recommend Dr. Lyden!