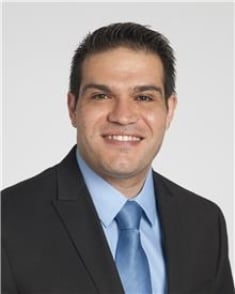 You can view detailed information about the number of patients and outcomes for patients treated by specialists in the Section of Cardiac Electrophysiology and Pacing at http://my.clevelandclinic.org/heart/about-heart-vascular-institute/treatment-outcomes.aspx.

Education and Training: Dr. Hussein earned his medical degree with honors from Lebanese University Medical School, Beirut, Lebanon. He distinguished himself on admission by ranking first on the admission examination followed by six years as a Hariri Foundation scholarship recipient. He served an internship and residency at Cleveland Clinic, where he won the 2010 Department of Medicine Research Award and the 2011 William Lower Clinical Research Award. Dr. Hussein served a fellowship in cardiovascular medicine at the University of Maryland, Baltimore, MD, where he was recipient of the Nathan Carliner scholarship award for excellence in cardiovascular research. He subsequently completed his subspecialty training with a two-year fellowship in cardiac electrophysiology at Cleveland Clinic. In his final fellowship year he was Chief Fellow in Cardiac Electrophysiology. He was named to the Cleveland Clinic staff in 2016 upon completion of his fellowship.

Research, Publications and Speaking: Dr. Hussein is principal investigator or co-principal investigator on more than a dozen research studies in electrophysiology, in particular on treatment of atrial fibrillation. Widely published in the field, Dr Hussein’s work has been featured in highly respected, peer-reviewed medical journals in his subspecialty, such as the Journal of the American College of Cardiology, Circulation and Heart Rhythm. Dr. Hussein also is a frequent invited speaker at prestigious national medical meetings, including the Heart Rhythm Society annual meeting and American Heart Association Scientific Sessions.

About Dr. Hussein: “My ability as a heart rhythm specialist to intervene and improve patients’ quality of life is what makes this field truly engaging on both a personal and professional level. I am committed to providing excellent patient care and giving every patient my very best efforts.”

Dr. Hussein and his wife are the parents of two young children. In his leisure time he enjoys painting, chess, classical music and soccer.

Top Notch, the Doctor was very informative. Answered all my questions. I felt better about the procedure once I met with him.

I did recommend Dr Hussein to my niece

Dr. Hussein is one of the kindest individuals I have ever encountered. And. He's smart.

Dr. Hussein is knowledgeable, professional, helpful, & friendly. I would highly recommend him to anyone.

Dr Hussein listened to my concerns and answered thoughtfully.

Very direct and somewhat forceful in his recommendations. I took him very concerned.

Dr. Hussein was warm and personable. I felt heard and I experienced him as knowledgeable and thoughful.

Dr Hussein is awesome! I do feel like he truly cares about his patience and he definitely listens and tries to come up with a solution that truly works.

Had a great and thorough appt. I did not feel rushed in any way, had time to voice all my concerns, and have a good understanding of my next steps. The doctor was patient and sincere

Dr. Hussein is a very caring physician who listens to every concern and provides professional, knowledgeable answers to all questions.

I loved the Dr and the whole experience

Dr. Hussein always exceeds my expectations once I am able to get through the bureaucracy of the Clinic to set up a discussion.

Dr. Hussein is an excellent physician. He sure care about his patients.

We Love Dr. Hussein and his staff! He has always been very attentive and courteous.

I would recommend this provider very highly

Dr Hussein has to book several months ahead.

Dr. Hussein was wonderful. He knew my history, obviously had studied my file and gave me hope that my complex problems could be solved. I feel very fortunate to have him as my physician!

Dr. A. Hussein is wonderful!

After dealing with AFib for 6 years in Buffalo, our decision to go to Cleveland clinic was the best. 3 visits with dr Hussein and no more AFib

*Dr. Hussein is very caring & a great surgeon. He helped get my life back.

Dr Hussein is the best!

Because of some other problems I was experiencing, Dr. Hussein had to change his schedule to see me. I appreciated all his help and consideration.

*Dr. Hussein is an excellent doctor. He is very knowledgeable. He visited me every day & explained everything.

I came to Dr. Hussein 5 years ago for ICD removal. I'm now coming 6 hours for an SICD implant. He's very respectful and agrees with my concerns.

Excellent! I appreciated being able to talk to my doctor without having to make an 11 hour trip.

Dr. Hussein is an extraordinary physician. He is a huge asset to Cleveland Clinic.

By visit with Dr Hussien was more informative this time than last and I felt more comfortable with him as my doctor. My original doctor that preformed my procedure had decided to leave the clinic, so I was not familiar with Dr Hussien.

Dr Hussein listened to me and explained my condition.

Again the ecosystem of the clinic is extraordinary and was the deciding factor in why I am choosing Dr. Hussein has my EP

Dr. Hussein is very personable and easy to talk to. He doesn't rush through the appointment and is thorough covering my questions when answering them.

I required a last minute appointment in order to obtain medical clearance for a position I have at the U.S. Consulate General in Erbil, Iraq. I was able to get an appointment in less than a week. The care provided by Dr. Hussein and his staff was exceptional.

I fully trust in the doctor's concern/care of my condition and his willingness to listen to my ideas. He is such a kind and generous doctor in the care of his treatments.

Dr. Hussein is an excellent doctor and a fine person!

I came to the Clinic for a fresh review of my heart issues and to have a visit with Dr. Ayman Hussein. Best thing I've ever done for my health.

Dr Hussein is one of the best doctors I've encountered during my battle with heart disease. He is straight to the point yet compassionate and that makes a world of difference when you are so afraid and unsure about life and your future. I just love him!

Every experience I've had with Cleveland Clinic and staff are top notch. Doctor Hussein and his staff really care! I'm thankful for them!