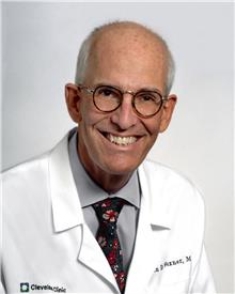 Steven D. Wexner, M.D., PhD(Hon), FACS, FRCS(Eng), FRCS(Ed), FRCSI(Hon), Hon FRCS(Glasg) is Director of the Digestive Disease Institute at Cleveland Clinic Florida and Chairman of the Department of Colorectal Surgery. He previously served as Chief Academic Officer (2007-2012), Chief of Staff (1997-2007), and Chairman of the Division of Research and Education (1996-2007) at Cleveland Clinic Florida.

Further, Dr. Wexner's work has resulted in the establishment of the double-stapling technique as the gold standard in J-Pouches, which prevent the patient from needing a permanent ileostomy. He has been instrumental in the adoption of the ileal J-Pouch for patients with ulcerative colitis or familial adenomatous polyposis, and the colonic J-Pouch for patients with rectal cancer.

More recently, Dr. Wexner spearheaded the establishment of the American College of Surgeons Commission on Cancer National Accreditation Program for Rectal Cancer (NAPRC), which began accepting applications in June 2017. The NAPRC is the culmination of a seven year campaign, led by Dr. Wexner, to standardize and globalize the practice of colorectal surgery through international collaboration and advocacy. This approach began in 1988, long before global collaboration between physicians and researchers became common.

Dr. Wexner has published over 780 manuscripts, over 266 textbook chapters and  over 130 editorial and invited commentaries. He is the editor or co-editor of 33 textbooks or freestanding volumes to date and is a member of 34 editorial boards and a reviewer for an additional 31 journals. He is an active member of 41 learned societies and has held more than 35 appointed or elected offices in these societies. He is an honorary member of the surgical societies of ten other countries, has conducted 71 visiting professorships and delivered over 2,100 scientific lectures.

Dr. Wexner has received 11 national, international and regional awards for his research. Each year, he trains 15 to 20 surgeons in laparoscopic colorectal surgery, surgical oncology and the surgical management of inflammatory bowel disease. As Symposium Director of the Annual International Colorectal Disease Symposium, he has been the host educator to thousands of surgeons from around the world.

Consulting and/or Speaking. Dr. Wexner receives fees of $5,000 or more per year as a paid consultant, speaker or member of an advisory committee for the following companies:

Royalty Payments. Dr. Wexner receives or has the right to receive royalty payments for inventions or discoveries commercialized through the companies shown below:

Right to Future Distribution of Cleveland Clinic Financial Interest. Dr. Wexner may receive future financial benefits from the Cleveland Clinic for inventions or discoveries commercialized through the companies shown below:

Equity Dr. Wexner owns stock or stock options in the following companies for activities as a founder, inventor, discover, developer:

Dr. Steven Wexner, is a one of a kind in his field of colorectal surgery. He had saved my life many years ago with a successful redo and reconstruction of a J pouch. We are blessed to have a doctor who shares and teaches his great work to ultimately save others like myself.God bless Dr. Wexner and his teamDonna DiPietro

We were so impressed with all aspects of our visit on Jan 5th. Pete feels very confident of the upcoming surgery and Dr. Wexner's knowledge and experIence. He has hope again that he might experience a normal life. We are so grateful for Cleveland Clinic and Dr. Wexner.

Dr. Steven Wexner is an amazing doctor. All questions were answered and I am very confident with my upcoming surgery. All of my pre-operative appointments were made by Dr. Wexners staff all amazing. I am confident I am in good hands. Thank you

Dr. S Wexner and all of his staff are amazing

Special thanks to *Dr. Wexner and staff for my care.

The team of doctors was great!

This is not my first occasion dealing with Dr. Wexner and his staff. They have always shown consistent care, patience, compassion and knowledge of of my ailments, and conditions. I consider myself very lucky to haven the Dr., and his staff to care and look after my well being.

I've noticed through this and past experiences with Dr. Wexner, his team has expressed surprise that I was able to see the Dr. I know Dr. Wexner has very exclusive clients and patients and I am lucky to be able to have his care. This is surprising to much of his staff. But none-the-less, they have always provided me with the best of their abilities.

I was quite impressed at how quickly we were able to get a consult with Dr. Wexner.

What amazed me the most is that I've been to 2 other doctors and neither of them recommended these investigative tests that Dr. Wexner ordered. It seemed like they were just okay with giving me a script and sending me on my miserable way. I am hopeful that Dr. Wexner's expertise in this area will help find the source of my problem and get me back to my old self again some day.

Dr. Wexner and his team were amazing. I felt safe and was not alarmed.

All of the care providers that I have seen have been very caring and professional!

It was a very good experience. I'm very excited to have Dr. Wexner and his team working on my case.