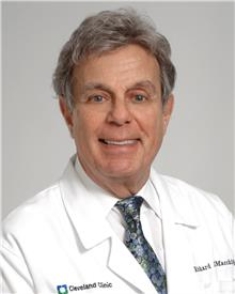 Richard J. Macchia, MD FACS - In June, 2009, Dr. Macchia was appointed to the staff of the Glickman Urological and Kidney Institute at Cleveland Clinic Florida (CCFL). In May, 2011 he was appointed Affiliate Professor of Clinical Biomedical Science on the faculty of the Florida Atlantic University Charles E. Schmidt College of Medicine. He has been listed more than 60 times in various “best doctor” publications in New York, Florida, and nationally. In May, 2013 at its annual meeting the American Urological Association presented him with one of its highest awards, the Distinguished Contribution Award, for his career long efforts on behalf of the education of students and urology residents. In its August 2013 issue the Canadian Journal of Urology featured an article about him as part of its "Legends in Urology" series. Dr. Macchia served as Captain, US Army Medical Corps Reserve during the Vietnam war era. He received an honorable discharge and is a member of the American Legion.

Dr. Macchia joined the faculty of SUNY Downstate Medical School in 1974. In 1982, Dr. Macchia he was appointed Professor, Chairman, and ACGME Program Director of the Department of Urology.  He served in those capacities until 2010. During that period he was also Chief of Urology at University Hospital Brooklyn and Kings County Hospital Center . The Chancellor of State University of New York appointed him to the rank of Distinguished Teaching Professor in 1997. In December 2003, he was appointed Consultant, Department of Urology, Memorial Sloan-Kettering Cancer Center (MSKCC).

Following his graduation from New York Medical College in 1969, he underwent general surgical training at St. Vincent’s Hospital Center in New York City . From 1971-74 he completed his urology residency under Dr. Keith Waterhouse at SUNY Downstate and then joined the faculty. He was subsequently awarded the F.C. Valentine Fellowship of the New York Academy of Medicine. That fellowship was served under Dr. Willet F. Whitmore, Jr. at the Memorial Sloan-Kettering Cancer Center (MSKCC) in New York City during 1975-76. He then re-joined the SUNY Downstate faculty.

Dr. Macchia served as the chairperson of the Section on Urology of the New York Academy of Medicine and a member of its Advisory Council for 6 years. He also served for 6 years on the selection committee for the NYAM FC Valentine award for career achievement in urology and chaired the committee for 1 year. He is a past chairman of the Academy’s Edwin Beer Fund Committee. He was President of the New York Section of the American Urological Association in 1995-1996 and the Brooklyn-Queens-Long Island Urology Society. His memberships include the Society for Urologic Oncology, the Society of University Urologists, the American Society of Clinical Oncology and many others. Dr. Macchia is a former associate editor of Urology, currently manuscript reviewer for 6 major urology journals, a former member and team leader of the AUA Program Abstract Review Committee, and was a frequent moderator at scientific sessions for the annual meeting of the AUA. He has been a study section member for the California Cancer Research Program and the NIH. He was a founding member of the Board of Directors of the Society of Urology Chairpersons and Program Directors and the first to represent the NY Section - AUA.

He and his colleagues were awarded second prize for research at the annual meeting of the AUA in 1980 and 1982 for their early NIH funded work on the relationship of androgen receptors and prostate cancer. An early proponent of alternatives to radical cystectomy, he was guest editor of a special issue of Urology (Vol. 31, 1988) devoted to this subject. He and colleagues were among the first to publish a report on the increasingly important issue of post prostate biopsy fluoroquinolone resistant urinary tract infections. He has been a member of the Radiation Therapy Oncology Group and was a member of the Southwest Oncology Group (SWOG). He has a special interest in urologic legal and ethical issues. A number of years ago the AUA initiated a Code of Ethics which, in part because of his long time efforts, includes a section on academic integrity.

Dr. Macchia has lectured at numerous academic institutions and meetings in the US , Europe and Japan . He has also co-authored over 120 scientific articles and abstracts including 26 textbook chapters and proceedings. He is consulting editor of "The 5 Minute Urology Consult" series. He has also been co-investigator on many collaborative projects and held an NCI grant as site principal investigator for the SELECT clinical trial. That trial enrolled the 4th largest number of African-American men into the trial out of 425 institutions in North America. He has served on the external advisory boards of several internationally renowned institutions.

New York Magazine listed him as one of “The Best Doctors in New York City ” in its inaugural listing in 1991. He is also routinely listed in Castle-Connolly’s “Best Doctors in America ”, the “Guide to America ’s Top Urologists” by the Consumer’s Research Council of America and “New York Super Doctors”. In 1994, he was named an honorary alumnus of SUNY Downstate Medical School , received the New York Medical College Alumni Association Medal of Honor, the "Gender Equity Award" from the SUNY Downstate chapter of the American Medical Women's Association, and the SUNY Downstate University Hospital Community Advisory Board Service Award. He is a lifetime member of the SUNY Downstate COM Alumni Association. In 1995, he was elected as a faculty member of the AOA medical honor society. In 1997, he received a recognition award from the Daniel Hale Williams Society, an organization of Afro-American and Latino medical students. In 1998, the NY Section - AUA awarded him the Russell Lavengood Service Award. In that same year, he accompanied his friend,  Dr. Robert Furchgott, to Stockholm when Dr. Furchgott received the Nobel Prize. In 1998, he was designated Master Teacher in Urology by the SUNY Downstate COM Alumni Association. In May, 2003 the Arthur Ashe Institute for Urban Health presented him with its Leadership in Urban Medicine Award. In June, 2005 Dr. Macchia was presented with the very first SUNY Downstate College of Nursing Excellence in Clinical Teaching Award. In 2005, Maimonides Medical Center named him the 19th annual Immergut Lecturer. He was named as the physician honoree at the celebration of the 175th anniversary of the founding of Kings County Hospital Center in 2006. In 2007, he became the first ever president of the Robert F. Furchgott Society. In March 2007 he received the first ever Golden Apple Teaching Award from the SUNY Downstate Medical School chapter of the AOA honor society. In 2008 he was named President of the MSKCC Whitmore Alumni Society, the first person to hold that title. In May, 2011 Dr. Macchia received the Clark-Curran Award in Medical Administration from the SUNY Downstate COM Alumni Association.  He established the Richard J Macchia MD scholarship fund in SUNY Downstate to assist high achieving medical students in financial need.   In 2012 and 2015, the NY Section - AUA nominated him for the AUA's Edward Flanigan Education award.  In 2013, UROLOGY presented him with its Excellence in Reviewing award.

Dr Machia is the best of the best

This Doctor is very nice and respectful. Listens and discusses problems very clearly.

The Doctor give excellent attention to the patients. The staff is courteous and progfessional

Dr. Macchia was very friendly and very direct in responding to my situation.

Dr. Maccia's experience is notable, it is a pleasure to have him as my Doctor.

Part of the visit involved a prostate examination. I actually told the doctor that I really enjoyed the visit! He was very detailed, very courteous, thoughtful of my concerns and far exceeded my expectations for such a visit. I know, this review is rare. But, it's true.

The concern for expenses for medication and options was highlighted by the doctor. I really appreciate it that

Dr Maccia is the most supoerbe Dr I have ever seen. Very knowledgeable & very brilante

Doc was terrific he's the best

Dr Maccia listened to my concerns and took the time to explain causes and plan of action going forward.

Dr. Maccia is a brilliant doctor, he not only answered our questions, he was kind and thoughtful and resourceful as well as professional.

Dr Macchia is very knowledgeable and a true professional

Dr. Machia is a true professional. I am very happy to be his patient.

Dr Machia is a very knowledgeable professional doctor.. He is very caring and listens to what your problems may be and gives the patient a plan of action.. I think he is wonderful.

I can not rate any of these questions above poor based on the manner in which Dr. Macchia treated me.

Dr Macchia is very knowledgeable & experienced in this field.

Dr. Macchia is outstanding! Really impressed with him. He is now my urologist. Period.

Dr Macchia is one of the best urologist I've ever seen.

Dr Machia was outstanding. A great physician, one who showed vocation, instead of profession. Very human and thorough, I felt in good hands throughout the visit.

Dr Richard Maccihia absolutely incredible. I have been to many doctors in my 83 years and he ranks 1 or 2. He was amazing on the time he spend with me, He was patient in getting my background.He explained everything clearly. I am completely confident with Dr MACCHIA. He is a great Doctor.

Dr. Macchia was very thorough and explained all options.

Dr Macchia is an outstanding specialist with a warm manner. He does not rush his patients and listens and explains issues well. Highly recommend him.

The Doctor was very competent. He asked pertinent questions and controlled the order In which they were asked and answered by me. Excellent was of conducting the process.