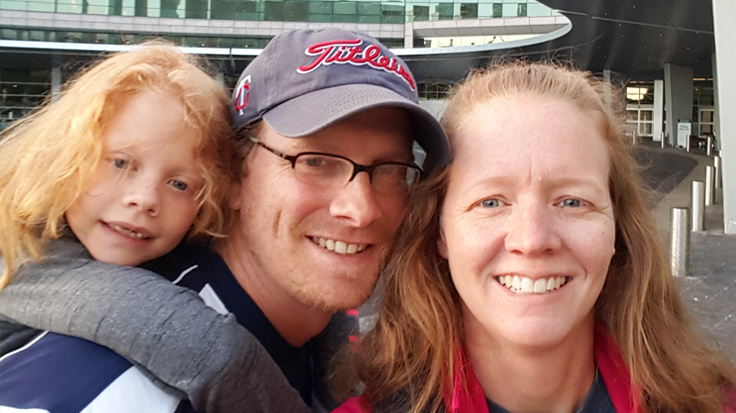 In January of 2015, first grader Cailee Jo Pauling was playing with her siblings at home in Lakefield, Minnesota. Suddenly, as she got stuck under the couch-she called for her mother’s help. What Cailee and her mother Katrina quickly discovered was that she was not simply just “stuck” but physically could no longer move her right arm and right leg.

Immediately Cailee was rushed to the ER. The doctors believed she was having post seizure effects. From there she was transferred to Sioux Falls Children’s Hospital. They started treating Cailee for seizures and paralysis, and an EEG was done that showed slowing over the left side of her brain. She subsequently underwent an MRI showing Cailee had a very significant sized bleed in her brain. The cause of the brain bleed was unknown.

As the waiting process continued another test was conducted. A cerebral angiogram was performed, which did not give a diagnosis of the bleed. The doctors stated their best guess was that she had a brain Arteriovenous Malformation (AVM) that had been destroyed at some point. Brain AVMs are errors in blood vessel development in which tangles of arteries and veins connect abnormally. They are a leading cause of hemorrhagic strokes in children and adolescents.

Cailee’s injury took a significant toll on her health and well-being. As time passed she become weak and was still unable to move her right arm or leg, and could no longer speak. To start rebuilding back Cailee’s strength, she began rehab. As rehab came to an end she left being able to walk with a brace, and could speak to make her needs known, but it was still difficult to interpret her words.

Soon after leaving rehab she returned to a semi-normal routine where she could return to school for half day, and went to outpatient rehab the second half of the day. There she continued to improve with speech, occupational therapy and physical therapy. Summer came and went and she participated in her favorite activities such as gymnastics and softball.

In May of 2016, the family met with an interventional radiologist, so Cailee could get a follow-up angiogram. The test finally confirmed Cailee had indeed suffered a brain AVM – and it was 7 millimeters by 9 millimeters in size. Doctors could now confirm that an AVM was present because the clot was decreased in size; beforehand it was obscuring the AVM. Although the family had thought Cailee had already been “cured”, they were relieved to finally have a definite diagnosis.

The family met with a neurosurgeon in Sioux Falls while also seeking as many opinions as possible; including experts from Fargo, ND, and at Mayo Clinic. A doctor in Fargo recommended The Cleveland Clinic. Within a week a video conference with Peter Rasmussen, MD was scheduled. From that point on, they knew right away, no matter the distance and with advanced technology the Cleveland Clinic had to offer, that was the best fit for Cailee.

After receiving many opinions from different neurologists and neurosurgeons, everyone seems to be amazed at Cailee’s recovery due to the size of the bleed she originally had. However, it’s still been a tough journey for the family. “It’s hard to put this experience into words and it’s hard not to look at Cailee and wonder when something else will happen. We’re just so happy when something positive happens for her,” said Katrina.