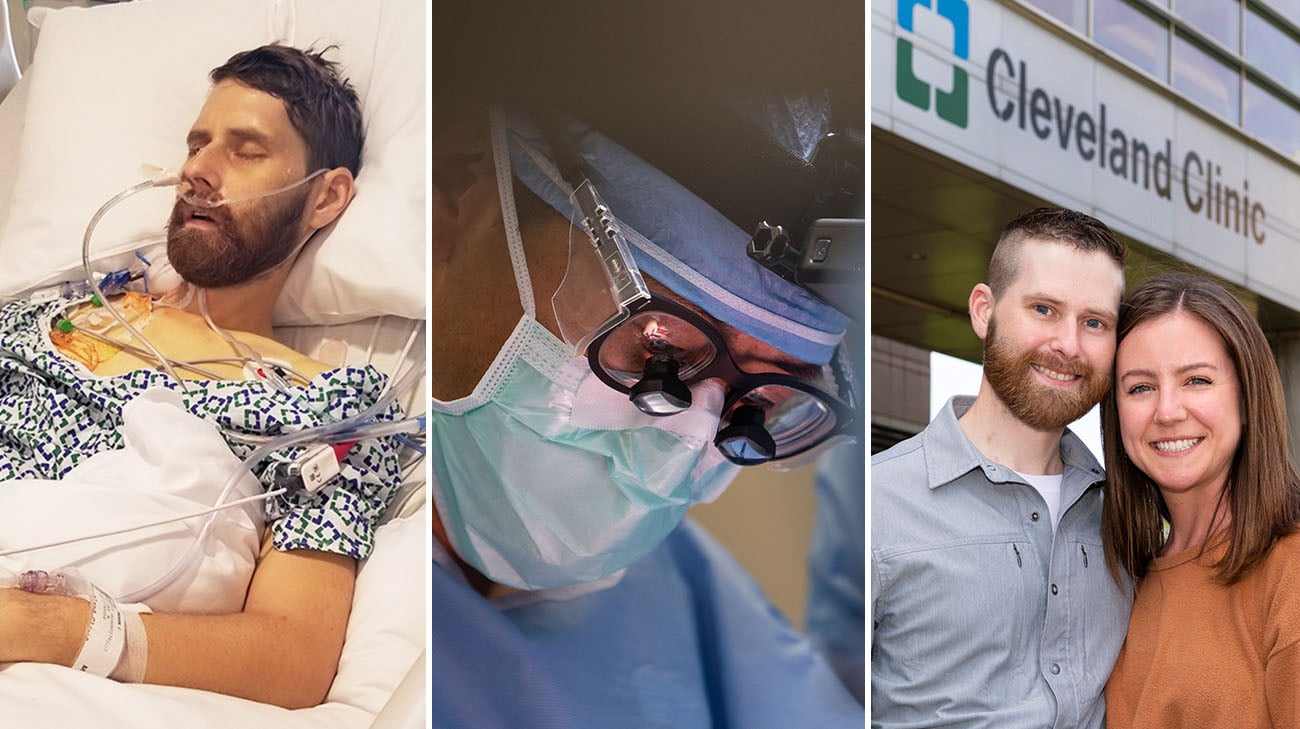 Tucked neatly inside a wooden box were 40 handwritten notes. Andy Voge carefully thought about each one, sharing details of a memory and a special song the 33-year-old had experienced with his wife, Rachel. Andy wrote out as many as he could with the intent they would provide Rachel hope and inspiration during the lengthy, life-saving multi-organ transplant he underwent at Cleveland Clinic on September 10, 2021.

During the 17-hour operation, surgeons removed Andy’s diseased organs. He then received the following deceased donor’s organs all together and at the same time: liver, stomach, pancreas and duodenum (pancreaticoduodenal complex), spleen, small intestine and right colon. The donor's spleen was initially transplanted to boost the immune protection of the newly transplanted organs and improve blood flow to the pancreas until fully transplanted. The donor's right colon was initially transplanted to help protect the new intestine from infection and improve its ability to absorb nutrients. Both the donor's spleen and right colon were removed prior to the completion of the transplant after they successfully served to protect the other organs during the operation. In turn, Andy would also be receiving a new lease on life. Following the diagnosis of an extremely rare form of appendix cancer called pseudomyxoma peritonei (PMP) and the failure of conventional treatments that included surgery and chemotherapy, Andy was told he had six months to live.

Andy received the following deceased donor’s en bloc organs: liver, stomach, pancreas and duodenum (pancreaticoduodenal complex), spleen, small intestine and right colon. Both the donor's spleen and right colon were removed prior to the completion of the transplant after they successfully served to protect the other organs during the operation. (Courtesy: Cleveland Clinic)

Anil Vaidya, MD, led the seven-surgeon team that completed the pioneering operation, as Andy became the first person in the world to successfully undergo a full multivisceral transplant to treat PMP.

“Andy had one of the more advanced cases of PMP I’ve seen,” says Dr. Vaidya, who joined Cleveland Clinic in 2020 as Intestinal Transplant Program Co-Director. “While about 80% of patients with the condition can be treated with traditional therapies, what do you do with the 20% for whom the traditional therapy isn’t successful? In some cases, the answer may be a multivisceral transplant.” 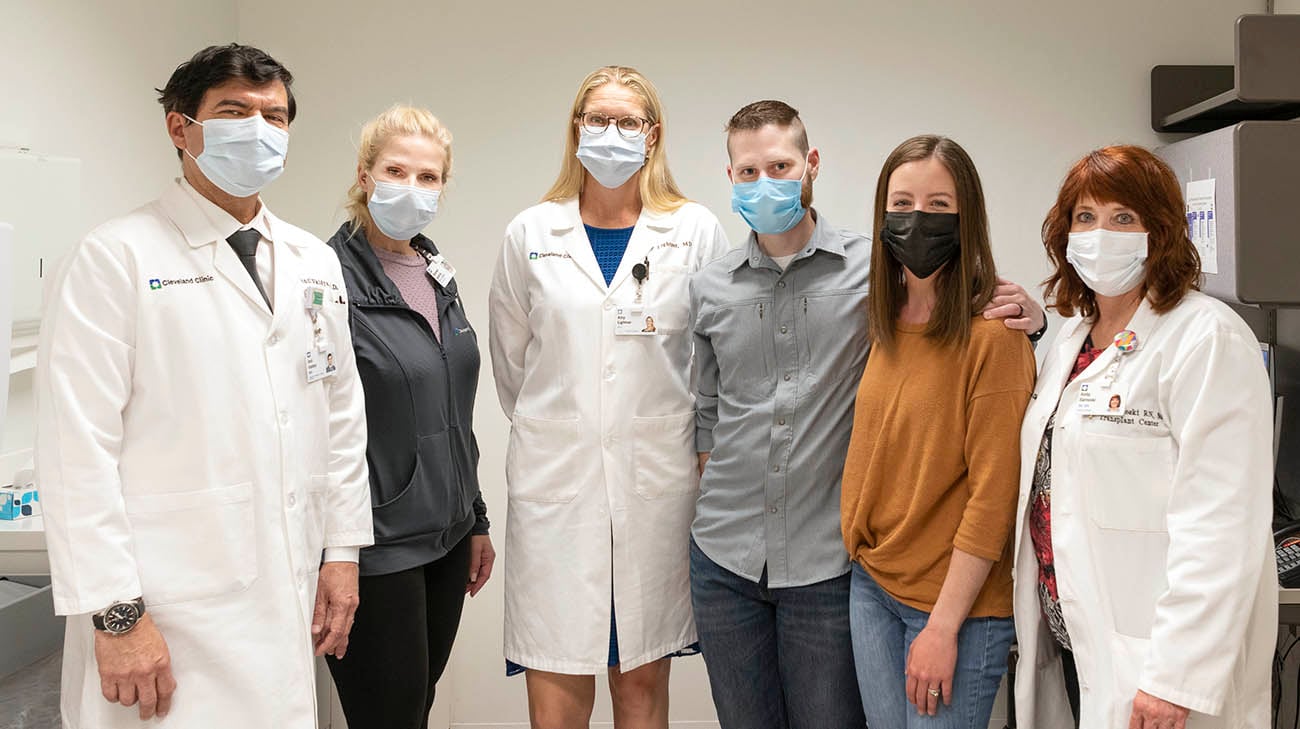 Andy’s ordeal began when he experienced signs of an umbilical hernia in 2019. He visited his primary care physician, and as part of the pre-surgical process, underwent blood tests. That’s when it was discovered Andy had PMP, a rare cancer that typically originates as a tumor in the appendix. When the slow-growing tumor ruptures, its jelly-like content spreads to other digestive organs, with additional tumors developing that impair gastrointestinal function. Malnutrition and life-threatening complications ultimately occur.

“It was pretty shocking. I didn’t have much in terms of symptoms, other than the hernia,” says Andy. “I learned it’s quite common to go months or years without even knowing you have it.” Adds Rachel, “We were in disbelief. At first, you don’t even know what to ask, or say, or think. We didn’t know what to do.” 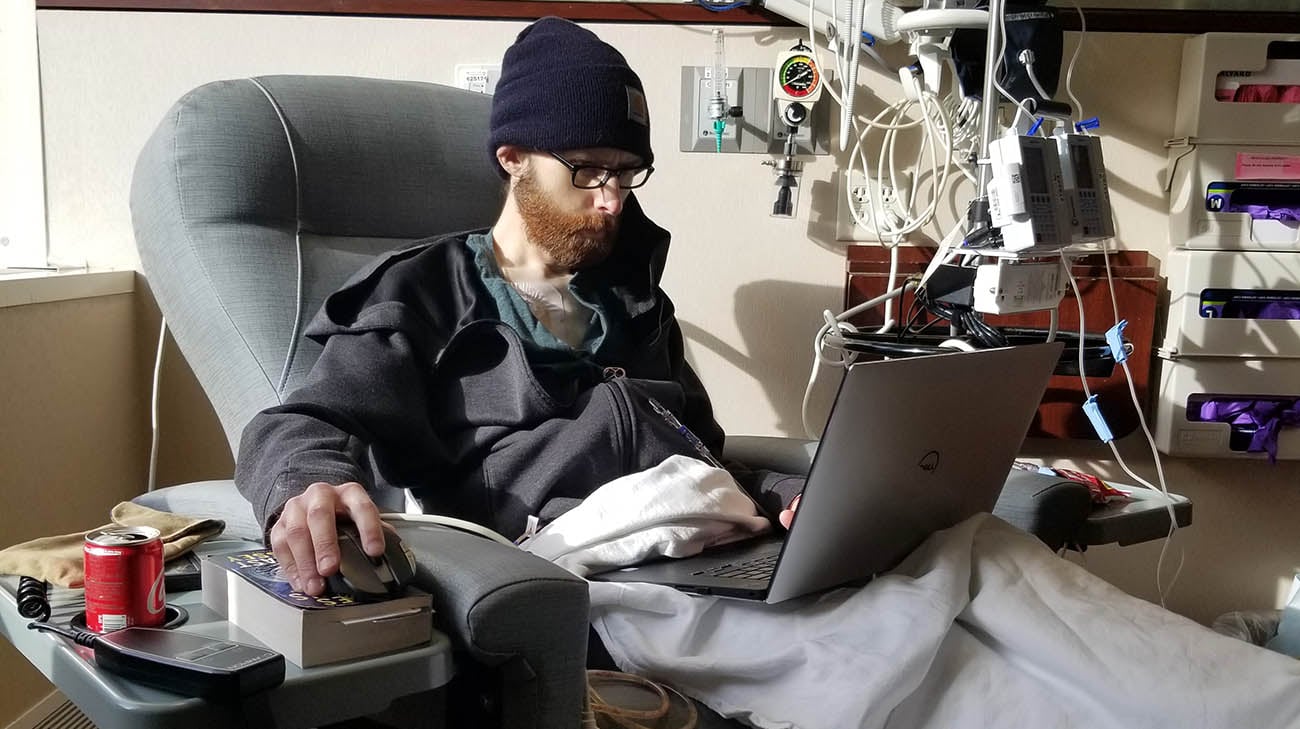 Andy receiving chemotherapy in February 2021 as part of initial therapies to try and treat his cancer. (Courtesy: Andy and Rachel Voge)

Fortunately, a friend recommended Andy visit a PMP specialist in their home state of Minnesota, beginning a long odyssey of treatments followed by hope-crushing setbacks over a number of years. Within weeks of diagnosis, Andy underwent a 9-hour operation called cytoreduction surgery, which removed about 80% of the tumors. The procedure was complemented by rounds of hyperthermic (or heated) intraperitoneal chemotherapy (HIPEC), which involves heated chemotherapy being delivered directly inside the abdomen to help destroy remaining cancer cells and very small tumors.

Andy recovered quickly and returned to work as a design engineer. However, a year later, a follow-up CT scan revealed the cancer had returned. Andy was one of the 20% of patients with PMP for whom the traditional treatments were ineffective. Often, this population of patients is left with few to no additional treatment options.

“Right after my first surgery, Rachel and I adopted a methodology of ‘live a day at a time,’” states Andy. “And that was really tested once the cancer came back, because we never knew what was going to change (with my condition) each day.” 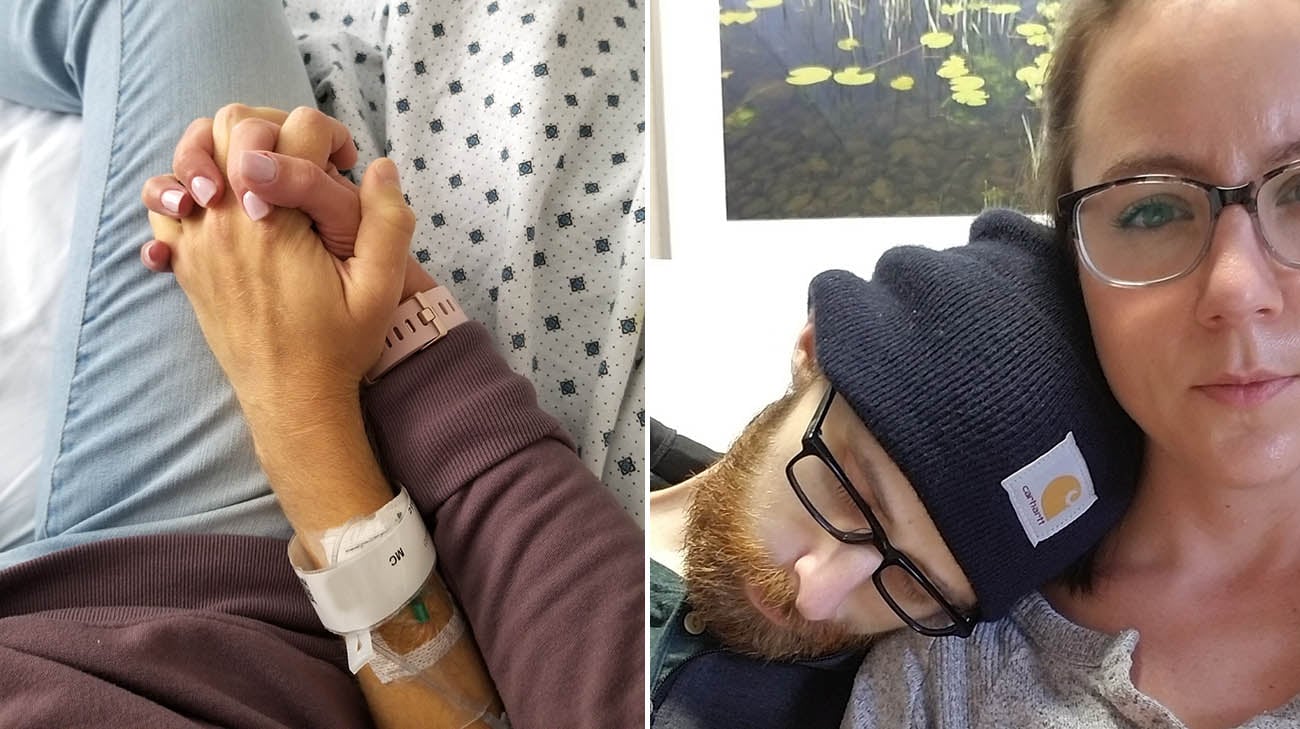 Rachel has stayed by Andy's side every step of his cancer and transplant journey. (Courtesy: Andy and Rachel Voge)

Over the next year, Andy endured countless operations and medical procedures in a race against time, as the tumors continued to slowly invade his digestive organs. Some treatments brought relief, but only temporarily. Ultimately, his stomach shut down because Andy states, “Doctors discovered the tumor had completely encapsulated the organ, and it no longer could pass food along to my intestine.” Andy had to stop eating for the next 14 months, with his only sustenance coming intravenously through total parenteral nutrition (TPN).

As his condition worsened, Andy stopped working. So, too, did Rachel, a graphic designer, who served as his primary caregiver. In February 2021, Andy nearly died from a bowel obstruction. His physicians revealed he likely had just six months to live, at best, and should consider hospice care.

“I wasn’t mentally in the spot yet to be done, to give up,” recalls Andy. However, he and Rachel formed a nonprofit organization, which Andy hoped would be his legacy. The plan was – and remains – to build a mobile workshop and travel to schools and communities to educate teens and young adults on the crafts of wood working, metal working, electronics and computer-aided design. 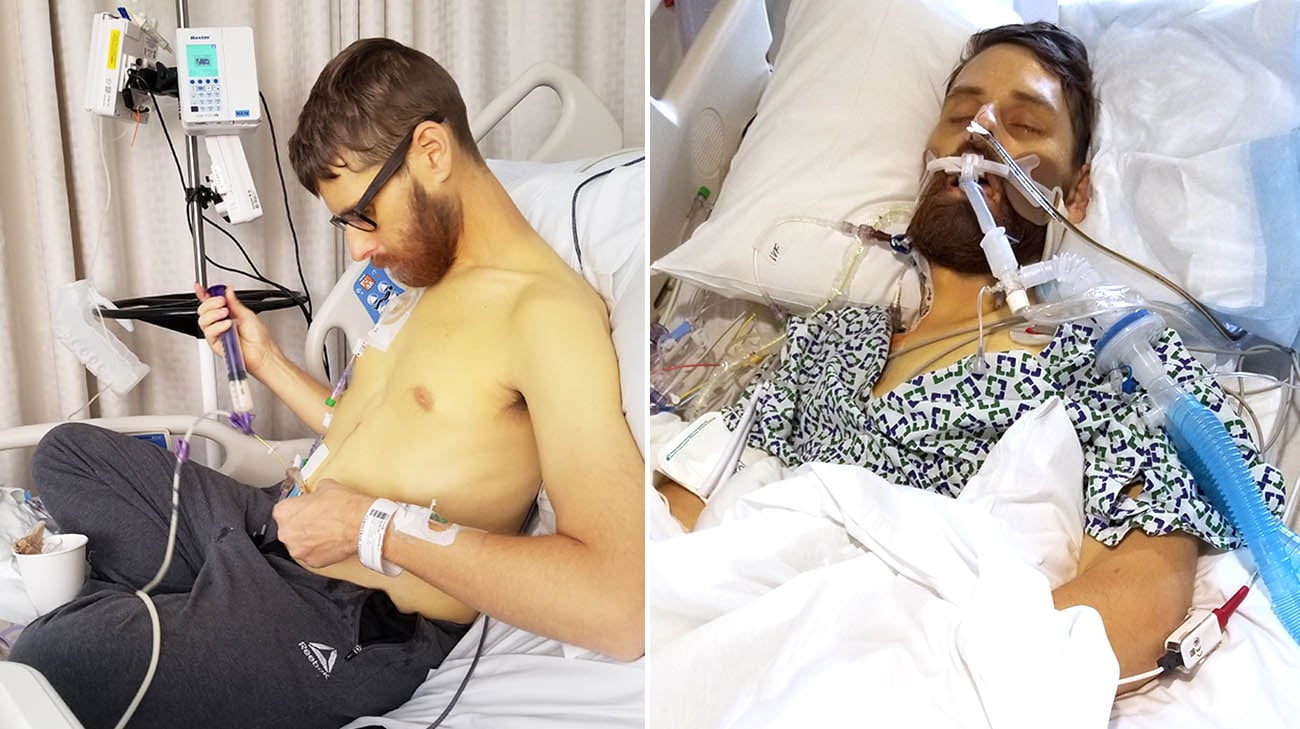 Andy was one of the 20% of patients with PMP for whom traditional treatments were ineffective. (Courtesy: Andy and Rachel Voge)

“Learning to build and design things has shaped every aspect of my life,” Andy wrote on the organization’s website. “I would probably not be an engineer today if I had not sparked an interest early in life of trying to figure out how things worked."

Andy was hanging on and establishing the nonprofit. He didn’t know yet the only hope for a treatment was a multi-organ transplant.

Prior to joining Cleveland Clinic, Dr. Vaidya was the leader of Oxford (UK) University Hospitals’ intestinal transplant program. There, he performed the world’s first modified multi-organ transplant (without a liver) to treat a patient with PMP who didn’t respond to traditional therapies.

At Cleveland Clinic, one of Dr. Vaidya’s colleagues, Amy Lightner, MD, colorectal surgeon and Director of Cleveland Clinic’s Center for Regenerative Medicine and Surgery, had formerly worked with Andy’s doctor in Minnesota. Once Dr. Lightner made the connection, Dr. Vaidya felt he could treat Andy. Andy suddenly had a new lease on life. “I went through a weird mix of emotions at that point,” says Andy, who had already planned his funeral service. “I felt like I was dying, and then to have news we had a potential fix was amazing. But I knew it was major surgery with lots of potential risks.”

Nevertheless, within weeks of their first consultation with Dr. Vaidya, Andy, Rachel and their Labrador retriever moved to Cleveland, Ohio, settling in an apartment at a suburb nearby. By that time, Dr. Vaidya had completed a thorough assessment of Andy’s case and received approval from Cleveland Clinic’s Intestinal Transplant Selection Committee to proceed. 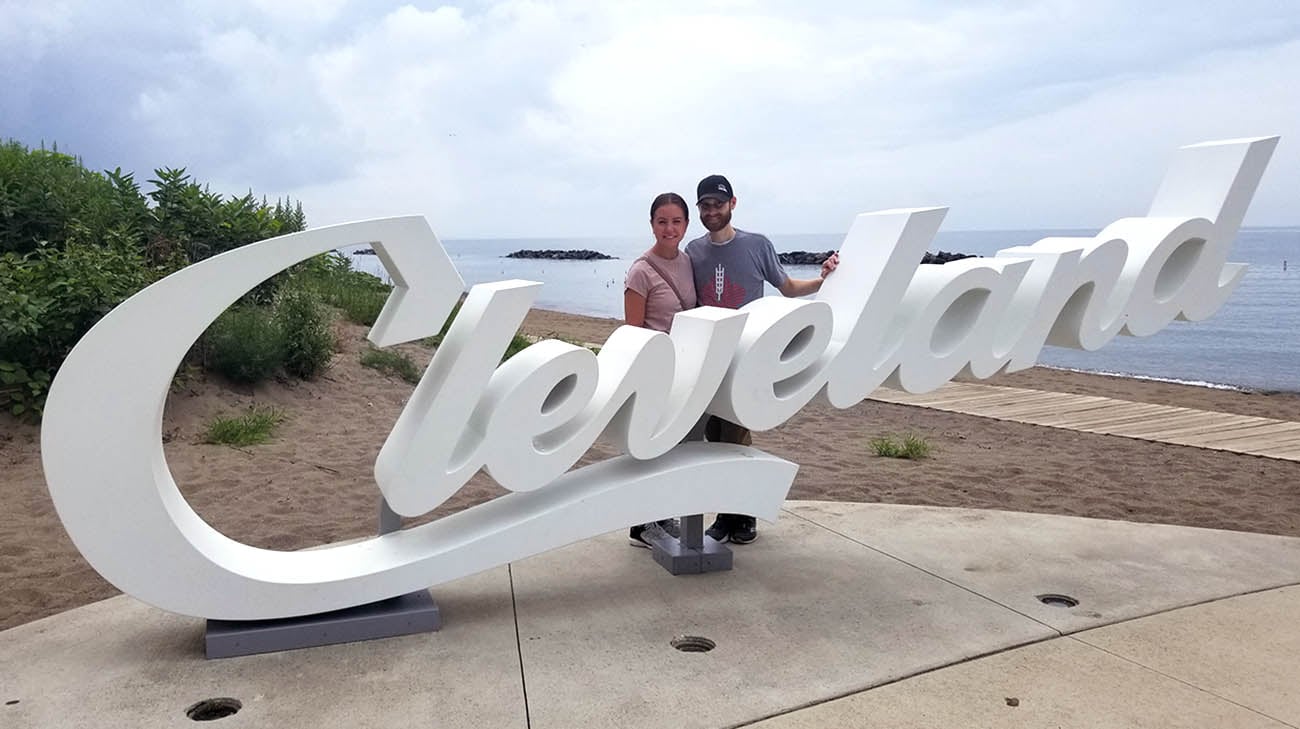 Andy was placed on the national transplant waiting list in July 2021, and the waiting game began. With each passing day, Andy’s condition worsened, as the tumors began constricting his liver. Andy was jaundiced and losing energy. As Rachel recalls, “We were getting to the point of: Are we going to receive an offer in time? Or, will Andy die waiting on the list? The clock was ticking.”

Upon entering Cleveland Clinic in early September 2021 to undergo a procedure to drain bile from his damaged liver, Andy received a visit from Dr. Vaidya. A donor had been found. Less than 24 hours later, Andy was undergoing groundbreaking surgery. Meanwhile, Rachel opened the box Andy packaged, reading the encouraging notes he had prepared for this exact occasion. 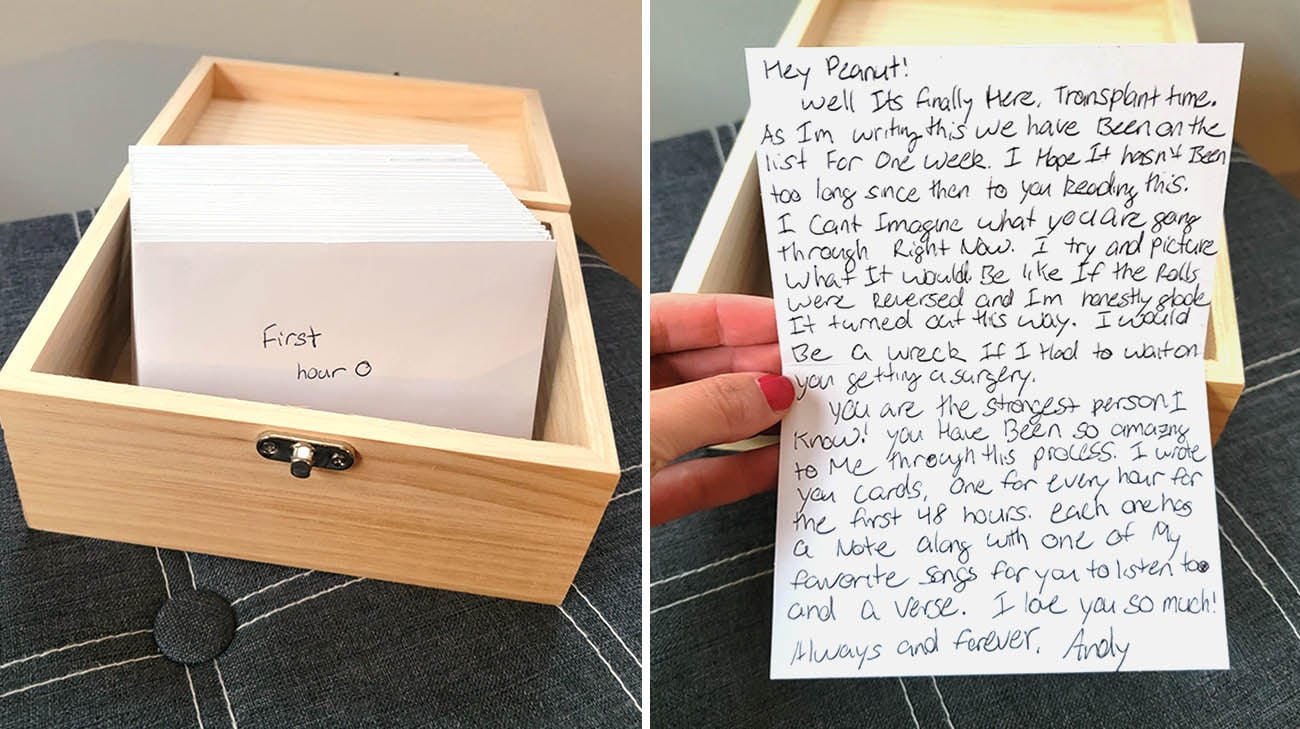 Andy wrote Rachel 40 notes, to be read while he was undergoing his transplant. The intent was they would give her a sense of support and hope while he was in surgery. (Courtesy: Andy and Rachel Voge)

As Dr. Vaidya explains it, Andy needed a liver along with four other digestive organs. “Andy had started to deteriorate quite rapidly. It was touch-and-go that he would make it.”

The first three hours of the surgery were preparatory, in essence removing the diseased abdominal organs. Next, the donor organs were inserted into the abdominal cavity, all the necessary vascular connections were completed and a left-sided ileostomy was created to handle bodily waste and let the body recover from the surgery.

“The operation was well-planned and went like clockwork,” says Dr. Vaidya. “The team members knew exactly what they were going to do, and the timing was perfect. It went really well.” 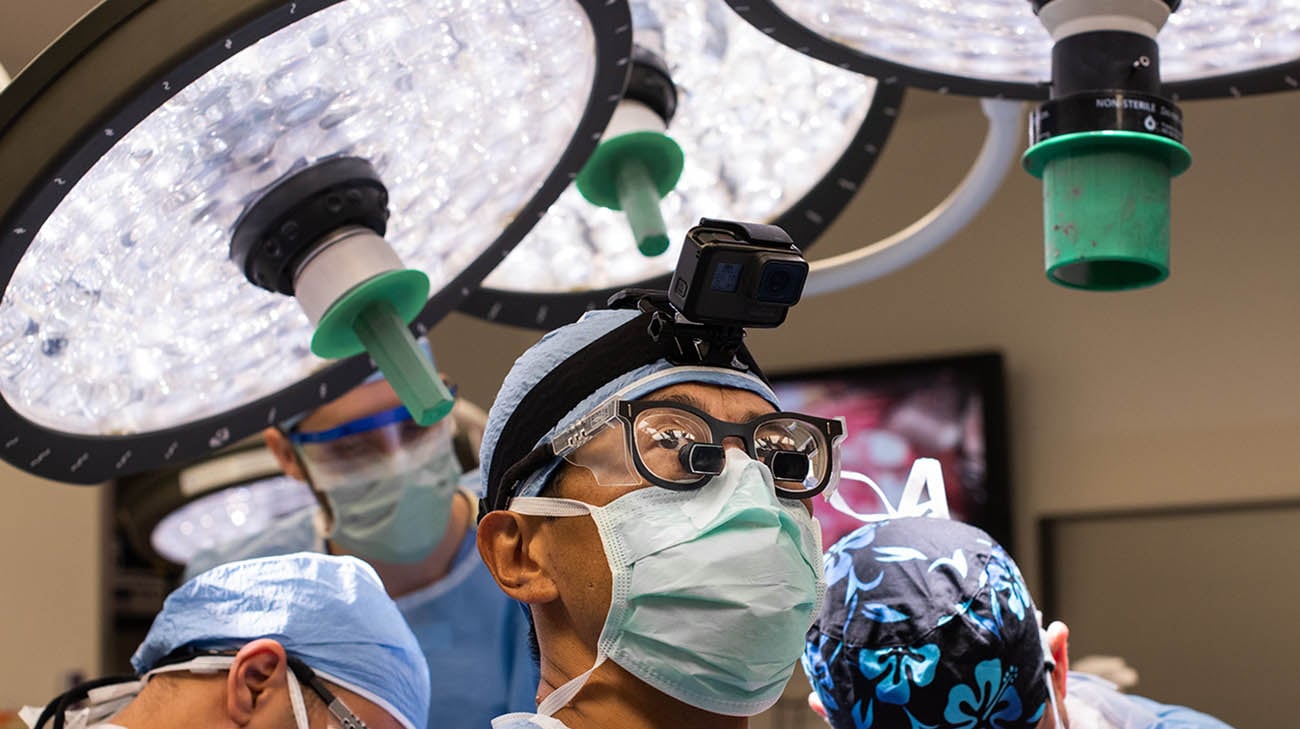 Not surprisingly, given the complex nature of the transplant, Andy experienced several postoperative complications. He remained in the hospital for 51 days. Soon after he was discharged, he returned because he was suffering from a case of graft-versus-host disease (GVHD), a common occurrence following intestinal or bone marrow transplants where the donated organs' immune cells recognize the recipient’s tissues as foreign and attack the body. 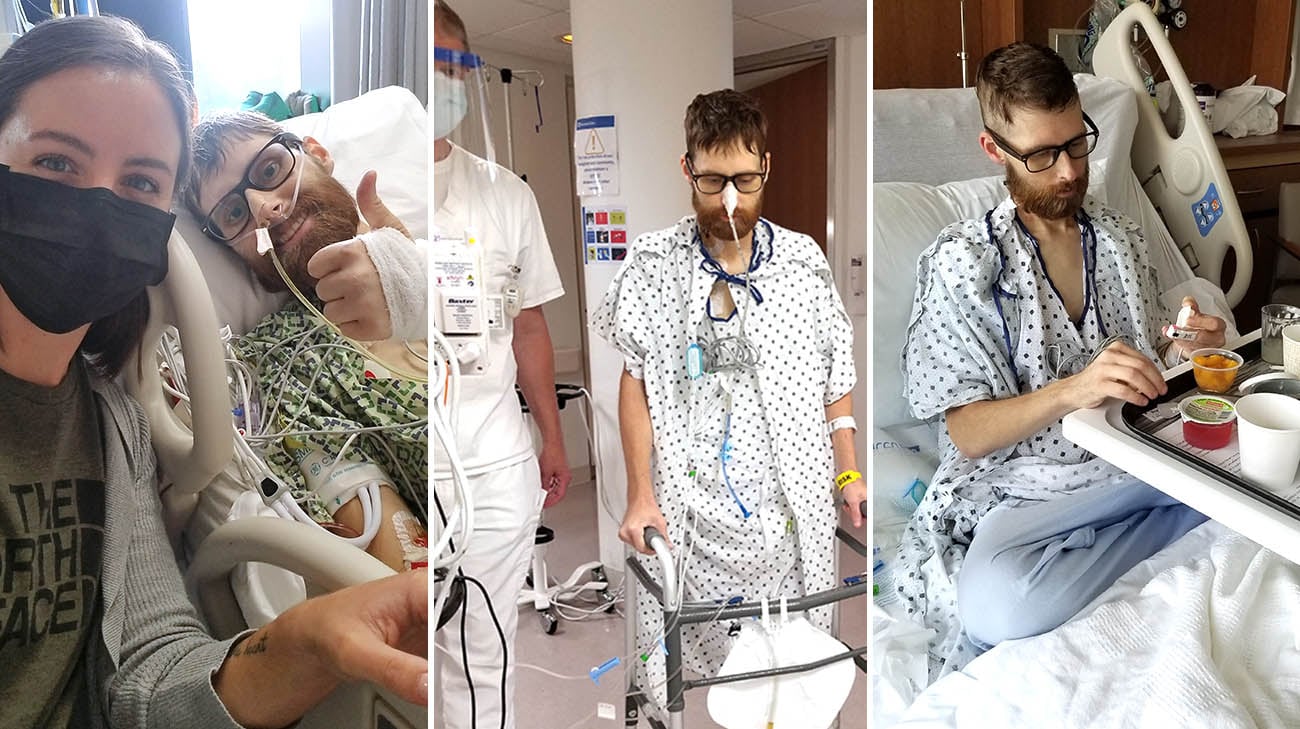 After transplant, Andy spent 51 days in the hospital, about half of them in the ICU. Slowly he regained strength to walk. (far right) Andy eating and digesting solid food for the first time in more than a year. (Courtesy: Andy and Rachel Voge)

Andy underwent a procedure perfected and performed by Dr. Lightner. She administered three doses of mesenchymal stromal cell (MSC)-derived exosomes, a first-ever, novel treatment for solid organ transplants — and a first for a patient who received a full multi-organ transplant to treat PMP.

According to Dr. Vaidya, “Andy’s recovery was absolutely amazing. His symptoms abated within two hours of the first dose.” 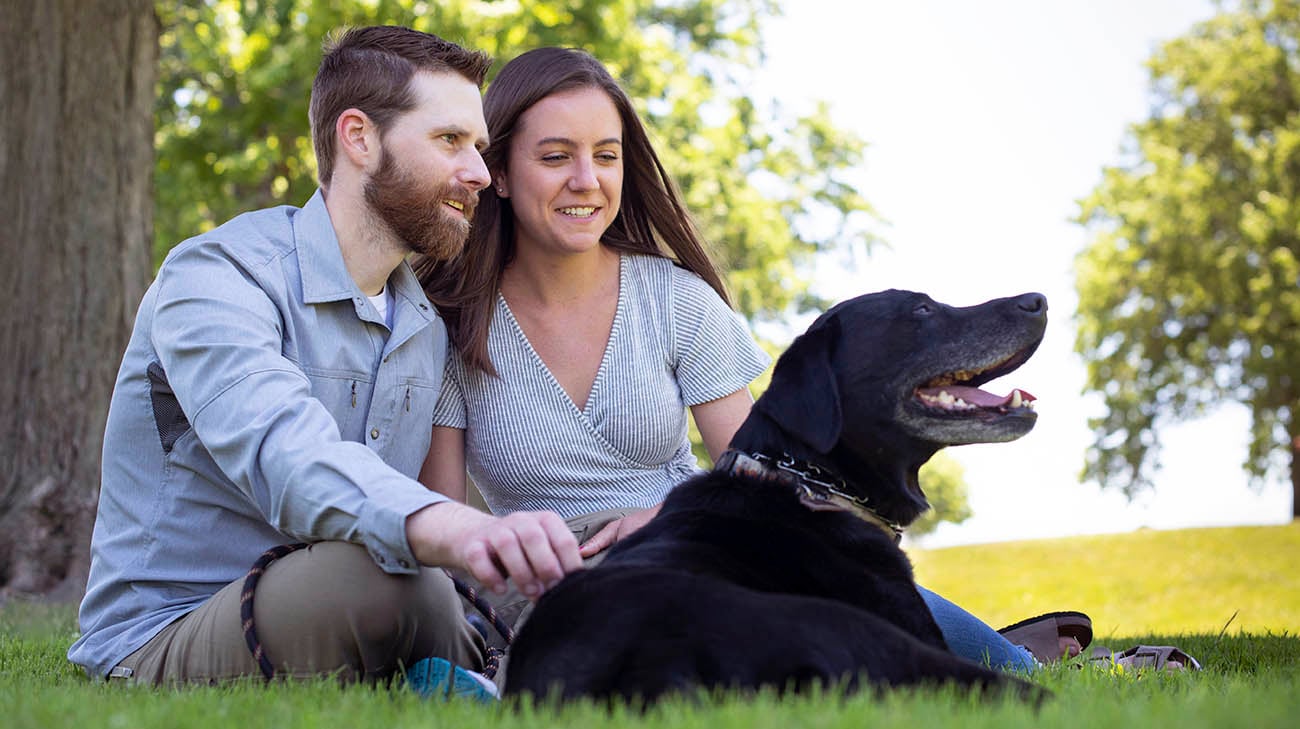 Andy, Rachel and their dog, Cooper, are living by the mantra, "Take one day at a time." (Courtesy: Cleveland Clinic)

Andy and Rachel plan to move back to Minnesota in August 2022. As his strength returns, Andy is enjoying the outdoors again - walking, biking and – most importantly – eating regularly. He has plans to get their nonprofit off the ground.

As for what the future holds for him and Rachel, they’re following their own advice. “We’re taking it one day at a time and enjoying every day,” he says.