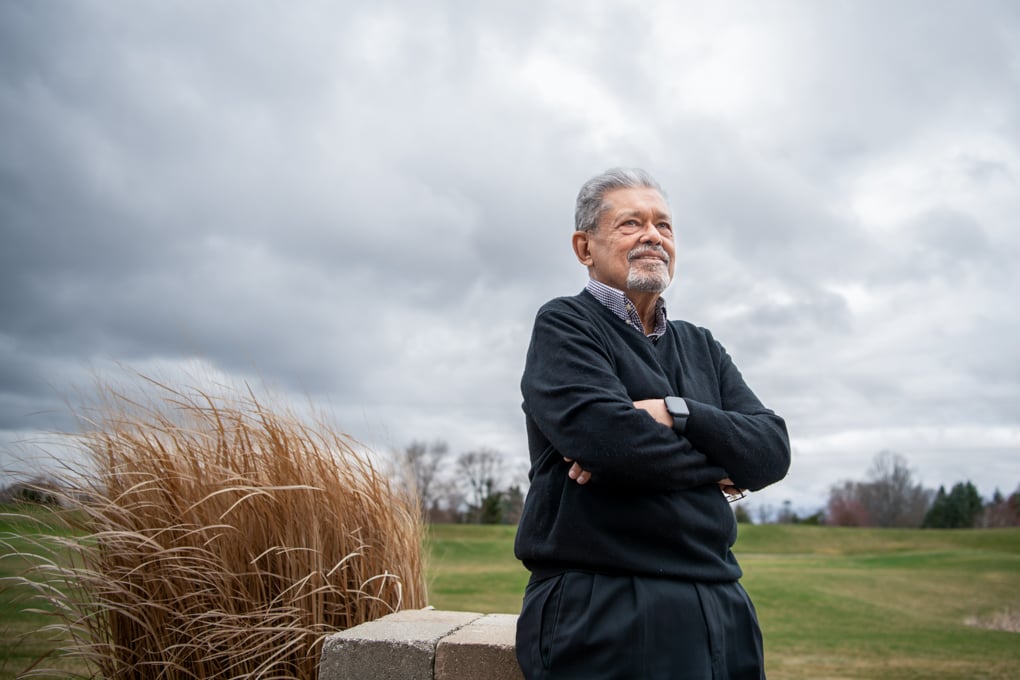 In 1987, Manmohan Sachdeva of Columbus, Ohio, had chest pains that led to quadruple bypass surgery. He did well until 2013 when he developed shortness of breath and needed a second bypass procedure. During this operation, a tumor was discovered in his chest cavity and diagnosed as a thymoma – a growth in the thymus gland between the lungs. When a biopsy reported the tumor was benign and slow-growing, Manmohan chose not to have additional surgery to remove it.

Three years later, Manmohan again had shortness of breath, but this time, it was due to that tumor, a thymoma – which actually is malignant – and was growing larger. His doctors told him that due to the tumor’s size and location (it was wrapped around one of his coronary bypass grafts), they could not remove it surgically and that his only options were chemotherapy and radiation. After seeking a second opinion and receiving the same advice, he was referred to Cleveland Clinic. There, Daniel Raymond, MD, a thoracic surgeon in the Department of Thoracic and Cardiovascular Surgery, assured him that he and his team could remove the growth safely.

“No one else wanted to do it, but Dr. Raymond told me, ‘We take difficult cases, and we know we can do it.’ I will always remember those words.”

Manmohan had a “fairly severe, rare cancer,” Dr. Raymond says. “It’s the only one I’ve seen after a coronary artery bypass graft.”

In January 2017, he and cardiac surgeon Michael Tong, MD, MBA, FRCSC, performed a complex, 11-hour surgery to remove the growth, which involved Manmohan’s coronary grafts and great vessels. “It was creeping out along his right lung, and we had to sacrifice the right phrenic nerve, which controls the right diaphragm,” Dr. Raymond says. “We also had to remove the mass from his cardiac and pulmonary structures.”

The tumor was so large that it also surrounded one of his earlier bypasses to the right side of the heart, Dr. Tong says. “We essentially had to sacrifice and replace this bypass, and also replace another bypass. We also had to free up all the scar tissue from the earlier surgeries and then remove the tumor, part of the aorta, superior vena cava, pulmonary artery and pulmonary vein to ensure all the tumor was removed in its entirety.”

Dr. Tong used Dacron®, a fabric, to replace the part of the aorta that was removed. He also reconstructed the superior vena cava, which carries blood from the head, neck, arms and chest, and the pulmonary artery and vein.

The team’s advanced skills and experience in performing complex cardiopulmonary surgeries contributed to a successful outcome. “We were able to do it because we work together,” Dr. Tong says. “Dr. Raymond, a thoracic surgeon specializing in thoracic oncology, is familiar with the lung structures, airways and lymph nodes. My expertise is in reconstructing the heart and the bypasses.”

In cases like this one, Dr. Tong says, “a clear understanding of the anatomy is paramount, as well as a clear understanding that we must not only get the cancer out in its entirety but also reconstruct all the essential structures to ensure that it’s not going to cause any impairments. This is where a Center of Excellence can ensure that those two things are accomplished because they are the most critical aspects for long-term survival and quality of life.” 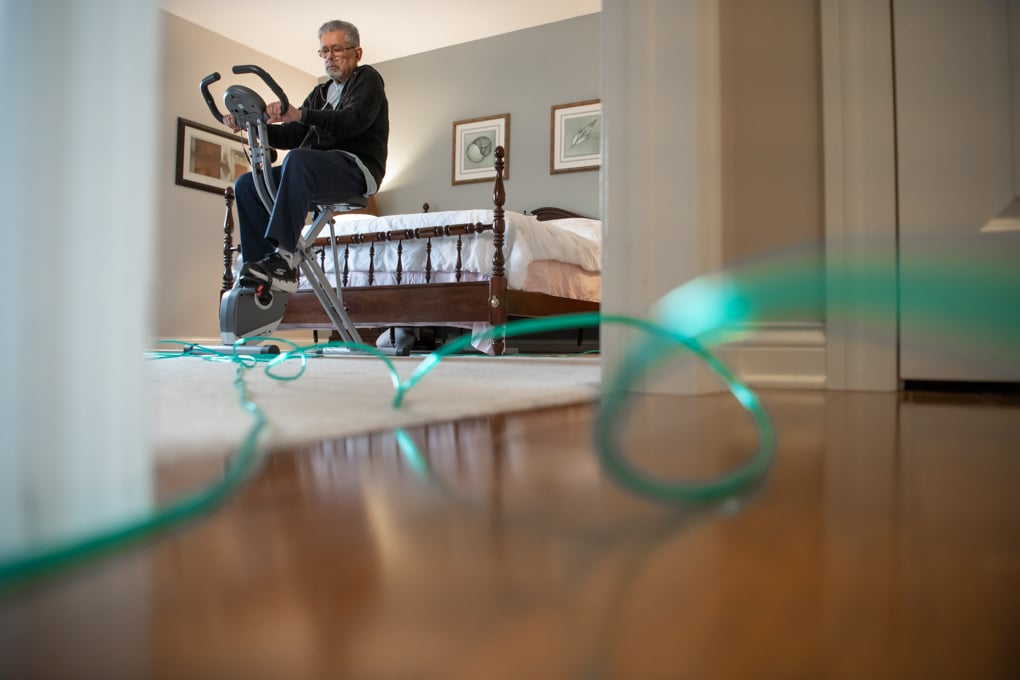 Manmohan has made significant lifestyle changes to address his breathing problems, including regular exercise.

Today, five years later, Manmohan is 75 years old and considered to be cured of cancer, Dr. Raymond says. He also made significant lifestyle changes to address breathing problems he experienced after surgery and post-operative radiation therapy. He stopped drinking alcohol, modified his food portions, and began walking and biking regularly, all of which have led to a weight loss of 40 pounds. He says he hopes to lose even more and that Dr. Raymond has inspired and supported him in these efforts.

“It’s quite remarkable because it’s very hard for patients with limited lung function to exercise,” Dr. Raymond says. “Manmohan’s desire to recover has had a profound effect on his ultimate outcome, and I admire him for what he did. He’s taken control of his situation and really changed his quality of life.”

Dr. Tong agrees. “Managing blood sugar, blood pressure, cholesterol levels, and, of course, not smoking, are the four most important things to ensure that the bypasses we do remain durable and disease-free. More specifically, in his case, because we had to sacrifice his phrenic nerve, his right diaphragm became paralyzed. If you have a lot of extra weight in your belly, it can push up against the diaphragm and the lung and keep the lung from inflating. In patients who are overweight and have paralyzed diaphragms, sometimes their breathing can be more difficult, particularly when they’re lying down. This is where weight loss really can help. Losing 40 pounds means that there’s a lot less pressure on his chest and belly, which relieves a lot of pressure on his lungs and ensures that he can breathe well.” 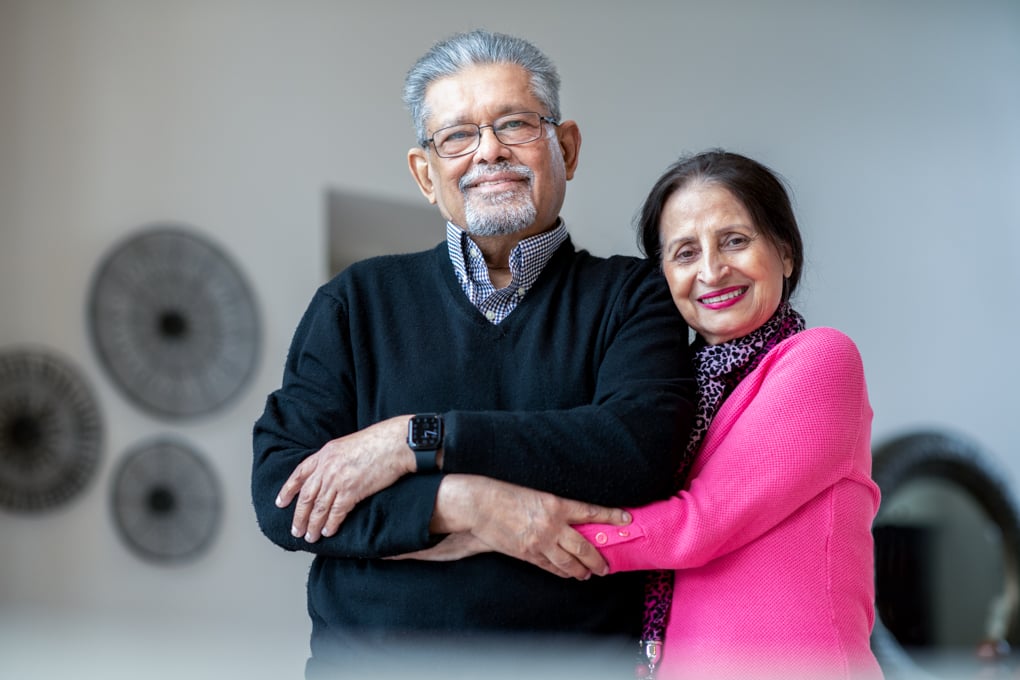 Grateful for his cure, Manmohan and his wife, Neelam, are enjoying life.

Manmohan is enjoying life once again, including his ability to travel. “I’ve been doing a lot of driving, to Pittsburgh, Cleveland and Toronto,” he says. “I even went to India two years ago.”

He is grateful for the medical care that made these new adventures possible. “The doctors at Cleveland Clinic are incredible, and the nursing staff is superior. They went above and beyond for me and my family,” Manmohan says. “I know in my heart that if I had not gone to Cleveland Clinic, I would not be alive.”