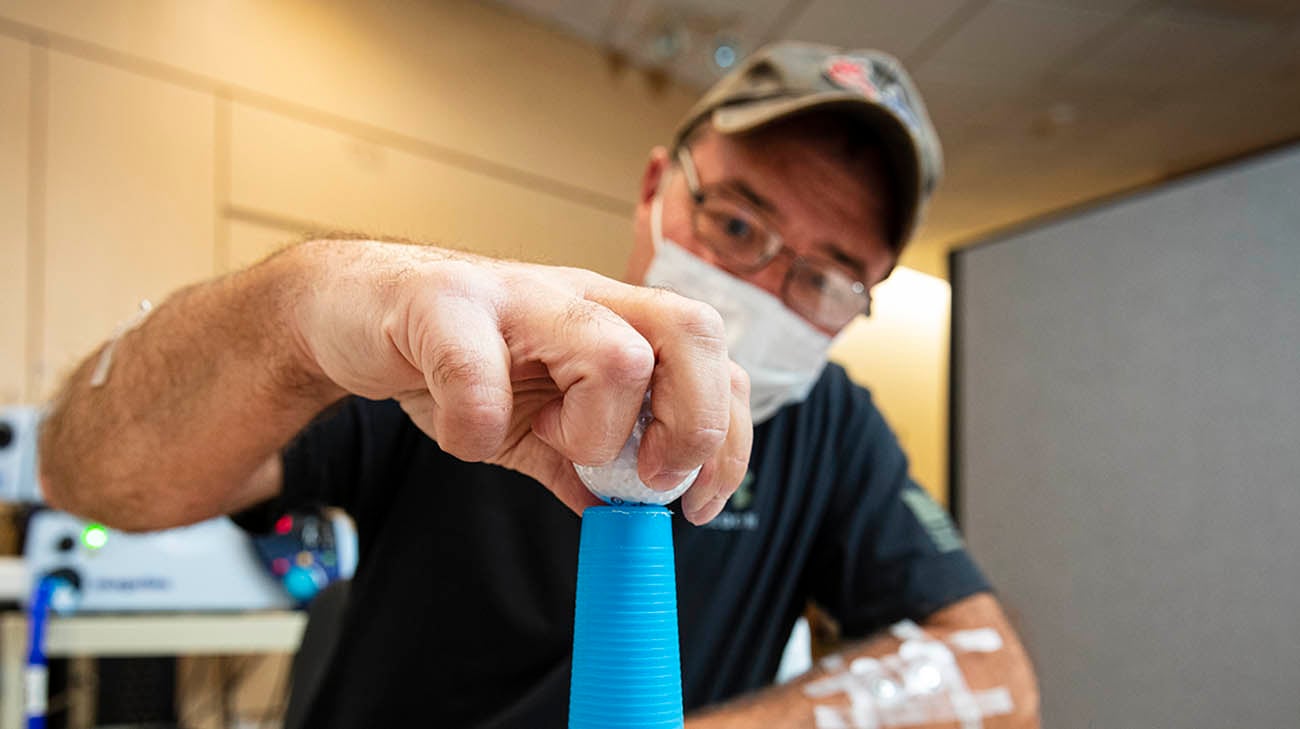 Joe Schwappach, a fleet manager for a pork company, suffered an arm injury on the job while helping herd pigs who had escaped from an overturned truck. He expected the 45-minute surgery near his home, outside St. Louis, would be simple. He even planned to get ice cream afterwards.

Instead, the 50-year-old resident of Grainfort, Illinois, vaguely remembers being transported to an Omaha, Nebraska, hospital after suffering a stroke during the outpatient procedure to repair his torn bicep. It paralyzed most of his right side and left him with limited ability to speak. He spent four months in two Omaha rehabilitation facilities, undergoing physical, speech and occupational therapy.

Joe slowly regained his speech and ability to walk, both of which are now nearly back to normal. But he had little control of his dominant right hand, which he needed as part of his job managing a team of truck mechanics and often pitching in to help. 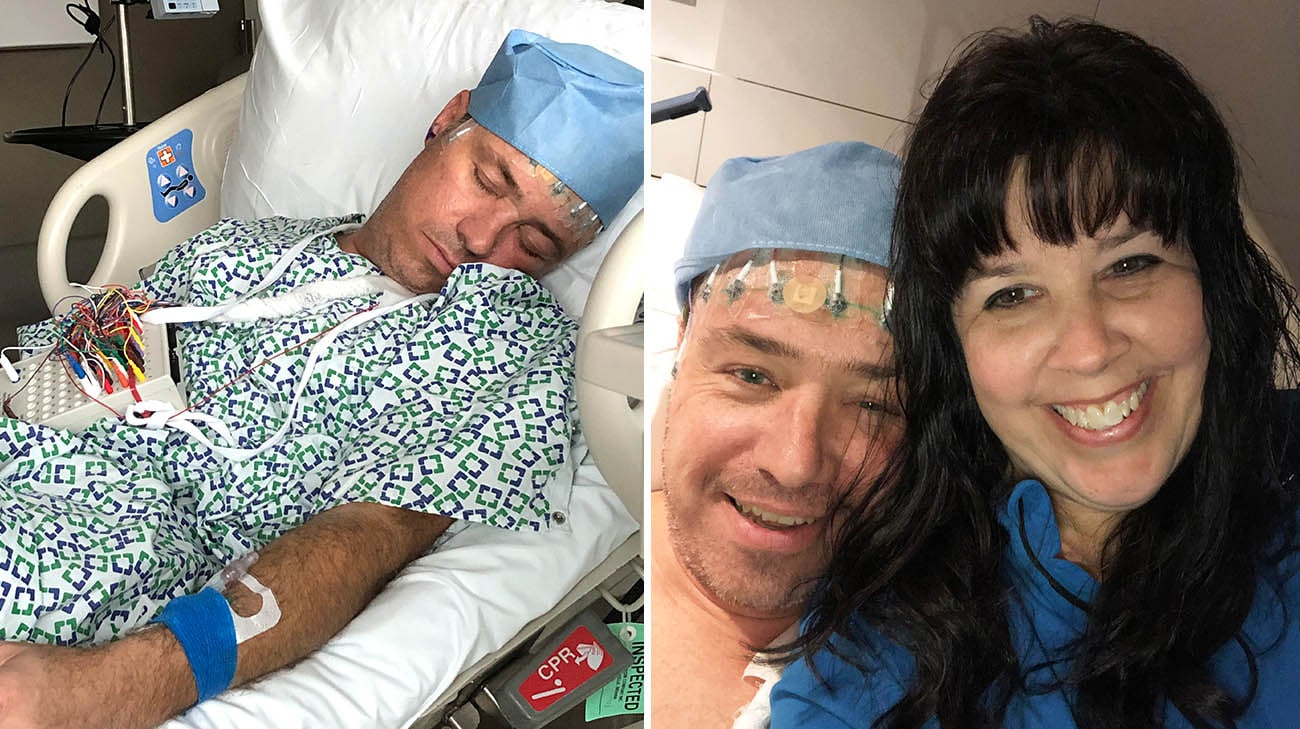 Joe with his wife, Stephanie, after his first DBS surgery. (Courtesy: Stephanie Schwappach)

“I’m naturally right-handed, and I couldn’t brush my teeth, tie my shoes or move a coffee cup up or down,” Joe recalls. “I had made a lot of progress, but my hand wasn’t getting much better.”

Upon returning home in June of 2018, he visited a neurologist who suggested Joe investigate whether there were any clinical trials for treatments. He and his wife, Stephanie, poured through information online.

They discovered Cleveland Clinic’s deep brain stimulation (DBS) study for patients with weakness after stroke, the number one cause of long-term disability in the U.S. After calling to seek more information, Joe found himself in Cleveland, Ohio, two weeks later for tests and exams. He was accepted into the EDEN trial (Electrical Stimulation of the Dentate Nucleus for Upper Extremity Hemiparesis Due to Ischemic Stroke), which is supported by the National Institutes of Health’s BRAIN initiative and Enspire DBS Therapy. Joe is one of 12 participants in the trial.

Deep brain stimulation is a surgical procedure that involves implanting electrodes in the brain, which deliver electrical impulses that block or change the abnormal activity that cause symptoms. (Courtesy: Cleveland Clinic)

“He had limited use of his hand. It really wasn’t functioning,” explains Andre Machado, MD, PhD, who is Chairman of the Cleveland Clinic Neurological Institute. “He couldn’t do as much manual work, with both hands, and that was a limitation for his quality of life.”

For the study, Joe first underwent two surgical procedures -- one to insert the DBS device under the skin of his chest, just below the collarbone, and the other, to implant the DBS electrode in a part of the cerebellum called the dentate nucleus. Once activated, the device, called an implantable pulse generator, serves as a specially-calibrated pacemaker for the brain, stimulating it to try and enhance motor rehabilitation. 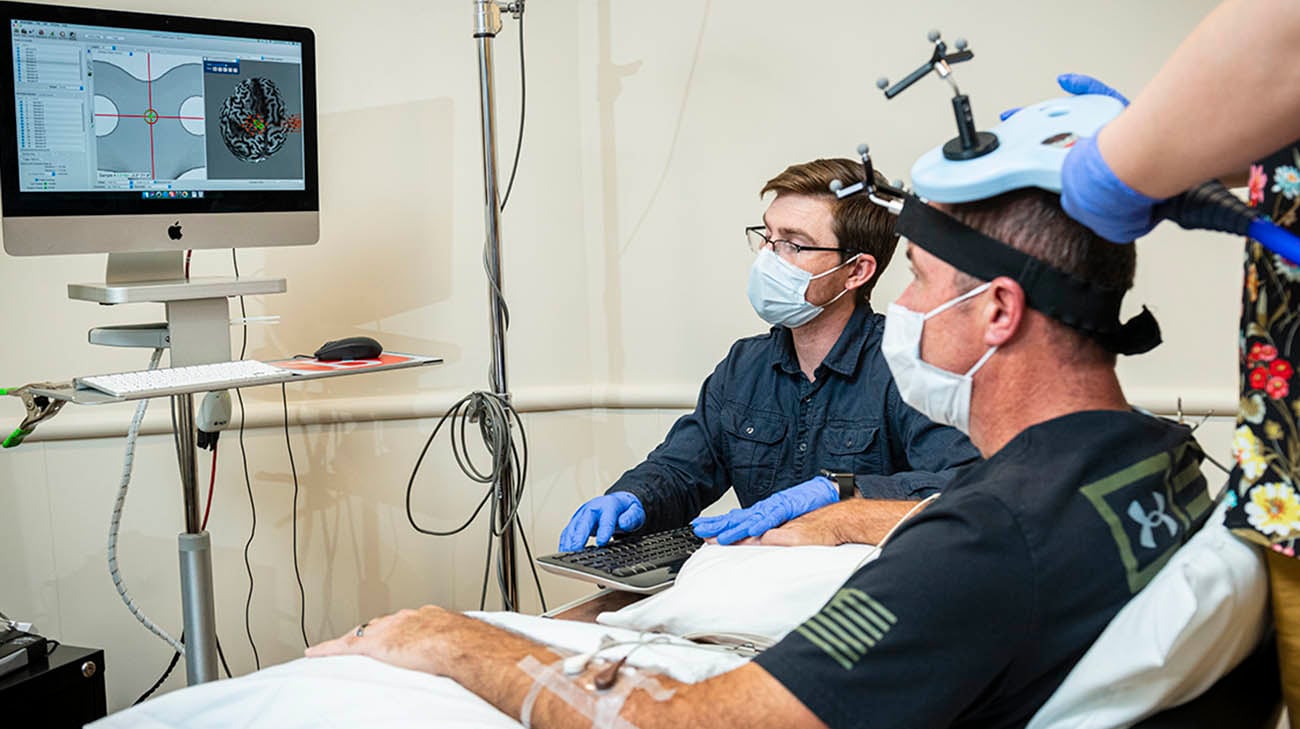 Joe said wearing the device came with no side effects. Three times a week, he would undergo virtual physical therapy, with a Cleveland Clinic therapist, who would lead Joe through various activities while viewing the effect of DBS on his brain waves. Once or twice a month, Joe would return to Cleveland Clinic for follow-up tests and to recalibrate the device.

In October 2021, Dr. Machado and researcher Kenneth Baker, PhD, presented data that showed DBS can improve hand and wrist function for people who have had a stroke.

According to Dr. Machado, all 12 trial participants experienced some level of functional enhancement. Joe was among seven who showed substantial improvement from the combination of DBS and physical therapy. 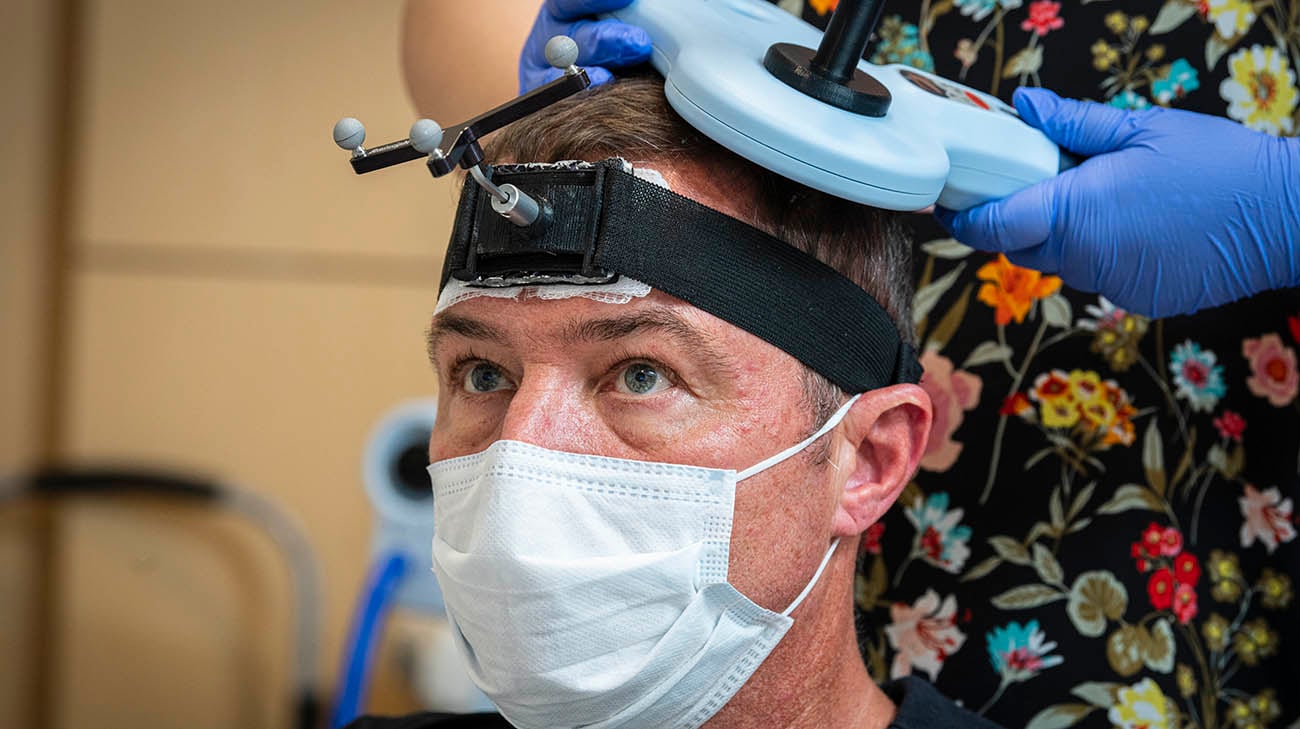 Joe says he still has a road ahead, but is grateful for the tasks he can accomplish now he never dreamed he'd be able to do. (Courtesy: Cleveland Clinic)

“We learned that patients who came into the study with even a little bit of leftover function in the affected hand did better than patients who had no wrist or hand movement whatsoever,” says Dr. Machado, who is currently planning a larger, multi-center trial that will test DBS with and without physical therapy. “It has been very meaningful for our researchers to see these improvements. It motivates us to work even harder.”

Joe, whose DBS device was surgically removed in mid-October after two years of use, believes he is now 85% recovered from the initial effects of the stroke. Regarding his right hand, “I can sense when people are touching my hand, and I’m still working on developing fine motor skills for some tasks. The study did help me, and I know that what (the researchers) learned will help a lot of other people in the future.”