Patient’s Ability to Speak, Eat and Chew Is Restored After Cancer Treatment 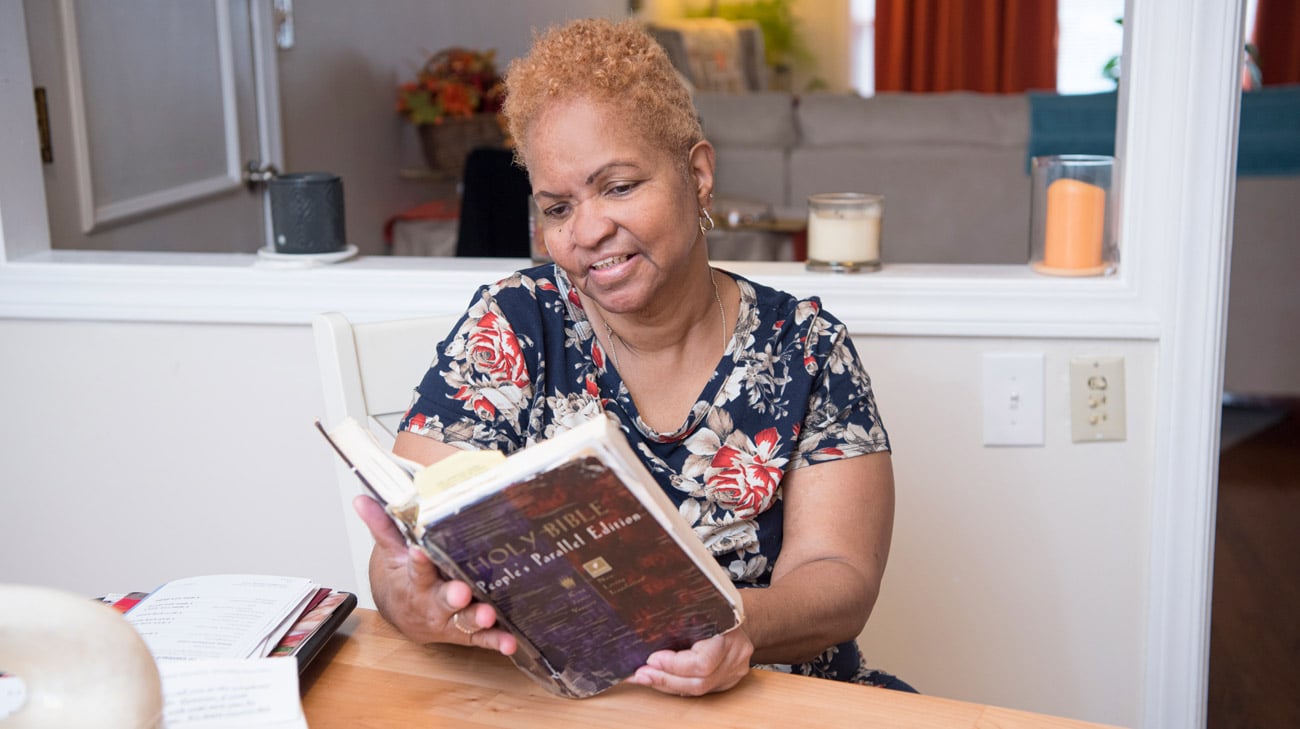 For many years, Cheryl West suffered chest pains and anxiety. She also had issues with her mouth.

“You know how it is when you have something that’s off in your mouth – my tongue kept going to a bump on the roof of my mouth. The bump hurt and ended up with a callus on it due to the ongoing touching with my tongue. When I saw a dentist, he peeled the callus off, but a painful, purple bump remained,” says Cheryl.

Cheryl’s dentist did a biopsy and the result was cancer of her palate, which had also spread to the right side of her face. He referred her to Cleveland Clinic.

“Cheryl had a long history of having a low-grade cancer of her palate. By the time we saw her, she basically had involvement of the entire hard palate,” says Brian Burkey, MD, MEd, FACS, Vice-Chairman and Section Head of Head and Neck Surgery & Oncology at Cleveland Clinic’s Head & Neck Institute.

In 2011, Dr. Burkey surgically removed the right side of Cheryl’s hard palate, her entire maxilla (jawbone), as well as the entire lower rim, floor and inner wall of her eye socket, a portion of her soft palate and some lymph nodes in her neck. This created an extremely complex and deforming defect which, if not properly fixed, could compromise her speech, eating and eye function.

“Even a small hole in the palate can markedly affect the quality of an individual’s life. That hole between the mouth and nose makes it difficult to eat, and affects the sound of their voice,” says Dr. Burkey.

According to Michael Fritz, MD, Section Head of Facial Plastic and Microvascular Surgery, also a part of Cleveland Clinic’s Head & Neck Institute, a resection of this magnitude presents one of the more difficult reconstructions encountered in facial plastic surgery.

“In addition to the difficulties with speech and eating, without proper restoration of the maxilla, the face will appear caved in, the eye will sink, and the patient will see double and look deformed,” says Dr. Fritz. “Years ago, when we were faced with these types of defects, there were no great existing techniques which could solve all of the issues related to establishing a good cosmetic and functional outcome. All of the described techniques used free tissue transfer, which is essentially a transplant of tissue from another part of the patient’s body to the face, hooking up a new blood supply under the microscope. Some included bone transfer and soft muscle or soft tissue, but none of them could make a person look or function as if nothing ever happened to them – and that’s always our goal.”

In response to this problem, Dr. Fritz developed a new variation of an established surgery which uses a transplant of bone (fibula) and soft tissue from the leg in a layered fashion. “This technique has hugely improved outcomes for our patients,” he says. “Now, with the layered fibula technique, I’m able to fix not only the cosmetic issues, but also give the patient back the ability to eat and talk. And because It’s a transplant using the patient’s own tissue, there’s no risk of rejection.”

While Dr. Burkey was removing her cancer, Dr. Fritz was busy removing part of the fibula bone from Cheryl’s leg, along with some of overlying skin and soft tissue. “The bone we remove supports just five percent of a person’s weight so it’s a very forgiving place to obtain what we need,” says Dr. Fritz. 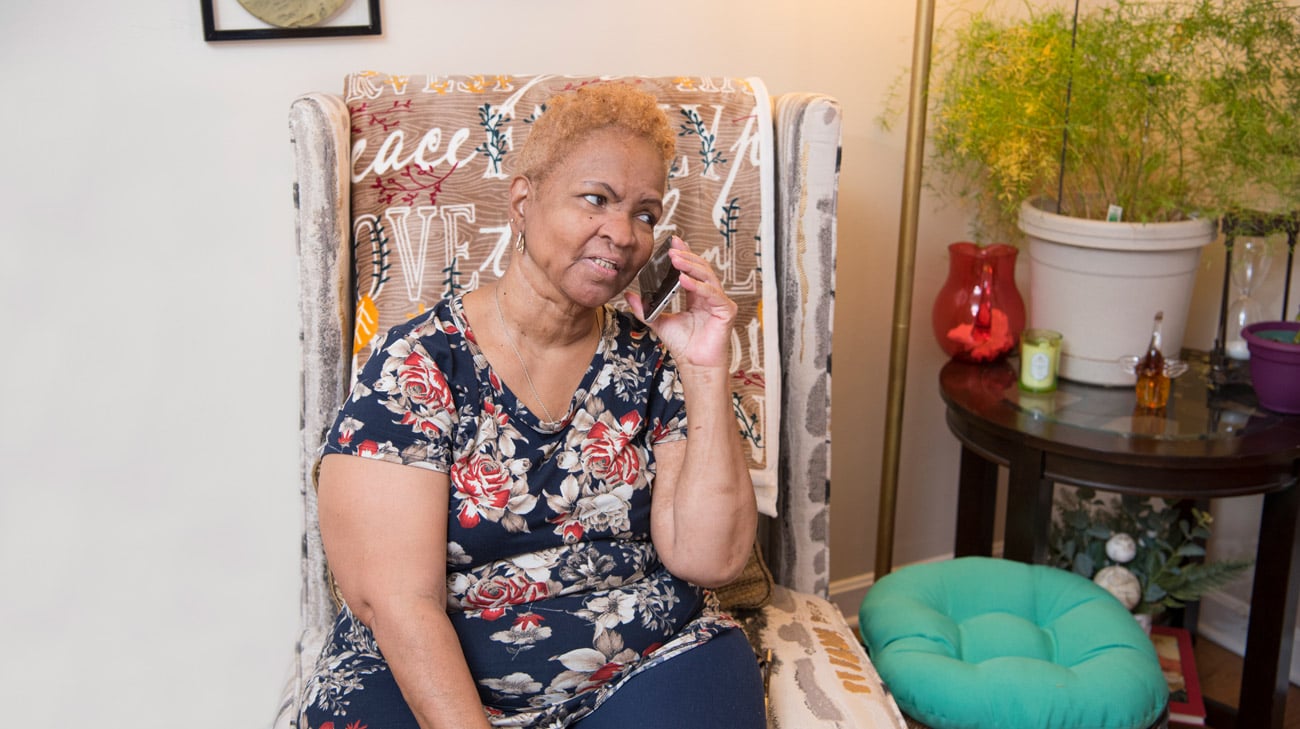 Cheryl's quality of life has greatly improved, now that she has full use of her mouth again to speak to friends and family. (Courtesy: Cleveland Clinic)

Once removed, the bone is cut into multiple segments, while making sure to preserve the blood supply to all of the tissue. The upper bone segments restore support for the eye and shape to the midface and eye socket; the lower segments rebuild the palate and provide a foundation for future dental restoration. The vessels that supply blood to the bone are then connected to blood vessels in the upper neck or face.

While Cheryl’s palate cancer was removed in 2011, follow-up radiation treatment was delayed due to a breast cancer diagnosis. “It was a double whammy,” says Cheryl. “But thanks to the grace of God and my great doctors, I’m cancer free.”

Once she completed radiation for her breast cancer, Cheryl underwent additional radiation treatment on her face and neck. She experienced some difficulties and underwent hyperbaric oxygen treatment to speed the healing process along.

“At this point, Cheryl had her face back, but her speech was not clear, and she was limited to a soft, largely liquid diet,” says Dr. Fritz. “We did additional minor surgery to help her overcome these issues.”

Salvatore Esposito, DMD, FICD, a prosthodontist, is the past Chairman of the Department of Dentistry, Oral Surgery & Maxillofacial Prosthetics at Cleveland Clinic. He continues to work in tandem with Cleveland Clinic surgeons including Drs. Burkey and Fritz as part of his private practice.

“Despite all the reconstruction done by Dr. Fritz, Cheryl was left with only a few of her natural teeth which significantly affected her appearance and her ability to speak and eat,” says Dr. Esposito. “My job is to fix that.”

For Cheryl, Dr. Esposito designed an intraoral prosthesis — like a dental retainer with no front wire — that could be held in place by her remaining natural teeth.

“With the prosthetic in place, Cheryl was able to once again speak intelligibly and chew,” says Dr. Esposito. “The bone reconstruction of her face and eye helped Cheryl maintain normal appearance and function, so after her teeth were finally restored, she was able to feel whole again.”

“Despite missing nearly half of the bony and soft tissue structure of her right cheek and palate, people would be hard-pressed to see that anything has been done – and that’s our goal,” adds Dr. Fritz.

It was a long and difficult journey, through which Cheryl had the support of her immediate family, as well her doctors, whom she considers her second family.

“The doctors were great, and very patient with me. I did everything they told me to do to keep my strength up and take care of my mouth. It was a few years before I was fully healed and could actually chew food again, but they were there with me through all the steps,” says Cheryl. “They kept me going.”