Chris and Vicki Barbaro always knew they wanted a house full of kids, but after four years of disappointing results, the Lorain couple decided to try in vitro fertilization. “I got pregnant the month we decided to do it. We couldn't have been more surprised,” says Vicki.

Being pregnant at age 39 brought about some complications. After a medical scare at 27 weeks in her pregnancy, Vicki was required to be on bed rest at Cleveland Clinic Fairview Hospital. At 32 weeks — on December 3, 2012 — doctors delivered Caiden Alexander Barbaro by emergency C-section and he was immediately whisked away. “I remember looking at Caiden and thinking he was so tiny. I assumed it was because he was born eight weeks early,” says Vicki.

Vicki’s obstetrician said Caiden had issues with his lungs. After an in-depth medical assessment, it was determined that Caiden had a rare, chronic lung disease. “Caiden had a bell-shaped chest cavity that kept his lungs from expanding,” explains Chris. “It’s an extremely rare condition that happens without reason.”

Caiden had yet another diagnosis on the horizon. Six weeks after his birth, a geneticist confirmed that he was born with achondroplasia, the most common form of dwarfism.

The couple took the diagnosis differently. Vicki worried about Caiden’s future and if kids would tease him. Chris read everything he could find on the subject to educate himself. “I’m the band director at Marion L. Steele High School in Amherst, so I want music to be a part of Caiden’s life. I was thinking about how I could fashion a special stool so that Caiden could play the marimba in the front ensemble,” reminisces Chris.

Caiden spent seven months in the Neonatal Intensive Care Unit (NICU) and was then transferred to Cleveland Clinic Children’s Hospital for Rehabilitation. There, he was supervised 24/7 by medical specialists for five months. 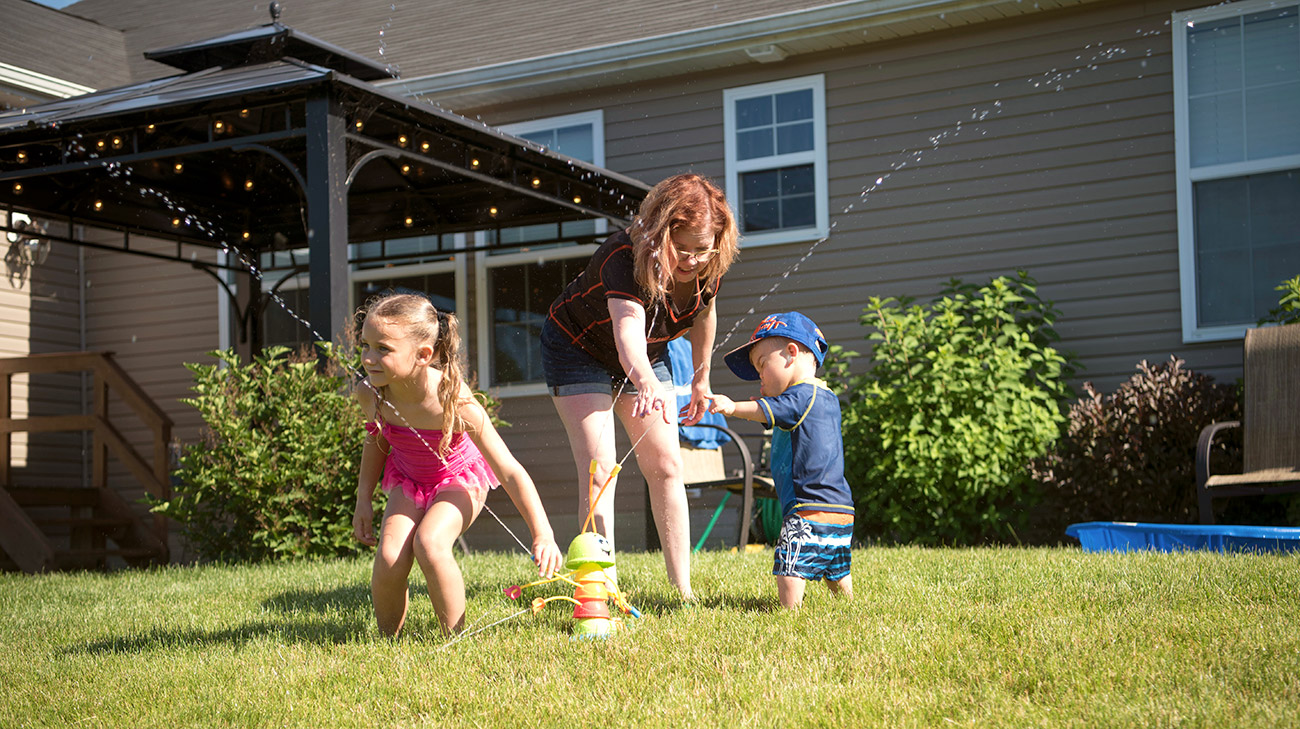 Vicky Barbaro joins in the fun as Caiden and a friend play in the sprinkler.

Caiden was a fighter, but he was also delicate because of his multiple medical issues. Serious medical issues seemed to follow one right after the other — congestive heart failure, spine surgery and an autism diagnosis. Caiden also needed to have a tracheostomy (or trach for short) — a surgically created hole in the front of the neck to create a direct airway to the trachea (windpipe). A tracheostomy tube (breathing tube) would be attached to the trach and connect to a ventilator. This allowed him to take in bigger breaths to inflate his lungs, oxygenate his blood and help him breathe.

In December 2013, one year and one week after he was born, Caiden was well enough to go home. “We were so happy to have him leave the hospital and finally come home. We learned how to care for his tracheostomy and ventilator needs,” says Vicki.

Part of caring for his trach and ventilator on their own required the Barbaros to always be prepared in case something malfunctioned or detached from Caiden. Chris says, “No matter where we went, Vicki and I would leave the house with multiple bags and backpacks filled with supplies in case we needed to do an emergency trach kit change or the ventilator failed. We had a trach bag, an Ambu bag (manual resuscitator) with a breathing mask, oxygen tanks, extra batteries and a plethora of extra supplies for whatever might come up. It was cumbersome, but necessary for Caiden’s health.”

But being home didn’t mean that Caiden’s medical issues were over. He also had a multitude of issues in his head and neck area — causing difficulty breathing and hearing. Caiden began to see Brandon Hopkins, MD, a pediatric otolaryngologist (ear, nose and throat specialist) at Cleveland Clinic. “Caiden’s shrouded with a lot of medical issues that he doesn't know he has,” says Dr. Hopkins.

Under Dr. Hopkins’ care came a turning point for Caiden. Dr. Hopkins inserted tubes in both of Caiden’s ears, which helped him hear. “That was life changing. I love seeing Caiden come running into the living room when he hears Mickey Mouse on TV,” says Vicki. 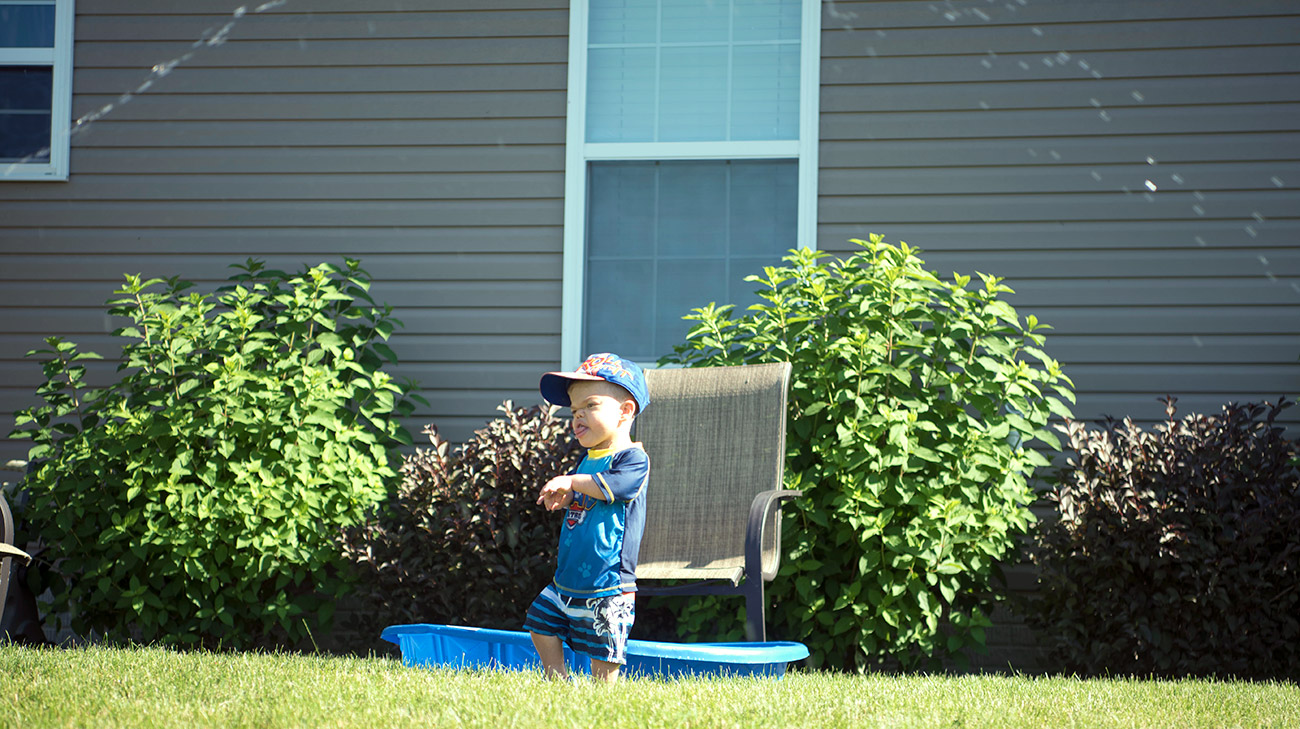 Now that Caiden’s trach has been removed, he is free to run and play and jump in the pool.

Dr. Hopkins had another goal in mind for Caiden — permanently removing his tracheotomy. Removing it would enable Caiden to breathe on his own and not be tied down to a machine. Dr. Hopkins says, “Annie Banas, John Carl, Lisa Feinberg and many other PCAVS caregivers and I were part of Caiden’s medical team who worked together to develop a plan for Caiden with the ultimate goal of removing his trach. I just wanted to try and remove impediments in his life so he could run, play and even jump in a pool.”

In order for Caiden to breathe without help from his trach, he’d have to have his tonsils and adenoids removed to create more room for air to pass.

“Dr. Hopkins is an optimist who was always ready to move forward,” says Vicki. “I have a lot of trust in him and see that he truly cares about Caiden.”

So, in June 2019, when Dr. Hopkins said Caiden was ready for his decannulation (trach removal), the Barbaro family was excited. And, while it was the most momentous of all of the medical procedures that Caiden had had to that point, it was also the easiest.

“Dr. Hopkins pushed Caiden to grow and is part of the reason why Caiden had his trach removed,” says Chris. “Cleveland Clinic was always there, even at the toughest times, to help us get through anything. He’s not just a number at Cleveland Clinic, he’s a special person there.”

Caiden isn’t tied down now. “Whenever we left the house, we had a long list of items we needed to bring with us,” says Vicki. “Now all we do is just hold his hand.”

Learn more about the about the Pediatric Center for Airway, Voice and Swallowing (PCAVS)