By Her Father’s Grace, Mom of Three Has a New Kidney 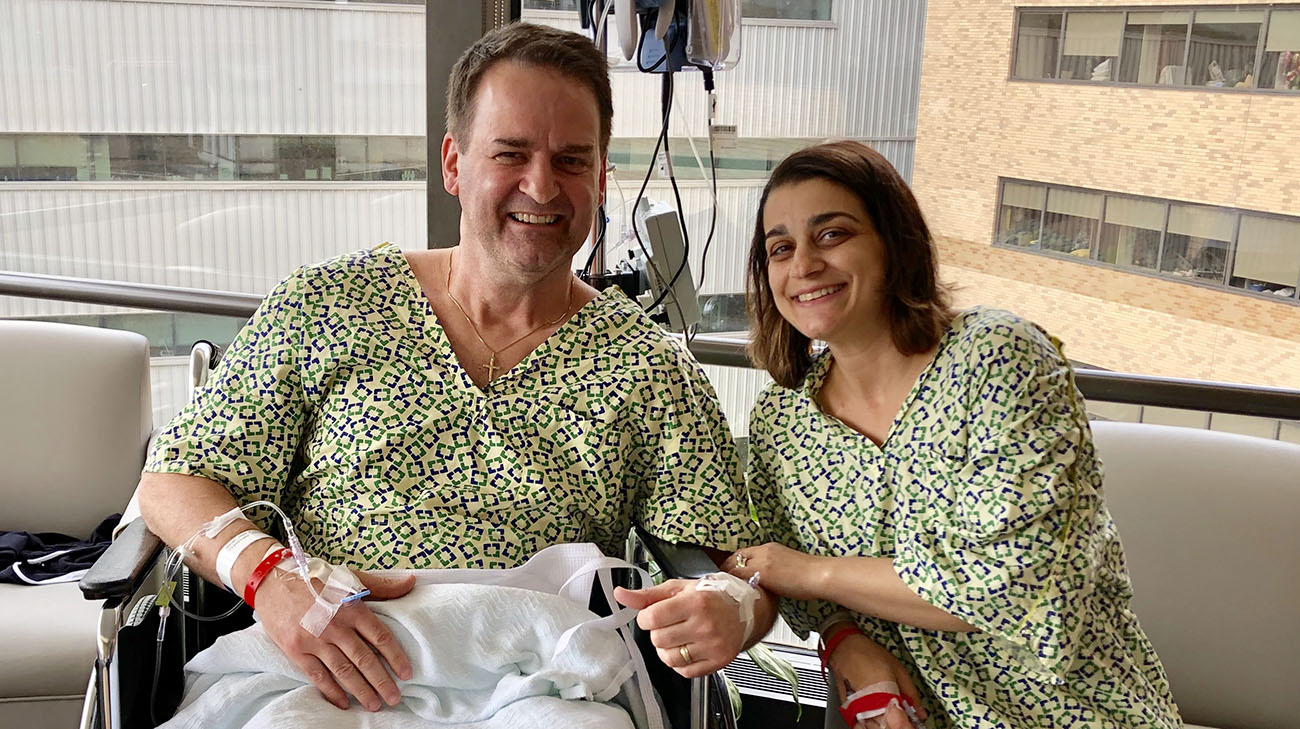 Father’s Day came early this year for Jim Whalen. And the best gift was one he gave in late April: a healthy kidney to his daughter, Amanda Egli.

“Dr. Wee called me ‘father of the year,’ but I don’t feel that way. What father, if in good health, wouldn’t give his kidney to his child?” says Jim, 61, a North Canton resident. “We’ve always had a close relationship, but now our bond is even deeper.”

Jim donated a kidney to his daughter, Amanda, who has a disease that causes scarring in the kidneys. (Courtesy: Amanda Egli)

Amanda required a kidney transplant due to complications from focal segmental glomerulosclerosis (FSGS), a disease that causes scarring in the kidneys due to high levels of protein and other factors. A progressive condition, it can lead to kidney failure – and even death. In fact, Amanda’s mother, aunt and uncle all died from FSGS.

Dr. Alvin Wee, MD, a urologist and surgeon within Cleveland Clinic's Kidney Transplant Program, who performed Amanda’s operation, says he was deeply moved by Jim’s desire to do anything to help his daughter.

“Jim was trying to do everything he possibly can to prevent his daughter from going to dialysis. His love for his daughter was truly unconditional,” adds Dr. Wee.

While siblings are typically the best match for a kidney transplant, parents usually aren’t, especially fathers. After a nerve-wracking three week wait, the lab results from his initial blood test came back. Jim and Amanda matched perfectly on all six of the antigens (cell proteins) that are the most important determinants for successful organ transplants.

Amanda, 34, was diagnosed with FSGS 12 years ago, and moved quickly to try and delay the onset of the progressive disease. She hired a personal trainer and was careful about what she ate. Not knowing when the disease may manifest, she started a family right away. Her three children are ages 10, 9 and 7. “I knew that the healthier you ate and the more active you were, the more it would help,” adds Amanda, who expects to return to work as a preschool teacher’s aide in August. “But it was inevitable it was going to happen sooner or later.”

Two years ago, Amanda’s levels of creatinine, a chemical waste product, began to spike. It’s a sure sign the disease was progressing. As her health slowly deteriorated, Jim mentioned he would like to donate a kidney to her, but they both realized it was a long shot.

“For some reason, though, I always felt I would be the one to transplant to her,” recalls Jim. “The fact that I was a parent and a perfect match just proves it was meant to be.”

If not for Jim, Amanda would likely have had to endure a long wait for a kidney. According to statistics from the National Kidney Foundation, more than 100,000 people are waiting for a kidney transplant and the median wait time is 3.6 years.

Leading up to the transplant, Amanda was on dialysis three times a week for two months. She recalls “feeling defeated” that her condition had deteriorated so substantially despite her best efforts.

“I saw my mom on dialysis for over 10 years, and I couldn’t imagine doing that,” she says. “I have three young kids. I knew I just had to get a kidney.”

When Jim found out he was a match, he was elated. However, he also worried the transplant might not ultimately succeed: “I’m a little older than the age range for donors. But the doctors assured me we’d be fine.” 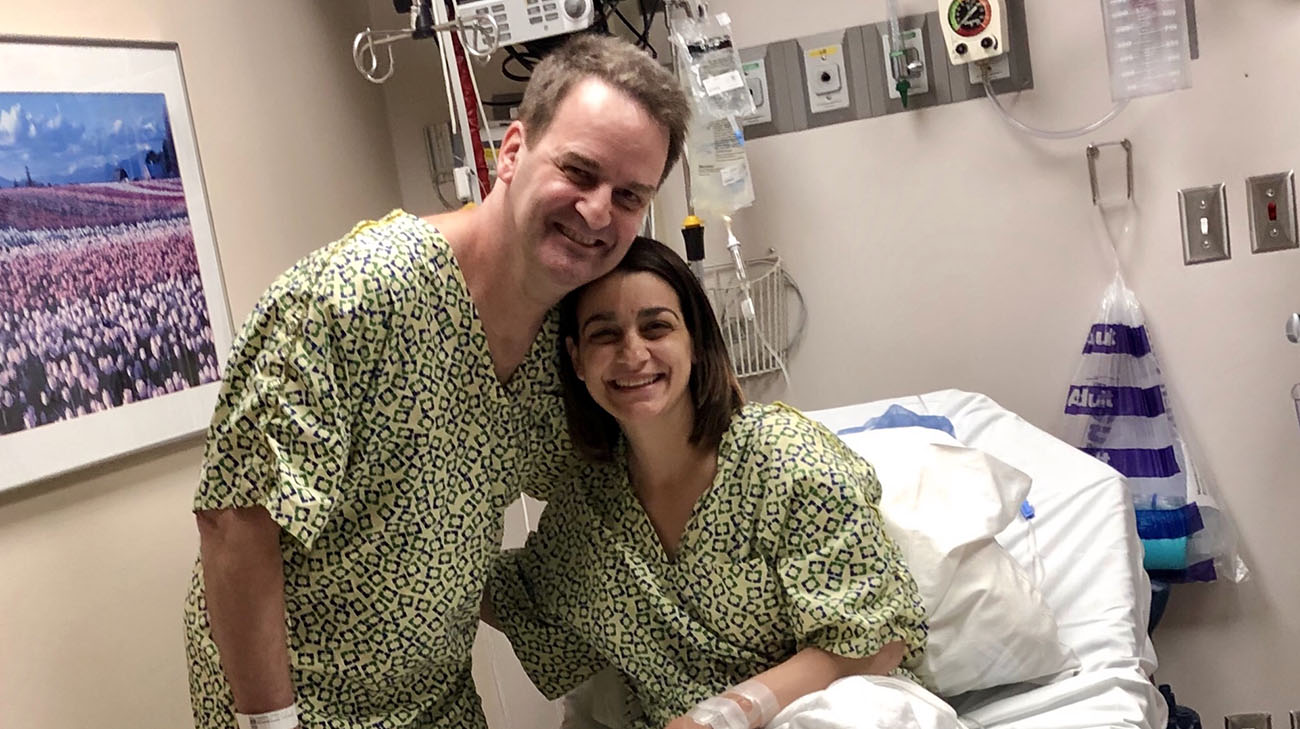 The day of surgery, Jim and Amanda met in pre-op for a final hug. When he was whisked away to the operating room, his daughter began to cry. “I asked her later, ‘Why were you crying?’ And she said she was worried about what might happen to me.’”

Both operations were a success. Jim says, other than some minor pain around the small incisions made to remove the kidney laparoscopically, the operation and recovery have been a breeze. He returned to work just a few weeks after surgery.

Amanda’s recovery will take longer, but she immediately noticed a difference when she awakened post-op.

“I just felt so good. I realized that I hadn’t known how bad I was feeling before the transplant,” she explains. “Oh my gosh, what a difference! I have so much energy now.” 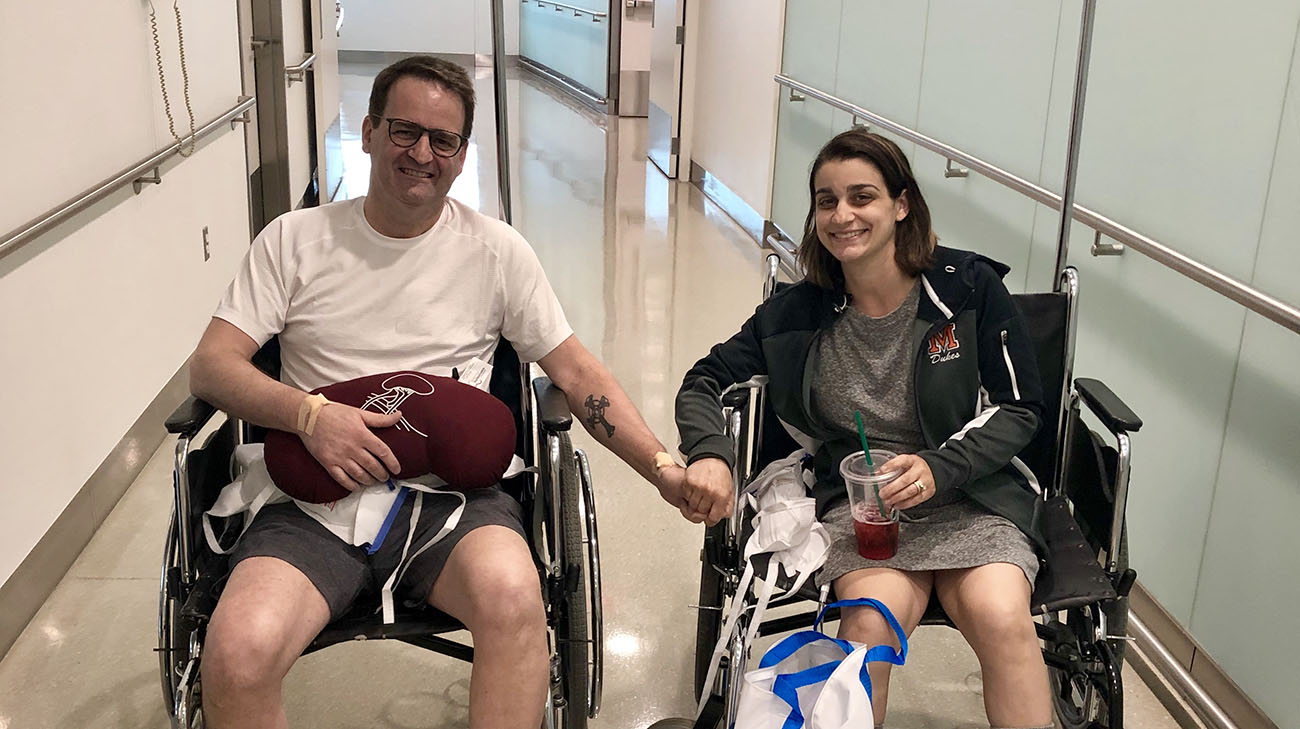 Jim and Amanda hold hands as they get ready to be discharged from Cleveland Clinic. (Courtesy: Amanda Egli)

Amanda named her new kidney Grace, since it was by her father’s grace her life was saved. Not happy that his “old” kidney has a woman’s name, Jim jokingly named his remaining kidney Zeus, “which is much more manly.”

A day after their surgeries, father and daughter reunited – amid hugs and tears. Jim was surprised and delighted that Amanda already noticed an improvement in how she felt.

“It was a surreal moment,” he recalls. “That’s my daughter, and she has one of my kidneys. No matter how old they are, you always want to help your kids.”