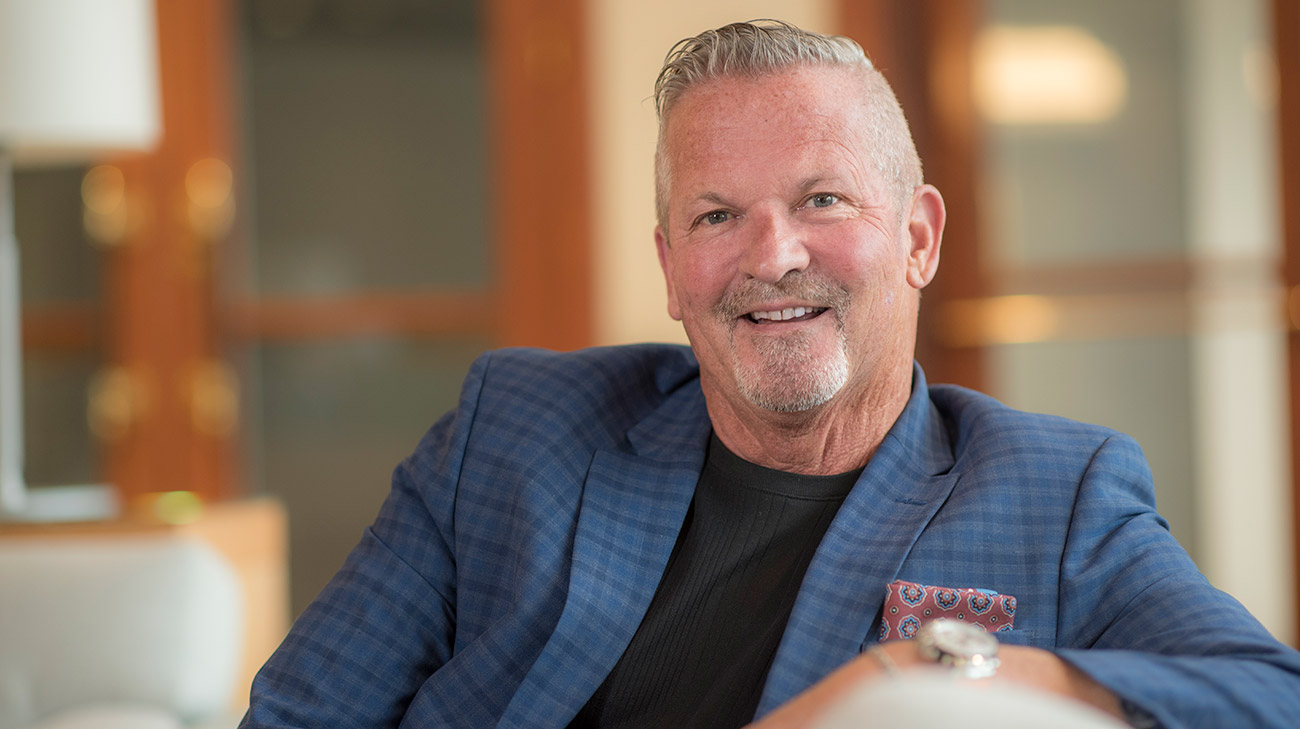 Tim Bentley thought things were bad enough when he was diagnosed with metastatic throat cancer (squamous cell carcinoma) on his 50th birthday back in 2008. “I got the gift that keeps on giving,” he says. “I didn’t have many symptoms, just a lump I thought was swollen gland or a problem related to a root canal.”

Tim travels to clinical meetings around the country for his job. At one of those, a physician friend noticed the lump and told him to have it checked.

Doctors diagnosed the cancer, which led to the removal of Tim’s tonsils and adenoids. The cancer had also spread to some lymph nodes. Tim had radiation treatment on his head and neck twice a day for eight weeks, followed by weekly chemotherapy.

He finished treatment and – while the cancer was gone – he was told that there was a possibility of complications down the road as a result of the radiation.

Fast forward to late 2017. During a routine dental cleaning, Tim complained about some pain by his left molars, and the hygienist noticed exposed bone. Tim was referred to an oral surgeon who would inform him that his jaw bone was dying, rotting away from osteoradionecrosis.

“That’s when the fun began,” says Tim. “The standard of care was to undergo hyperbaric oxygen treatment for the damage to the bone, then remove the teeth and damaged bone.”

Hyperbaric oxygen therapy has been used for decades to treat chronic wounds and other medical conditions. It provides the patient with air that contains 100 percent oxygen in a special pressurized chamber, allowing the lungs to absorb greater amounts of oxygen.

The next step would be drastic. The oral surgeon recommended a fibula free flap – a piece of the fibula bone in Tim’s leg would be removed and used to replace the damaged bone in his jaw.

With surgery scheduled for January 2018, Tim missed a business trip. His boss, who went to the conference in his place, ran into Kenneth Tomecki, MD, Vice Chairman of the Department of Dermatology at Cleveland Clinic.

“Dr. Tomecki asked where I was, and my boss explained that I was home in Florida preparing to have free flap surgery,” says Tim. “Dr. Tomecki said he didn’t want to interfere, but he felt that I needed to come see Michael Fritz, a Cleveland Clinic doctor who has pioneered a new surgery to treat osteoradionecrosis.”

“The atmosphere of collaboration at Cleveland Clinic is not replicated in other places. The people here are unbelievable; they are always thinking about what is best for the patient. I love taking care of people and being innovative in how I can help them. The teamwork and success at Cleveland Clinic make that innovation possible.”

“There was no blood getting to Tim’s jaw area, so the bone could not heal. He still appeared to have enough good bone to work with, so we felt he was a candidate for a new technique that I developed,” says Dr. Fritz, who is board-certified in both facial plastic and reconstructive surgery and otolaryngology.

Prior to coming to Cleveland Clinic for this new procedure – anterolateral thigh fascia lata rescue flap surgery – Tim collapsed on a Delta flight.

“My left carotid artery collapsed – another complication from the radiation treatment,” says Tim. “This happened right before takeoff, so I was taken from the plane to the hospital where I had surgery to insert a stent to open the artery.”

Finally, in June 2018, Tim was ready for a “week-and-a-half vacation” at Cleveland Clinic for surgery with Dr. Fritz.

According to Dr. Fritz, his technique – which is currently done only at Cleveland Clinic – has many benefits. These include better outcomes, faster recovery and lower costs.

“Traditional free flap surgery is a big operation that requires a seven-to-ten-day hospital stay. Following surgery, the patient has to have a tracheostomy and feeding tube,” he says. “Because of long-term scarring and infection and the amount of tissue removal required, it can leave the patient disfigured and affect functions like chewing, swallowing and speech. As a result, we traditionally put this operation off until the jawbone was completely destroyed. There was no intermediate solution for someone with persistent problems after failing HBO treatment who still had good mandible bone present. The rescue flap fills this void.”

Dr. Fritz compares his technique to a heart bypass, but on the jaw. He uses a small piece of healthy fascia (thin tissue overlying the muscle) and a skin graft from the patient’s quadricep/thigh area to transplant a new blood supply and a covering for the jaw after the unhealthy bone is removed. If needed, an additional small bone graft from the hip is included. “The difference is, this procedure lasts 4-5 hours, people can walk and eat right away, and they usually leave the hospital within a day or two,” he says.

“My surgery took 4 hours and 19 minutes. I spent just two days in the hospital, then a few more at the hotel until Dr. Fritz removed the surgical drains,” says Tim. “Within a week, I was back home. You can’t tell I had surgery at all. No one believes me unless I show them my thigh.”

Dr. Fritz’s groundbreaking procedure to treat osteoradionecrosis of the mandible/jaw has a 98% success rate in patients who have sufficient healthy bone to qualify. While Tim is one of just 26 patients at Cleveland Clinic who have undergone this procedure, surgeons at Cleveland Clinic are applying the same concept to treat patients with necrosis resulting from the treatment of other types of head and neck cancer.

“The atmosphere of collaboration at Cleveland Clinic is not replicated in other places. The people here are unbelievable; they are always thinking about what is best for the patient,” says Dr. Fritz. “I love taking care of people and being innovative in how I can help them. The teamwork and success at Cleveland Clinic make that innovation possible.”