Dr. Marco Valdivia, a plastic surgeon, and his wife, Margarita, found their hearts overflowing with love and excitement when they learned they were having a baby. The family of two — that lives in Lima, Peru — was expanding to three­. This was a dream come true for Mrs. Valdivia, whose family lives half a world away in her native country, Belarus. She literally was counting the days until the arrival of her little prince.

During an appointment at her fifth month of pregnancy, Mrs. Valdivia’s physician grew concerned. After some testing, the couple found out that their baby had issues with his heart. It wasn’t until about a month after baby Marco was born that they realized exactly how serious the heart complications were.

Marco wasn’t able to receive the cardiac care he needed in Peru. So, Dr. Valdivia scoured the internet to research where his son could receive the finest care possible. “As a doctor myself, I looked for the best medical solution I could offer my baby,” recalls Dr. Valdivia.

Cleveland Clinic provided the specialized cardiac care his son needed, so he contacted the hospital. Once the Valdivias were in touch with Cleveland Clinic, everything went very fast. “It was incredible how quickly we got a response from the team at Cleveland Clinic. In a matter of five days, all of the documents were ready for us to travel to Cleveland,” remembers Dr. Valdivia.

“We were part of one big family at Cleveland Clinic. They treated my baby with so much care and love. Marco was in such good hands with Dr. Najm — he was the one who saved his life. But, it was also because of all of the caregivers that our experience at Cleveland Clinic was wonderful.”

Because the Valdivia family was from Peru — a Spanish-speaking country — and would be in Cleveland for an extended amount of time, they were connected with Cleveland Clinic's Global Patient Services (GPS). GPS is dedicated to serving not only the medical but also the cultural and language needs of international patients in order to make their stay in Cleveland as comfortable as possible.

“Being able to communicate in their native tongue makes it easier for international patients to navigate through a very complex facility like Cleveland Clinic,” says Nizar Zein, MD, Chairman, Global Patient Services. “The caregivers in our department can also help families to make Cleveland their home while they’re here for treatment and assist with any cultural needs our patients and their families have.

Since, Mrs. Valdivia’s mother-tongue is Russian and the language she was most comfortable speaking, she had an interpreter who spoke Russian. “The translators were amazing and helped me get answers to any questions I had about my son’s medical care,” says Mrs. Valdivia. And when her husband, a native Spanish speaker, was with her, the couple had a Spanish-speaking interpreter.

Due to the stress of the trip, Marco’s health worsened when he got to Cleveland. He was scheduled to have life-saving heart surgery within two days of arriving at Cleveland Clinic.

Marco was born with a rare and severe congenital heart anomaly called an atrial ventricular canal defect. “Normally, there are two valves in the heart. He only had one large heart valve. Marco also had a narrowing of pulmonary arteries. He had very little blood going to his lungs. As a result, the oxygen going to his body was very low, which caused a great deal of blue blood in his systemic circulation and gave him a blue color,” explains Elizabeth Saarel, MD, Chair of Cleveland Clinic Children's Pediatric Cardiology department. 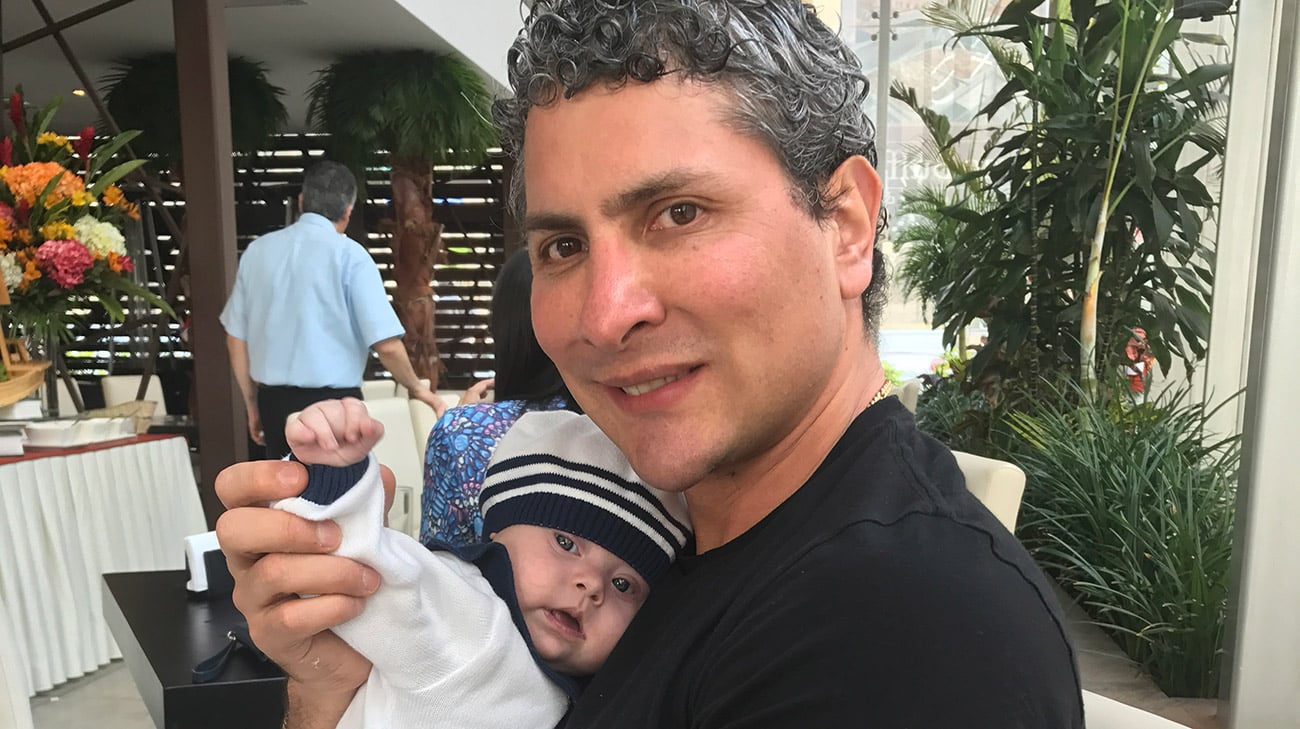 Father, Dr. Marco Valdivia, and his son who is now happy and healthy.

An hour before surgery, Marco went into cardiac arrest and stopped breathing. “In the blink of an eye, there was a complete medical team around my baby, hooking up machines to him to measure his pulse, blood pressure, dioxides — everything to make sure nothing was overlooked. A physician performed CPR by massaging his heart to get it beating again,” recalls Dr. Valdivia.

Marco was rushed to the operating room and placed on a cardiopulmonary bypass machine — a machine that takes over for the heart by replacing the heart’s pumping action and adding oxygen to the blood ­— to keep him alive during surgery.

“During the operation, I addressed both of Marco’s issues. I created a division in his heart valve to make two valves and the pulmonary valve was enlarged to allow for normal blood circulation,“ explains Hani Najm, MD, Chair, Pediatric and Congenital Heart Surgery at Cleveland Clinic Children’s.

Marco had an amazing and quick recovery. He was no longer blue, he held his head up, and his eating and feeding habits improved. “Marco is the prince of our house. And now, the prince is happy and healthy,” beams Mrs. Valdivia.

When Marco gets older, he’ll have to have another heart surgery. But, for now, his heart is strong and functioning as it should. His congenital defect is unnoticeable.

“We were part of one big family at Cleveland Clinic. They treated my baby with so much care and love. Marco was in such good hands with Dr. Najm — he was the one who saved his life. But, it was also because of all of the caregivers that our experience at Cleveland Clinic was wonderful,” says Mrs. Valdivia.