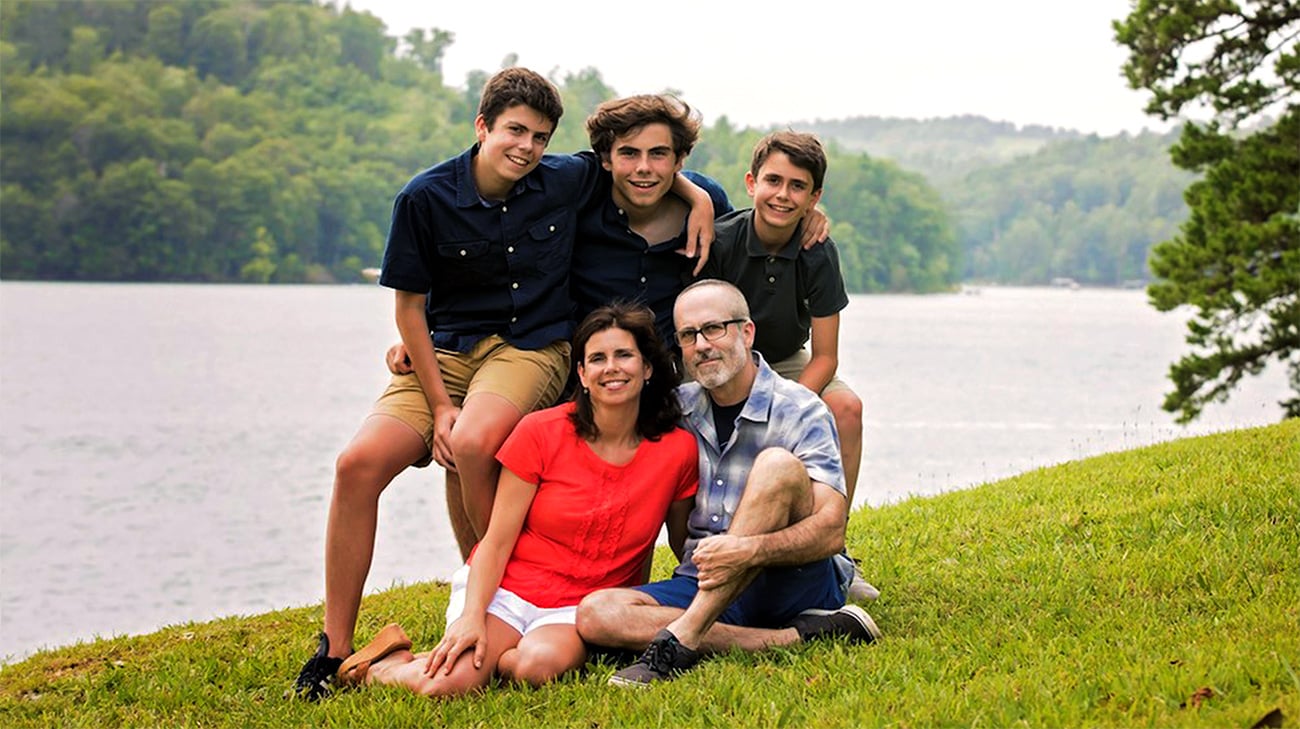 In late 2016, Jeff Tabor was busy at work and stressed out. He was having difficulty finding the right words at times. And in some situations, he couldn’t make a simple decision — like what to order from a restaurant menu.

Holiday festivities were also challenging. Jeff felt like he wasn’t engaged. When friends began arriving for a New Year’s Eve dinner party, all Jeff could say was that he really couldn’t say anything — his mind was blank.

With two business trips planned in early January, Jeff continued to struggle. He thought it was just an emotional issue related to stress. He called his primary care physician, who he likes and trusts.

“My wife Cynthia and I went to the appointment together. They conducted some verbal tests. Based on how miserably I failed at those, they sent me for an emergency MRI,” says Jeff. “The MRI showed a golf ball-sized tumor in the front left of my brain. So that’s how it all began.”

Jeff was diagnosed with glioblastoma (GBM), the most common primary tumor of the brain. And despite all the advances in surgery, radiation and chemotherapy, the prognosis was not good. On average, glioblastoma patients survive only 15 to 16 months with standard treatment. Jeff underwent six weeks of radiation before beginning the clinical trial. He says his wife, Cynthia, has been an amazing support throughout his journey. (Courtesy: Jeff Tabor)

After most of the tumor was removed with resection surgery at his local hospital in Pittsburgh, Jeff almost immediately felt better. But he still required additional treatment. Surgeons strive to remove as much of the tumor as possible, but removing too much could mean possible complications, including paralysis. Because of this, patients need radiation and chemotherapy following surgery.

From there, the next step is to apply to participate in a clinical trial — and hope to be accepted.

“At this point, you are kind of on your own, because clinical trials are offered across the country. But I had a plan. Cleveland Clinic has a great reputation — I’d heard about famous people going there for cancer treatment, and I’d heard about a specific trial I thought could help me. My plan was to participate in a clinical trial at Cleveland Clinic with Dr. Ahluwalia,” says Jeff.

According to Manmeet Ahluwalia, MD, who specializes in the treatment of patients with brain tumors and brain metastases at Cleveland Clinic’s Rose Ella Burkhardt Brain Tumor & Neuro-Oncology Center, clinical trials offer innovative options for treatment to patients with bad cancers or tumors like glioblastoma.

“In a normal human body, every cell is designed to function a specific way. After a certain period, that cell undergoes what we call programmed cell death. Cancer cells have characteristics within them that help them prevent or escape the cell death,” says Dr. Ahluwalia. “In Jeff’s case, we evaluated his tumor for the presence of Survivin, a protein that can help cancer cells not only grow, but grow faster.”

Along with meeting other requirements for the clinical trial, test results were positive for Survivin. Jeff was entered into the clinical trial where, in addition to further chemotherapy, he would receive ongoing doses of SurVaxM — a first-of-its-kind immunotherapy engineered to stimulate patients’ immune response to control tumor growth and recurrence.

“This vaccine is unique to this particular trial, and all the stars aligned for me to get accepted into it,” says Jeff. He travels to Cleveland Clinic with his wife to receive the treatment and periodic MRIs to gauge the results. Initially, he made the two-and-a-half-hour trip every two weeks; now, it is every 10 to 12 weeks.

SurVaxM stimulates the immune system to kill tumor cells that contain Survivin. Preliminary results of the first 55 patients enrolled in the clinical trial (including Jeff) reveal a 12-month overall survival rate of 90.9 percent from diagnosis and 70.8 percent from first immunization. This is a vast improvement over traditional treatment alone.

“While we’re still in the relatively early phases of testing this vaccine, we are seeing some promising results,” says Dr. Ahluwalia. “Jeff’s has gone almost 18 months from diagnosis, and his recent MRI scans do not show any evidence of cancer growing back in his brain.”

Dr. Ahluwalia also credits Jeff for taking good care of his overall health. Now back to work, Jeff’s family life with his wife and three sons is also back to normal, and he accepts the ongoing vaccines that are part of the clinical trial as his new normal.

“If you had told me I would feel this good a year ago, I wouldn’t have believed you,” says Jeff. “Every day has been better than the previous day.”