Superior canal dehiscence is an opening in the bone that covers the superior semicircular canal of the inner ear. It can cause trouble with a person's balance and hearing.
Superior Canal Dehiscence (SCD)

What is superior canal dehiscence (SCD)?

Canal dehiscence refers to an opening (dehiscence) in the bone that covers one of the semicircular canals of the inner ear. It most commonly occurs in the superior semicircular canal of the ear. It can result in symptoms that affect a person's balance and hearing. 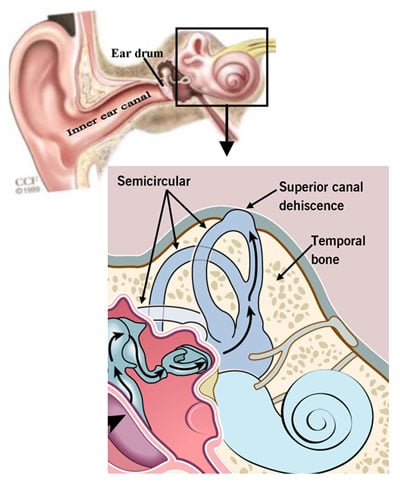 The true cause of canal dehiscence syndrome is unknown. The dehiscence may, at least in part, be congenital (present from birth) and may have occurred during the development of the inner ear. It can also be caused from certain infections as well as head trauma. Many believe that it is multifactorial in that there may be a congenitally thin area of bone that is then susceptible to trauma or infections, or may simply thin further with aging.

It is estimated that approximately 1 to 2% of the general population has abnormally thin bone covering their superior semicircular canal. The average age for diagnosis of superior canal dehiscence is approximately 45 years old. Approximately 33% of patients diagnosed will have superior canal dehiscence in each ear. Many people will have thin or dehiscent bone on scans, but no symptoms at all of SCD syndrome. Interestingly, some individuals with only thin bones on scans may present with the same symptoms as some with true dehiscence.

What are the symptoms of superior canal dehiscence (SCD)?

Symptoms of superior canal dehiscence can include:

Although it may not be directly related, it is not uncommon to also have a headache with this condition.

The vertigo and oscillopsia commonly associated with canal dehiscence can be triggered by common activities that change the pressure in the brain or the middle ear, and by exposure to loud sounds. These activities include straining, coughing, sneezing, heavy lifting, exercising, and listening to loud noises.

Not all patients will expereince all of the symptoms, which can make the diagnosis difficult and can alter the treatment recommendations.

A thorough case history will be performed so the physician better understands the symptoms that the patient is experiencing. The physician may order several tests to assist in the diagnosis of superior canal dehiscence. These tests can include a CT scan of the temporal bone, which can show the opening in the bone covering the superior semicircular canal. Your physician may also order a test from an audiologist (a hearing test), more complete balance testing, and a vestibular evoked myogenic potential (VEMP) test.

A VEMP is a painless test. First, electrodes are taped to the skin of one side of a patient's neck, or around the eyes. Next, sound is introduced into one ear and the response is measured from muscles of the neck or eyes. Patients with SCD show increased sensitivity to sound as measured by the response of the muscles. The test helps identify the specific site of the injury to the inner ear, which can help determine the cause of SCD.

What are the treatment options for superior canal dehiscence (SCD)?

Most patients with superior canal dehiscence can cope with their symptoms. They learn to avoid activities that cause the vertigo and oscillopsia. Seeking treatment from a certified vestibular physical therapist can be beneficial. They can provide patients with exercises to help improve balance and reduce fall risk. In addition, patients often will avoid loud activities such as concerts. In some circumstances, using hearing protection can be very helpful if louder noise is expected during activities. Some patients who have dehiscence noted on scans but have no symptoms, will not require any treatment at all.

For some patients, the symptoms of SCD are much more severe and can interfere with daily living. For those patients, plugging of the dehiscence through surgical repair may be necessary.

Plugging the dehiscence has been shown to decrease or provide relief from the symptoms of SCD. There are several approaches for treatment depending on the severity of symptoms, type of symptoms, and the presence of any other medical conditions. The most common treatment options are: