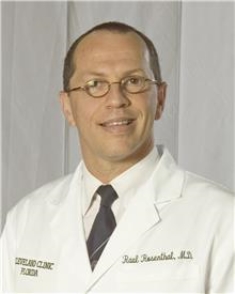 Dr. Raul Rosenthal is an industry leader, prolific author, medical researcher and attending surgeon at Cleveland Clinic Florida, where he has conducted well over 10,000 general surgery and bariatric procedures and trained more than 50 fellows in advanced gastrointestinal, minimally invasive and bariatric surgery.

In 2018, Dr. Rosenthal received the LEAD Award from the American Society of Metabolic & Bariatric Surgery (ASMBS) Foundation in recognition of lifetime contributions to the field of bariatric surgery. Also in 2018, his breakthrough research into the use of indocyanine green fluorescence imaging in laparoscopic cholecystectomy was featured during the American College of Surgeons annual Clinical Congress.

Based on the results of Dr. Rosenthal’s multinational, multi-year trial, the use of fluorescence imaging is becoming established as the gold standard of care for minimally-invasive gall bladder removal and other abdominal procedures worldwide.

Dr. Rosenthal completed his medical school and surgical residency in Rosario, Argentina. In 1982, after emigrating to Frankfurt, Germany and repeating a general surgery residency, he became an attending surgeon at the Northwest Hospital. In 1993, Dr. Rosenthal emigrated to the USA, where three years of minimally invasive surgery fellowship at Cedars Sinai Medical Center in LA were followed by a third general surgery residency at Mount Sinai Medical Center in New York City.

After arriving at Cleveland Clinic Florida, Dr. Rosenthal became Chief of Minimally Invasive and Bariatric Surgery and director of the Fellowship program. He has subsequently served as Chief of the Medical Staff, Chairman of the Department of General Surgery, Director of the General Surgery Residency Program and Chairman of the Medical Executive Committee.

Dr. Rosenthal is founding Clinical Editor of Bariatric Times and Associate Editor of SOARD and Obesity Surgery. He serves on the Editorial Board member of Annals of Surgery, Selected Readings in General Surgery Langenbeck’s Archives of Surgery, and Surgical Endoscopy. He is founding member and a past President of the Fellowship Council and also served as President of the South Florida Chapter of the American College of Surgeons and Governor of the American College of Surgeons.

A polyglot, Dr. Rosenthal is fluent in English, Spanish and German. He has been granted honorary membership by professional organizations around the world, including the Federation of Latin American Surgeons, and the Argentinian, Indian, Peruvian, German and Israeli Societies of Surgery.

Areas of Research and Publication:

Dr. Rosenthal is author or co-author of over 300 abstracts and peer-reviewed publications, more than 30 book chapters and over 100 educational videos. He has contributed over 80 book chapters and is the Co-Editor of several books including the ASMBS Textbook of Bariatric Surgery, Globesity, Netter's Gastroenterology, The Pathophysiology of Pneumoperitoneum, Fluorescence Imaging for Surgeons, Operative Strategies in Laparoscopic Surgery, Weight Loss Surgery and Mental Conditioning to Perform Common Operations in General Surgery Training: A Systematic Approach to Expediting Skill Acquisition and Maintaining Dexterity in Performance.

Consulting and/or Speaking. Dr. Rosenthal receives fees of $5,000 or more per year as a paid consultant, speaker or member of an advisory committee for the following companies:

Given the fact that I was facing an emergency situation but not to the point of been admitted to the emergency room of the hospital, I call directly the office of Dr Rosenthal, who has been the surgeon on two of the most important surgeries I had at the Cleveland Clinic, therefore bypassing the hospital regular scheduling. His office responded greatly with an appointment for the following day.

I found Dr Rosenthal extremely easy to deal with. he was extremely professional. he gave me detailed information on the procedure whilst at the same time being extremely approachable. I wish every doctor id seen over the last number of years was as good.

waited for an hour after getting inside the patient room. not too bad as I waited for at least 1.5 hour in other doctors office. maybe , they will not over book patient too much so it's not like we have to wait that long. 30 mins will be acceptable. just my recommendation. thanks

he listen and give ample of time in my first visit. he is not like in a hurry compared to other doctor.

Excellent doctor. The recovery after my surgery has been great. I am very thankful.

I was very impressed with the Doctor and explained everything about my surgery!

I was very impressed at how Dr. Rosenthal explained how he would perform my procedure. He literally drew me a picture. I asked a lot of questions and he was very patient and answered every one of them and handed me a few of his business cards. I called the office to ask a couple questions about the preoperative testing, and they were extremely pleasant and answered all my questions as well with great detail and gave me additional information that was extremely helpful.

dr was thorough and knowledgeable.

Dr R and Karol are excellent

I was very impressed with Dr. Rosenthal.

the doctor was terrific. the supporting staf did not give as nearly a competent job. they need improvement

dr and team were very kind honest and thoughtful ,trying to do the best for me and were caring

doctor listened and answered all my questions.

Dr. Rosenthal's group is the Best!

*Raul Rosenthal, MD is a miracle surgeon. I, as well as the community, is fortunate to be under his care. He is the best surgeon.

Dr. Rosenthal, is a wonderful surgeon who is humble even after saving my life over a decade ago. He continues to care for all his patience current, old and new. After 4 years of my local team unable to help me and allowing my health to worsen Dr. Rosenthal, has gone out of the way to support and not give up on me. This is the first time in 4 years I am hopeful.

Dr. Rosenthal, is an inspiration and I look forward to working with him to save my life again.

I received calls personally from Dr. Rosenthal and not just his staff.

very friendly doctor. And hel educationed me well on what was going on with my body

I would and have recommended several people to this practice. I travel from 2 1/2 hours away and would travel further for the outstanding care I have always received here. Dr. Raul Rosenthal is absolutely amazing and his staff has always been exceptional.

Dr. Rosenthal is a very caring and compassionate provider. Is very knowledgeable and thorough. I have complete faith and trust in him that he will be able to fix my problem.

I couldn't ask for better treatment than I received from Dr. Rosenthal. I'm 100% confident in him.