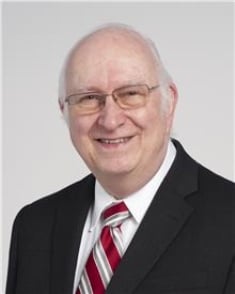 Eugene Blackstone, MD, is full-time head of Clinical Investigations at the Sydell and Arnold Miller Family Heart, Vascular & Thoracic Institute at Cleveland Clinic, and staff member of the Department of Thoracic and Cardiovascular Surgery, Quantitative Health Sciences and Transplant Center. Dr. Blackstone is board-certified as Diplomate, National Board of Medical Examiners and as a Fellow, American College of Cardiology.

At Cleveland Clinic, Dr. Blackstone heads a multidisciplinary clinical research team focused on ischemic and valvar heart diseases, heart rhythm disturbances, heart failure (including transplantation, ventricular assist devices and alternatives to transplantation), and benign and malignant diseases of the esophagus and lungs. The research team consists of nearly 50 individuals, while approximately 180 projects are ongoing at any given time. Since 1993, at the University of Alabama at Birmingham (UAB) and continuing at Cleveland Clinic, he has led a team of computer scientists in developing a novel semantic approach to data storage and use.

For three years, Dr. Blackstone served as a Major in the Medical Corps in the United States Army where he was Chief of the Cardiovascular Medicine Branch in the Aviation Medicine Research Division at Fort Rucker, Ala. He became a consultant to the Office of the Surgeon General, Department of the Army and to the National Aeronautics and Space Administration on Space Lab I, Space Lab II, and Orbital Flight Tests.

In 1980, Dr. Blackstone was appointed to an endowed university chair at UAB as Cardiovascular Surgical Research Professor of Surgery. A major culmination of Dr. Blackstone’s activities is the textbook Cardiac Surgery, now in its third edition.

Since 1987, Dr. Blackstone has been Associate Editor of the flagship journal The Journal of Thoracic and Cardiovascular Surgery. In 2005, he became an editorial consultant for the Journal of the American College of Cardiology. He has published more than 500 articles and has received numerous awards, including the 2003 Maria and Sam Miller Professional Excellence Award for Scientific Achievement in Clinical Research and the University of Chicago Alumni Association Distinguished Service Award, Division of Biological Sciences in 1998.

He holds many memberships, including the American Association for Thoracic Surgery, American College of Cardiology and American Heart Association.

Dr. Blackstone is an organist and a pianist, with a 68-rank, 4-manual pipe organ in his home.

Donation of Financial Interest. Dr. Blackstone has consulted for, received compensation for serving as a fiduciary from, or received royalties from the following companies but instructed them to donate all compensation to not-for-profit causes or to the Cleveland Clinic to support research and education: