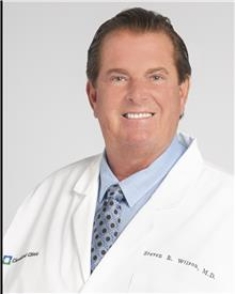 Steven E. Wilson, MD, received a bachelor’s degree in biology from California State University Fullerton and a master’s degree in molecular biology and biochemistry (Irvine) and an MD (San Diego) from the University of California.

His postgraduate training included an internship in internal medicine at Cedars-Sinai Medical Center in Los Angeles, and residency in ophthalmology at the Mayo Clinic. In addition, Wilson has held faculty positions at the University of Texas Southwestern in Dallas, Cleveland Clinic, and the University of Washington in Seattle, where he was Chair of Ophthalmology and Grace E Hill Professor in Ophthalmology and Biological Structure until 2003. He is currently Staff Refractive and Corneal Surgeon and Director of Corneal Research at the Cole Eye Institute at Cleveland Clinic.

Wilson has edited many medical journals and papers, held national and international committee responsibilities under the auspices of organizations such as the National Institutes of Health, the Eye Bank Association of America, and Fight for Sight. He is a former trustee and vice president for the Association for Research in Vision and Ophthalmology (ARVO) the largest vision research organization in the world and served on the executive board for ISRS-AAO and is the program chairman for ISRS-AAO for 2006.

Wilson holds various medical patents; is a highly trained and skilled scientist and surgeon; has been awarded numerous research grants in the field of ophthalmology and vision research; and he has authored and presented more than 250 papers, medical books and book chapters. His research focuses on gene delivery to human cells using viral vectors, wound healing, and cytokines and receptors in eye tissues and breast tissues. His laboratory is funded by the National Eye Institute and the Department of Defense (DOD). He is also a leading expert in Dry Eye and Ocular Surface and helped design and implement the phase III clinical trial for topical cyclosporine for dry eye.

Dr. Wilson was selected as a finalist for the Benjamin Franklin Award for 2004 in the category Best New Voice in Fiction for his first international thriller Winter in Kandahar. His second international thriller, Ascent from Darkness, was released September 1, 2007 and was an honoree at the New York Book Festival and Hollywood Book Festival in 2007. The Benghazi Affair, the third book of The Stone Waverly Trilogy, was released in 2018 and was the Benjamin Franklin Award Audio Book of the Year in Fiction for 2019, as well as a finalist for the Eric Hoeffer Book of the Year award and a B.R.A.G. gold medal finalist for 2019. Dr. Wilson's fourth Novel "The Ghosts of Anatolia: An Epic Journey to Forgiveness: was published in 2010 and won the Foreword Reviews Book of the Year Award in Multicultural Fiction in 2010 and wasthe Runner-up Award for general fiction in the Hollywood Book Festival in 2011. His memoir "The Making, Breaking and Renewal of a Surgeon-Scientist: A Personal Perspective of the Physician Crisis in America" was published in 2019. All Dr. Wilson's books are available exclusively on Amazon.com and Audible.com.

Dr. Wilson explained the best procedure for my care and the reason he selected the procedure.

I like the continuity of care with Dr. Wilson. We know each other.

Dr Wilson continues to be one of the most profession, adept medical professional I have the privilege of frequenting. He and his entire staff do an excellent job.

Possibly the most involved doctor I have ever had

Dr Wilson is awesome, his nurse was also exceptional

Dr Wilson gives me hope regarding my condition

Dr Wilson and the staff at Cole Eye Institute were very courteous, helpful and responsive.