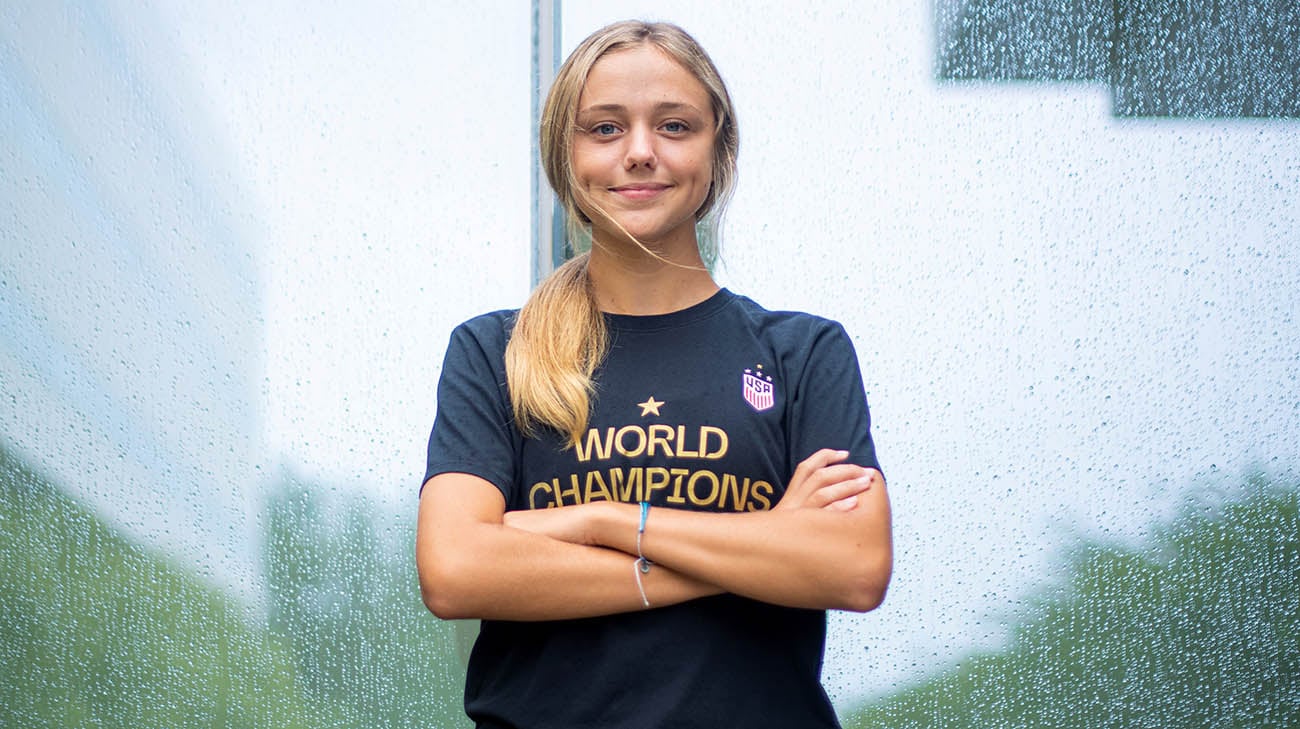 Taking a pass from a teammate, just past the midfield line, senior Meredith Coloian dribbled ahead for a few seconds, and then suddenly launched a right-footed shot, more than 30 yards from goal.

As it arched over the backpedaling goalie and landed in the upper-left corner of the net, her Avon High School soccer teammates rushed towards their star midfielder who had just won the division title over arch-rival Magnificat with a game-winning “golden goal” in double overtime in October 2021.

“They tackled me,” laughs 18-year-old Meredith, who will begin her freshman year in the fall of 2022 as a member of the John Carroll University soccer team. “It was an awesome moment and super fun.” 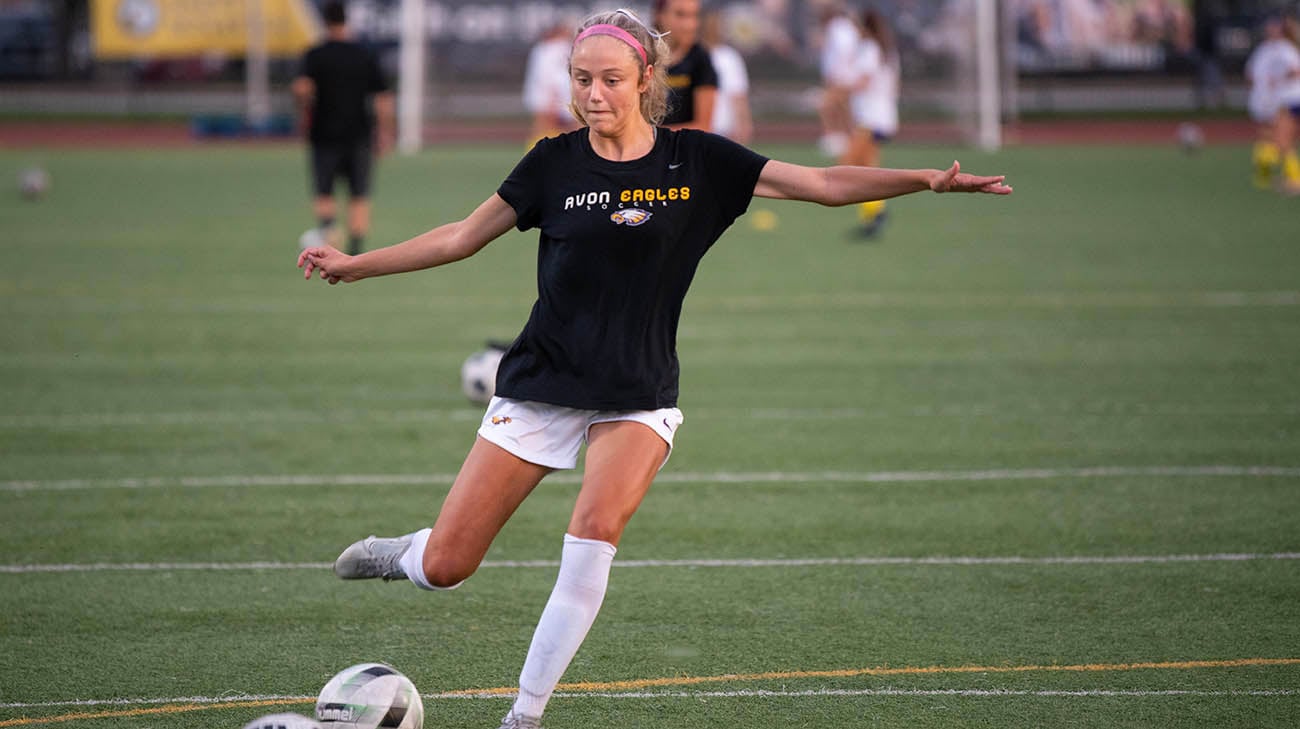 Meredith warming up for one of her senior games with her teammates from Avon High School. (Courtesy: Cleveland Clinic)

It was also a moment that must have seemed unlikely to occur just a few months prior, when Meredith struggled to play for even 10 minutes during games with her club team. Ineligible to get the COVID-19 vaccine in January 2021, Meredith got tested for the virus when a friend contracted the disease.

Her test came back positive, but Meredith – a talented athlete who has loved soccer since age 3 – assumed she would quickly return to the game after sitting out a few weeks. Her symptoms were mild, “like having a cold,” she says, although she did lose her senses of taste and smell for a while.

However, the fleet-footed athlete, whose best attribute is her endurance in fast-paced high-level soccer games, would almost immediately feel winded and chest pain when she tried to compete in matches. 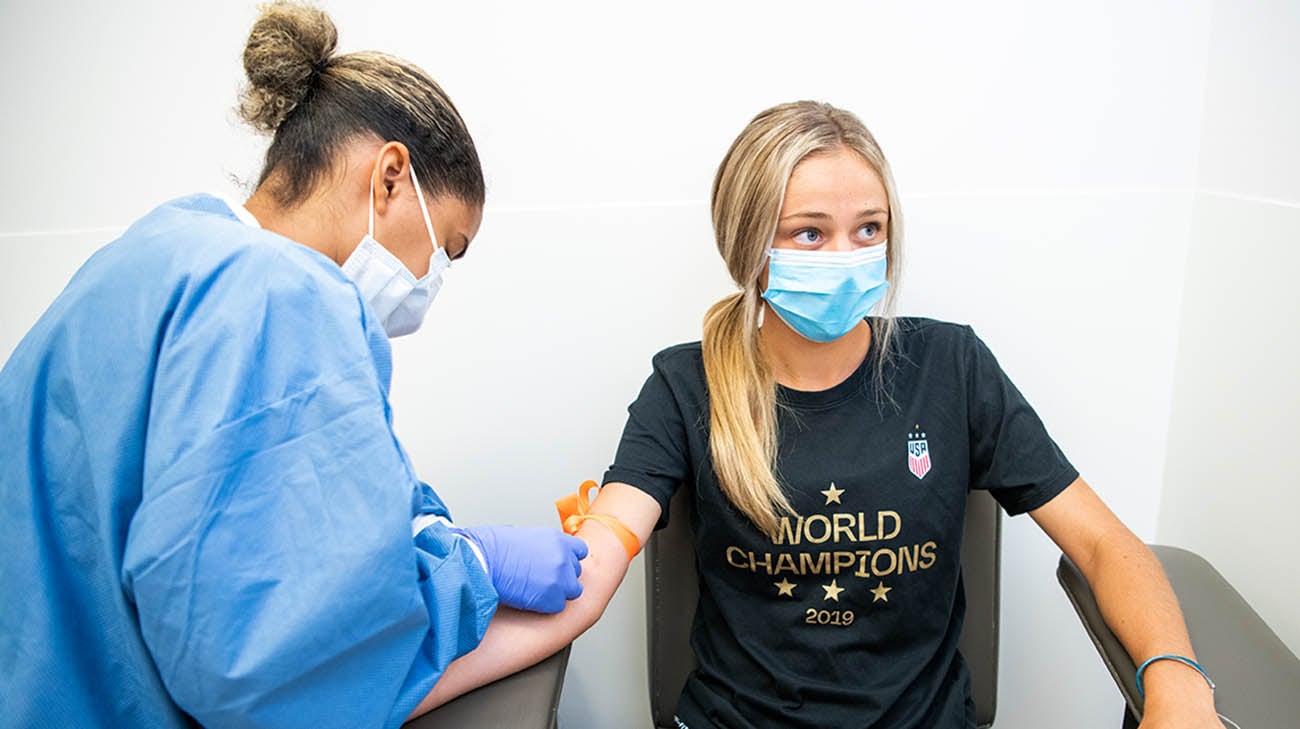 “I’ve been tired on the field before, but it was never a feeling like this,” she observes. “I felt chest pain right away, as soon as I started running. It wasn’t horrible, just uncomfortable. I thought it might take a couple of days to get better, but it kept getting progressively worse. And this is right while I’m going through the recruiting process for college scholarships.”

“She would run for 10 minutes and her hand would come up signaling she needed a break,” adds Meredith’s dad, Gary. “That wasn’t the way she played soccer. She never asked to come out of a game.”

After struggling for a few more weeks, Gary and Lisa, Meredith’s mom, heeded the recommendation of a friend who is a physician and scheduled a visit for their daughter with Tamanna Singh, MD, Cleveland Clinic cardiologist and co-director of the Sports Cardiology Center, who specializes in cardiovascular issues affecting athletes. 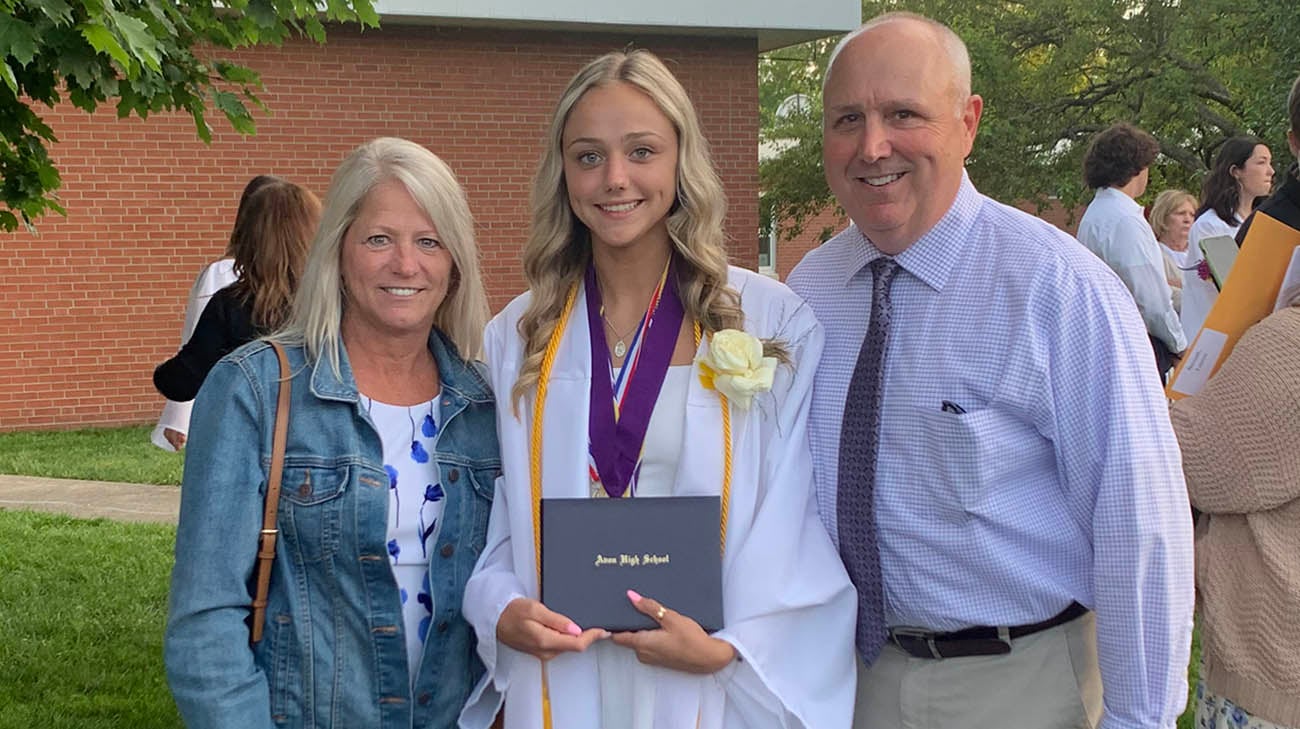 Meredith with her parents, after her high school graduation. (Courtesy: Meredith Coloian)

“When she felt this pressure on her chest, we knew we had to get it addressed,” says Lisa. “The question was had damage been done to her heart?”

Dr. Singh has seen lingering symptoms similar to Meredith’s among other athletes dealing with long-haul COVID, which occurs in about 10% of people who’ve had COVID-19 . “But with high school and college athletes, we always want to be mindful of the fact something unrelated to COVID may be precipitating symptoms of chest discomfort, specifically causes related to sudden cardiac arrest and death,” Dr. Singh explains. “We have to make sure we’re addressing all the possibilities.”

Dr. Singh and her team conducted a battery of comprehensive cardiac tests on Meredith, including assessments of her heart muscle and the pericardium, which is the sac that holds the heart. An MRI did show a minimal amount of fluid in Meredith’s pericardium – called a small pericardial effusion – but it was not severe and required no invasive treatment. 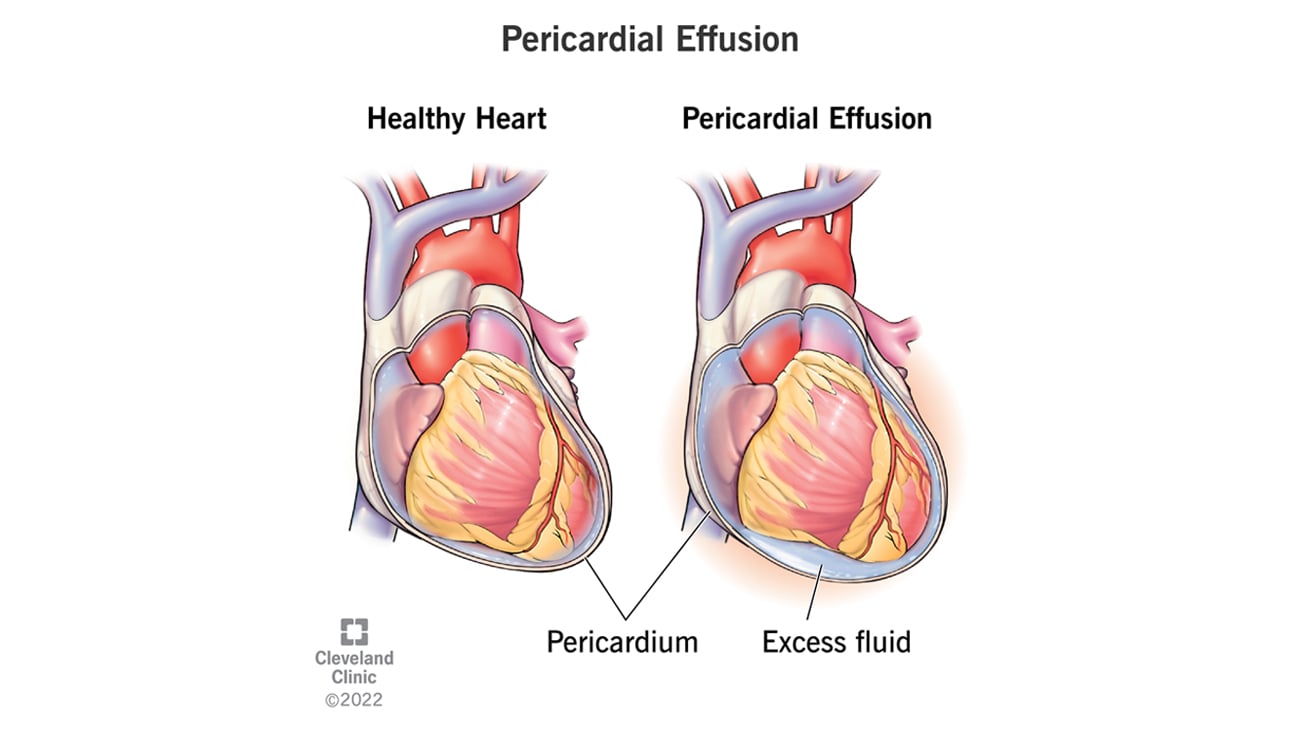 After undergoing a battery of tests, an MRI showed a minimal amount of fluid in Meredith's pericardium, called a small pericardial effusion. (Courtesy: Cleveland Clinic)

Ironically, Dr. Singh adds, the very symptoms that cause chest-related discomfort in many post-COVID athletes are preventing them from exercising strenuously enough to remain in shape – and so that “cycle of symptoms continues to perpetuate.”

As Lisa noted, confident that her heart was healthy, Meredith “learned to play through the pain without a lot of rest. And it’s gotten better for her.”

Meredith has been following Dr. Singh’s suggestions for improving her cardiovascular health by taking iron and vitamin supplements, maintaining a healthy diet, staying hydrated and replenishing electrolytes after strenuous activity. Slowly, the pain and discomfort have dissipated and Meredith’s endurance has returned to near normal. 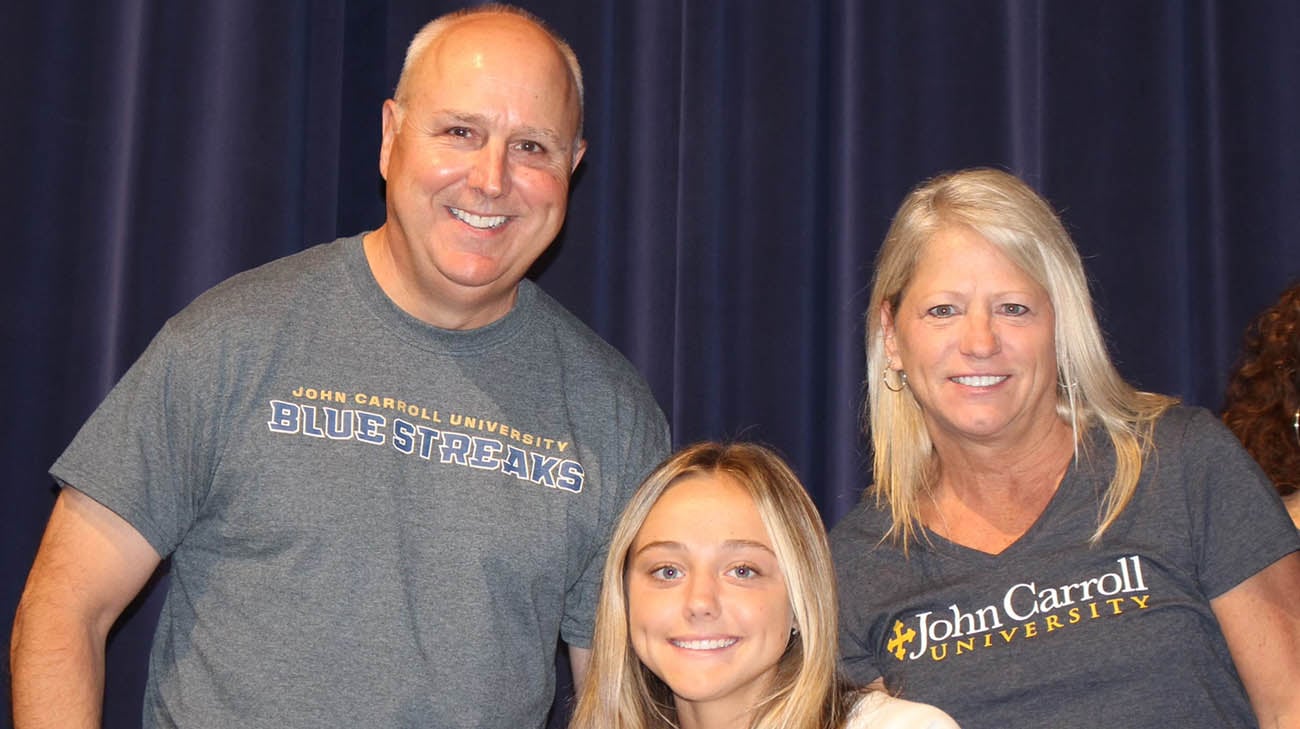 Meredith has slowly been able to regain her endurance. She signed on to play soccer at John Carroll University. (Courtesy: Meredith Coloian)

As she begins her first season as a collegiate soccer player, Meredith is hopeful she’ll experience fewer occurrences of pain and discomfort and more memorable moments like her game-winning goal.

“I think time has been the biggest factor for me,” says Meredith, who has since received the vaccine and follow-up booster shots when she became eligible. “It’s just taken a lot of time for my body to get fully better. I know exercise has really helped.”