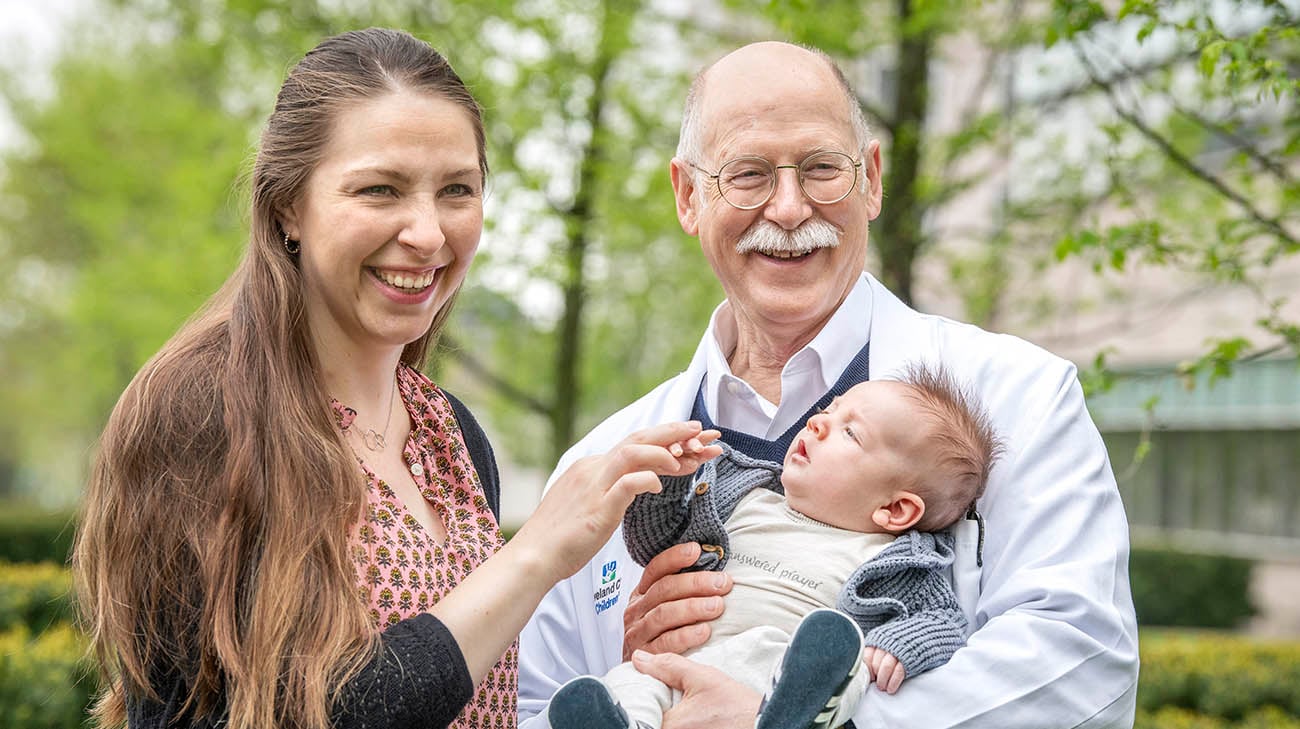 Peter Englert is just over 7 weeks old and will share the spotlight with his mom, Allie, on their first Mother’s Day this year. It’s a moment the 32-year-old nurse at Cleveland Clinic Cancer Center never thought she would have.

“He’s a pretty chill baby,” she says. “And I planned for a while for his name to be Peter. It’s the name of the person most responsible for saving my life. And I like the fact Peter means ‘rock.’ Because Dr. Anderson was my rock for the last six years.” 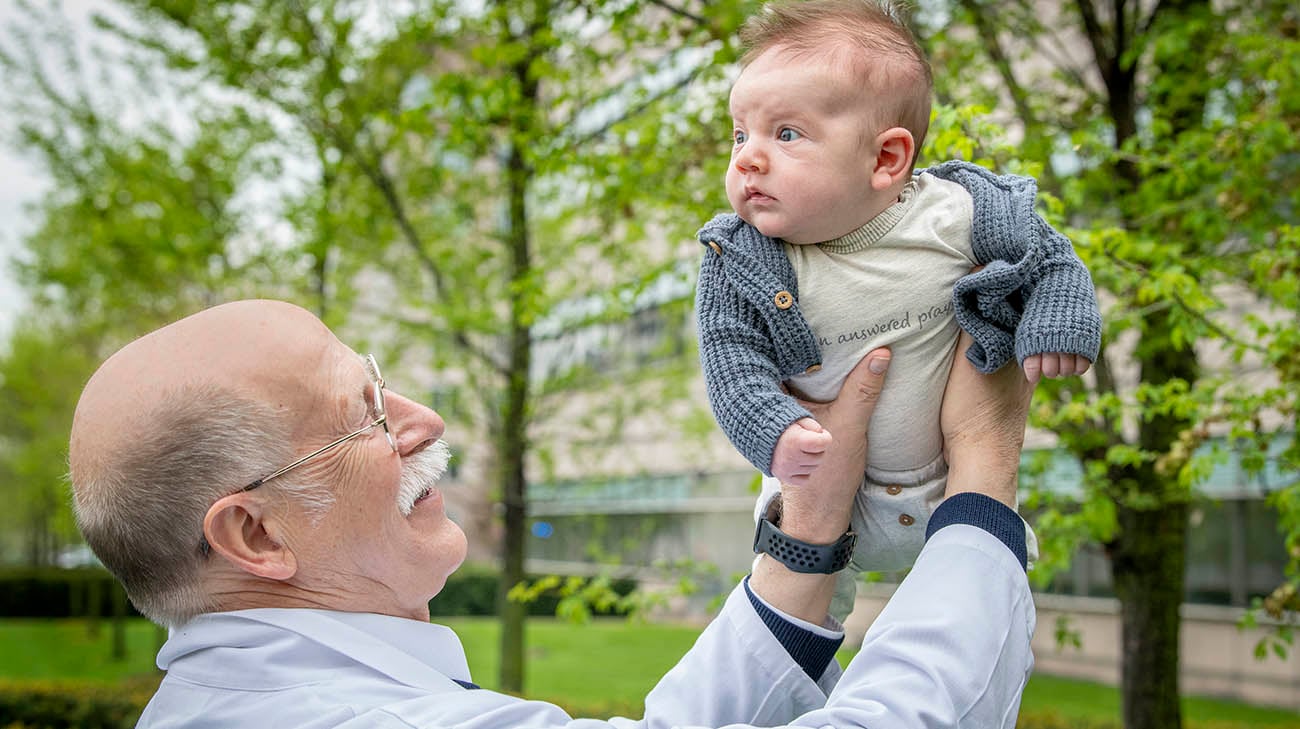 Allie is referring to one of her physicians, Peter Anderson, MD, a Cleveland Clinic Children’s hematologist oncologist who treats pediatric and adult patients. She affirms without the patience, guidance and expertise of Dr. Anderson, she wouldn’t have survived her cancer ordeal.

“Dr. Anderson has been a godsend. He’s one of the top sarcoma specialists in the world and an amazing man,” Allie adds. “It seemed fitting for my husband and I to name our son after him.”

In February 2016, Allie – then working as a nurse at another local hospital – was diagnosed with desmoplastic small round cell tumor (DSRCT), a rare form of soft-tissue sarcoma. It was a lump about the size of half an avocado, located on her back, near her spine. The cancer had also spread to a spot in her lung. Her prognosis was grim given the five-year survival rate of DSRCT is very low. 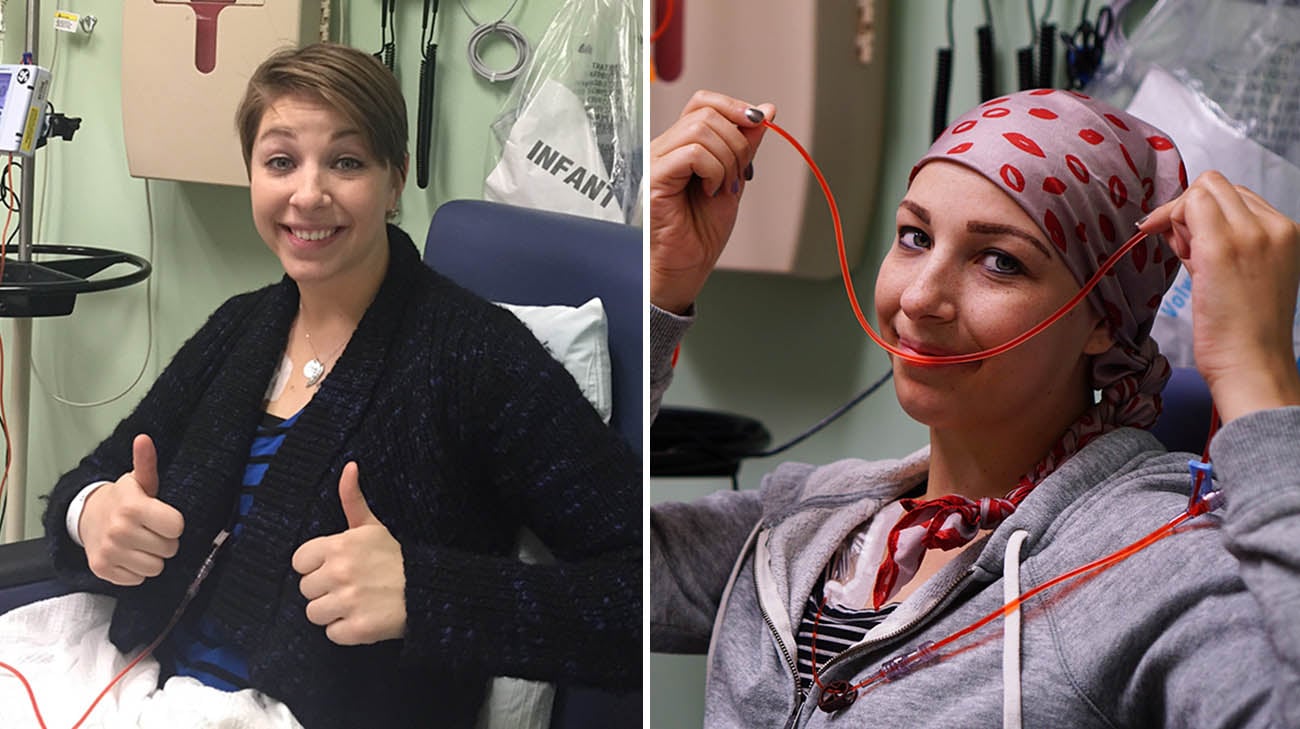 At the advice of her aunt, a fellow nurse, Allie sought out the expertise of Dr. Anderson, and thus began an odyssey that involved: six months of chemotherapy, a month of radiation and surgery to remove the sarcoma from her back, performed by orthopaedic surgeon, Nathan Mesko, MD, in November 2016. That treatment plan proved successful in removing the cancer.

“For about two years, everything was clear,” she notes. “I had (tests) every three months, but the spot in my lung eventually returned. At first I thought, this was the end and I was on the road to death. It was hard working with patients experiencing cancer and being a patient myself. But Dr. Anderson, of course, had a plan in place for me.”

Dr. Anderson considers himself to be something of an “orchestra conductor,” overseeing an integrated, multidisciplinary team of physician assistants, surgeons, infusion nurses, radiologists, oncology pharmacists and other specialists who have joined forces to give Allie the best treatment and hope for survival.

“It’s a very rare tumor,” he explains. “It often metastasizes from the get-go, and that makes your heart sink as an oncologist. It’s very difficult to cure and Allie’s was tough, because the tumor was in three spots. While she responded well to therapy, it eventually came back as it often does.” 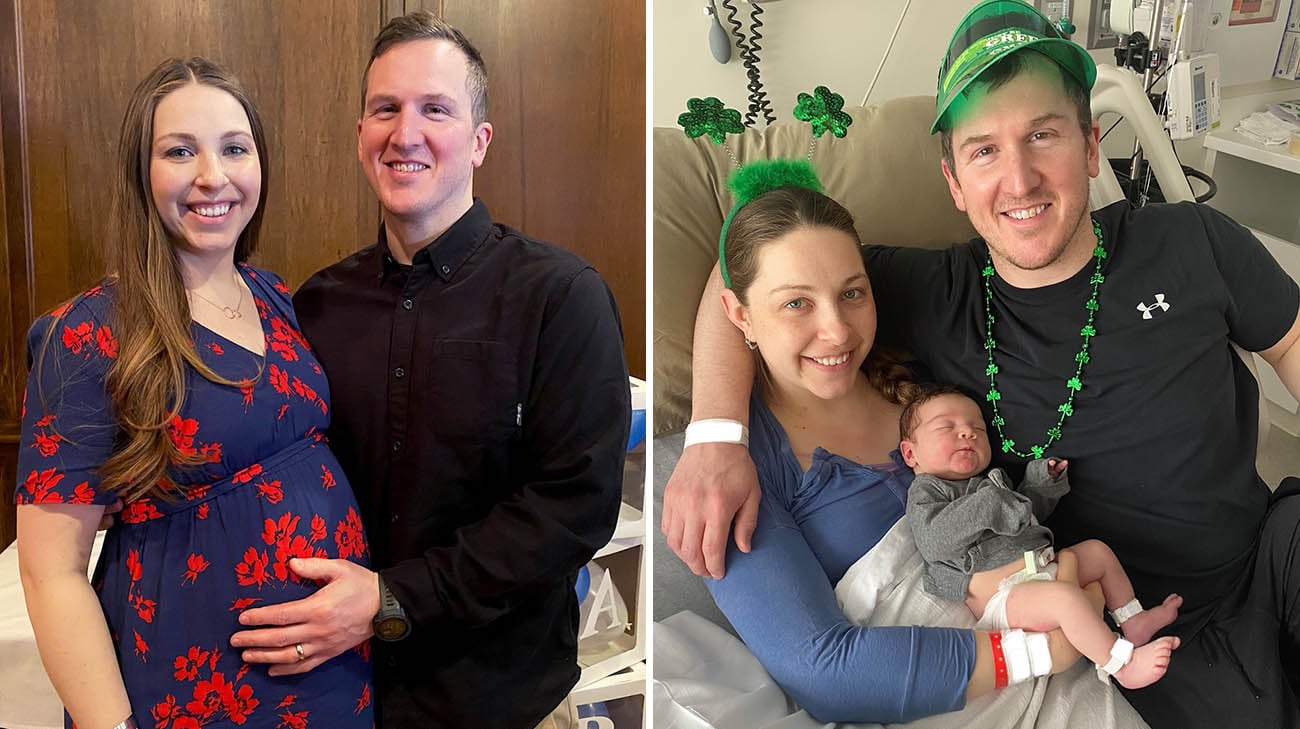 After the cancer returned, Dr. Anderson implemented an updated treatment plan that included another six months of chemotherapy using a different cocktail of drugs and pinpointed radiation to treat the spot on her lung. By July 2019, testing revealed Allie showed no evidence of cancer, and it has not returned since.

She credits Dr. Anderson for gently, yet persistently, guiding her through the process, recommending and amending treatment protocols to address the changes in how the cancer kept evolving. He also gave her and Tommy the go-ahead to try and get pregnant or to seek infertility treatment, if necessary. 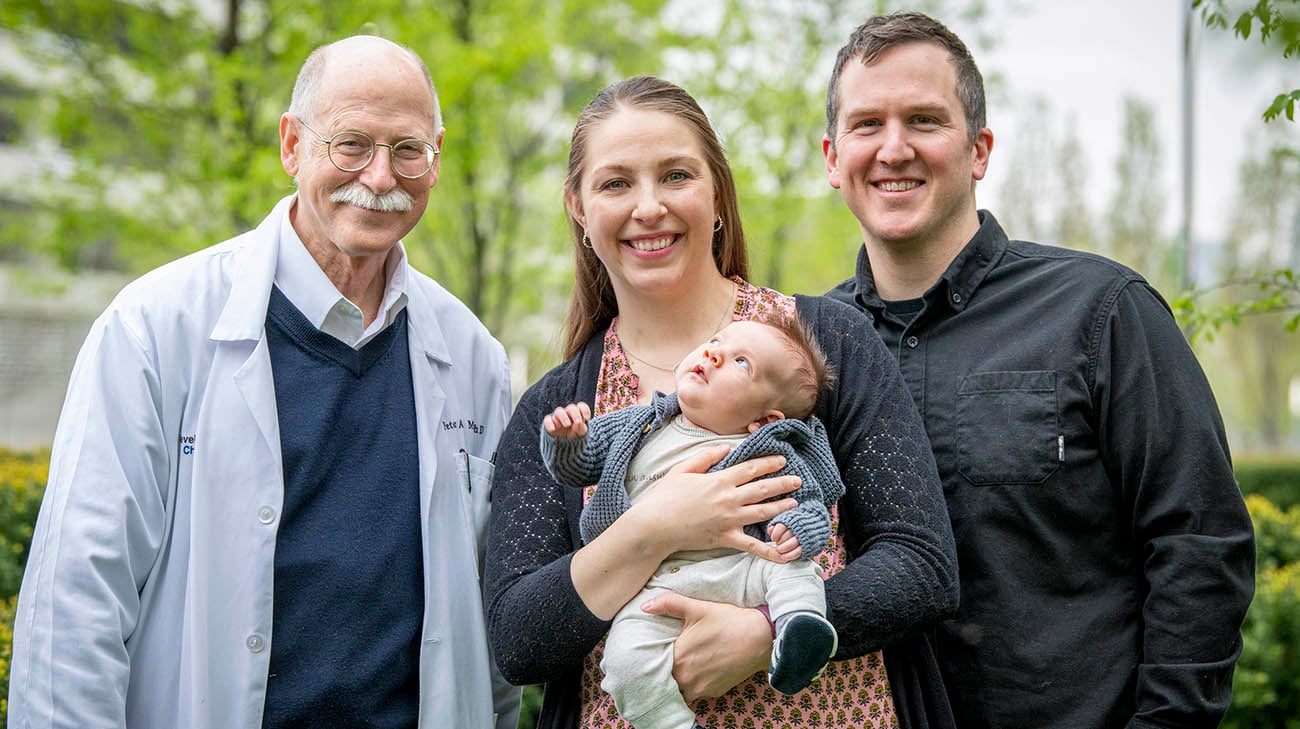 Allie and Tommy named their baby, Peter, after Dr. Peter Anderson -- the person Allie says is most responsible for saving her life. (Courtesy: Cleveland Clinic)

“When I was first diagnosed, I had to begin treatment immediately so I never had the chance to freeze my eggs,” notes Allie. “I wasn’t sure if my fertility was affected by the chemo and radiation.” 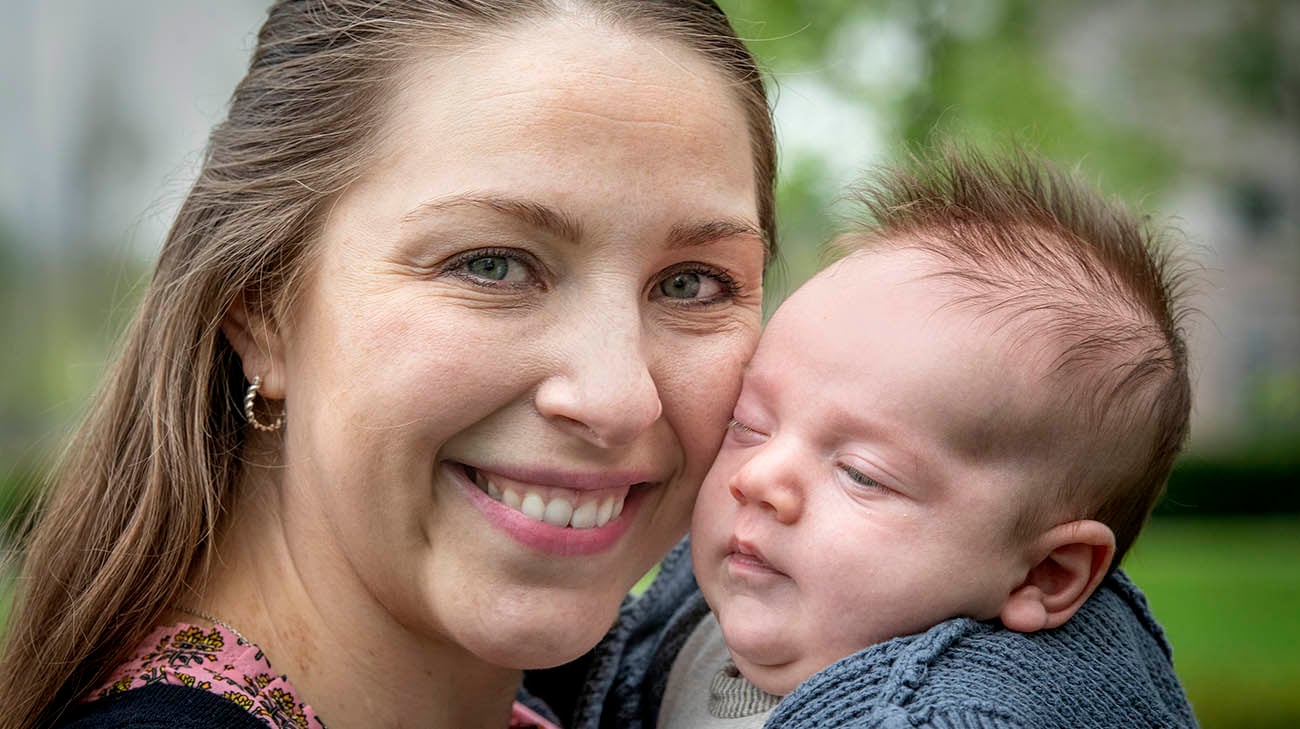 Allie is grateful she and Tommy have been able to grow their family by having sweet baby Peter. (Courtesy: Cleveland Clinic)

Dr. Anderson, too, is thrilled by his baby namesake. “Allie has been through a lot,” he states. “It’s been a delight to work with her. She’s living life to the fullest.”

“It’s impossible to stay positive all the time. You’re going to have some bad days,” Allie says. “You just have to take it one day at a time and be patient and persistent. Dr. Anderson would say that all the time, and my husband and I remember that whenever we’re going through difficult times.”