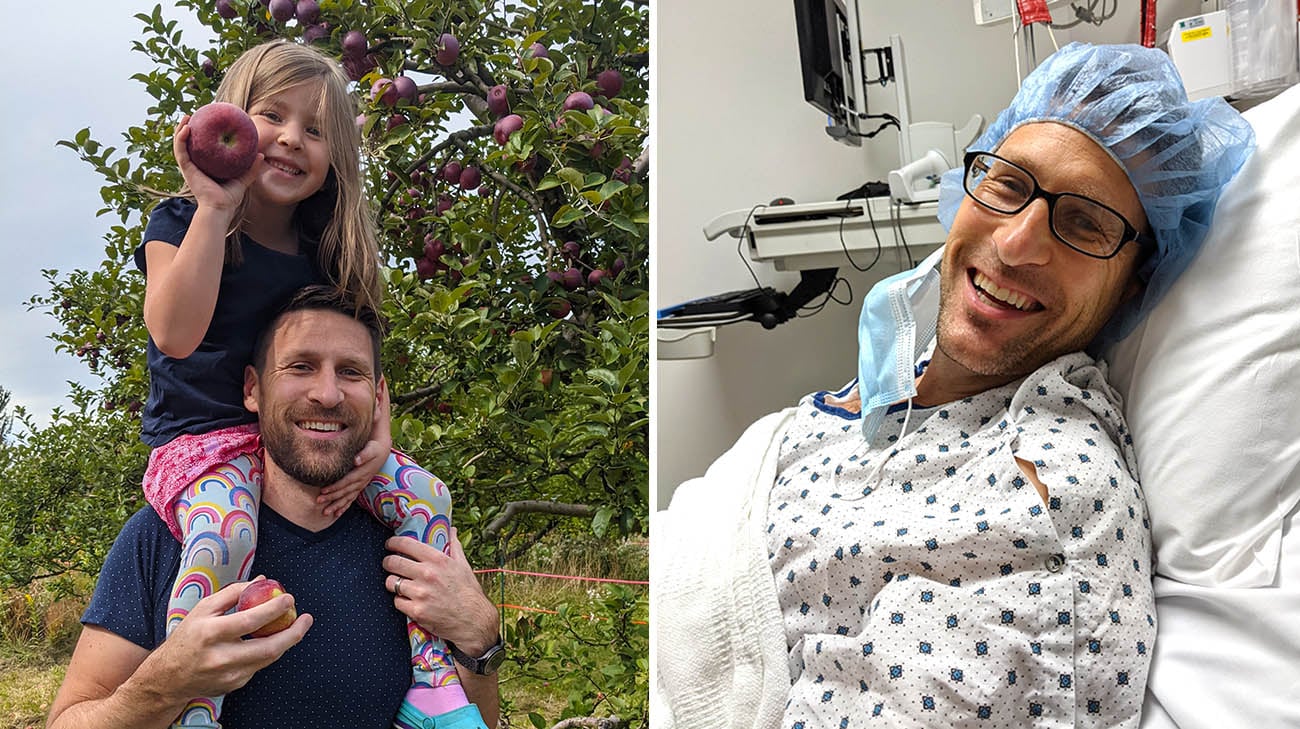 Dan Gut had experienced a number of symptoms, including a change in his bowel habits and blood in his stool, for about 18 months before mentioning them to his primary care physician. Since it often occurred after ingesting ice cream, the 39-year-old father of five assumed he was lactose intolerant and the symptoms would eventually go away.

“I hadn’t dealt with anything like what I was experiencing, and I didn’t want to deal with it,” admits Dan, who also rarely visited his doctor for routine checkups. “I felt healthy and was busy living my life, like a typical guy. Given the responsibilities I have with my family, getting checked out was something I should have done right away.”

Dan isn’t alone. According to a 2021 Cleveland Clinic survey, up to 26% of men go to the doctor less than once a year or never.

When Dan’s symptoms persisted, he made the decision to have them checked. His first-ever colonoscopy, a few months later, revealed numerous polyps with one advanced precancerous growth in his colon. Given the potential severity of this condition, his local physician referred him to David Liska, MD, a colorectal surgeon and director of Cleveland Clinic’s Weiss Center for Hereditary Colorectal Neoplasia and Young-Onset Colorectal Cancer Center.

“A lot of people who experience blood in their stool or changes in their bowel habits will attribute it to hemorrhoids. However, in some cases, it can be cancer,” Dr. Liska explains. “If Dan had waited much longer, he most likely would have gotten cancer that could have spread to other organs.” 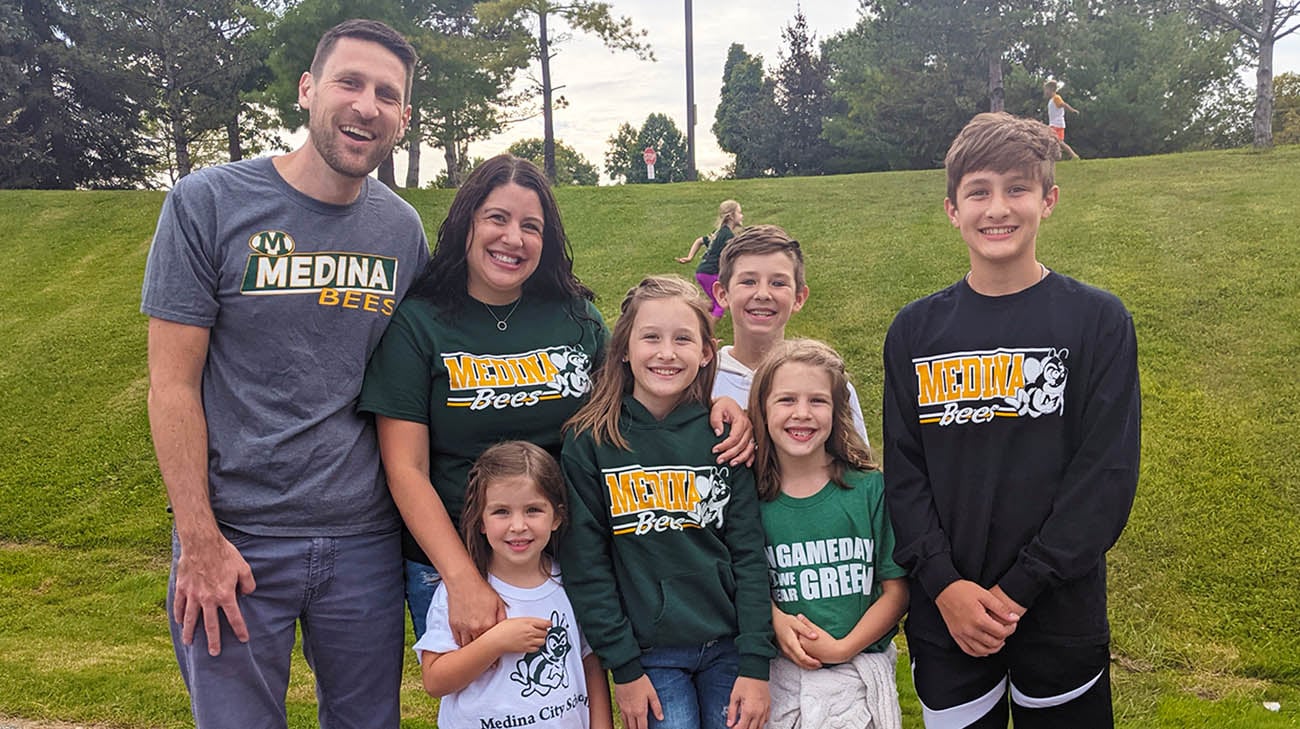 Dan says given his responsibilities as a father of five, he's incredibly grateful he received treatment before developing colorectal cancer. (Courtesy: Dan Gut)

According to Dr. Liska, the largest mass in the colon was determined to be an intramucosal carcinoma, which is an advanced lesion that is very close to being cancerous. Given its presence, as well as the more than 100 other polyps in various stages of growth, he recommended removal of Dan’s colon to prevent colorectal cancer.

“It was an overwhelming situation when I learned about the need to undergo colon surgery and all the polyps I had,” said Dan. “Thanks to the center’s approach, I was able to have a point person coordinate all the care I needed.”

Due to medical advancements in recent years, Dr. Liska was able to perform a minimally invasive laparoscopic total colectomy, making tiny incisions instead of open-surgery. Using a fiber optic instrument with a camera at its tip, he viewed the area on a large video monitor, enabling him to precisely remove the organ with laparoscopic tools. Dr. Liska was able to connect Dan’s small intestine directly to his rectum, allowing digestion and evacuation to continue normally.

Dan was hospitalized for several days and recovered quickly from the surgery. Because the removed polyps were precancerous, he did not require chemotherapy and only took over-the-counter medications to help regulate bowel function. He did, however, change his dietary habits. During his evaluation, Dan was diagnosed with celiac disease, which affects the small intestine. He must now maintain a gluten-free diet.

“I have to be careful about what I eat, like nuts. I have to chew slower and longer, so I get full faster,” Dan notes. “But now my energy level is higher than it used to be, and I feel better than I ever did before. I’m so blessed to have the outcome I had, given I ignored it for so long.” 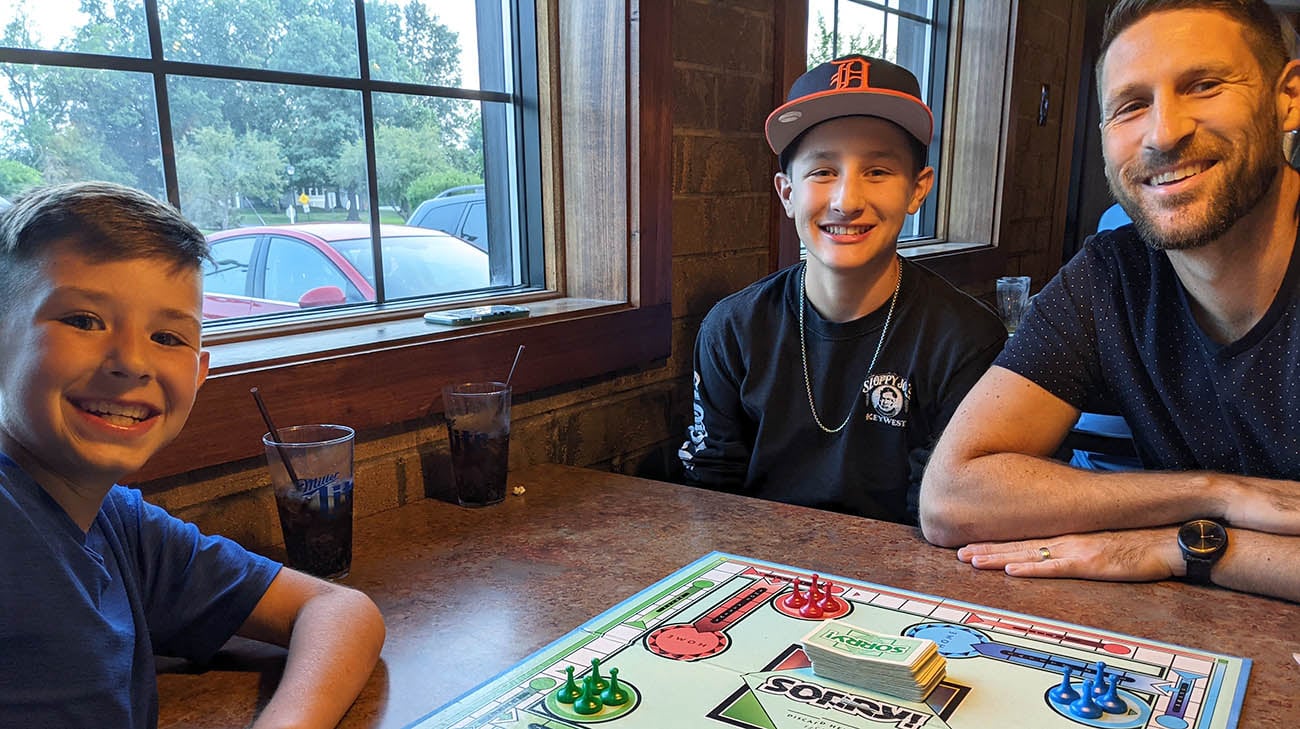 Dan with his sons. His message to people, especially younger adults, is to seek care immediately when they first notice changes in their health. (Courtesy: Dan Gut)

Dr. Liska urges anyone, including younger people, to not ignore symptoms and seek medical care immediately upon experiencing persistent abdominal pain, rectal bleeding or changes in bowel habits. According to the National Cancer Institute, cases of colorectal cancer in patients under age 50 have grown by more than 50% since the 1990s.

As colorectal cancer rates have fallen overall, researchers are trying to understand why they are rising in younger adults. Evidence has shown obesity and a sedentary lifestyle are associated with an increased risk of colorectal polyps and cancer. However, it’s likely other factors are also contributing to the increase in cases of young-onset (diagnosis before the age of 50) colorectal cancer.

A family history of colorectal cancer or inflammatory bowel disease can increase the risk of developing the condition. Individuals with these risk factors may need a colonoscopy before the age of 45, which is the newly recommended age for colorectal cancer screening in individuals who have an average risk.

“It’s important to know your family history, because that could put you at higher risk for colorectal cancer,” Dr. Liska adds. “Colorectal polyps or cancer can occur without symptoms. That hereditary information could be your only clue to prompt an earlier colonoscopy that can prevent the development of cancer.”