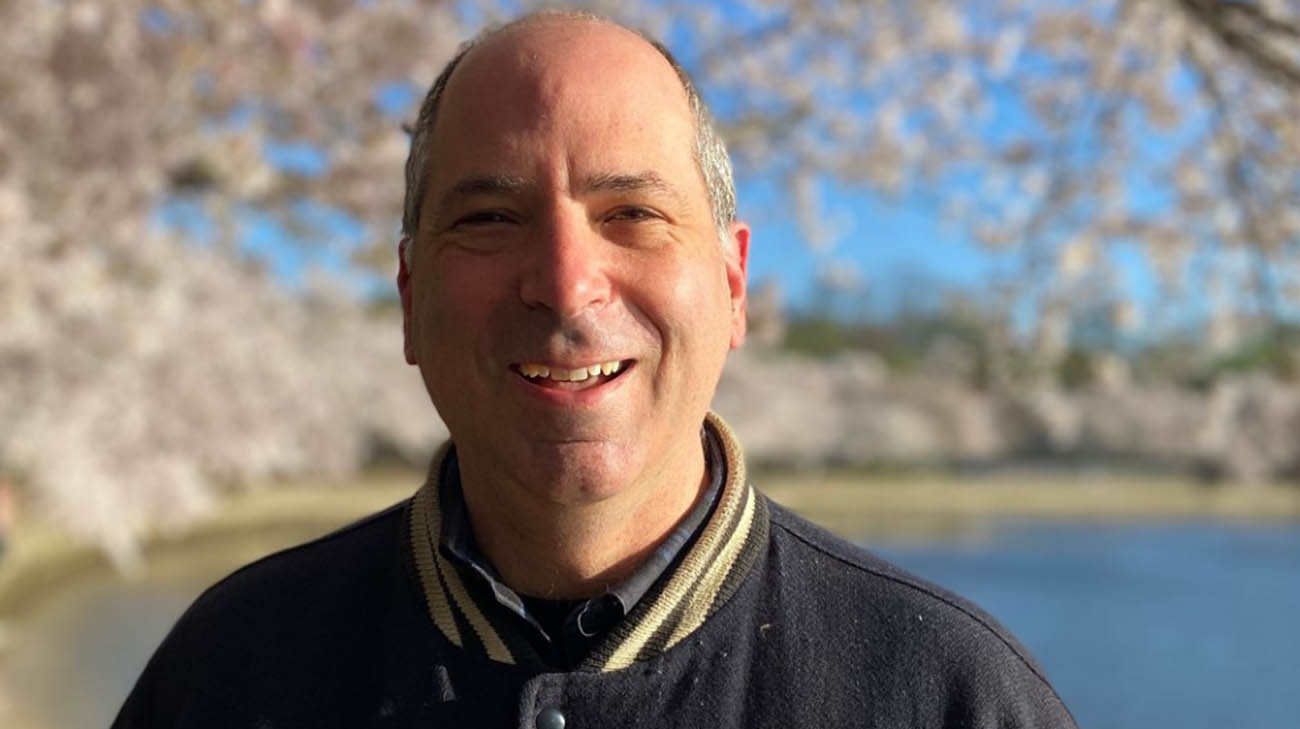 After 24 months of immunotherapy to treat stage 4 metastatic melanoma, scans show Rob Nosanchuk currently has no evidence of cancer. However, he still faces side effects from his skin cancer treatment. “With side effects, I was somewhat of an overachiever,” kids Rob, noting many immunotherapy patients experience no side effects, or very few. “It affected my joints, colon, thyroid and some neurological functions. But that doesn’t change the fact my number one emotion is gratitude. I was in the hands of a world-class oncologist, and she has made sure I have gotten the best treatment possible at every stage.” 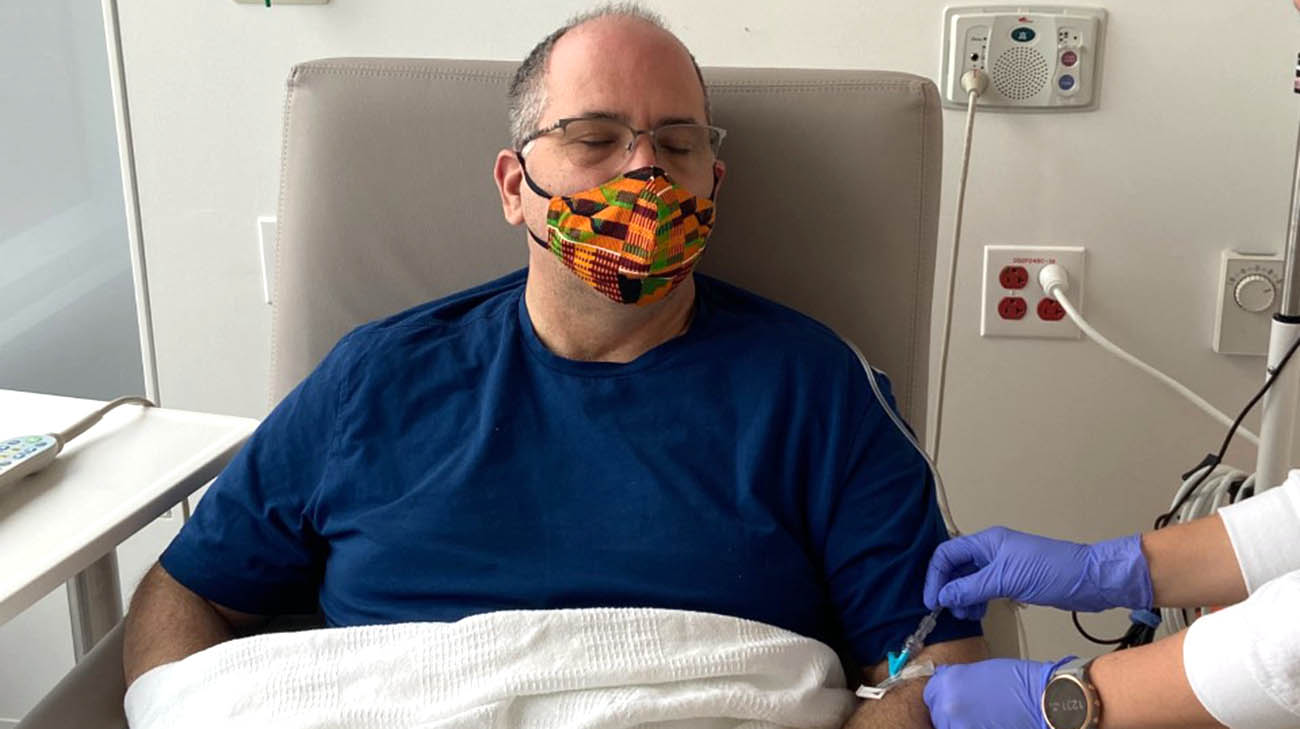 That oncologist is Cleveland Clinic’s Pauline Funchain, MD, who has overseen Rob’s care in collaboration with what he calls his “ologists” -- neurologists, endocrinologists, rheumatologists, gastroenterologists and psychologists  -- who worked together to effectively treat his cancer and immune-related adverse effects (irAEs) from immunotherapy. It’s a rapidly-evolving and highly-successful form of cancer treatment that stimulates the body’s immune system to attack cancer cells.

According to Dr. Funchain, chemotherapy was the de facto treatment for melanoma for decades, but it wasn’t particularly effective as the 5-year survival rate was about 10%. Immunotherapy, on the other hand, has increased the 5-year survival rate to almost 60%. “Chemo was used in some cases, because we had nothing else to offer,” she explains. “But Rob’s case is indicative of immunotherapy’s success. After two years, he has no disease and has a very good chance of staying that way.” 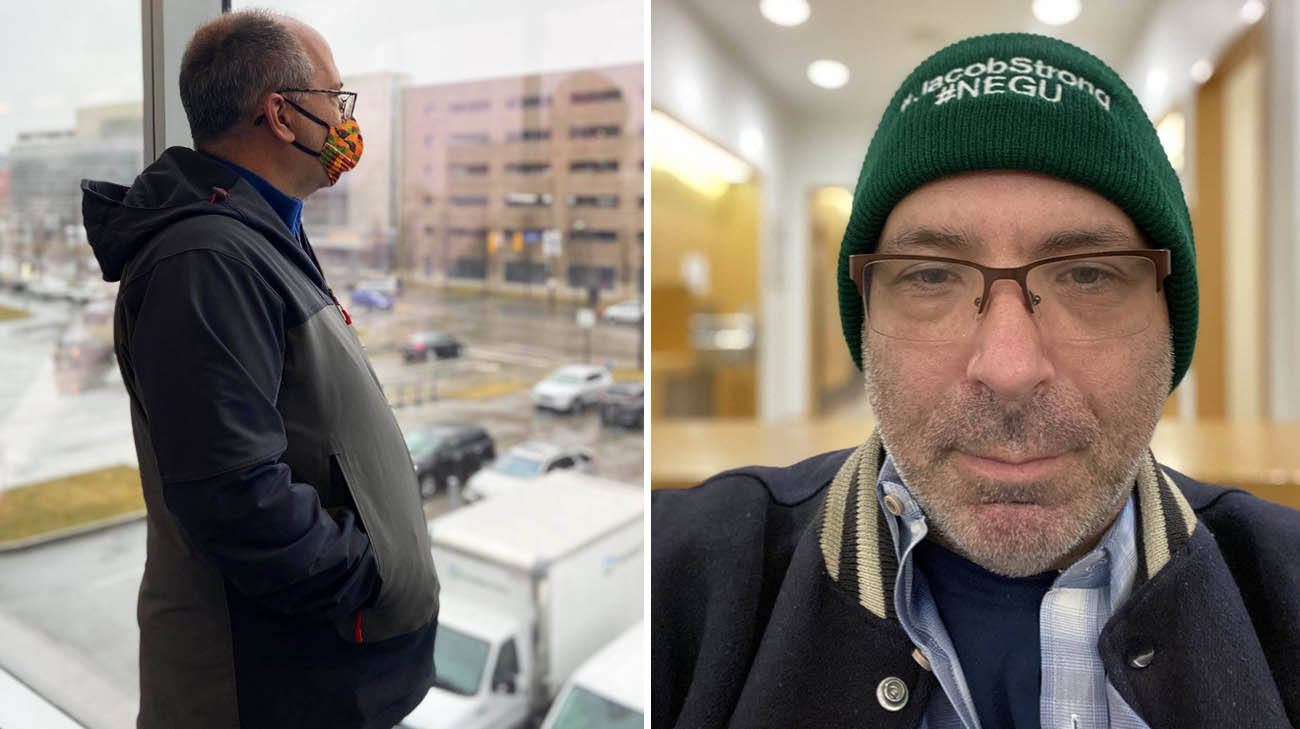 While skin cancer is often discovered by noticing lesions on the face, neck or torso, Rob – who visits a dermatologist regularly – had a form known as metastatic melanoma with unknown primary (MUP), which means there was no obvious site on the skin where it originated. It only occurs in about 3% of melanoma cases.

In Rob’s situation, his symptom was severe abdominal pain. A visit to Cleveland Clinic main campus emergency department included diagnostic scans revealing a suspicious mass near his adrenal glands. A needle biopsy several days later revealed the shocking diagnosis -- melanoma. It had already spread into his abdomen. “People ask me if I’m angry at God that I got cancer. I answer that I’m grateful to God for finding out I had cancer in time to be able to fight it,” says Rob, who serves as senior rabbi at Anshe Chesed Fairmount Temple in Beachwood, Ohio. 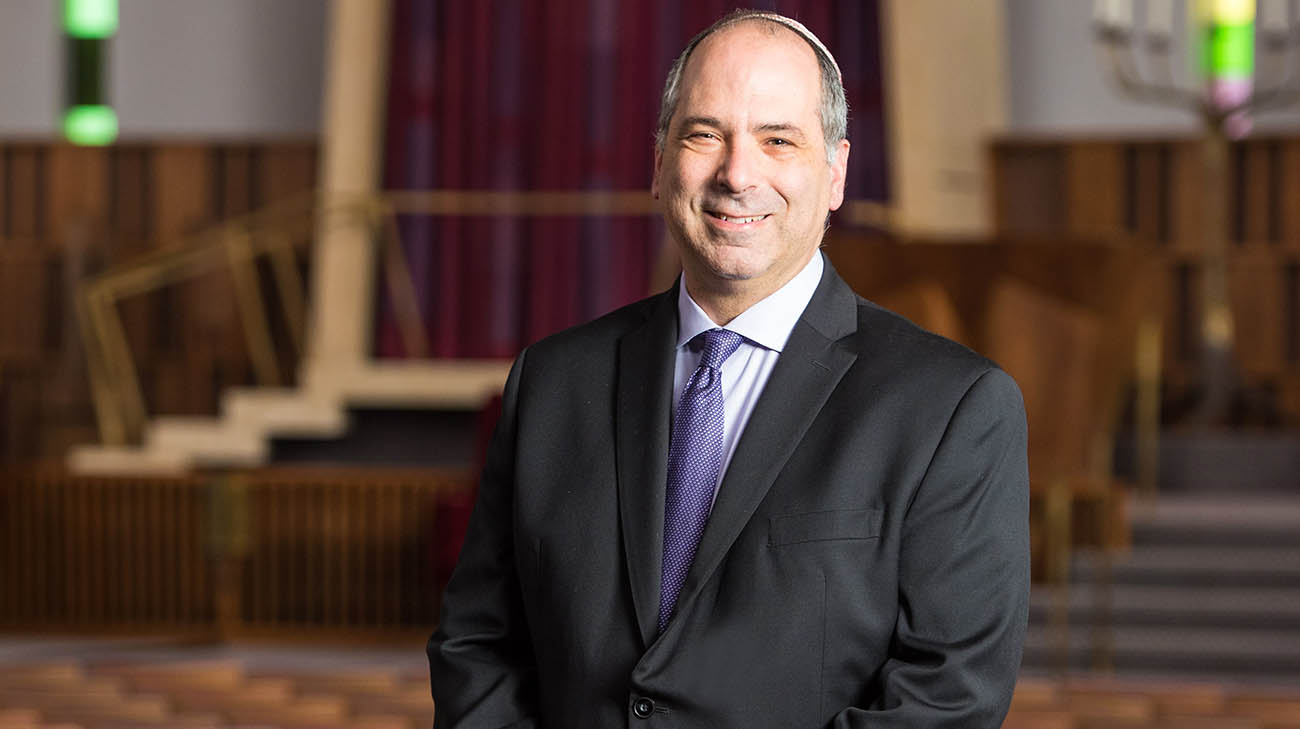 And fight it he did. While continuing his professional duties as a rabbi, Rob suspended many of his other daily activities, focusing his attention on battling the deadly disease. As he wrote in an email to his congregation and friends announcing the diagnosis, “I know this news is not easy to hear or read. It certainly is difficult to write. I have a battle against cancer to fight. And I am going to beat this, with your help.”

Rob credits his wife, Joanie Berger, and their two children Hope, 15, and Zachary, 20, for their unflinching support during his ordeal. He was also buoyed by the prayers and good wishes from friends, including those from other religious communities throughout the greater Cleveland area. 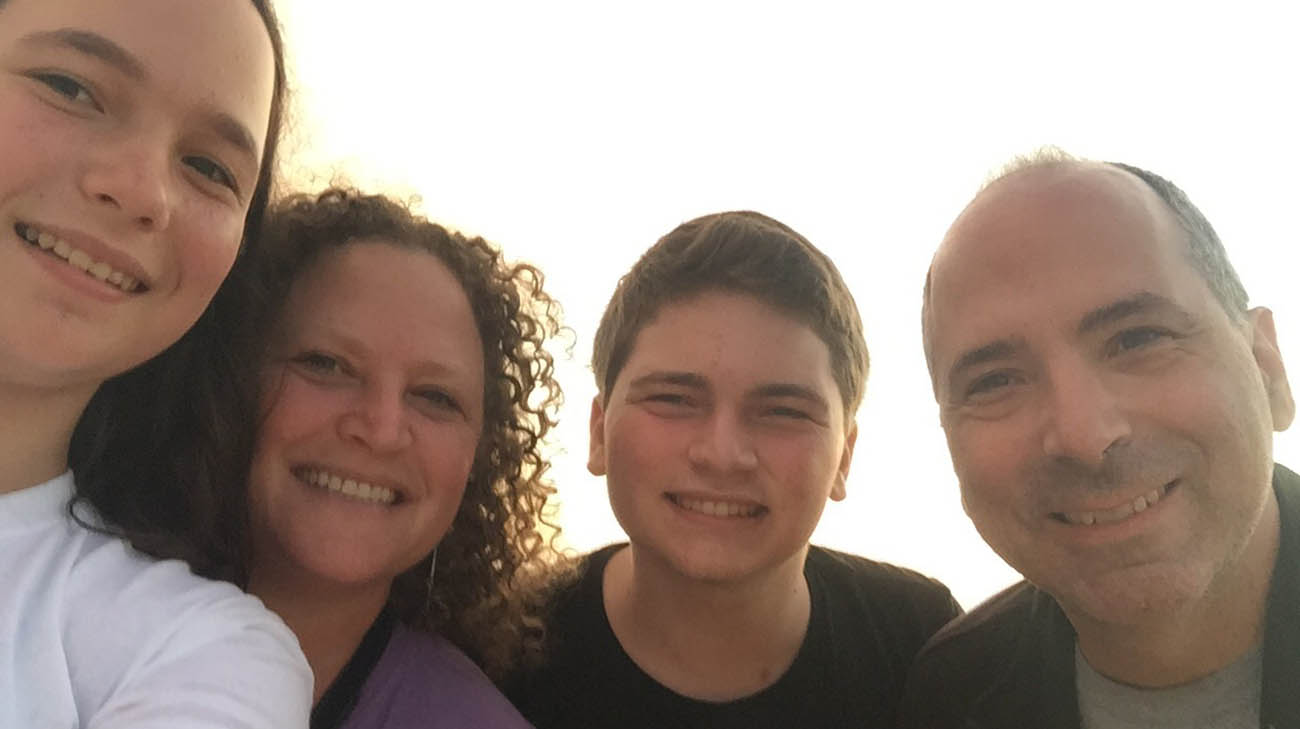 “It’s been a very challenging time,” says Rob. “But I don’t think I truly understood, until these last two years, what it means to be held by others in prayer and attention and reflection. It’s a very powerful feeling.”

He holds Dr. Funchain and the team of Cleveland Clinic caregivers in high regard, for guiding him with patience and compassion throughout his varied treatments, especially when he encountered unexpected medical difficulties: “I don’t know how I would have made it through this without the attention and care I received from Dr. Funchain and her team. They set a tone that kept me from being thrown by things that could be tumultuous.” 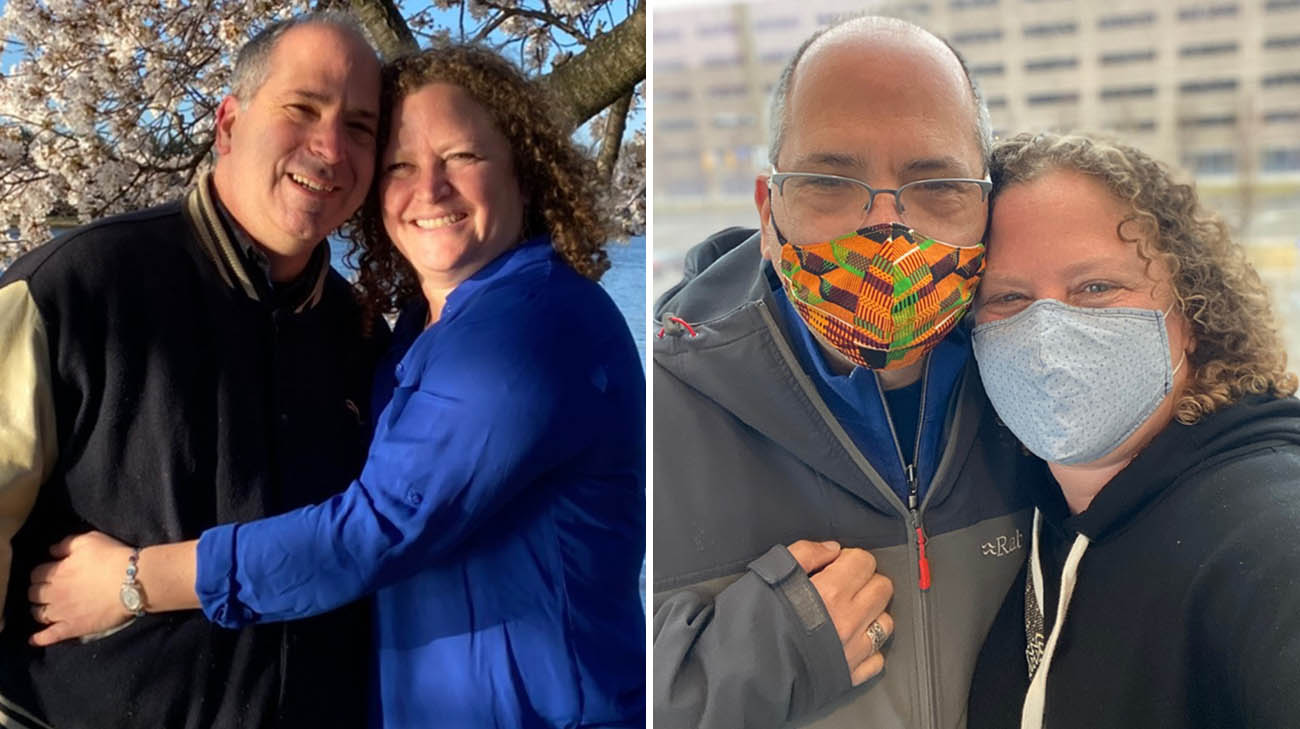 Rob remains incredibly grateful to his wife of 23 years, Joanie, their family, friends and the community for their continued support throughout his journey. (Courtesy: Rob Nosanchuk)

While most melanoma patients undergoing immunotherapy have limited side effects, some, like Rob, have several. Rob has coordinated ongoing fundraising efforts towards research that will study the cause of and optimal treatment for irAEs.

On May 23, 2021, Rob celebrated his last immunotherapy treatment with a virtual fundraising event open to the community.

“One of the most remarkable things about Rob is that he is a person who sees the world through other people, and how he can help them,” Dr. Funchain says. “Because some people treated with immunotherapy can suffer serious side effects, he wants others to avoid what he had to go through. That he chose to celebrate his own milestone by raising money for research, to help others, is just beautiful.”