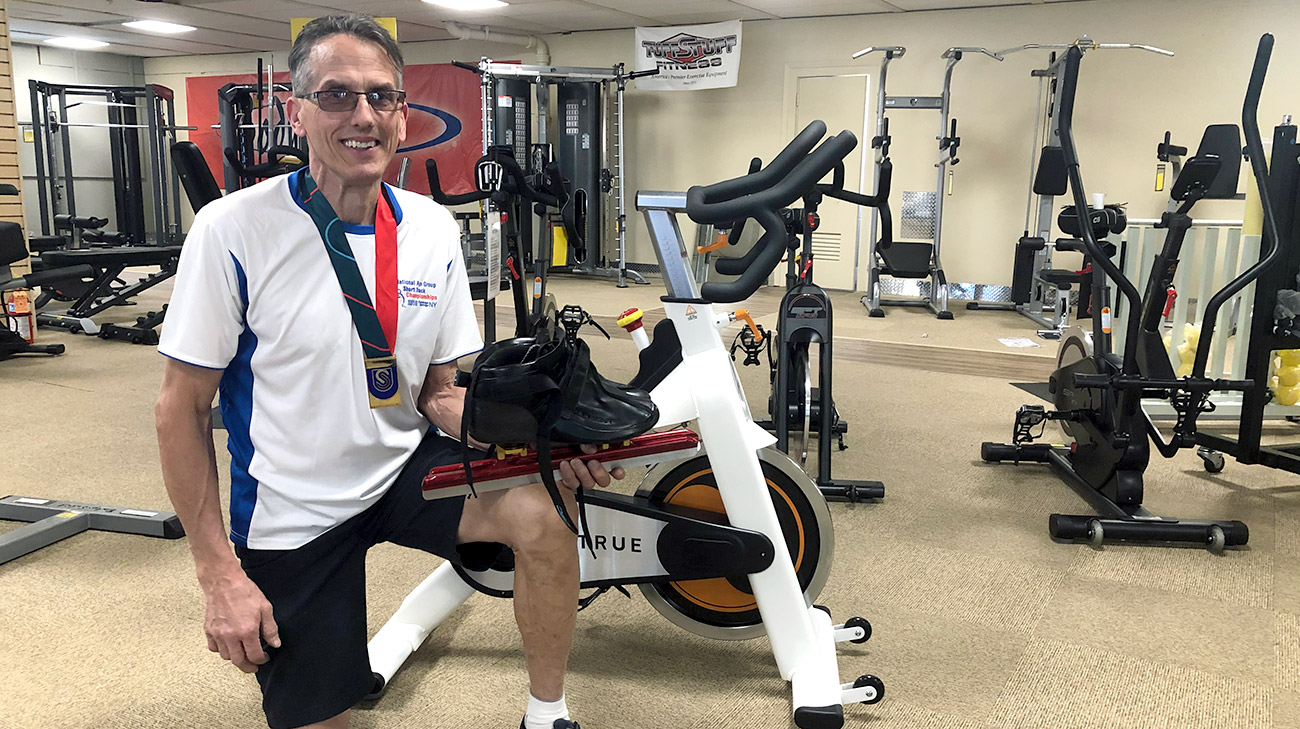 In 2013, Joseph Balbo had knee replacement surgery at Cleveland Clinic. Five years later, at the age of 63, he won the U.S. Short Track speed skating national championship for the Masters Men’s Group 3 (age 60+) in Saratoga, New York. He also set a record by becoming the first person to win the competition with an artificial knee.

A lifelong athlete, Joseph sustained knee injuries beginning in high school, when he played hockey. At that time, treatment involved removing cartilage, a practice that is no longer employed. “For 35 years, I was running around without cartilage in my right knee,” he says.

Still, the Lakewood, Ohio, resident continued competing in and coaching speed skating, as well as enjoying water skiing and restoring vintage vehicles. As owner of a business he started in 1975, which sells and adapts exercise equipment and designs home fitness rooms, he helps many clients with mobility challenges, he says. The solution to his own knee problem also started at his store, when he greeted a new customer — orthopaedic surgeon Viktor Krebs, MD, a member of the Hip & Knee Surgery Program at Cleveland Clinic.

Joseph recalls asking him, “What’s your expertise?” and Dr. Krebs replying, “Hips and knees — and you need one!”

Joseph was impressed. “He saw right away that I was listing to the left when I walked,” compensating for his weak right knee.

Joseph soon made an appointment with Dr. Krebs, which led to the decision to have total knee replacement surgery. Important to his successful outcome, he says, was Dr. Krebs’ advice to ride an exercise bike 10 to 20 miles at least four to five days a week for one month before the surgery.

“It’s absolutely paramount to do the pre-surgery exercise and the post-surgery rehab,” Joseph says. “In my experience, you should never think for a minute that you’re going to get enough help just by going to rehab after surgery and then you’re done. You’re going to live on an exercise bike for the rest of your life, two to three days a week, minimum.”

Although he anticipated a successful outcome, Dr. Krebs says he was surprised and pleased by Joseph’s accomplishment. “To win a national speed skating championship on a knee replacement? You can’t expect that. We’re not telling people to have replacements so they can get back to national-level athletics, but Joseph happens to be a special case. Also, the exercise and competition that he’s involved in do not truly stress a knee replacement.”

Dr. Krebs notes that knee replacement patients can pursue many types of exercise, including speed skating.

“If you have impact load or pounding, like in jogging, you could knock it loose and decrease the replacement’s lifespan,” he says. “But if you’re cycling, swimming, skating or performing other smooth activity, that’s not going to create impact load on your joints. You’ll be able to get back to those things.”

Total knee replacement means replacing all of the surfaces in the knee joint. “When people get arthritis, which is the process of the cartilage wearing off the ends of the bone, the knee degenerates. It becomes painful. It grinds, and it hurts every time you step on it,” Dr. Krebs says. “When we replace it, we replace those bad surfaces with metal and plastic and realign the extremities, because if your knee wears out, it goes out of alignment. When we put the replacement in, we bring the leg and the joint back to normal alignment and straighten people out.”

Most often, what leads to replacement is “general wear-and-tear and arthritis,” says Dr. Krebs, who has performed between 8,000 and 9,000 knee replacements in more than 20 years of practice. Generally, he says, he advises people to seek medical advice “if they have a joint, hip or knee ailment that is keeping them from living life the way they would like to. That’s when they should be evaluated for their arthritis or whatever is going on so that they can get their life back.”

“Knee replacement isn’t like heart surgery. You don’t have to have it to live,” he adds. “But if you have arthritis, you may need a joint replacement so that you can keep moving. It’s an elective lifestyle procedure, and for some, it’s a procedure required to keep them moving and employed.”

Current data shows that a replacement should last at least 20 years, Dr. Krebs says, “and it will probably last longer. As the technology improves, that may increase. And, if you follow reasonable precautions, and take care of your body and stay in shape, it will probably last your lifetime.”

Development of the particular replacement that Joseph received, the Stryker Triathlon Knee, was aided by Cleveland Clinic surgeons.

Joseph’s knee not only carried him through the speed skating championship in 2018, but it nearly took him to the same competition this year. He was packing for the event in Green Bay, Wisconsin, when it was canceled because of the coronavirus pandemic. Although disappointed after all of his hard work and preparation, including purchasing new boots and blades, he says he plans to qualify for the nationals again next time and has not slowed his pace.

“I live on a spin bike three days a week, about 10 miles a day,” he says, “I have never had a stitch of pain from that replaced knee. And I can kneel all day long with kneepads while designing a room. There isn’t anything I can’t do with this knee. And my lap times went down in racing. I’m a lot stronger.”