Throughout the COVID-19 pandemic, Cleveland Clinic – like most healthcare facilities – has restricted most visitors from entering the hospital. However, there have been exceptional cases. Visits to patients who may be nearing end-of-life are one of them. That’s what allowed COVID-19 patient Marzuk (Ron) Chaudry to receive a visitor in early June.

Just 29 years old, and a recent resident of Ohio, the Canada native had been struggling to overcome acute respiratory distress syndrome (ARDS), a life-threatening lung injury caused by the coronavirus and other conditions. Despite weeks on a ventilator, connected directly to his windpipe through an endotracheal tube, Ron had difficulty getting enough oxygen and was close to death several times.

Since, neither his mother nor any of his three brothers could visit, with the U.S./Canada border closed because of the coronavirus, Robin Laughlin Wight (his best friend’s mother) made the journey to his bedside to say goodbye. 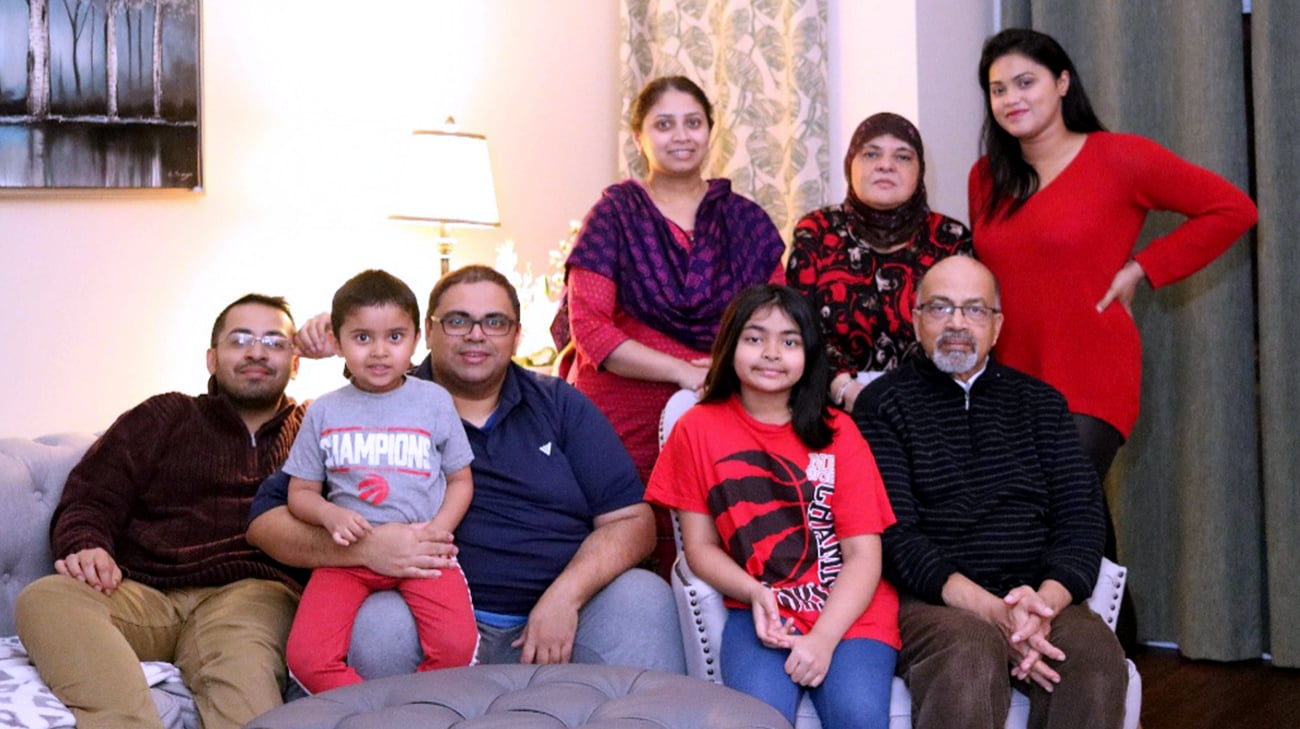 Because of COVID-19 visitor restrictions, Ron's extended family, who lives in Canada, was not able to visit him. (Courtesy: Ron Chaudry)

As Ron would learn later, “Robin was holding my hand and she whispered in my ear and said, ‘Ron if you can hear me squeeze my hand.’ So I guess I squeezed it. She started crying and told the doctors, ‘Look, there’s a sign (of life).’”

The sign proved to be prophetic. After nearly two months of treatment in the hospital, first, at Ashtabula County Medical Center, an affiliate of Cleveland Clinic, and then at Cleveland Clinic’s main campus, Ron finally went home to continue his recovery in late June.

“The (hospital staff) called me a miracle,” says Ron. “They really showed me a lot of care.” 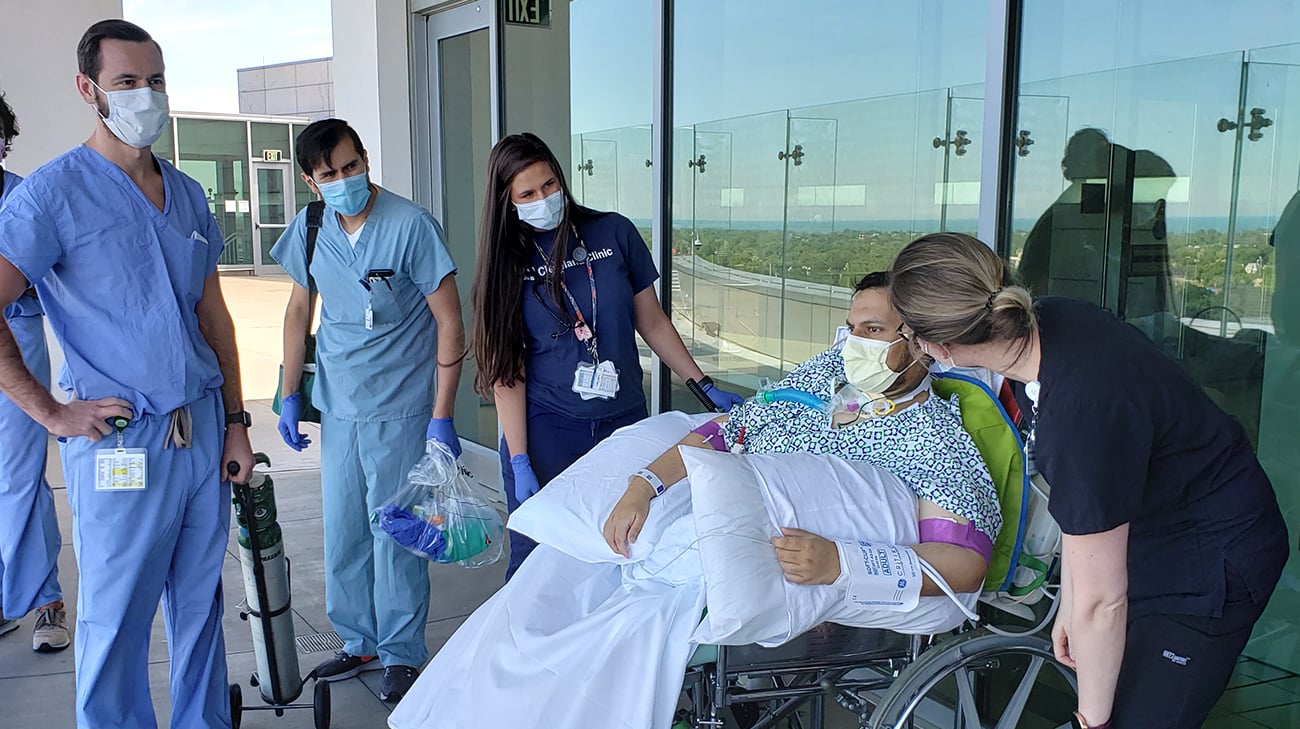 Rachel Scheraga, MD, a critical care specialist with expertise in lung injury and ARDS, says Ron’s youth and relatively good health likely played a role in his extraordinary recovery from COVID-19. “Severe ARDS carries a mortality of about 35 to 45% and his case was very severe,” she explains. “Many people contributed to Ron's care, and I’m happy to play a part in helping him finally get home. It’s why I signed up to do this line of work.”

Ron’s ordeal began in early May when he first noticed symptoms of COVID-19, including a mild cough and shortness of breath. The symptoms worsened and he drove to Ashtabula County Medical Center, where he ultimately tested positive for the disease.

“I’m not sure where I got it from,” says Ron. “It could have been from buying groceries or from somewhere else.”

As ARDS progressed, Ron was sedated and placed on the ventilator. He remembers very little about the next few weeks, including being airlifted by helicopter to Cleveland Clinic’s main campus. What few memories he does have are dream-like hallucinations, a common occurrence among COVID-19 patients. Ron’s often involved what appeared to be hospital staffers.

“In one of them, a doctor came running into my room and was standing in the corner,” recalls Ron. “I hit my nurse button. The nurse comes in and I ask her if something is wrong with the doctor over there. And she says, ‘What doctor?’ It was like a scary movie.”

Even scarier was when Ron went into cardiac arrest, stopped breathing and needed to be revived. According to Dr. Scheraga, the incident was caused by blood and mucus clogging his endotracheal tube, cutting off his oxygen flow. It’s another unusual situation that occurs with some COVID-19 patients. 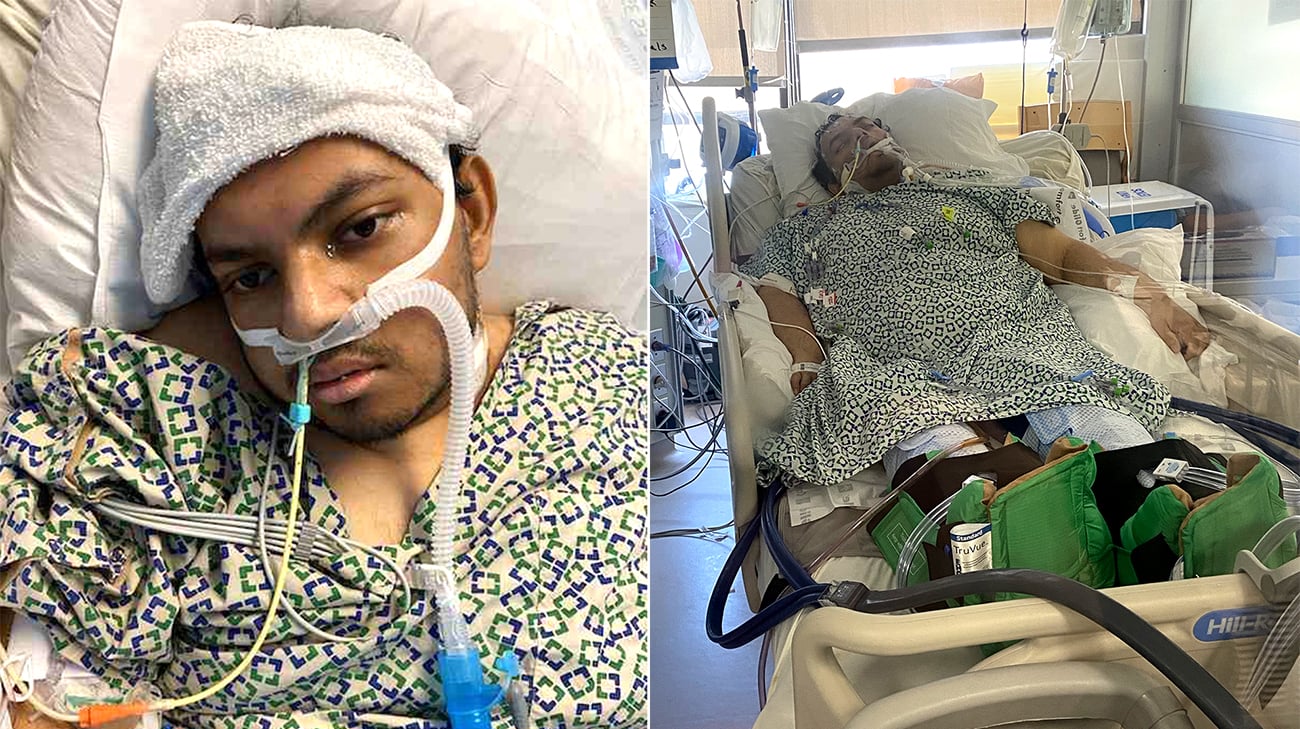 “As a result, Ron’s oxygen got very low and caused his heart to stop,” adds Dr. Scheraga. “We had to do CPR for about an hour to get his oxygen up as much as possible. There was a very low chance he was going to make it through, but we had an amazing team that helped support him.”

Although weak and fatigued, Ron is working to regain his strength and building up his heart muscle through moderate exercise. Grateful for the new lease on life, he is determined to live it fully.

Ron also has some advice for anyone, especially younger people, who may think they’re too young or healthy to catch COVID-19: “You’ve got to follow the protocols: wash your hands continuously, hand sanitize, wear a mask, stay six feet apart, avoid going outside. There’s still a lot of people who take it as a joke, but COVID is real.”