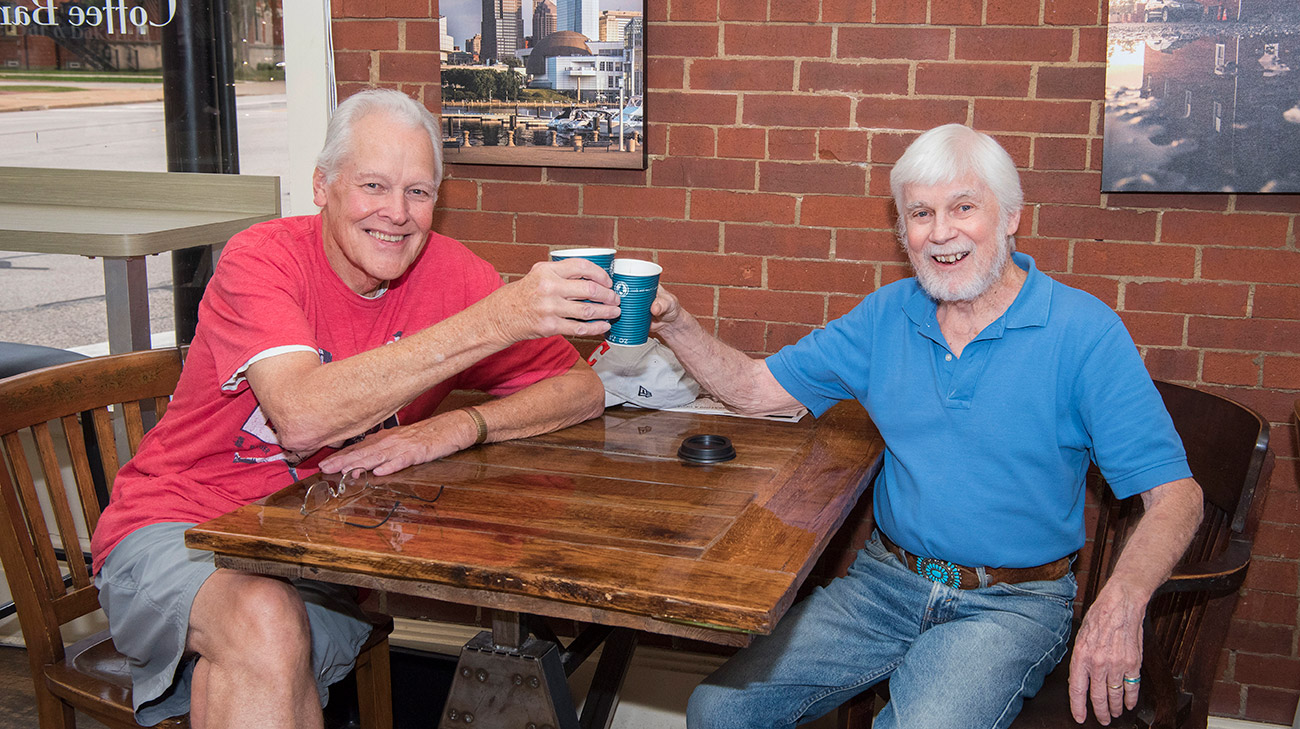 Chuck, a resident of Euclid, thought he was done with prostate cancer. After having his prostate removed in 2005, his prognosis was good. His risk of recurrence was low.

For nearly 10 years, regular prostate-specific antigen (PSA) tests reassured him all was well. But in 2015, a number appeared on his test results: 0.10. Three months later, the number increased slightly — and then again three months after that.

His oncologist said it was possible that cancer cells had remained after his prostate surgery, although they were undetected for years.

The same fear Chuck had felt a decade earlier returned. And it increased when, in early 2019, his oncologist recommended he have radiation treatment, five days a week for seven weeks.

A few weeks into his treatment, Chuck’s anxiety was getting worse. A social worker at Cleveland Clinic Cancer Center asked if he’d like to talk to someone. She referred Chuck to a psychologist at the institute, but also told him about the 4th Angel Mentoring Program.

The program matches patients and caregivers with trained volunteers who have experienced similar situations. Mentors and mentees are matched by diagnosis, gender and age.

“I agreed to that right away,” says Chuck, a retired engineer. “I was anxious to talk to someone who had been through recurring cancer and radiation treatment.”

“I was surprised to see the area code,” says Chuck. “I didn’t expect my mentor to live nearby.”

Chuck called right away. Mike, a Willoughby Hills resident and retired high school teacher, was anticipating the call. The two introduced themselves — both age 76, both widowers, both battling recurrent prostate cancer.

They agreed to meet in person, at a local coffee shop. Thus began a weekly routine that has turned two strangers into close friends.

Mike has had prostate cancer on and off since 1994. In 2014 he had a major recurrence. The cancer had spread to his bones and was deemed Stage 4. Thanks to a regular chemotherapy regimen, his cancer is now under control.

It was Mike’s wife, Jane, who introduced him to 4th Angel Mentoring. She had brought home a brochure after her victory over breast cancer.

“Jane had wanted to become a mentor,” says Mike. “We talked and prayed about it, but then forgot about it when soon after she was diagnosed with lung cancer.”

Jane died in 2011, and the brochure was shuffled among other papers. When it resurfaced in 2017, Mike called the number to volunteer as a mentor.

Since then, 4th Angel has matched him with several men around the U.S. who are being treated for prostate cancer.

“The mentoring starts with one phone call,” says Mike. “Then the relationship takes its own course. Cancer patients have support from doctors, nurses, family and friends. But sometimes they just want to talk to someone who has been through it too.”

Sometimes they talk only once or twice. Sometimes a long-distance friendship develops. But Mike’s mentees were all just voices on the phone — until he met Chuck.

“We talked about cancer and grief, but also about faith and Cleveland sports,” says Mike, who also leads a Bible study at his church and volunteers with a prison ministry.

“I liked him immediately,” says Chuck. “He is so easy to talk to and has such a good attitude. He knows what it’s like to get the news that your cancer is back and to feel the anxiety. I don’t have to hold back anything from him.”

In addition to their weekly meetings at the coffee shop, the two have gone to a Cleveland Indians game. They swap stories about their families.

“Sometimes I call him between our weekly get-togethers if I’m having an especially rough day,” says Chuck. “Mike is always reassuring. He reminds me that there’s hope.”

Mike claims that he’s no spiritual giant, just a guy who has been down the road before.

“Instead of dreading each cancer treatment, you need to view it as one step closer to remission or cure or whatever God has planned,” says Mike. “You’re in there with other people, so share a happy word with someone else. Encourage your nurses. Look at your treatment as an opportunity to bless others.”

“In just three months, Mike has become my mentor, in a cancer sense,” says Chuck. “But he’s also become my psychologist, spiritual advisor and true friend.”

Pictured above: Chuck (left) and his 4th Angel mentor, Mike (right), share many common interests and they support one another as prostate cancer patients.