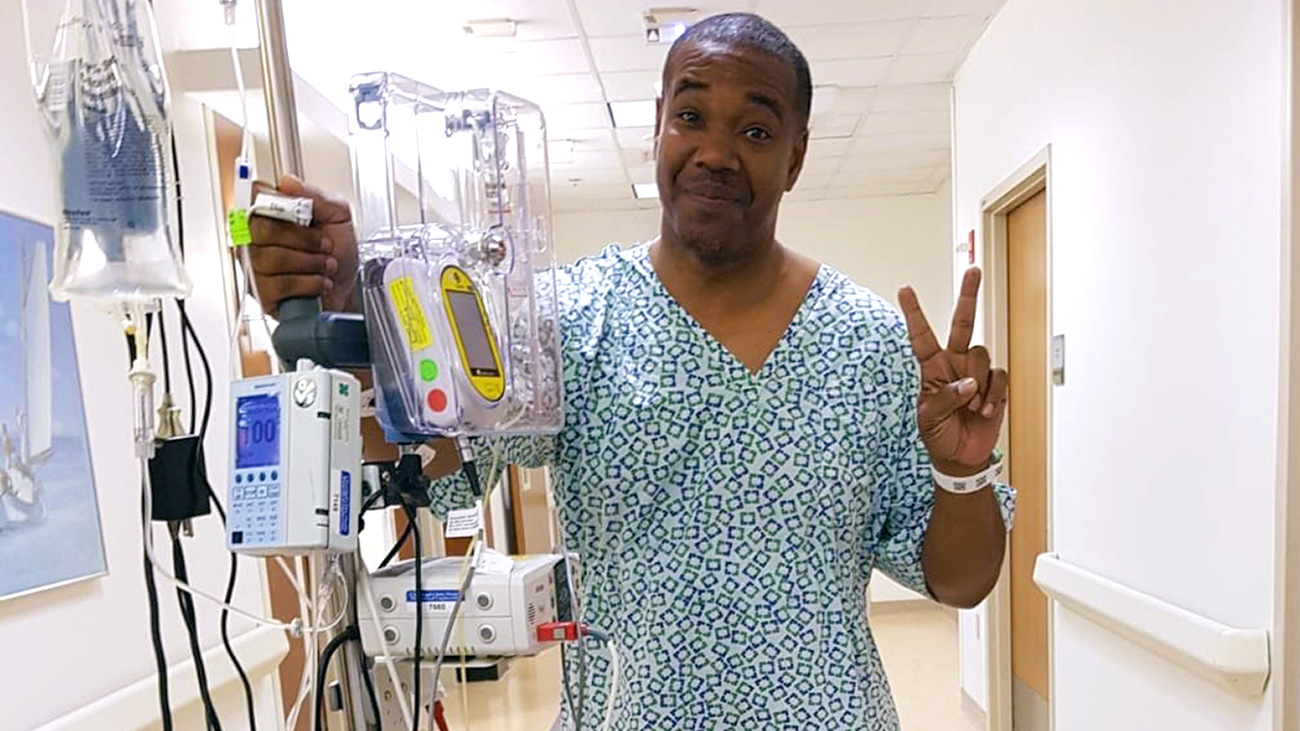 At 46, Philip Simon had it all – the Bahamian dream come true. From humble beginnings, he achieved a Master’s degree, was very involved in his community and chamber of commerce, president of a large development company and the host of Bahamas At Sunrise, a popular local morning news show in Nassau. On top of that, he and his wife of 20 years, Cherry, had three brilliant children. Philip couldn't have been happier.

Then abruptly, he nearly lost it all of it.

Had it not been for a brief mention of a recurring pain in his back during a physical, there is no telling what might have happened.

Philip first felt the pain in the side of his back almost a year before. Because he worked out on a regular basis and because he reported that the pain came and went at random, specialists in the Bahamas initially diagnosed it as a muscle pull or strain.

When he met with a physician at Cleveland Clinic Florida during the physical however, he mentioned the pain again, describing it as the size of a quarter. The examining physician immediately looked up and Philip could see the expression of concern on their face.

“Cleveland Clinic was wonderful. They were with me every step of the way. I think they found almost all of the nicest people in the whole world and put them in one place at Cleveland Clinic.”

“Why don’t you go do an ultrasound?” the doctor suggested. Within the first hour, Philip felt someone was really paying attention. He was whisked in and the ultrasound was completed. A few hours later he got a call with the results. “The assistant on the other end said, ‘We’ve got the results from your ultrasound and we would just like you to do a CT-scan to get more clarity.”

Philip changed his return flight, received and followed the instructions from Cleveland Clinic to prepare for the morning test, underwent it and flew back to Nassau. After landing, but still on the plane, he powered his phone back on it rang. It was the doctor. “I’d like to talk to you about your scans,” he said. “I told him I had just landed and was back in The Bahamas.” The doctor clearly did not want to elaborate over the telephone, and Philip could hear urgency in his voice. Philip promised to return as quickly as he could.

Early the next week, Philip and Cherry Simon flew to Florida. Once Philip had completed the remainder of his physical that had been interrupted by the ultrasound, he and Cherry found themselves face to face with Barbara Ercole, MD, a renowned kidney specialist. “She was terrific,” said Philip.

Over the next hour, she walked the Simons through images on the light box, presenting the pictures of a normal kidney and what his looked like with the mass on it. “You could see it clear as day, just sitting there like it belonged,” he said. The mass had to come out but, because of its size and where it was located, laparoscopic surgery was not an effective option. They would have to open him up.

“She spent an hour with us and explained so carefully, took us through everything from A to Z. It was as if she were teaching and my wife and I were the only two students in the class. Because the mass was pressing against two arteries, she explained the risk with laparoscopy — if the instrument touched or punctured an artery and the surgeon was just looking at it through a monitor, they wouldn’t be in there to stop the hemorrhaging immediately.”

Philip and Cherry talked over the options — leave the mass as it was and pray that it was not and would not become malignant; take out the entire kidney; or attempt to remove the mass and whatever part of the kidney that would have to come with it.

Philip also knew there would be post-operative restrictions that would alter his daily life and the active lifestyle that he and his family enjoyed. He would not be allowed to lift anything heavier than 10 pounds for the first eight to ten weeks and the only significant exercise he would be allowed to do would be to walk.

“There was this whirlwind of emotion. The results of my physical were excellent except for this one little big thing that could potentially kill me,” he said. “I was in denial. I worked out three times a week. I don’t smoke. I am the fit one. Why is this happening to me?” 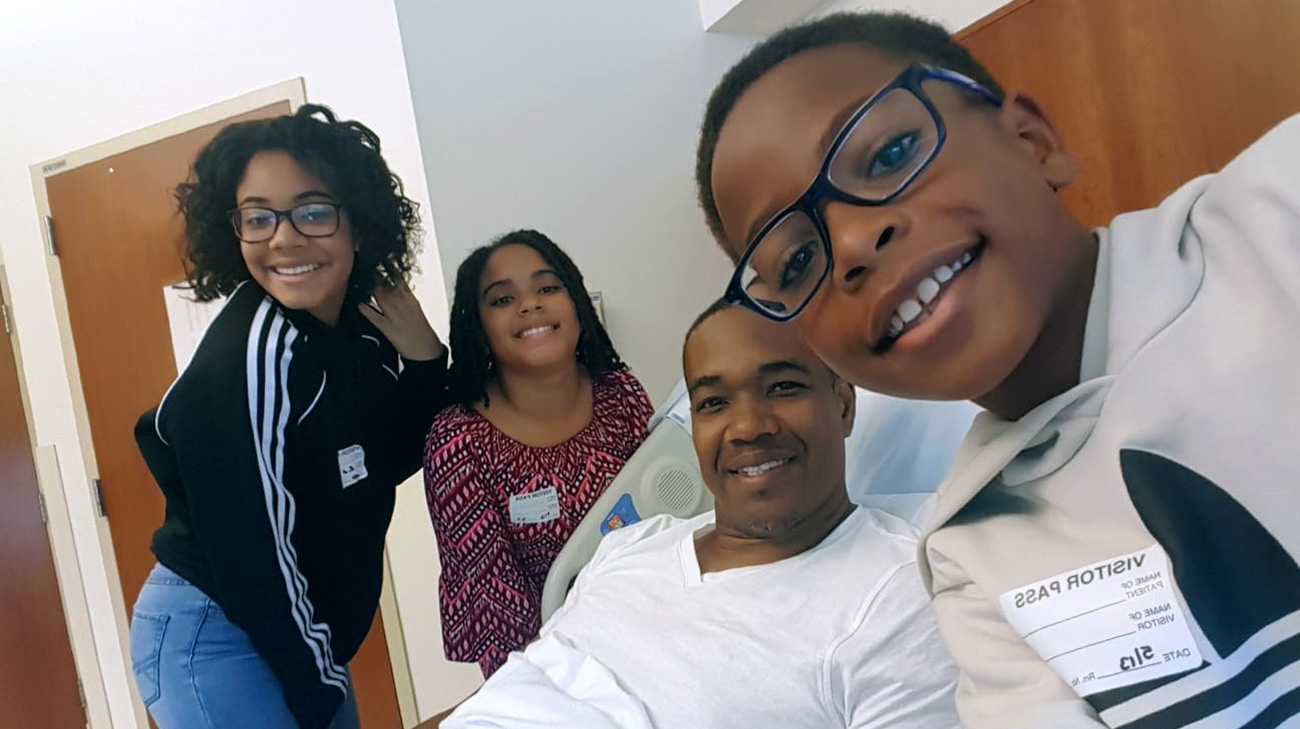 Philip Simon and his children.

Philip had to then decide how best to inform his children about the surgery. He sat them down and planned to spend as long as it would take to explain what was going on inside Daddy’s body. Philip's kids immediately understood the urgency of the situation and his oldest daughter took it upon herself to keep a folder with every picture, every report, every conversation she could record between the time Philip was diagnosed, had his surgery and was home recovering two weeks later.

When the date of the surgery started to get closer, Philip began to get anxious about the thought of being away from his family for weeks. However Dr. Ercole's confidence and determination gave Philip the reassurance he needed.

On May 4, Philip underwent a partial nephrectomy at Cleveland Clinic Florida's main campus in Weston. The surgery lasted four and a half hours and the next day, he was up and walking again, this time with the help of a walker.

The mass is now gone, along with half a kidney, but Philip is back at work in his hometown. Every day, he is thankful for the love shown by his wife, who stayed with him throughout the two weeks following surgery; his mother, who spent one of those weeks with them; and his children, who kept a diary of his medical trials and triumphs. But mostly, he says he is grateful to God and for the medical care he received.

“Cleveland Clinic was wonderful. They were with me every step of the way. I think they found almost all of the nicest people in the whole world and put them in one place at Cleveland Clinic.”

His counsel to others – do not ignore the pain. Even a random, recurring pain that seems more nuisance than dangerous can be life-threatening.

“Real men,” says Philip, “do get physicals. One saved my life. It could save yours too.”