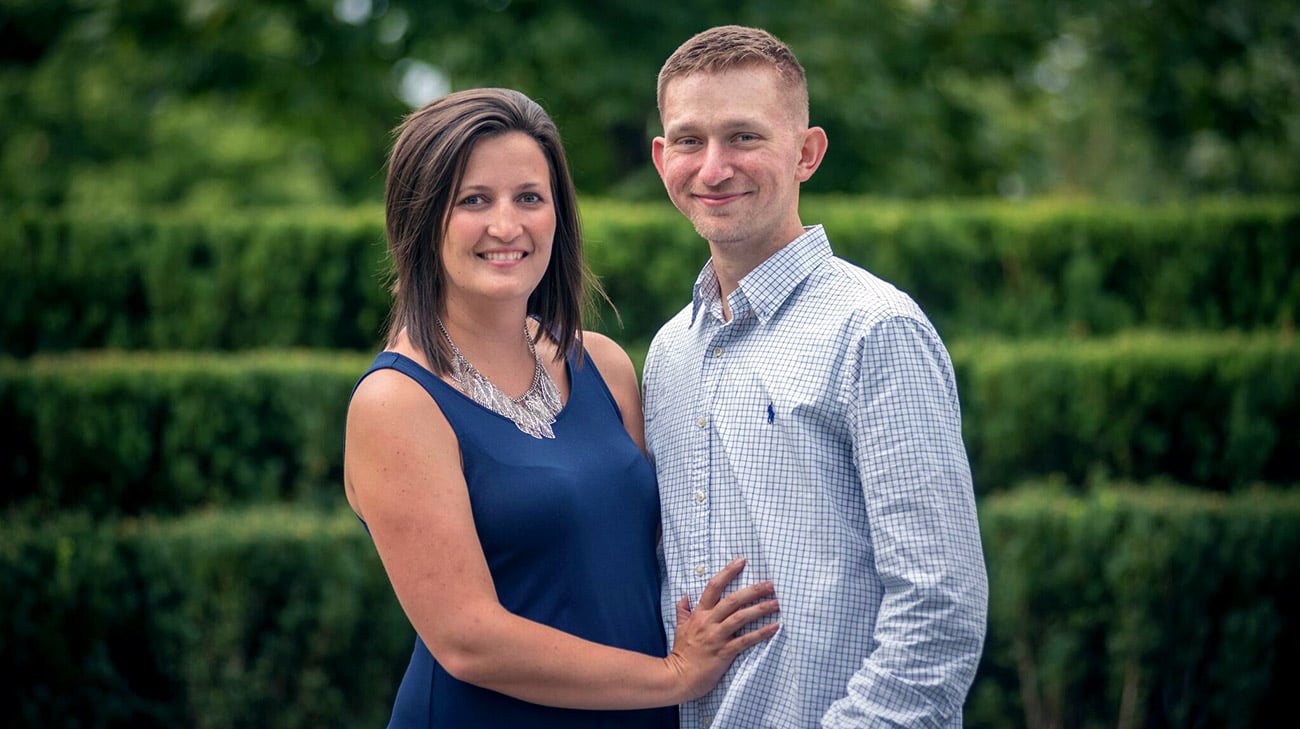 After months of pain and sickness, Justin Singer was diagnosed with epithelioid hemangioendothelioma (EHE), a rare form of sarcoma.

Often, that knowledge will bring some relief to patients and families, so they can begin, in earnest, their battle to fight the disease. But at least initially, the diagnosis brought no comfort to Justin, age 29, and his wife, Morgan.

“Once we found out, it didn’t really help too much because EHE is so rare. There’s not a lot of information on it,” said Justin, an electrical engineer who lives in the Dayton suburb of Centerville. “We had no clue what was going to happen: do I have a month to live? Years to live? There’s no standard treatment.”

Not yet, anyway. Fortunately for the Singers, their online research led them to a Facebook group for patients of EHE. And over and over, one name kept appearing – Brian P. Rubin, M.D., Ph.D., Chairman of Cleveland Clinic's Robert J. Tomsich Pathology & Laboratory Medicine Institute.

Dr. Rubin, a world-renowned pathologist and medical researcher, is an expert on EHE, a type of cancer that arises from the lining of blood vessels. It can appear almost anywhere in the body, most commonly in the liver, lungs and bones. Annually, only about 200 people – typically teenagers and young adults – are diagnosed with the disease.

When Morgan – anxious for answers about her husband’s rare condition – called and left Dr. Rubin a message, they were pleasantly shocked when he called back later that day.

“Most doctors don’t call you, especially when they don’t know you,” noted Morgan. “But he called us right back and answered all of our questions. Dr. Rubin and the other specialists aren’t intimidating. They’re comforting and make sure you understand what they’re saying.”

According to Dr. Rubin, a doctor’s busy schedule can sometimes make it difficult to be immediately responsive to patients, but he strives to make it a priority. “Patients with rare cancers feel alone since so few doctors know anything about them,” he explained. “It is especially important for them to get access to content experts, as it may be their only way to get even the most basic information about their cancers.”

In addition to providing details about EHE, Dr. Rubin also arranged an appointment for Justin with Dale Shepard, M.D., Ph.D., a physician within Cleveland Clinic Cancer Center, who now serves as his primary oncologist (in tandem with a local physician, closer to home, in Centerville). 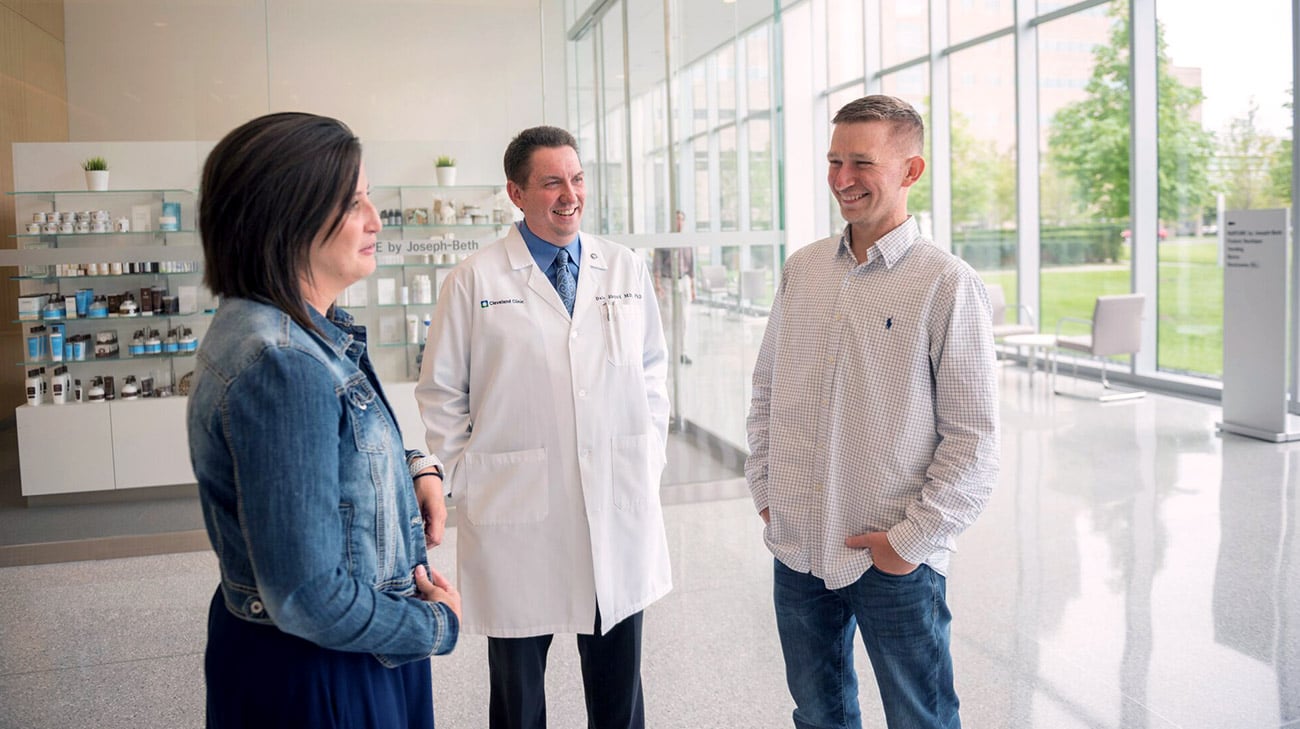 Dr. Shepard noted that such an arrangement isn’t unusual for the Cleveland Clinic. “We have a multidisciplinary team here that treats sarcomas, including EHE. So, it’s not unusual for us to see a patient like Justin, come up with a diagnosis and a good treatment plan, and then work together with his local oncologist to make it more convenient when the patient lives far from Cleveland.”

According to Justin, Morgan’s role in his medical journey can’t be understated. Initially, Justin – assuming his flu- and bronchitis-like symptoms would eventually pass – was slow to seek medical treatment or a second opinion. But when his problems persisted, Morgan, as she described it, “nagged and nagged and nagged. You can’t be on that many antibiotics and still not feel good. He just wasn’t getting better.”

Cleveland Clinic’s recent national men’s health survey found that spouses/significant others play an influential role in getting men to take their health seriously.

By the time Justin’s “flu” evolved into a collapsed lung that required emergency surgery, his doctors in Dayton at last unearthed the cause: EHE. And they urged him to contact one of the few facilities with expertise in the field, which led them to Cleveland Clinic and Drs. Rubin and Shepard.

Initially, the team prescribed a more conventional form of chemotherapy. But after the initial phase of treatment, his tumor actually grew in size. Luckily for Justin, he was then eligible to participate in an ongoing EHE-specific clinical trial. 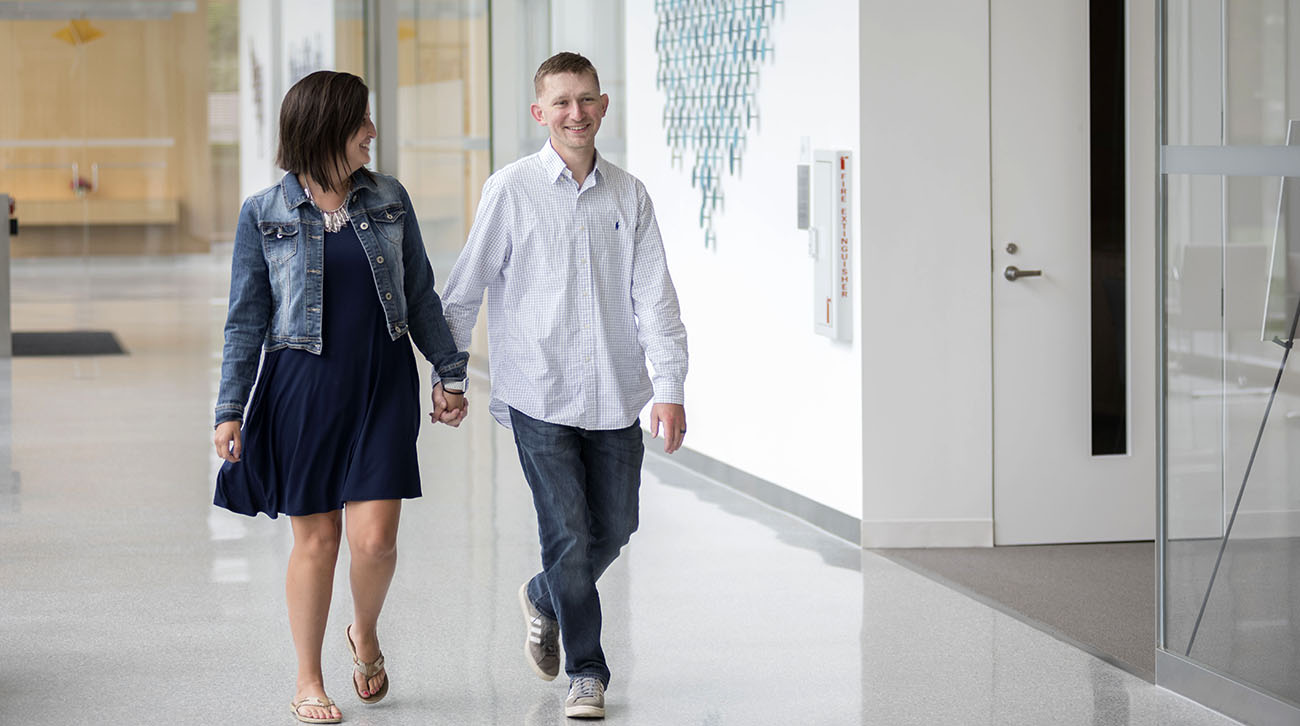 Dr. Rubin is helping lead the trial which he also designed based on pre-clinical data developed in his laboratory that tests the efficacy of a drug — trametinib – that has previously been approved by the U.S. Food and Drug Administration for melanoma.

Justin recently completed his initial round of the oral treatment. Despite an annoying side effect, a rash covering most of his face and scalp, and occasional fatigue and nausea, the drug has worked well on Justin. His CT scans revealed the EHE in his lungs, liver and spine had stabilized, and showed no signs of new growth. “We’re pretty excited about that,” Justin said.

Dr. Shepard said the hope is the tumors will get smaller as Justin receives additional treatment of trametinib. In any event, he’s sure he’ll be hearing from Justin and, especially, Morgan with additional questions throughout the process.

“Morgan has been great. I regularly get messages from her as they seek more answers,” Dr. Shepard noted. “She’s been a real advocate for Justin.” 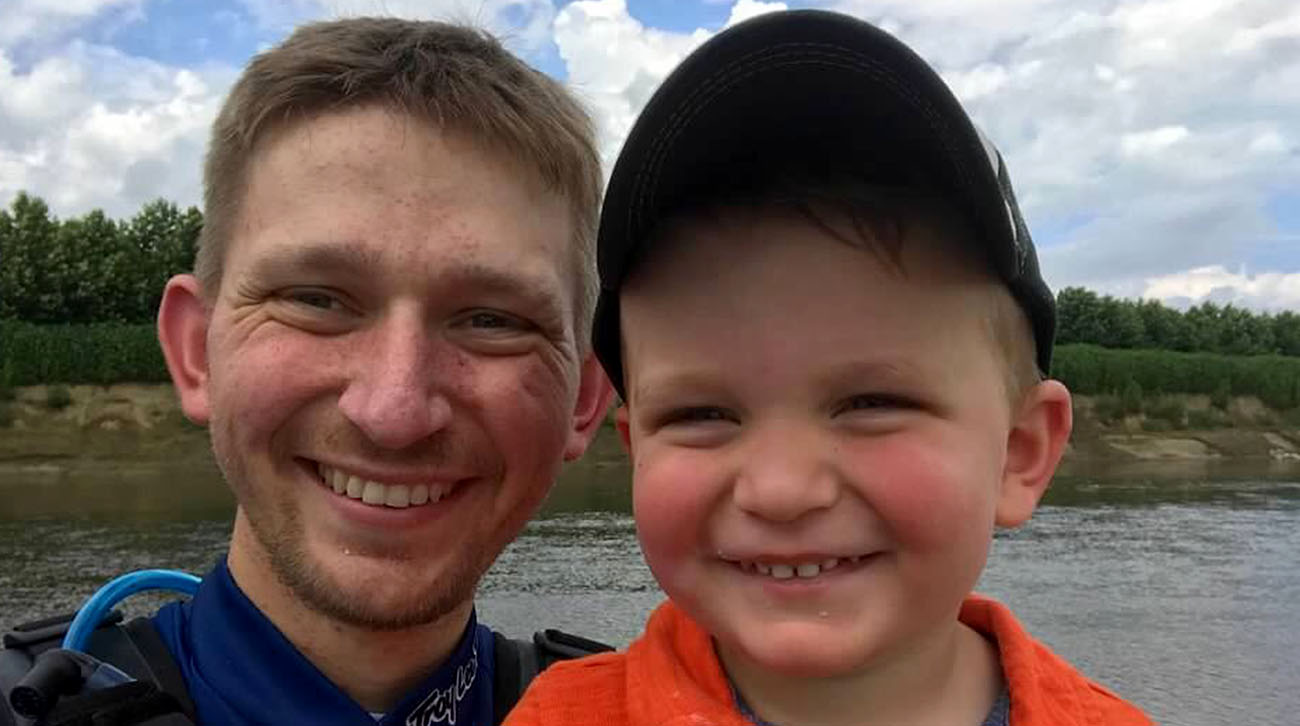 Justin and his wife Morgan have a 2-year-old son, Carson. (Courtesy: Justin Singer)

While the future remains uncertain, Justin and Morgan – who are parents to a 2-year-old son, Carson — are optimistic they’ve found the best treatment possible for EHE at Cleveland Clinic. And Justin believes the Clinic’s “patient’s first” approach to patient care should encourage men, like him, to be more proactive in seeking treatment.

“Before I make a trip to Cleveland, I get anxious. There is so much unknown about EHE,” explained Justin, who recently returned to work after being off for several months. “But after I speak to the doctors, it calms me. I feel a lot better because I have so much confidence in them.”