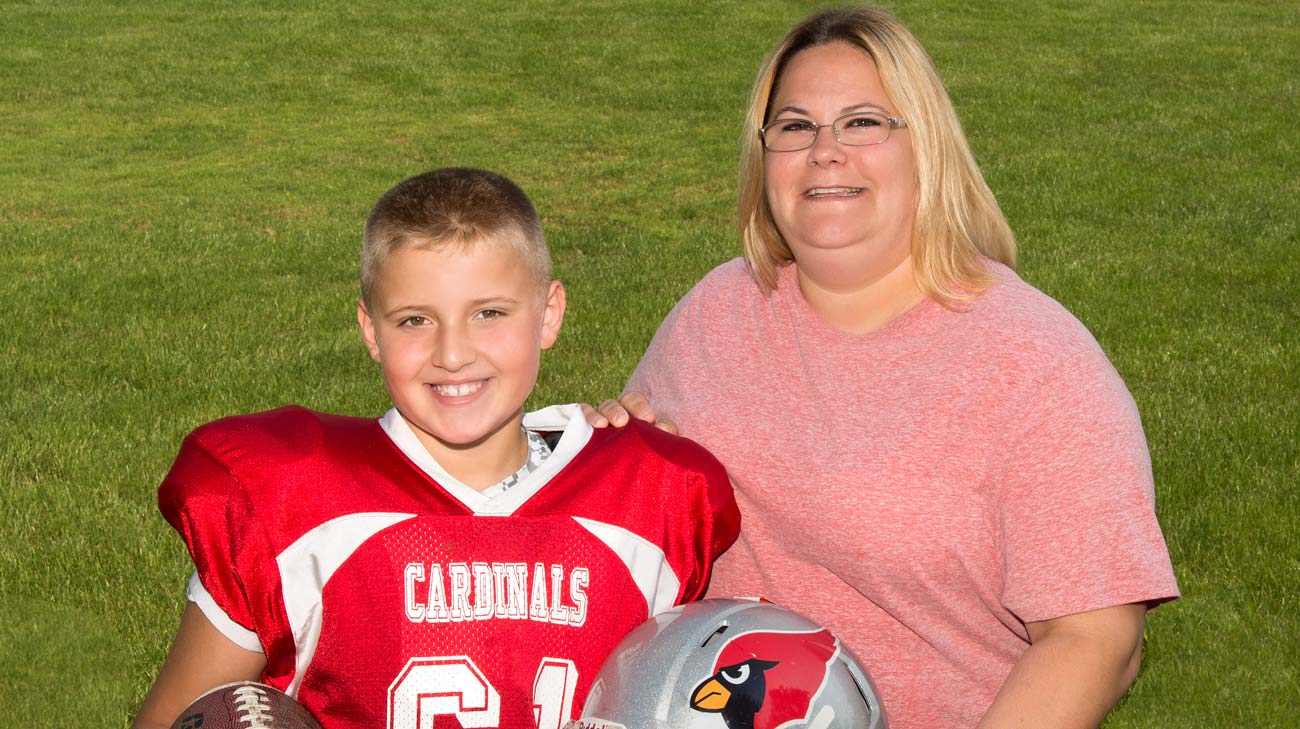 A true Cleveland boy, 8-year-old Giuseppe “Jojo” LoDuca, adores the Indians and Cavaliers. But, he loves to play with his Mentor baseball, basketball and football teams even more than watching his favorite Cleveland ones.

“This past year, Jojo kept getting strep throat and enlarged tonsils. Being sick so often seemed to easily tire him out,” says his mother, Samantha LoDuca. “He just wasn’t his energetic self. He’d be exhausted after playing one game which was out of the ordinary for him.”

Jojo missed about 10 days of school because of his constant strep throat issues that brought on cold-induced asthma. “I was just sick all the time,” says Jojo.

“I told Dr. Hopkins that Jojo was constantly coming down with strep and he never seemed to fully get better. He was snoring, sleeping a lot and had enlarged tonsils,” recalls Mrs. LoDuca.

Because Jojo’s tonsils and adenoids were causing his issues, surgical removal was necessary.

Jojo’s outpatient surgery at Cleveland Clinic Beachwood Family Health and Surgery Center went well. And after eight to 10 days – and a few quarts of ice cream and a couple of boxes of popsicles – he was back to normal.

A month after surgery, Jojo’s follow-up appointment was conducted over the internet. “Neither of us ever had an online appointment before. This was new to us,” says Mrs. LoDuca.

“Online medical appointments enable you to see a caregiver for health issues where a physical exam or medical equipment are not necessary, and visual and verbal communication are all that’s needed,” explains Annie Banas, CNP, a pediatric nurse practitioner at Cleveland Clinic. “They’re beneficial for problems such as allergies, ear infections, rashes, urinary tract infections, cold and flu.”

"The appointments are so convenient and are such a timesaver... I think Jojo really liked it because he didn’t have to get dressed and brush his teeth."

After completing a few more steps, Mrs. LoDuca and Jojo were placed into a virtual waiting room where Mrs. LoDuca said the wait time was only five to 10 minutes.

Once the LoDuca’s were connected with Mrs. Banas, they discussed the surgery, the recovery and how Jojo was feeling. During the appointment, Mrs. LoDuca held the phone so Mrs. Banas could see Jojo’s throat. “It was kind of weird when my mom held her cell phone up to my mouth. I had never had that happen before. It made me laugh,” remembers Jojo.

Many Cleveland Clinic physicians use virtual visits to see select patients for follow-up care. “The appointments are so convenient and are such a timesaver,” says Mrs. Banas. “Patients who would like to explore online appointments should ask their providers if this is an option for them.”

Both Jojo and Mrs. LoDuca liked the online appointment because it was easy and took less time than a regular office visit – since there was no travel involved and the waiting room time was minimal. “I think Jojo really liked it because he didn’t have to get dressed and brush his teeth,” jokes Mrs. LoDuca.